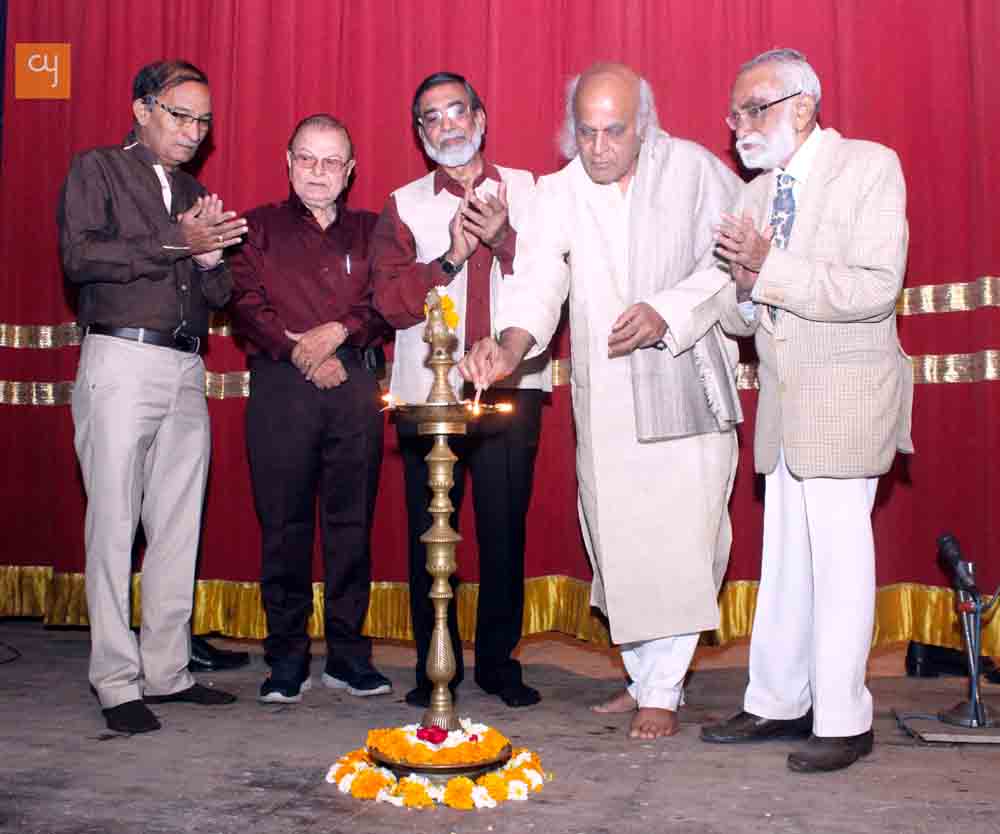 Drama in recent years at the all-Gujarat inter-collegiate One-act Competition being organised by Gujarat Samachar Trust and INT (Mumbai) for twenty-nine years has assumed social identity.  All the three plays on the opening day at its two-day Finals on Thursday focused on specific social issues. Ghodiya-no Vesh  (HK) stood out with a balance between informed inputs on the issue and its good dramatic treatment.

Power even in a democracy today is seen not remaining accountable for its acts, particularly violent ones.  Give a dog a bad name and kill him becomes a regular practice. Such action on Naxalites has often been suspect. Suspense remains, but there is no central conflict in the play Ghodiya-no Vesh through the tense interaction between a tribal woman cradling her baby and three unexpected visitors coming one after another – a young tribal, an educated activist and a policeman – one rainy night you get to know the plight of  Naxalites. 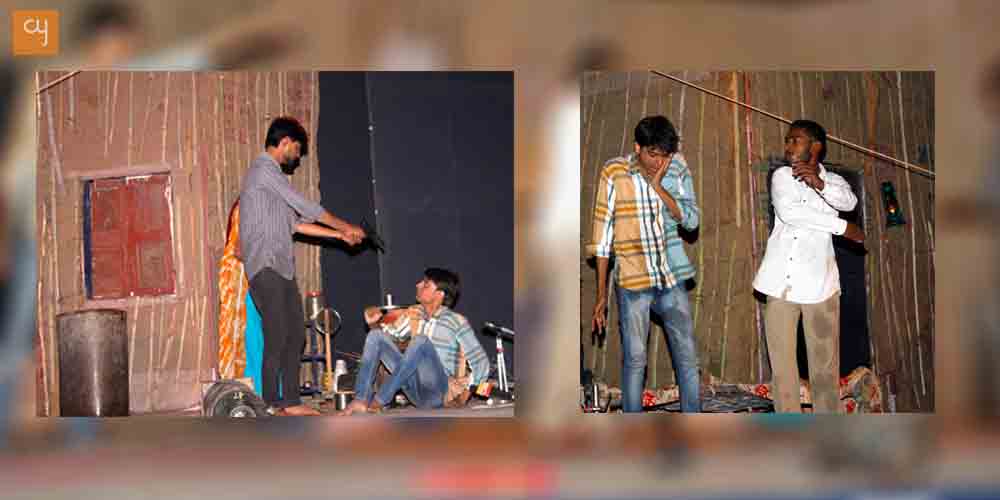 Young writer-director Maulik Raj Shrimali develops a subtext and suggestions in the factual narrative and transmits them to the reality he creates on the stage. The lantern has not been put out ever since the woman’s husband had been taken away by the police. Initially, the lullaby line ‘sapnaa-ne odhi le baathmaa-n in its dim light in the silence of the hut turns to a prayer ‘raat-ne tu-n odhi de aankhmaa-n’ at the end as much for the hapless newborn as for the young tribal fleeing through the window. The body of his sister back home got charred in the home she belonged to. Another life drops dead here in the hut. Many went unreported at the meeting where firing took place. Such is the inhuman treatment of human lives. The young man had said: it’s we who are reacting. Have you cared to understand us? 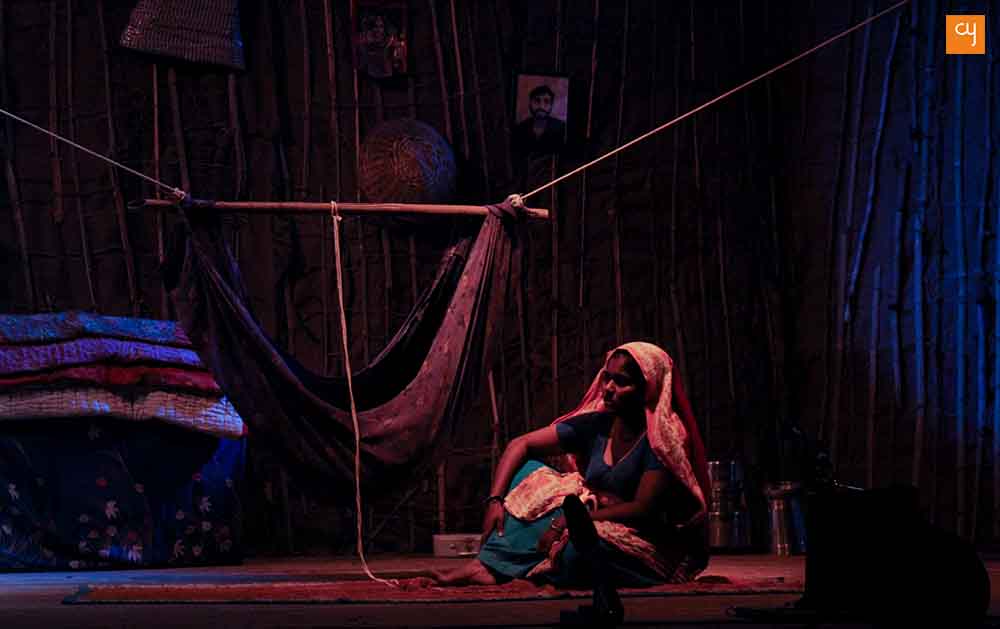 Darkness becomes a metaphor in the play. So does the lantern. The ‘civilized’ intruder, allergic to the life here, projects the conflict in real life. The dialect underscores our unfamiliarity with this alien world. Its members speak with their voice raised and with relatively long pauses, but with the pain underlying their existence getting expressed they remain agreeable. The director builds welcome contrasts. The only girl in the play offers a bold and convincing portrayal of an adivasi woman. 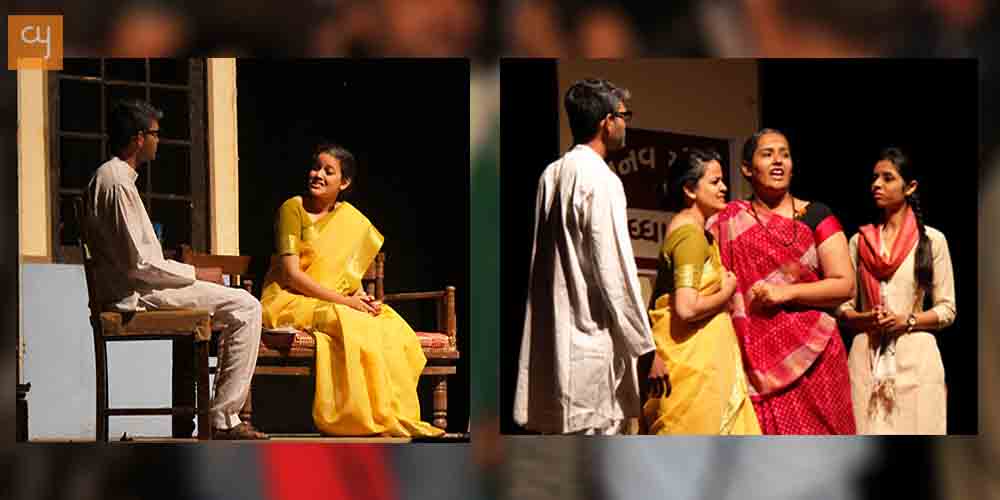 Young players in ‘Aathamane Ajawaala-n’ (Naranlala College, Navsari) patiently depicted lives of elderly persons at Jivan Sandhya, neglected by relatives, and developed empathetic understanding of them. The writer -director endeavours suggesting a break with the conservative attitude to such persons. Raising a plant together even in autumn becomes a welcome symbol. Mere network doesn’t help, connect – is a welcome message. The idea stressed is that there is the need to live one’s own life irrespective of how others treat or look at you. Reassuringly it is a woman, Shubha, portrayed with natural charm, who sees the value of living ‘my life’. The young girl at ‘Jivan Sandhya’ also shows a way by devoting herself to an artistic pursuit. 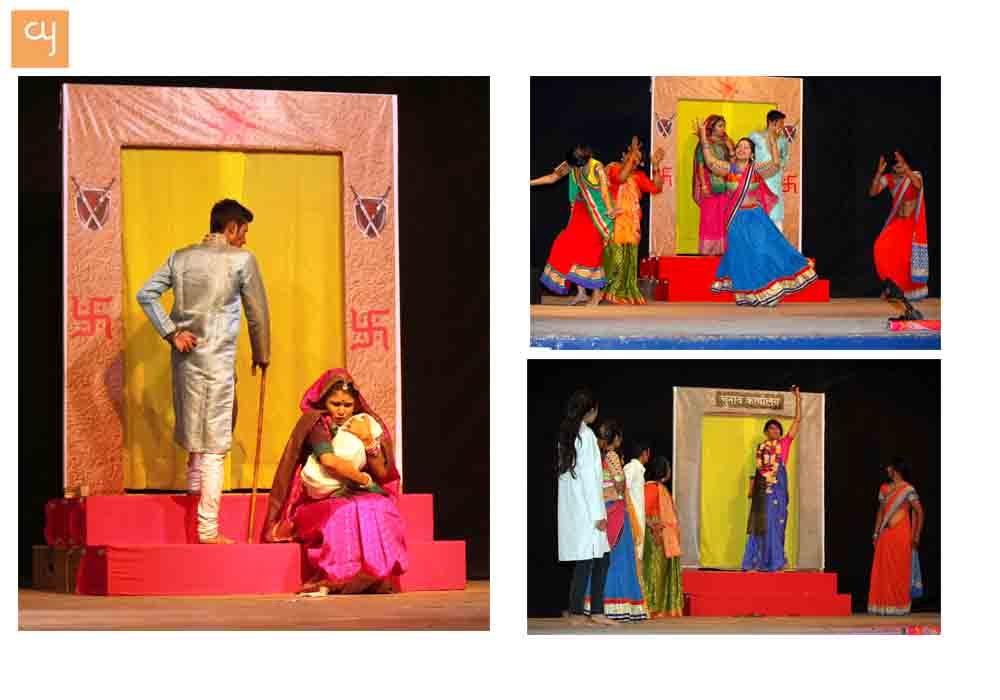 Society’s antipathy to kinnars (eunuchs) and the trail one of them blazes through independent thinking, the decision to be a leader and success in winning an election is sought to be projected in ‘Nirja Maasi’. The theme, partly treated even at this competition earlier with research and sensitivity, is not new and the performance has its limitations. Most glaring among them is the uninformed use of voice. Even the director of a theatre group in the play is irritatingly loud and melodramatic. The players in the other two plays demonstrated how voice drawn from within can express any emotion with control.