Arpita Dhagat, as I know her, has a brain brimming over with creative ideas and tends to not settle for anything unchallenging. She had prestigious acting prizes before she went to NSD for Design and Theatre Techniques. On returning, she remained busy working freelance remarkably well – doing light designs, costumes and so on. Those who know her expected a surprise by way of a production. And, here she is with an innovative theatre experience in Fill in the Blanks.

Ambitious as she is, she held two consecutive shows of it at the renovated Visual Arts Centre earlier during the week. It was attempted to be an immersive theatre performance with pretty little of that element in it though. Presented at the H. K. College auditorium last Wednesday evening, it emerged as a significant theatre production though many viewers struggled to find meaning out of it in the conventional sense. 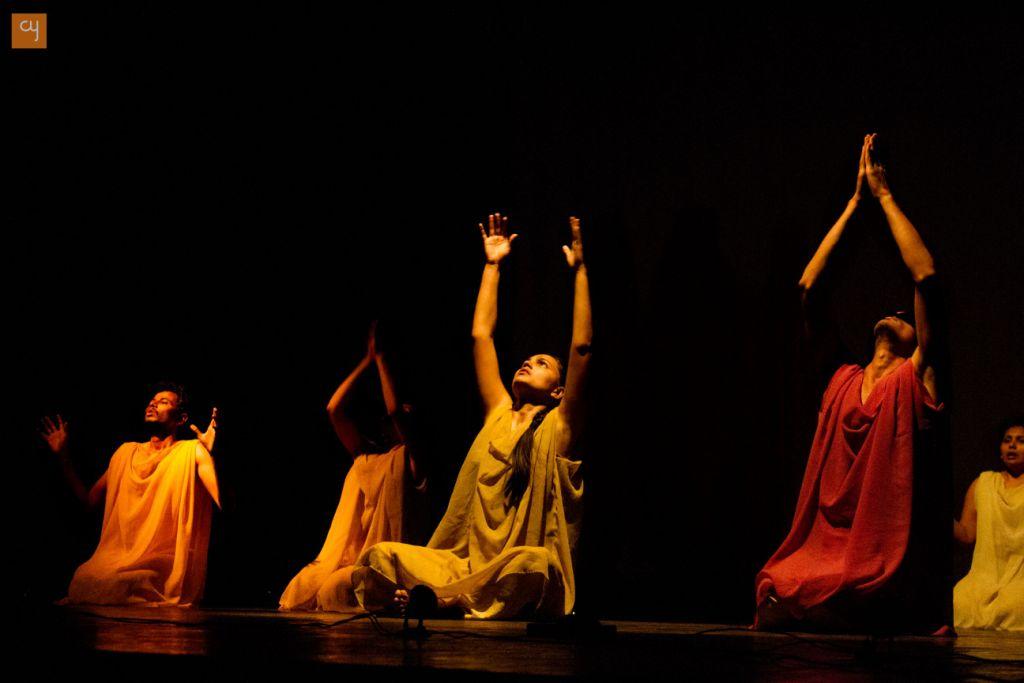 It is heartening to see that a budding stage director, fresh with training at NSD, refuses to settle for conventional theatre and financial viability. She has as players a Bharatanatyam (Pooja) and three Kathak dancers (Kadam, Dhruti, Manasi), two stage actors (Mangal, Karan) and a percussionist (Sapan), who speak but rarely, and with resourcefulness based on their specialisation expressively respond to the stimuli provided. The stimuli emanate from Hellen Keller’s poem ‘A Chant of Darkness’. I wish the viewers knew the lines.

‘O Dark! Thou awful, sweet, and holy Dark!’, an invocatory line of the poem runs. (Recall Umashankar Joshi’s ‘Nisheeth Hey! Nartak Rudra Ramya!)  It talks of the universe of Helen Keller, deaf and dumb but sensitive, and many like her. Their shapeless world has only one colour and innumerable sounds. The vibrations are heard by their eyes and feet and hands. Responses are made by hands and feet and the body in convulsions. By the mouth agape, exhaling and inhaling, unable to speak. The perceptions received in the dark and expressed by the performers grow rhythmic and attain artistic lines through the respective creative impulses of the performers.

It’s a long poem in three units. One, in which the poet, though ‘banished to our solitary isles’, with equanimity accepts God’s will: ‘With Him is strength, With Him is wisdom.’ Echoes of Milton’s ‘Who best / Bear His mild yoke, they serve him best’. Two, in which imagination unfolds vision in the dark:  ‘Imagination hath a luminous eye, /And the mind hath a glorious vision.’ The third unit brings in the poet’s perceptions of the universe with improvised senses. The mood culminates in the words ‘Dark, gracious mother! Like a dove, / I rest in thy bosom.’ 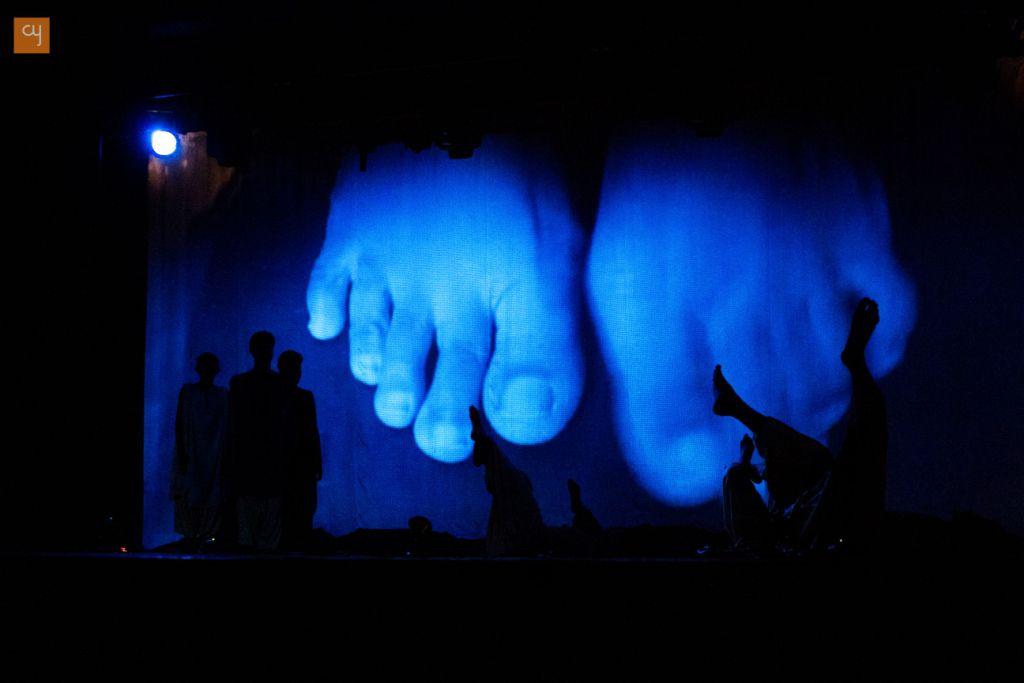 The charm, both of the poem and the performance, is in the glimmers of meaning beyond sensory perceptions it unfolds. The concluding lines lift the reader from the mundane specifics and transport him to deliberations on the origin and destination of human journey:

Out of the uncharted, unthinkable dark we came

And in a little time we shall return again
Into the vast, unanswering dark.

The lines are reminiscent of Mathew Arnold’s concluding lines in his famous poem ‘Dover Beach’:

And we are here as on a darkling plain

Swept with confused alarms of struggle and flight,

Where ignorant armies clash by night.

Arpita Dhagat’s Fill in the Blanks, along with inputs to it in terms of lights (Vaishakh), music (Nitish) and tiny translations in Gujarati (Priyank), Hindi (Priyanka) and Marathi (Mangal) is a bold welcome experiment, modestly successful. Under Anjana Puri’s guidance, it explores sounds, shapes and communication in an innovative style. In doing so, it evokes ideas from the realms of literature and metaphysics. It is a collaborative performance. There could have been an option of seasoned performers giving the performance a more defined character. Not wanting in guts, however, the dedicated young performers shape themselves pretty well by the third show. 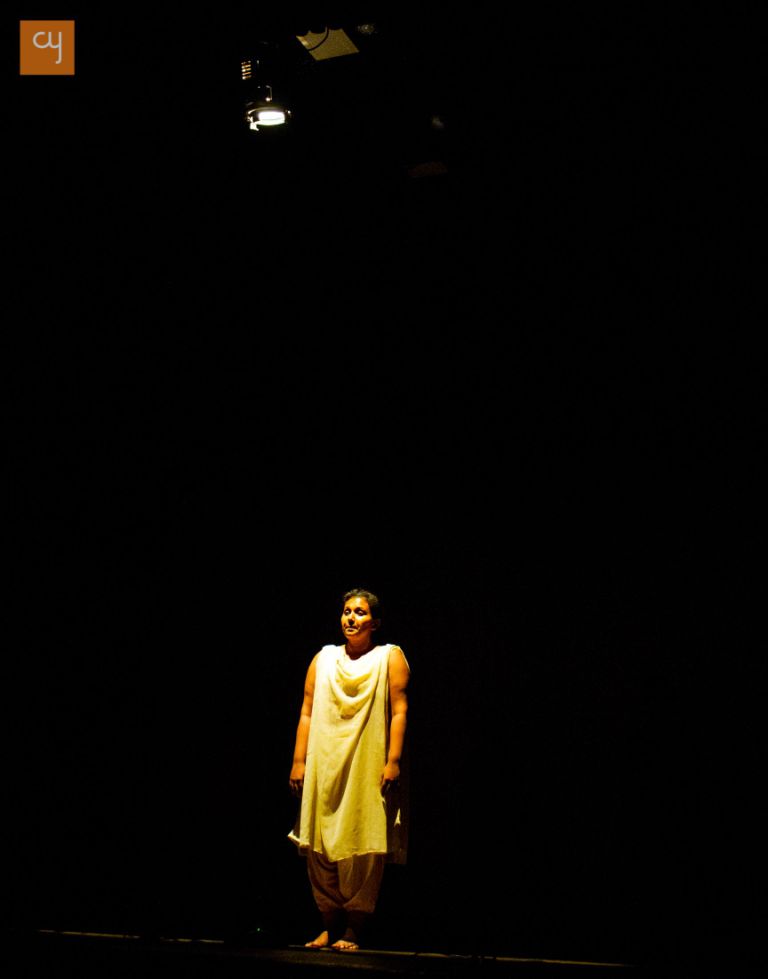