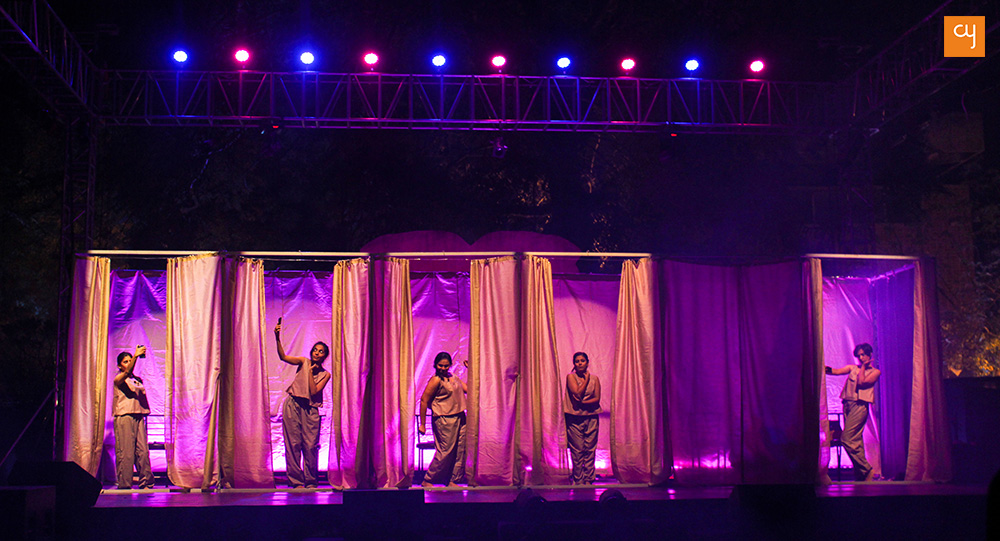 Questioning everything we’ve learnt from Indian cinema, ‘Item’ at Abhivyakti Festival takes a hard look at the role we play in adopting aspects of our toxic ‘pop culture’ into society.

It all began as Amitabh Bachchan uttered his classic monologue in Deewar, “Aaj khush toh bahut hoge tum”. As Bachchan goes on to list the virtues of his ever-sacrificing mother, in one fell sweep, the ‘adarsh naari’ is established in the masculine eye for posterity, without us even realising what’s happened. Further spitting in the face of the Anjalis and Rahuls in Bollywood love stories, the play Item breaks down and analyses the many Shah Rukh Khan movies we have known and loved, where women only sit around waiting to be loved, to be completed by men.

Actor Arpita Dhagat is no stranger to breaking stereotypes, with the plays Fill in the Blanks and Selfie in her repertoire. She twists and turns stereotypes to present them to us as works of art, unrecognizable in their new avatars. Item follows the same pattern, on a scale that is bigger, and it hits where it hurts the most.

If you have been to Abhivyakti, the 30-day first-of-its-kind festival in Ahmedabad, and interacted with the artists and curators there, you might have heard mention of Arpita Dhagat. Architect Aniket Bhagwat, who co-ideated the festival, often talks about a young girl who always dreamt of collating and collaborating with artists of the city, of giving them free reign in the city’s public spaces. This girl was Arpita who, as a little-known fact, worked day in and out for over a year to make sure that Abhivyakti happens. When you see her interactive installation Ukhanu and her performance Item, it is no wonder why.

Item compares and contrasts reality with Bollywood constantly, in what can only be described as a series of hard smacks across the face. It does this sometimes so seamlessly that it takes a gentle reminder every couple of minutes to recollect that Item is about Bollywood, and not about real life. But this just goes to emphasise the point of the whole show, doesn’t it? In Item, there is no pop culture reference left untold – from the ‘fetishisation’ of self-love in Kareena Kapoor’s ‘Main apni favourite hu’ dialogue in Jab We Met, to the speed of information-consumption that online listicles have habituated us to.

The 60 minutes of this performance portrays the many roles that a woman plays in her life. Six boxes on stage serve as a kind of playground, metaphorically representative of the ‘boxes’ that we put women in.The six actors sing, dance, act and essentially live their lives in their six ‘boxes’. Between the six of them, they tackle all-too-familiar issues, like trying to be a tomboy to look cooler and discussing in hushed whispers about losing virginity. What struck me is how bold the whole composition is. In this city, I have never heard the words ‘virginity’, ‘vagina’ and ‘vulva’ uttered in public, let alone in a public performance. 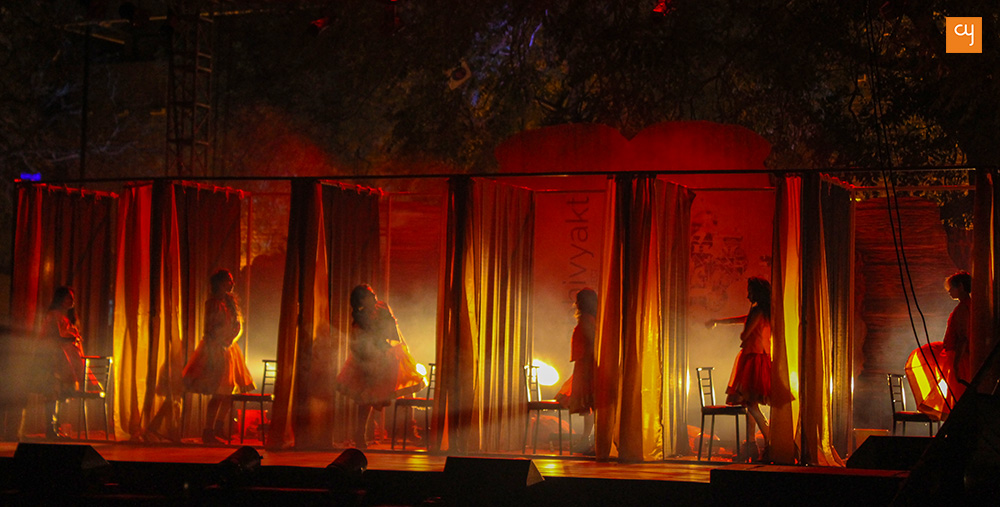 What does being a woman entail? This question has been asked and chewed upon so many times that it almost tastes stale now, but Item does not pretend to answer it. It does, however, show what being a woman does not entail. She is also not all about being a mother who is only ever-sacrificing. She is not just a girl hanging on to the “mera pati mera devta hai” notion, and she is definitely not a working woman being called a ‘slut’.

These are ideas that have been around for some time. While a lot of us, like me, may have broken past these stereotypes and moved on, what is mindboggling is the fact that I never once looked back on the pop culture I grew up with. I never thought back on how these dialogues, which we quoted with fondness, are essentially misogynist. Item collates so many dialogues from so many movies we have admired over the years, making me question everything I have ever known.

Fast-paced and emotionally charged, Item is a bold venture in art, or rather, in education through art. Everything, from the sets to the light and the music, adds an additional beating heart to the pace of the show. Houseful, the show had audiences laughing constantly. Women would launch into intermittent bursts of hearty agreement, while some men sat cringing in their seats, not knowing what had hit them. A lot of the younger audiences felt left out, though, having not seen a lot of the movies referenced in the play. But the show ended with the women shouting out a rap song called ‘YO kulta’, which left everyone aghast at the blatant use of a derogatory word such as this, which seems so normal when uttered on screen, but horrifying when used upfront; especially when uttered by the very same women that they are so often directed at.

While #MeToo, and movements for equal pay, are on the horizon in the world, Item seems to ask us: when will we in India start questioning why bikini babes dance in the background in our cinema, or why female characters primarily serve to be seen as ‘sexy’ in our movies? Item very eloquently asks us if a woman is nothing but a sum of the ‘boxes’ we see her in. And we know the answer to this. So when do we stop consuming a pop culture where the romanticisation and dramatisation of every emotion has led to toxic stereotypes like the ‘Abla Naari’  or‘Kulta’ or ‘Pati Parmeshwar’ ? A woman in Indian cinema is either a lovesick teenager or a narcissistic bitch. There is no in-between, no reality check. When do we start seeing characters which are as real as you and me, like the woman who just crossed the street balancing two children and a briefcase with élan?

What really scares me is this – is cinema really ‘art reflecting life’, or are we living our lives to reflect the cinema that we see?

Item left most of us unsettled, as it intended to. The play is a very welcome reminder of a Rainbow Rowell quote, “She never looked nice. She looked like art, and art wasn’t supposed to look nice; it was supposed to make you feel something.”And in this, Item truly does its job.

‘Item’ by Arpita Dhagat was staged at the ongoing Abhivyakti City Arts Project at Sanskar Kendra in Ahmedabad.