Social context in most one-acts at GST-INT finals 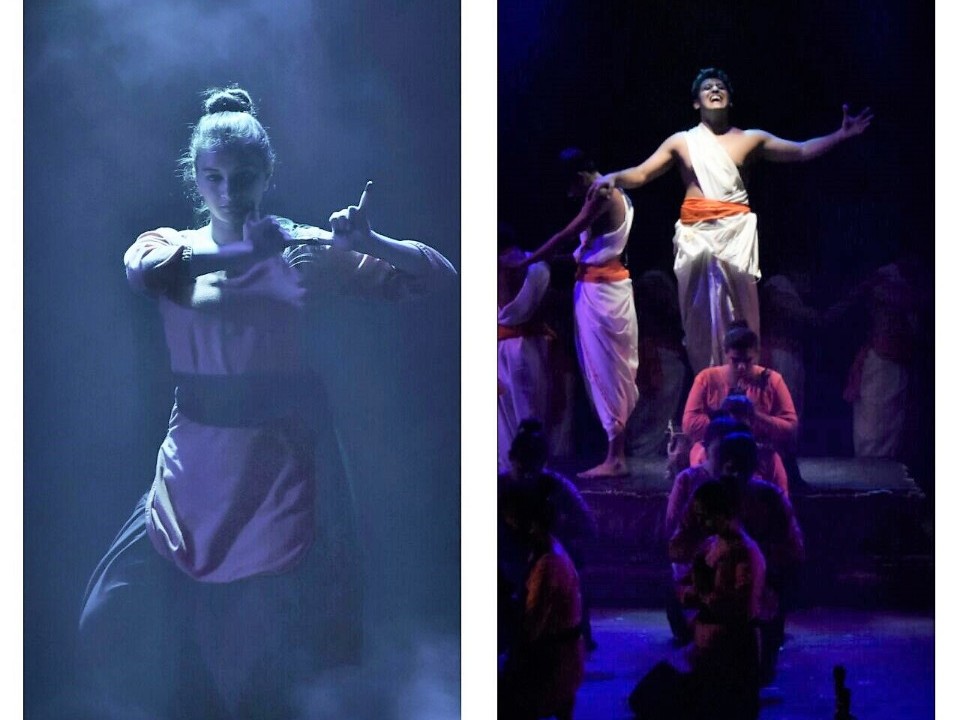 A literary creator with an insight into theatre and a noted playwright, Sitanshu Yashashchandra did not merely light the inaugural lamp at the GST-INT One-act Finals (Thakorbhai, Feb 7). Referring to the origin of Natyaveda, he lit up theatre-lovers’ vision and passion for their pursuit. It was when people were getting addicted to sensory desires and greed, and were quick to turn to baser instincts like envy and anger that Brahma was requested a kreedaneeyakam, a diversion providing both aural and visual pleasures, accessible to all varnas. Sitanshu went on to assert that this diversion, the theatre, could shape the collective consciousness of an age and influence even a ruling dispensation. 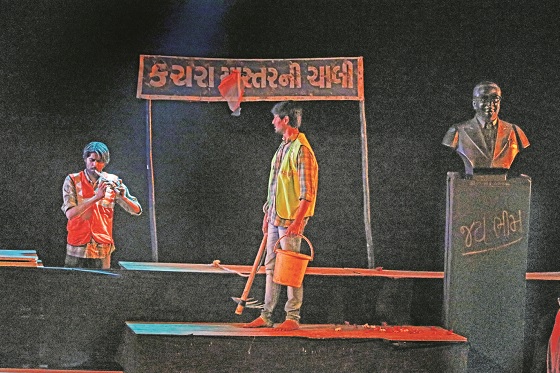 An assertion by way of a performance came on the second day, in H.K.’s Urfe Aalo, a compact play with a manhole cleaner and his son as twin heroes representing their whole community, as much touching as thought-provoking, developed with empathy by Maulikraj Shrimali through observation and conviction. Playing the flute when not in the manhole, the elder hero is resigned to his dream thus realized and also thinking he is associated with safai by his job, not gandaki. The younger one, in keeping with the mood of the time, would rather get himself and his community extricated from the cursed occupational lineage. The irony is the society is not only blind to their pathetic condition, oblivious to the suffering of others, it keeps working for its own gainful selfish ends. ‘Drama for us,’ a character observes, ‘is no mere art, it’s a medium to spread awareness.’ Nearly all in the auditorium applaud the play’s key sentences having a ring of conviction. A few of them can be expected to return home with the awareness such plays target.

On the opening day, SMPIC’s Ashwatthama was a brilliant piece of theatre. It has no immediate social context. Through the complex character of Ashwatthama, in Madhu Rye’s text, it reiterates at the level of human existence searing enigmatic questions the Mahabharata has raised. What is Dharma? What is loyalty? What is duty? What is fair play? And at the end of it all, in Ashwatthama’s specific context, who is the Victor, who the Vanquished? Even with all the means he marshals, Krishna cannot prevent annihilation of the clan he sided with and the accursed Ashwatthama leaves for posterity the legacy of unbridled rage and desire for revenge.

Madhu Rye heightened the level of his verbal medium to Sanskritized classical with rhythm and layers of meaning built in. For an epic sweep of communication through a virile performance with two scores of young amateurs, director Drunad Kamble chooses from the repertoire of the theatre art he knows a mix of imaginative choreographic action and evocative vachik that has with its sounds as well the full-house audience to a man focused on the nuances of meaning it offers. You have here in the eerie dark silence on the battlefield of an epic scale a sense of humiliation, rage and pratishodh on the one hand and individual as also symbolic combats between the divine and the earthly forces. 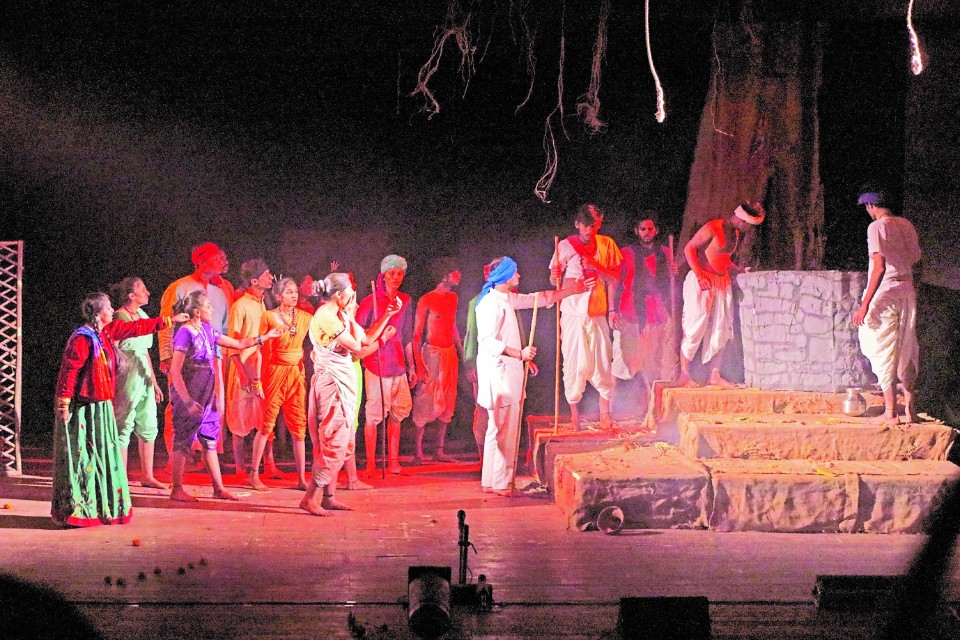 Prashant Jadav, an aspiring and promising theatre person, seems to have been motivated by two factors in working for HLCC’s play Timli. One is the desire to create social awareness about the herd mentality in believing in superstitions. Right at the moment the bride is garlanding the bridegroom, the latter tumbles off the horse he is riding and he dies. The happening is not credibly enough established but it leads to a more credible social reaction in a rural set-up. A coincidence is quickly interpreted, as in kaakataleeya nyaay, as cause and effect and the unfortunate innocent girl is not only blamed for the death but is ostracized from the village as a daakan. It takes her and another brave girl’s courage to turn the tables on the superstitious village-folk. Prashant is also motivated to explore the folk life and dialect of the region on the banks of the Mahisagar.

Though it began on a loud, a bit clumsy note, Sati of Gujarat College, an adaptation, gradually took the shape of a good satire on social attitudes entrenched in our society. They get spelt out vehemently, even with frenzy, by vested interests in a total disregard of the suffering of individuals involved. The director’s touch was particularly seen in the thumbnail caricatures and varying group scenes the play offered. Sonal Vaidya-Kulkarni brought from Amroli (South Gujarat) College Hun Gandevi-no Galo with an interesting social interaction with refreshing elements of the sprouting of love in the heart of a daring girl of a landowner’s family for an educated boy from farm labourers’ community and her sacrifice of it in recognition of the boy’s desire to champion the cause of upward mobility in his community.

Chirag Modi, known for unconventional themes, this time directed for GLS First Client, an adaptation. The client is a modern representative in the oldest profession approaching a beginner in the legal profession. The client is totally uninhibited in speech, behaviour and quite so in her dress style. The young lawyer, understandably inhibited in all this, and the bindaas young woman are contrasting character studies. Her irrepressible chatter unmasks the façade of respectability of men, who are not branded negatively as women are.