Sunil Shanbag’s Play is a Timely Celebration of Dissent

Last night, the city of Ahmedabad saw ‘Words Have Been Uttered’, a breath-taking celebration of the human ability to ask questions and raise voices to the truth.

Galileo is ecstatic in the wake of his discovery of the planetary system. Sagredo, a reluctant admirer, warns him that proving the existence of this system will essentially show the world that the Earth isn’t the centre of the Universe, and that God isn’t at its centre either. This scene from Bertolt Brecht’s Life of Galileo initiates Sunil Shanbag’s play, setting its tone as a tribute of sorts to those who, like Galileo, want to understand and fail to bend.

Sunil Shanbag is a veteran when it comes to the theatre of dissent, having directed critically acclaimed plays like Ramu Ramnathan’s Cotton 56, Polyester 84, and Sex, Morality and Censorship, written by Shanta Gokhale and Irawati Karnik. Now a name that every theatregoer reveres, Shanbag learnt everything he could about theatre while working with renowned theatre director Satyadev Dubey over 14 years. He is also the founder of Aparna Theatre and the co-founder of Tamaasha Theatre with Sapan Saran.

Anyone who knows Shanbag’s work knows that he can not expect the expected. While walking into the theatre space at Abhivyakti City Arts Project, a month-long festivity in Ahmedabad, I had no idea what I was getting into. Shanbag did give a brief introduction at the beginning of his production.“We have looked at dissent across time, geography and cultures,” Shanbag said. “It’s so very fascinating to see reverberations of contemporary fears in texts written more than 400 years ago, and the cohesions in struggles across time and countries, in victories and defeats across the world. What we have curated here is something like a look at layered texts; they invite you to think and reflect, rather than provoke.”

Words Have Been Uttered is curated by Shanbag, Sapan Saran and Irawati Karnik, and directed by Shanbag. The production comprises28 pieces, over two hours long, all revolving around the common theme of dissent. Words Have Been Uttered is a bold statement. It asks of us how many people, and how many times, humans have overcome fear to talk about religion, poverty, corruption, and the right to speak, to write and to protest. It asks how these questions have been asked, have been forgotten and are still being asked, even today. Words from Lal Singh Dil’s revolutionary Punjabi poem essentially sum up the play and lend it its title: “Words have been uttered/Long before us/And will be/Long after we’re gone. Chop off every tongue/If you can/But the words still/Have been uttered.”

You can call the play a dramatic reading of words. Afghan girls sing Landays, which are songs about physical love written by Pushtain girls, which are now banned by the Taliban. Bhakti poems exalt forbidden love. Actor Ayesha Raza delightfully narrates the famous 1944 Lahore court case in which Indian writer Ismat Chughtai was charged with obscenity for portraying homosexuality in her story Lihaaf. She tells the story of Chughtai’s journey to Lahore with Sadat Hussain Manto to fight against ‘the crown’ on these grounds of obscenity.This is followed by Shanbag himself interjecting the performance to state a fact about section 377 and the recognition of the word lesbian.

A roller coaster of emotions, words swiftly glide between genres and narratives, never once losing their firmly held grip on the concept of dissent. One moment, one is laughing at the absurdity of Omar Khayyam’s posthumous trial for spreading revolutionary ideas, for which they brought in a ‘corpse’ as Khayyam. And the next moment, one is deeply moved by the heart-wrenching pain by Hemant Hazare’s performance Dear Democracy, a poem that was originally written by Marathi poet Sachin Mali. A quick respite comes in the shape of songs played on acoustic guitar with almost lazy strumming, but Bob Dylan’s Times They Are A-Changin’ and Peete Seeger’s Joe Hill are more than just punctuations to the prose. They are intertwined with the play’s texts to create a statement of their own. And might I add, a statement that leaves a lasting impact.

In what can only be described as a tragedy of commons, Words also touches upon casteism, with a quick scene where Ambedkar argues with Gandhi over the right of Dalits to live with self-respect. It portrays the utter tragedy of human lives with pieces like Dastoor written by Pakistani poet Habib Jalib’s. The profound poem rejecting ideas of capitalism and oppression of mankind left a lot of us gasping. This was quickly followed by Rohith Vemula’s suicide note– a letter that remains one of the most devastating pieces of dissent to exist today – in which he calls his birth a ‘fatal accident’. A soulful jugal-bandi between Kashmiri poet Agha Shahid Ali’s Land and Palestinian poet Tawfiq Zayyad’s Olive Tree reflects upon the idea of forced migration, though both pieces have been written in completely different parts of the world. The playWords Have Been Uttered is devastating, to say the least. 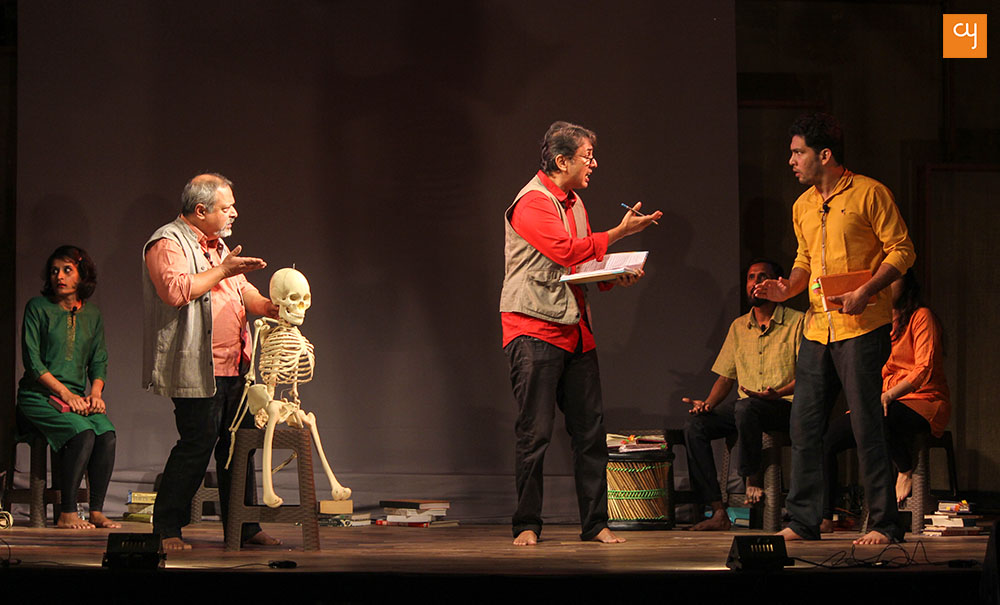 Do we call it a tragedy or mass bigotry that, after all this time, things don’t appear to have changed much at all? The questions asked by Galileo centuries ago are still the questions that I ask today. It is still a norm for punishments to be enforced and for artists to have to apologise for questions asked through art. From journalists like Gauri Lankesh, Govind Pansare, Narendra Dabholkar and M.M. Kalburgi getting killed in broad daylight, to writers like Murugan declaring his own death and MF Hussain’s exile; examples abound of people being persecuted for refusing to walk with the crowd. With India in a turbulent position politically, Words have been Uttered comes at time when it gives viewers a place of solace and a backbone to build their own dissent on.

But as the song Joe Hill says, it takes more than guns to kill a man, these words have been uttered and questions have been asked. The people may have died and long gone, but the words they wrote float across the skies under which we live. And they always will.