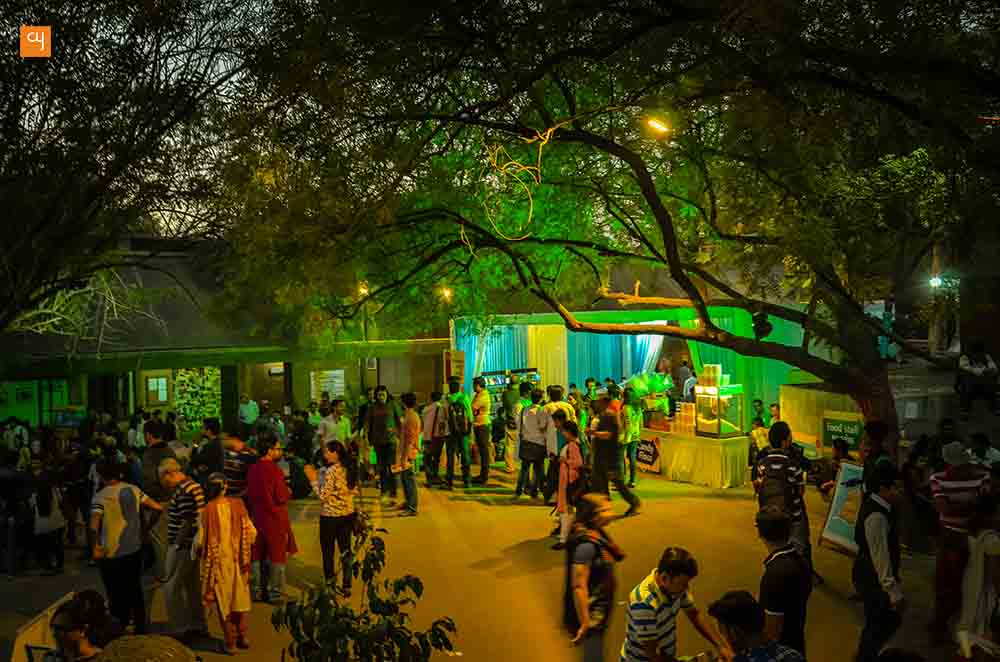 GLF 2016: Many Hues of Literary Conversations to Remind Us of Our Shared Humanity

Unheard stories – poetry from prisoners’ notes, memories from Kasturba’s fictional diary, oral narrations by survivors of terrorism – and glimpses into how writerly instincts navigate the forces of reality, filled the final day of this year’s literary fest and drew it to a close. 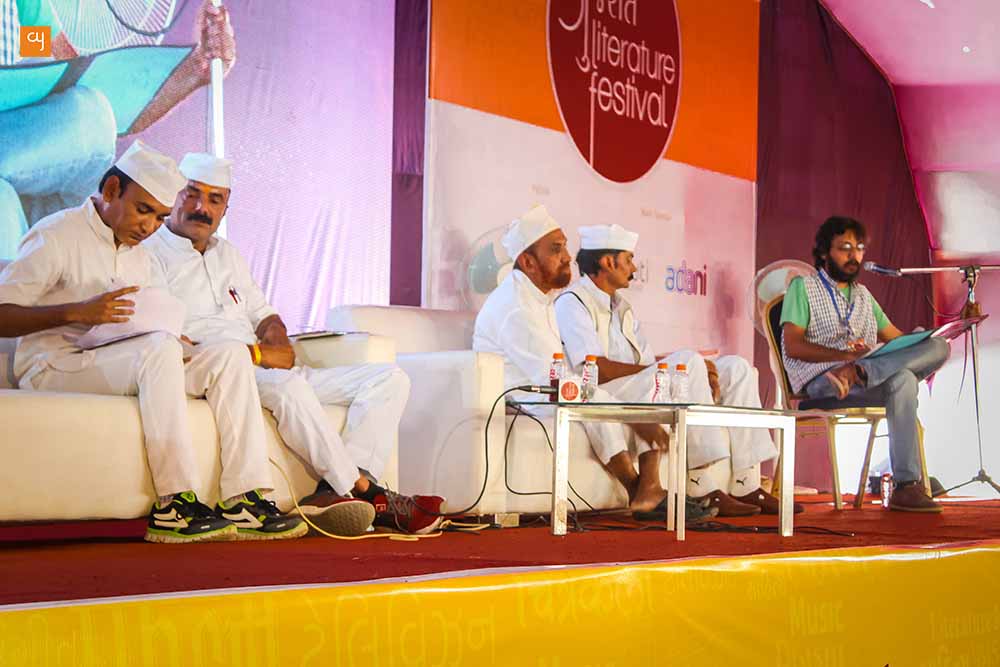 A grim man with a red beard sat nonchalantly on stage, clothed in white, with legs askew. Asked to read out his poetry, he planted his feet firmly on the ground and leaned forward, seeming to speak directly to every member in the audience,

Shabbir has been serving sentence at the Sabarmati Central Jail for over 21 years now. He, along with three other fellow inmates, read out their heartfelt poetry to a resounding standing ovation on Sunday morning at CEPT Plaza. Not only was it heart-warming to see inmates lending words to their suffering, but also to see the audience-members being extremely receptive to their experiences and applauding them with every stanza that they read out. The final day of Gujarat Literature Festival couldn’t have started off on a more powerful note. This morning, for me, was an important marker of humanity – bringing together two groups of people living on two opposite sides of a fortified wall, for a precious moment of empathy and sharing, over words. The realisation that a great number of those imprisoned in our prisons are innocent, struck everybody very deeply.

While this session was the most moving moment in the entire festival for me, equally stirring was an evening of oral storytelling on Sunday that brought together survivors of the ill-fated PanAm-73 flight that had been hijacked by terrorists in 1986 in Karachi. Listeners were profoundly moved on hearing the story of Khanjan Dalal, whose mother was shot dead by a terrorist in the flight, back when he was only 12 years old. Knowing that living with resentment would breed more harm, Dalal took the courageous step to write a letter to one of the captured terrorists. What he learnt through these exchanges of letters across prison walls was disturbing, and yet it helped him understand this experience better. The man in the letters expressed that he was “truly, deeply sorry”, and went on to narrate how his math teacher, back when he was an eight year old boy in Palestine, would instigate ideas of murder – to the extent that he would teach subtraction through such words as, “How many Jews are left standing if we shoot four down?” These exchanges have taken Dalal on a journey to know the truth. By acknowledging that terrorists are shaped by certain circumstances, he wants to understand what these are, so that he can learn to gradually forgive the man who may have killed his mother. 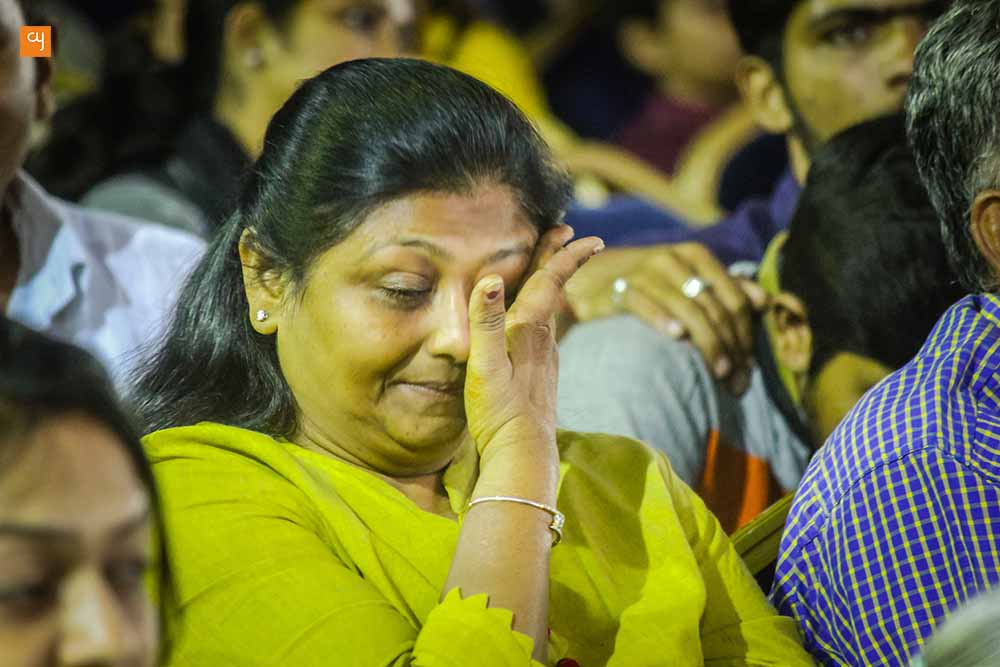 Janki Vasant, another survivor, recalled the compassion of the Pakistani doctors who helped her heal after escape from the flight. Profoundly moved by these kindly encounters, she began to understand the true meaning of “secular” and decided to devote her life to being a ‘giver’, founding the NGO Samvedana to help slum-dwellers. “What happened that night was the epitome of humanity,” she said. “There need not be any religion in the world, except one – humanity.” A moving testimony to the power of compassion over hatred, of forgiveness over revenge, people like Vasant and Dalal represent the highest ideals of humankind – of the indomitable spiritual ability to convert deeply negative experiences into positive sources of strength.

A session such as this also served to reaffirm the power of oral literature – of our traditional way of telling stories – which even writers like Gabriel Garcia Marquez, as journalist Jumana Shah shared, have acknowledged as their influence, for Marquez attributed the tone of his novel 100 Years of Solitude to his grandmother’s storytelling. The organisers of GLF have also been conscious this year of fuelling larger debate in this direction by raising the question of the role of songs and songwriting in literature. Lyricists from the film industry and acclaimed Gujarati poets debated this all day long on Sunday.

Furthermore, another unheard story that surfaced this day was of Kasturba – the woman who “walked with Gandhi”, but of whom little is ever written. Author Neelima Dalmia Adhar has fictionalised a secret diary of Kasturba by imagining, based on evidence, how she might have responded to her life’s journey, of living under the shadow of a man whose will seemed to “always prevail.” It provides a personalised insight into Kasturba’s spirit and relationships with her children and husband. The book adds another valuable piece to the many discussions this Festival that explored little-known nuances from Gandhi’s life. All these debates appear to serve a larger purpose – to humanise the man and gently take him off the “Godly” pedestal that we so often place him on – helping to reveal, in some way, “our shared humanity”, as writer Namita Gokhale would say.

A commendable achievement of this year’s Festival was also to bring together a sheer range of mediums through which ‘literature’ expresses itself, right from humour to screenwriting, from journalism to songwriting. Some may surely be skeptical of such a broad-sweeping open-endedness to the definition of ‘literature’ – this apprehension undoubtedly stemming from the ample examples of poor writing that are evident in many of these streams of expression. Almost every day an angry audience member would pose one question or the other to the effect of – why is humour today crass, or why are songs today so superficial? To which, inevitably, the artists on stage, in some way or the other, would be seen turning the tables right back at the audience – suggesting that it’s the audience’s responses and tastes that are responsible for the depletion in the quality of writing, at large. Every time I witnessed such a response, I would note the emotional intensity with which the answer would stream forth from the artist’s mouth. Does this touch upon a nerve? Does this remind us to ask that important question – of where one draws the line between standing for ideals versus compromising for practicality; of whether one must bear the responsibility of being ‘guiding lights’ to audience’s tastes, or accept that sometimes one has to sink a notch lower to reach out to them? I am reminded of Sebastian in the recently released film La La Land, who is forced to choose between his old-school love of jazz versus the alluring economic prospects of catering to popular taste – this ideological tussle forming the basis of his journey.

Already, a growing decline in reading habits has been fuelling people to think of new ways to shape their literary works. A compilation of Late Harbans Bhalla’s pieces has been converted, for example, into audio version – “because people like to listen, even if they don’t read”, as his son put it. A new genre of ‘book trailers’ is entering the scene to entice people towards books. And the subject of dwindling attention spans is often being cited as the reason why mediums need to evolve to fulfill first criteria for entertainment, over and above communication. In light of such questions, a festival like this is crucial to help us re-evaluate, reflect and make the subject of literature approachable to a wider audience.

To help bridge this divide further and encourage deeper engagement, a series of participatory workshops – that were met with laudable audience interest – formed a crucial element of the Festival. Author Vibha Vyas’ memoir-writing workshop on Thursday prompted people to first appreciate the stories residing within themselves. Helping to address the ‘lack of lustre’, as Namita Gokhale put it, that literary works take on when made for compulsory reading at schools, was a workshop by SD Desai that encouraged people to enact Shakespeare’s historic characters and make them come alive. To enhance further the physical experience of storytelling, a visual exploration of how the same stories differ when experienced through 360-degree vision, versus a fixed frame, was facilitated in workshops organised by creativeyatra.com 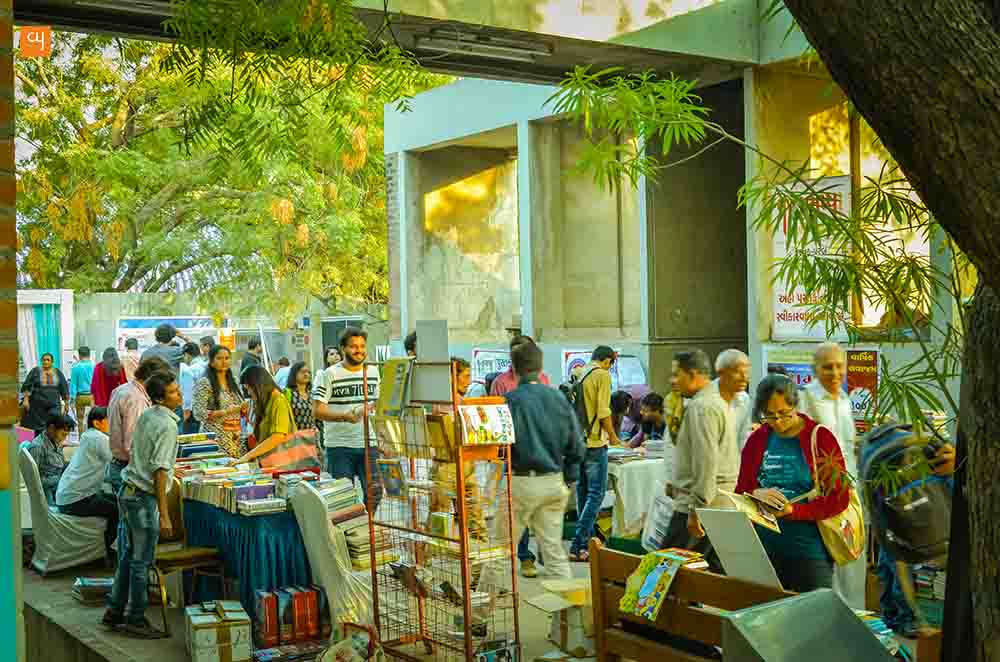 Constantly shifting between sublimity and reality, and clutching onto strands of thought that quickly whisked by in conversations, I was reminded this Festival about the essential purpose of storytelling as it has existed over the years – that it pushes us to recognise the common humanity that binds us together. Stories remind us of our relationships and the impressions that they leave on us – of the opportunities they offer us to turn negative experiences into positive ones – with literature perhaps helping to awaken us to this world of feeling and compassion. As Mia sings in La La Land, “Who knows where it will lead us? And that’s why they need us. So bring on the rebels, the ripples from pebbles, the painters and poets and plays.”