Natyashastra in Gujarati : an invaluable source of reference 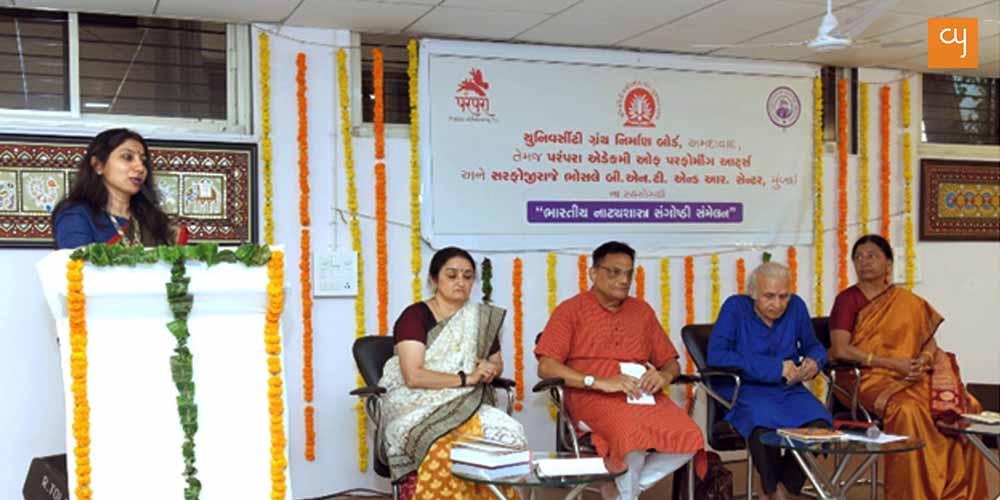 In the sphere of art, everyone swears by Bharata’s Natyashastra. Few have however read Natyashastra shlokas from the source, spread over thirty-six detailed chapters with six thousand of them. The major deterrent is the language, Sanskrit, though simple. At the outset of the festive season, it came to light that Dr Sandhya Purecha has gifted the treatise to dancers, actors, other artists and art lovers in diligently rendered Gujarati translation published by University Granth Nirman Board as BharataMuni Virachitam Natyashastram (earlier launched) in an elegant form.

Natyashastra is considered the fifth Veda. In response to an entreaty from Lord Indra and other gods for a kreedanaka, a ‘plaything’ pleasing visually and aurally for one and all, Lord Brahma – so goes the legend – created it. With Paathya (recitation) from the Rigveda, Geet (song) from the Samaveda, Abhinaya (representation) from the Yajurveda and Rasa (sentiments) from the Atharvaveda, imitating the affairs of gods, kings, demons, rishis and ordinary people, did He create it, such that न तत् ज्ञानं न तत् शिल्पं न सा विद्या न स कला| न असौ योगः न तत् कर्म नाट्ये अस्मिन् यत् न दृश्यते || There is no knowledge, no visual art, no learning, nor any other art or yoga, no human action that is not reflected in the dramatic art. Drama (नाट्य), it needs to be clarified, includes dance as we know it today.

A senior disciple of Acharya Parvatikumar, Dr Purecha studied Natyashastra while working for Government of India’s Junior Fellowship earlier and then for her Ph.D. under his guidance with particular reference to the Angika abhinaya enunciated in it.  This researcher-dancer-choreographer has also demonstrated with intricate details all the 324 shlokas of Nandikeshwara’s Abhinayadarpanam through her solo Bharatanatyam performances with the acharya guiding her for IGNCA, New Delhi. She is the founder-director of Bharata College of Fine Arts and Culture of Sarfojiraje Bhosale Centre, Mumbai.  Ahmedabad gets to see her well-trained disciples in pleasing dance presentations from time to time. In the guru-shishya parampara, she has also been grooming Bijal Haria of Parampara Academy in her academic and performance pursuits.

Credit for a reader-friendly publication of Natyashastra in Gujarati (2018) goes to the Granth Nirman Board (Gujarat). With a significant Shiva-Parvati image in cosmic dance on the cover, the 674-page volume of the first of its four parts has been neatly printed. The author’s contribution in making it friendly to even a young reader is in diligently giving the padachchheda (separating words joined together in samaasa and sandhi) of each shloka, the anvaya (sequencing the words according to Gujarati grammar) and then the arth (meaning).

There have been numerous errors of spelling in Gujarati in the book which hopefully would be removed in its second edition. They will not, however, misguide young dance learners for the basic guidance they seek referring to it. For reference from time to time, the book on the shelf at all dance centres could be of immense value both to the teacher and the students.