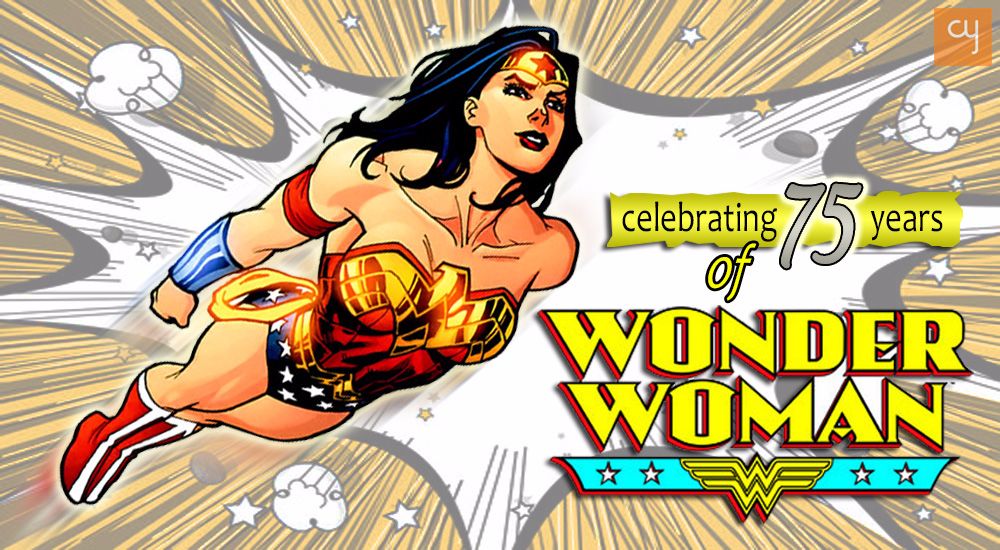 We all know the classic story of two cats fighting and the monkey stealing the bread. That is exactly what I feel about Batman Vs Superman : Dawn of Justice. The movie was a debacle to begin with and the only bright spot, was Gal Godot’s Wonder Woman who silenced the chaos by just, showing up. Not that there was a lot of her, but it was the first time we saw Wonder Woman on the silver screen and we sure wanted more of her.

And we got her! The new Wonder Woman trailer is out and to say the least, it has all us, geeks and non-geeks excited. As the legendary character turns 75, here is a bit of a background on her.

It is known that Wonder Woman first appeared as a back upcharacter in All Star Comics #8, in 1941. But she was created by Stan Lee and DC publisher Max Gaines in hopes to create a new superhero, one who represented hope and peace. It was the psychologist and friend, Dr William Moulton Marston, who stencilled the character, based on his wife, the only person he thought represented hope and peace. Both Marston and his wife were active in the women’s liberation movement and Wonder Woman was their symbol of socio political beliefs about gender equality.

Wonder Womanwas sculpted from a clay figure by her mother Queen Hippolyta, and was brought to life by Zeus. More commonly known as Diana Prince, She gained her powers in the form of blessings from members of the Olympian deities. Over the years she came to be known as the Daughter of Zeus.

True to her Amazonian heritage, she had skills like hunting and fighting, strategy development and an arsenal knowledge of cutting edge technology of the DC universe. Her outfit also goes to show her battle skills, including the Lasso of Truth, a pair of everlasting bracelets and a tiara which serves as a missile.

Little did they know she was to survive for 75 years, will be known the best combat fighter in the entire DC Universe and have a major cinematic debut. The first look of Wonder Woman is here and it slays, getting geeks and non-geeks all excited over the spectacle. The Wonder Woman trailer starts with humour and ends with a laugh, telling us that DC is learning to laugh as well, unlike the very preoccupied Batman vs Superman. DC believes is mythology and Magic, and that is what separates it from Marvel – and while the whole movie may not be based in Themyscira, it is going to render a lot of creative imaginations soaring! But it is the Combat scenes that have us arrested – After all we know what Wonder Woman is capable of. She has silenced a hoard of classic villains in the DC Universe like the Doctor Psycho, Giganta, Steve Trevor, Deimos, Hades, Cheetah, Circe and the phenomenal White Magician.

Hopefully we’ll have a few more trailers soaring before she says Hello! to us with the Amazonian Warrior tune in the background, come 2017.