Rest in Revolution Devi, for Draupadi will continue to survive and fight! 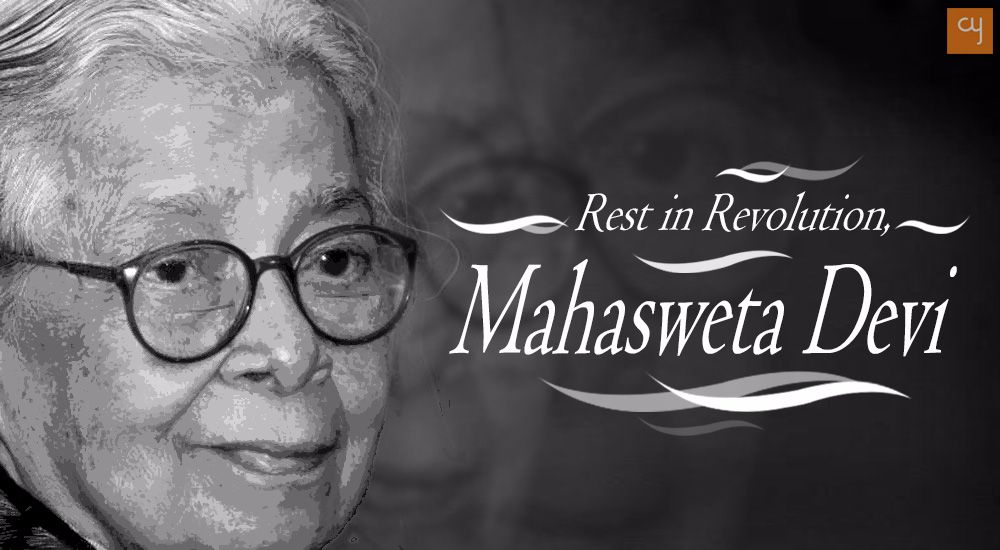 “A billion moons pass. A billion lunar years. Opening her eyes after a million light years, Draupadi, strangely enough, sees sky and moon. Slowly the bloodied nailheads shift from her brain. Trying to move, she feels her arms and legs still tied to four posts. Something sticky under her ass and waist. Her own blood. Only the gag has been removed. Incredible thirst. In case she says ‘water’ she catches her lower lip in her teeth. She senses that her vagina is bleeding. How many came to make her?”

– From Draupadi by Mahasweta Devi, translated by Gayatri Chakravorty Spivak

Straightforward and harshly truthful, Mahasweta Devi’s Draupadi exclaims the tale of Dopdi Mejhen, a village woman ‘encountered’ by state Defence Force. The description is in blunt words: Dopdi’s rape, atrocities and torture is depicted in bare, exposed details. As someone who has extensively read Virginia Woolf and Simone de Beauvoir’s The Second Sex, I must admit that feminism to me was largely western, privileged and in many ways for at least an upper middle class stature. Yes, there was Toni Morrison too, a Nobel Prize winning black writer, but she too was at Princeton. In this largely scattered space of Feminism there was a lone ranger called Mahasweta Devi in India. And to me I must admit, she came as a reckoning that made me reevaluate my privileged ideas of Feminism and how they would absolutely fail in the criticality or should I say casualty called India.

Coming back to Draupadi, it is’nt a woman’s browbeaten tale where she is destroyed by the violence; it is actually the appreciation of her determined courage. Shaken but not broken, Dopdi who is a symbol of battle to sex, creed and caste oppression. Feminism was more to me than its jargons, Mahasweta Devi had bit by bit broken everything that I seemed to know and stand for, above all what it would mean to understand rather than learn feminism. Draupadi stood for a whole lot of women who have never surfaced, whose plights have lost their voice in the darkness of suppression, in the shackles of shame and brushed under the mat by the patrons of civility. It arose from the ranks of innumerable women, brutalized by gender violence. It was the embodiment of centuries of struggle and the indomitable spirit of the oppressed.

A fiction author, Devi was both revered and recognized – she created a separate space for her work as she increasingly became the voice of the ‘outcasts and the oppressed, the insignificant and cheated. Devi has been honoured with the Sahitya Akademi and Jnanpith awards for her excellence in writing, while the Ramon Magsaysay award and the Padma Vibhushan identifies the social and political importance of her literary, both as an author and campaigner. Her protagonists then were villagers, and travelling labourers, homeless workers (men and women). These were real people – whom she interacted during her visit to the rural vicinity, the vulnerable to attack beings living in the small towns she wrote about. She became a voice for their tales – of utter hardships, of unending abuses, of constitution of strength, of struggle and persistence, of survival.

While she rests in Peace, the revolution must continue