So Far So Good : CY recommends the 10 best books of the year (so far) 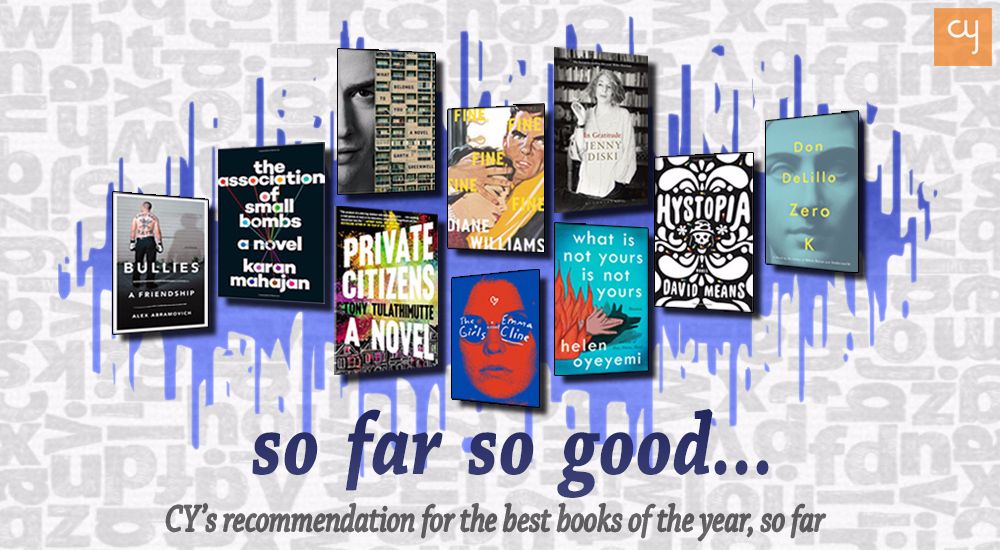 My intuition says that this year will be remembered for the emergence of a new generation and the last words of one great voice. The first half of 2016 has been phenomenal. Such great fiction has rolled out, fresh, in some cases frothy – but good overall. CY tells you what to read and why…

In Gratitude, by Jenny Diski

In 2014 the novelist and essayist Jenny Diski received a diagnosis of lung cancer “with a side attraction of pulmonary fibrosis: two fatal diseases — I don’t do things by halves.” She undertook this memoir, published serially in the London Review of Books about her illness (“another fucking cancer diary”) and her decades-long relationship with the late Nobel laureate Doris Lessing, who took her in when she was a 15-year-old in flight from abusive parents and “the bin.” Diski’s North London truancy in the early 1960s, her initiation into writing through Lessing’s example, and her dry thoughts about her coming end (who would die first, her or Clive James) — these elements make for the final masterpiece of a writer whose prose always delivered the force of her personality. She died on April 28.

The most ambitious novel of 2016 so far, Hystopia might also be the last thing we expected in a first novel by the veteran storyteller David Means: a counterfactual narrative by a Vietnam veteran about his experience in a therapeutic, psychedelics-based trauma recovery program initiated by an unassassinated John F. Kennedy, with a Kinbote–like editorial apparatus attached. The concept is high, but the hardscrabble Means we’ve known for years is still present and in command.

The Association of Small Bombs, by Karan Mahajan

Terrorism has become a perennial subject of the novel, and Mahajan, in his second, has attended to the impacts and aftershocks of a minor bombing in Delhi in 1996. The pitfalls of the terror novel are crudity, fetishization of the terrorist’s mind, and over-attention to the obvious, but Mahajan’s book suffers from none of these. He’s proved that the job can be done with subtlety and an eye for the fine grains of daily life, and not without comedy or irony.

Bullies: A Friendship, by Alex Abramovich

A meditation on violence, friendship, and collective memory, Bullies is less a memoir than a personal portrait of a city. Abramovich’s long sojourn in Oakland with his childhood friend and nemesis, Trevor, now leader of the East Bay Rats Motorcycle Club, prompts a history of the city as a zone of bullying exploding into the present with rough days of Occupy Oakland.

A panoramic black comedy of millennials in San Francisco, Private Citizens updates the Silicon Valley workplace satire, the narcotized loft party set piece, and the chronicle of post-college malaise. Tulathimutte has begun the essential work of identifying the century’s new forms of vanity and pain. That he’s relentlessly funny in doing so marks him as a genuine talent.

The Girls, by Emma Cline

Cline’s first book, about a murderous cult modeled on the Manson Family, is that rare historical novel aware that the continuities of time are stronger than the little changes that make us believe that, say, everything was different before we all carried phones in our pockets. She cuts through the trivia and traumas of the late 1960s and writes a story of seduction and betrayal that transcends the gory legend.

All of Don DeLillo’s novels have been death-haunted, but Zero K concerns itself with a billionaire and his wife who mean to elude death through cryonics. The novel summons themes and imagery from DeLillo’s entire career and brings them to bear on the impossible question of what it might mean to escape time.

I’m tempted to call Diane Williams’s stories “little gems,” but really they have no equivalent among jewels I’m familiar with. I’ve never tried acupuncture, but I wonder if the experience is like reading her prose. It can’t be as much fun.

What Belongs to You, by Garth Greenwell

In a public bathroom in Sofia, the narrator of this first novel, a young American English teacher, encounters a young Bulgarian hustler and enters his crooked thrall until a series of small betrayals break a spell that isn’t exactly not love. A tour de force flashback returns to the torments of growing up gay in Kentucky and a somber last section portrays the various aftermaths of passion. What Belongs to You is an exquisite triptych.

Dizzying, baffling, and beguiling, Helen Oyeyemi is already the author of six books of fiction (and two plays) at the age of 31. The stories in What Is Not Yours Is Not Yours are unruly in the best way, drawing on pre-modern modes of tale-telling (fairy tales, Boccaccio, The Arabian Nights) to show they’ve lost none of their power in the present.