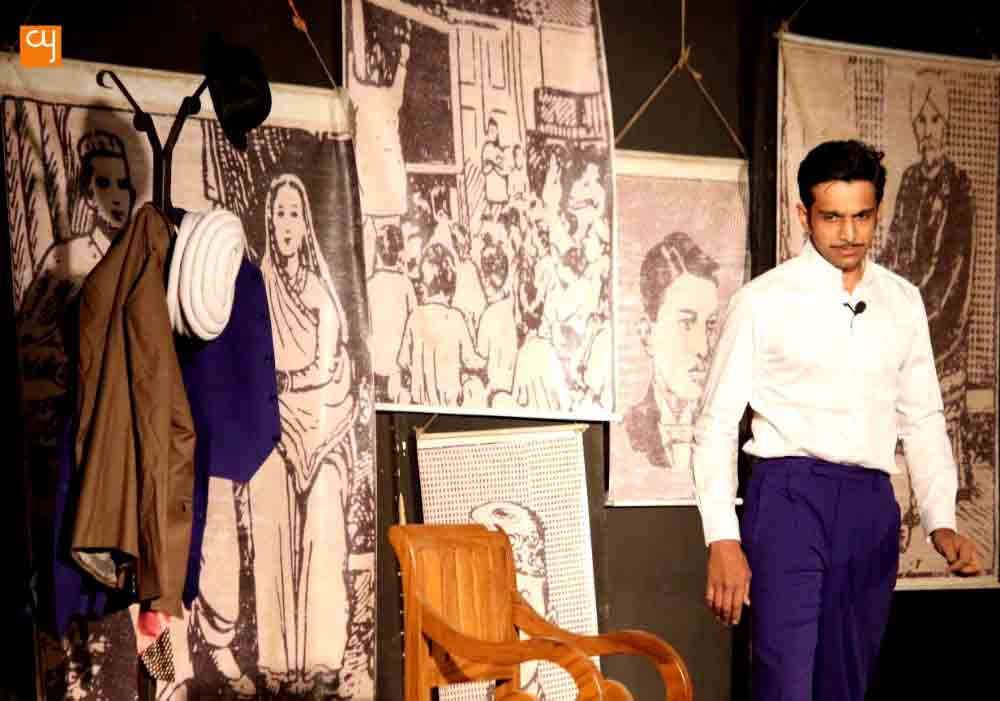 Theatre at times springs surprises. Navjivan Trust probably with caution invited Ideas Unlimited to its new auditorium – yet another of its young manager’s initiatives to make its activities more friendly to the contemporary world  – for a performance of Mohan-no Masalo. Serious thoughts were so agreeably presented by the actor of the close to a two-hour long monologue that the audience laughed and clapped and getting serious held back tears. Even the Gandhians among the audience were heard at the end suggesting more shows of the performance.

There are three cornerstones of the successful performance. One is the craft of dramatic writing that not even once swerves from the intent of giving the audience glimpses of the formative years of Mohandas Gandhi. Ishan Doshi surprisingly is a young man in his early twenties making a debut in this kind of writing. The director is a theatre veteran Manoj Shah. Once again he shows an insight into what it is that connects the actor and his action on the stage to a cross-section of spectators. Keeping them in good humour all through he has serious ideas put across. The third, most visible, is the young actor Pratik Gandhi’s felicity of expression with the use of his body and voice with the feeling within. He is particularly good at the modulation of his voice, which with a gleam in his eyes he uses with a remarkable sense of pauses and timing. 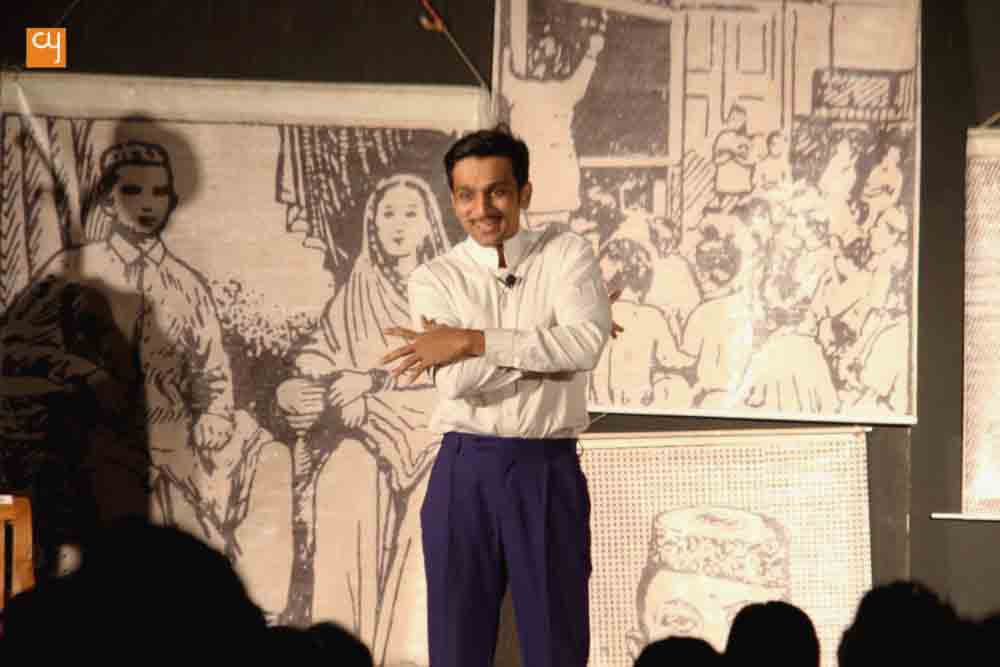 The events Mohan narrates chronologically, as from a diary he supposedly wrote, in his sweet Kathiawadi dialect and occasional English and Hindi, are interspersed with recorded voices of an authoritatively humiliating judge or that Englishman in the train in Pretoria. They are striking in their brevity. Each of them is related to a signature personal trait in the Mahatma, which is immaculately articulated with an absolute economy of words. The flow of narration remains uninterrupted with strains of folk music of the region on the ektaaro generally and of a classical rendering, in the voice of D V Paluskar for example. Atul Dodia’s images of Gandhi and his family as the backdrop help the events come across to the viewer with recognition. Stage props are but sparse – a felt-hat, a white turban, a navy-blue jacket and coat matching with the pants he has put on, hanging on a stand on one side. The unintended contrast with the latter day meditative visage of Mahatma Gandhi even when at a meeting on the walls of the room don’t go unnoticed by a discerning viewer. 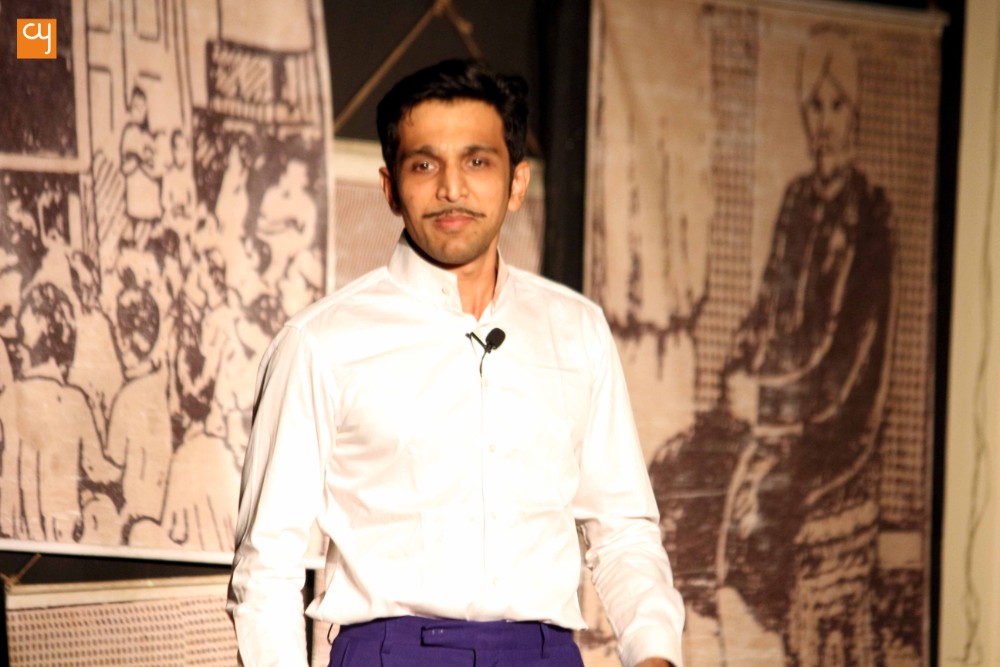 The personal traits were all in the genes or got developed with the young Gandhi’s gradual evolution of the character. A friend persuaded a weakling of a boy, Mohan, to eat meat to be strong enough to fight the British (!). He gave in. He used to steal money and smoke too. When he realized this he gathered courage only to write a letter of confession to his father. The father was pained at these aberrations and in the heart of his heart perhaps appreciated the son’s gesture. In silence, tears fell on the letter and he didn’t utter a word. The silence, Pratik’s Mohan felt, echoed piercing time till today. He learnt the lessons of forgiveness and of ahimsa for the years to come. 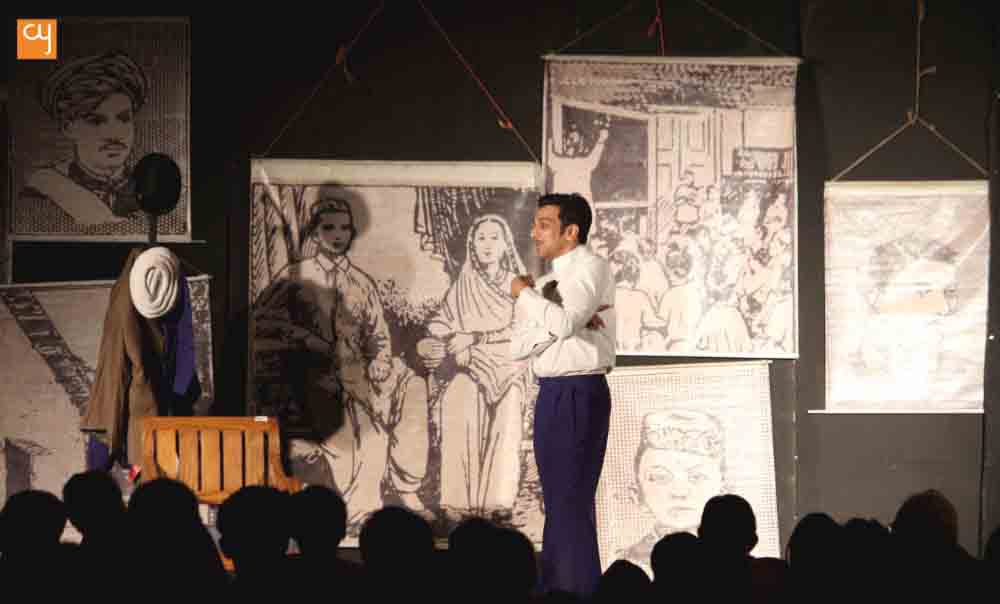 He was sixteen. Perhaps understandable at his age, he remained so attracted and attached to his wife that one night he was at his ailing father’s deathbed dutifully pressing his feet, and at the first opportunity he returned to his bedroom to be with her. Soon enough a knock and a voice at the door said his father was no more. Mohan’s feeling that he could not be a Shravan to his father gets heightened with a vocal strain. He spells out his lesson: Do the right thing at the right moment. … The climactic scene on the railway platform is followed by repeated pounding with fists and kicks even in the waiting room.  He asks, as to himself, ‘Why did I not raise my hand?’ ‘Who am I?’

Common condiments. A flavour uncommon. With the actor’s conviction about it, it reaches the viewers and leaves an impact. His eyes at times glisten wet with his being one with the character and the situation. The viewers reassuringly applaud the performance at the right moment and give it a standing ovation at the end. It has the potential to click in any language, in India or abroad. In contemporary idiom, with occasional contemporary references, it is meant for contemporary communication on Mahatma Gandhi.