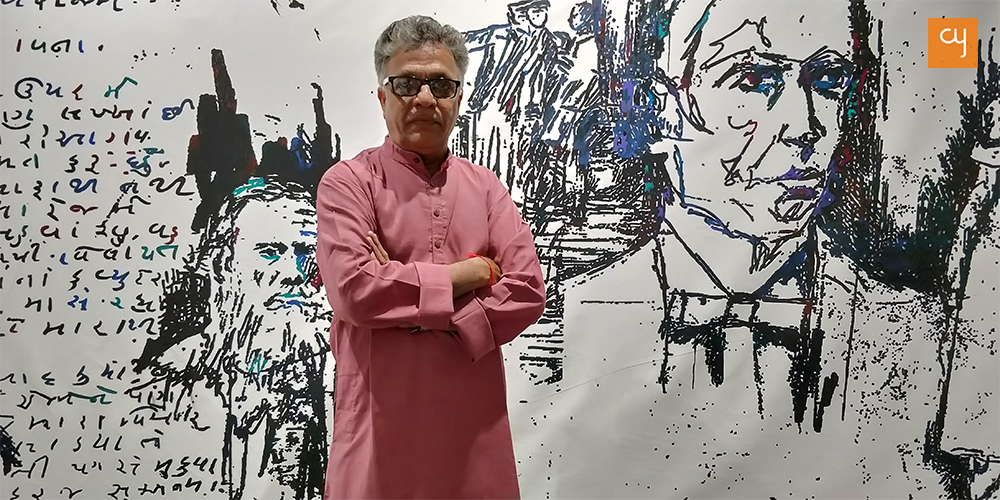 While there is national celebration of The Gandhi at 150 milestone and itineraries of the official programmes are lined up from Delhi to Ahmedabad, it’s heartening to see that the local artists community has put together at least two art shows to commemorate the occasion. The two shows started in the town on Oct 01, the eve of the Mahatma’s birthday.

The first one at Sheth C N College of Fine Arts started in the forenoon on Tuesday. The other came in the evening at the Amdavad ni Gufa which was abuzz with excitement as everybody who is somebody in the realm of fine arts in the town had turned up at the venue!

Manhar Kapadia, the most genteel of them all, prolific with a dozen-odd solo shows and many group appearances and awards to his credit, one who specializes in consistently portraying Gandhi on the canvas through more than one series of works over the years, was showing by far his best on Gandhi yet! The much-awaited show that followed his earlier Gandhi series at Jehangir in 2016 and at Porbandar in 2016 and 2018 was commenced ceremonially with the lighting of the traditional lamp by veteran artist Amit Ambalal, gallerist and art entrepreneur Anil Relia and advocate Tejas Barot. 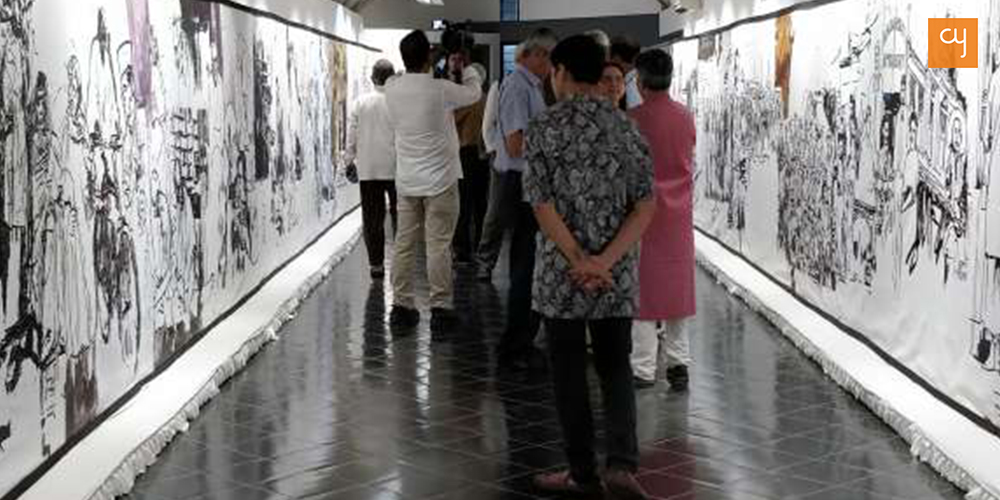 A huge 150-foot canvas, man-high and one that could also pass as a one-piece ‘mural’ strung around the entire Gallery at Gufa campus, this exhibit for the show contains vignettes from the Mahatma’s life and thereby becomes Kapadia’s, nay the city’s tribute to the genius of the political ethicist who rose like a colossus from the banks of the Sabarmati; and led a mass movement in the first half of the twentieth century. 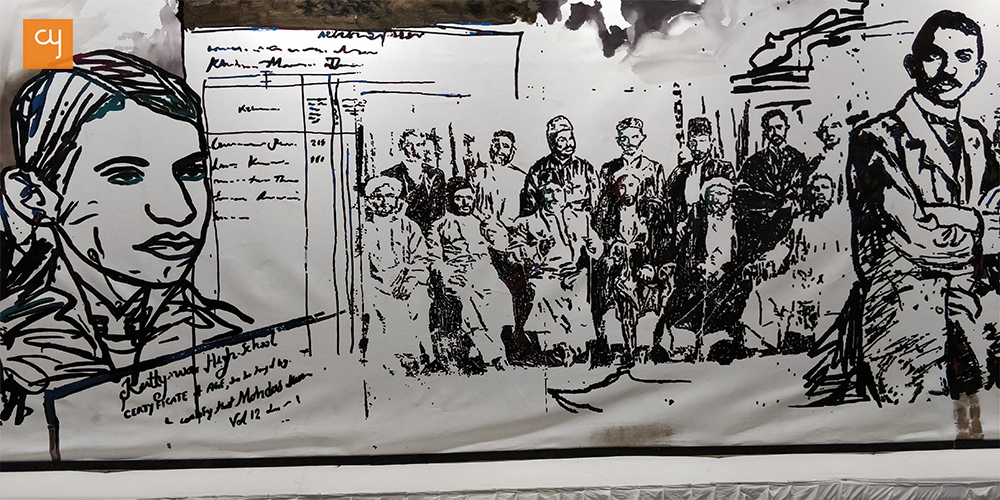 The culmination though of the disobedience movement inspired by Gandhi, aided as it was by other forms of resistance from the wings brought the Indian independence with a byproduct that neither Gandhi nor most others wanted; and yet it happened. Be that as it may, and history will keep dissecting the why and how of it, the men and the circumstances leading to it, Kapadia remains an ardent fan of the Mahatma and has created Gandhi’s life on canvas one more time through a befitting, singular work that took him and his wife three months to complete. 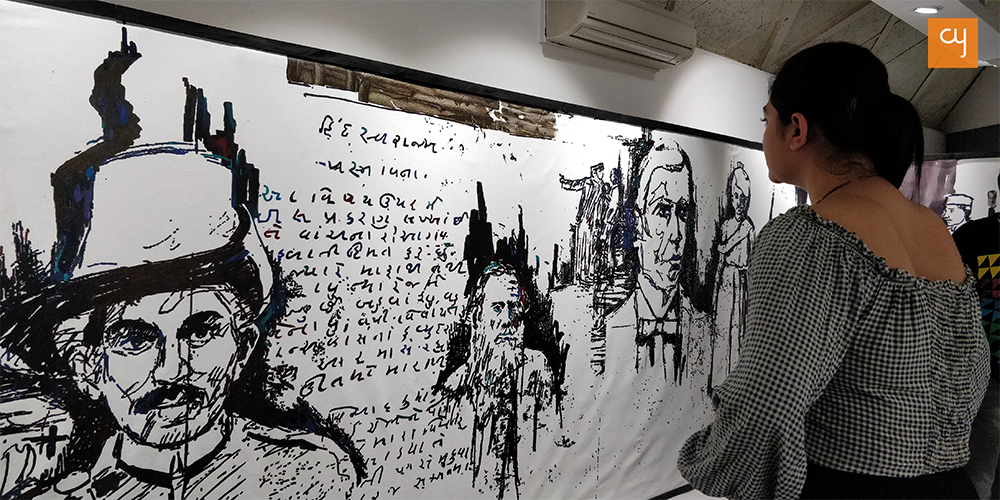 The giant work that has Gandhi all over in various phases of his chequered and impactful life, contemplative moods and in parleys with his contemporaries in the Congress Party, this is a mix of outline drawing, sketching in black and hatching in some other hues of colour on the canvas. The work creates for the viewer an enchanting illusion of walking with Gandhi in a long street, round the corner and into another long street. Walk while the views change and merge into different phases of a spectacular life captured in the episodic work and you figure out the familiar personalities chosen by the artist to be in the long frame with Gandhi. Viewed thus, we don’t miss Bose, Nehru, Patel, Jinnah, Frontier Gandhi, and even Gandhi’s ‘walking sticks’ Manuben & Abhaben! A last vignette in the panel is based on the front-page news of The Dawn, a paper published from Karachi that reported Gandhi’s death with the same empathy as was visible in India. 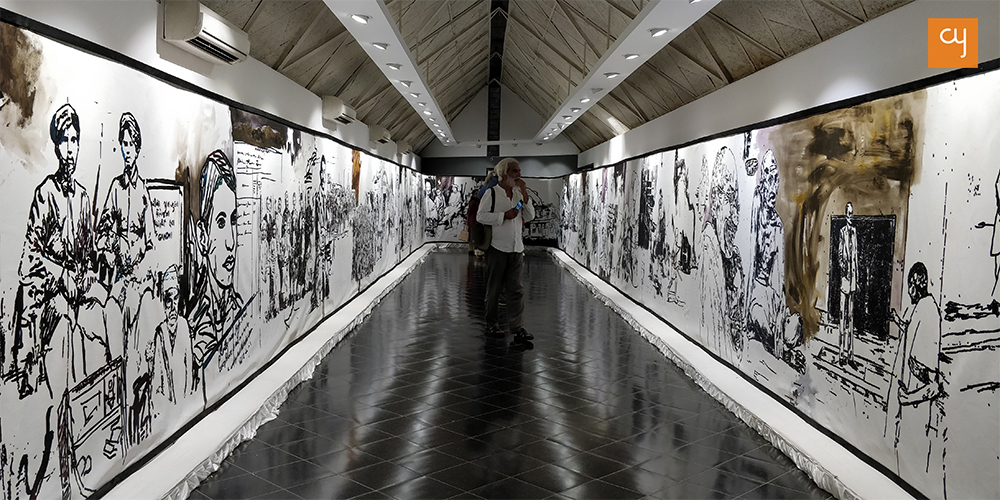 The show also has a panel of a few photographs showing Kapadia and his helpers in the process of painting the huge piece, for which he had to squat on the floor in a school premises; and even on the painted parts of the huge work by spreading a sheet. These work-in-progress photos provide some interesting juxtapositions of Kapadia with silhouettes of Gandhi on canvas.

A must watch, this show at the Gufa is on till Sunday, Oct 06 between 4 and 8 pm daily.