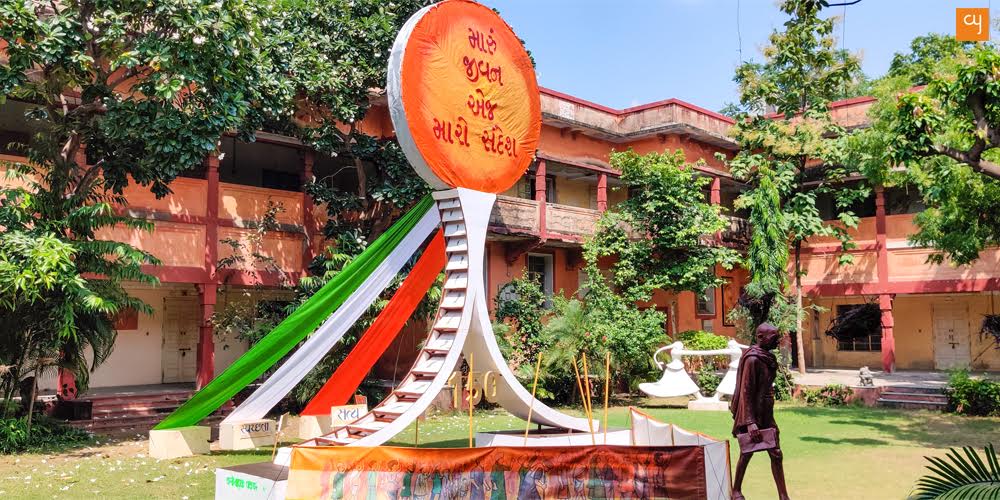 Gandhi at 150 is finally here! A much-awaited and much-talked about occasion! And we are celebrating the Man who was born Mohandas and got transformed into a Mahatma right in the thick of the twentieth century; his contemporaries wondered if there could really be such a man in flesh and blood committed so steadfastly to the ethical ideals of Truth, Non-violence and Satyagrah? 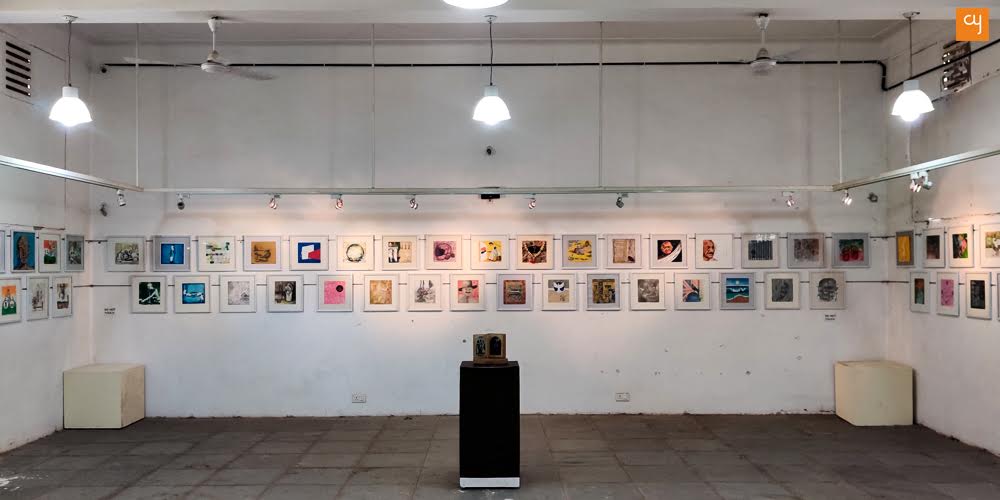 Much had been riding on this milestone ever since the multi-dimensional Swachh Bharat Mission was tagged to it by the present government about five years ago. While the Prime Minister was betting a great deal and in the right earnest to make us all alive to the need of ending open defecation, cleaning the rivers, segregation of waste for recycling, reducing the single-use plastic and also generally keeping our surroundings spick and span to grow up into a ‘neat and clean nation’, we have achieved only perhaps the half; and deferred the opportunity for the other half – at least for a while – by not rising in a critical mass of a collective of the people to the goal that revived the essence of Gandhi on physical environment. 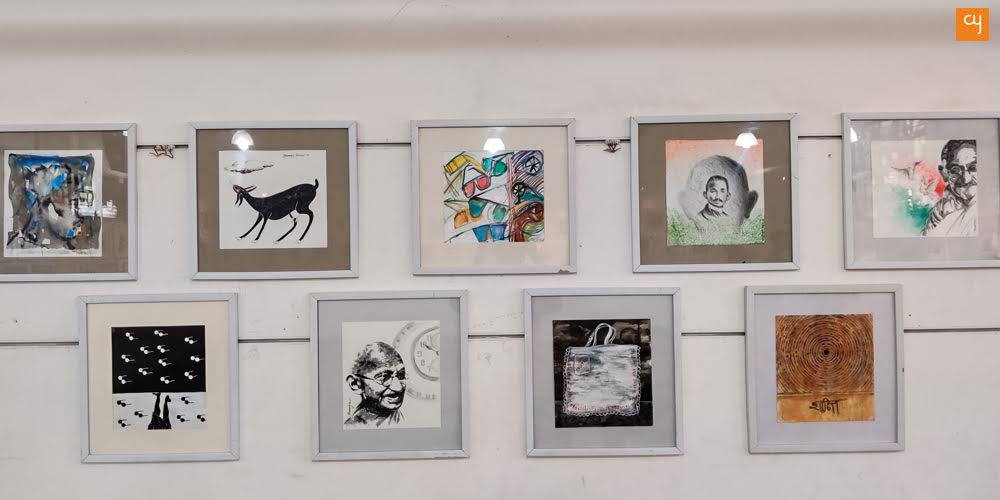 Significantly though, the nation has mostly done away with open defecation as the PM would pronounce that officially from the soil of Ahmedabad as we go online. Yes, there also are pockets which may have acquitted themselves for the officialdom with a ‘fair achievement’ of the river projects, civic and solid waste management targets to celebrate Gandhi and the Mission set after him, for he famously said Sanitation is more important than even Independence. But the situation remains generally grim with people from auto-rickshaws to AMTS drivers to those in sedans or walkers in parks to players in playgrounds to pedestrians on roads not showing a perceptible change of habits not to soil; but just feeling free to spit out their mouthfuls or litter anywhere and anytime. One wonders at the indifference with which we share the national goals proving as if some of us live in another country on another planet. 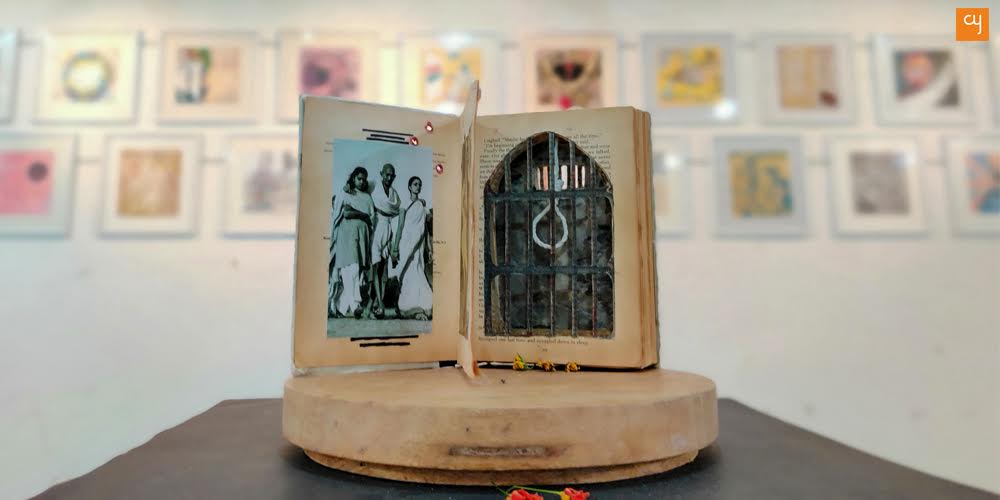 So while we are short on paying a real tribute to Gandhi by showcasing neat neighbourhoods and clean public places, the celebration nonetheless is here in many forms. From discussing yet again the legacy and relevance of his values and even institutions that he built, nurtured and left for the Indian society, the man is concurrently being reevaluated and dissected in every which way by schools of several kinds in the social media. But importantly, the art schools, the artist community together with a bygone Gandhian school in Hindi literature have always portrayed Gandhi in some shining light.

Sheth C N College of Fine Arts in Ahmedabad was the first to respond by mounting an art exhibition in its premises that started on Tuesday at the hands of veteran artist Amit Ambalal and S N Chavda, a Joint-Commissioner of Education. The exhibition of about 150 paintings, 25 photographs and 40-odd posters have been mounted with the help of students and faculty of the College led by Principal Ratilal Kansodariya himself.

Kansodariya, a sculptor himself and his team in the Sculpture Department have put up an installation that could well be the high point of this exhibition, if only for its scale. Comprising of a statue of Gandhi with other elements that portray the national tri-colours, a 150-mark and a huge round plaque hung overhead that reads his quote Maru Jivan, Ej Maru Sandesh (meaning my life is my message), this installation adorns the central courtyard of the college building.

Young students of the College have painstakingly interpreted and reinterpreted Gandhi, his sayings and episodes of his life. From the two major forms of expression in printed posters to paintings, these depictions have recurring themes in some cases, but what the works unfailingly convey is that the students have made a sincere effort in ‘reading’ and comprehending what Gandhi stood for. That’s no mean achievement. There are interesting takes and retakes to create montages on Gandhi’s life based on the metaphor of Three Monkeys, The Dandi March, and the rest and relate them to present day realities like IT revolution, obsession with social media and mobile telephony; or just plain recreation of the events like the train episode in South Africa.

An interesting cartoon caricaturing the three monkeys shows investigative gadgets in their hands while it takes a befitting dig on fake news: Today’s monkeys need to find the truth. One of the very befitting sayings by Gandhi about the artist community finds a due place in one of the posters and it reads: Painters and poets are obliged to exaggerate the proportions of their figures in order to give (a) true perspective. Posters by students Vidhi Gajjar, Devang Patel, Bhavine Parmar, Hiral Dutt, Poornima Deo and many others as also the paintings by several others evoke a sense of appreciation about the young artists’ creativity.

Photographs by faculty member Milind Patel that juxtapose street children with Gandhi’s statue in Sabarmati Ashram or activists with iconic locations in the same premises form interesting studies of contrast or emulation for the occasion.

The exhibition and a visit to the Sabarmati Ashram in this season can together provide a nice day out for the Amdavadi art buffs. The show at CN College is on till 3rd Oct.