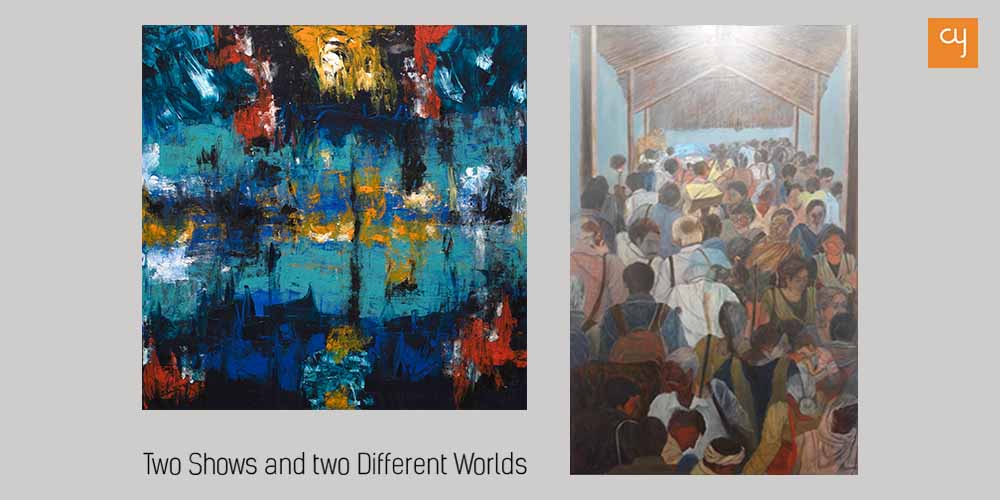 Even as two very successful solo shows by two Amdavadi women artists ended on Sunday and two are continuing at 079 stories and Archer Art gallery through the week and beyond, two more art shows commenced at Hutheesing Centre and the Gufa Gallery on Tuesday. The first Shades and Strokes, a solo of abstract works by Hemang Dave ‘Hemee’; and the second Kala Sangrah a Group show by some MSU alumni. Interestingly, both the shows were inaugurated in quick succession by art entrepreneur and –collector-gallerist Anil Relia. 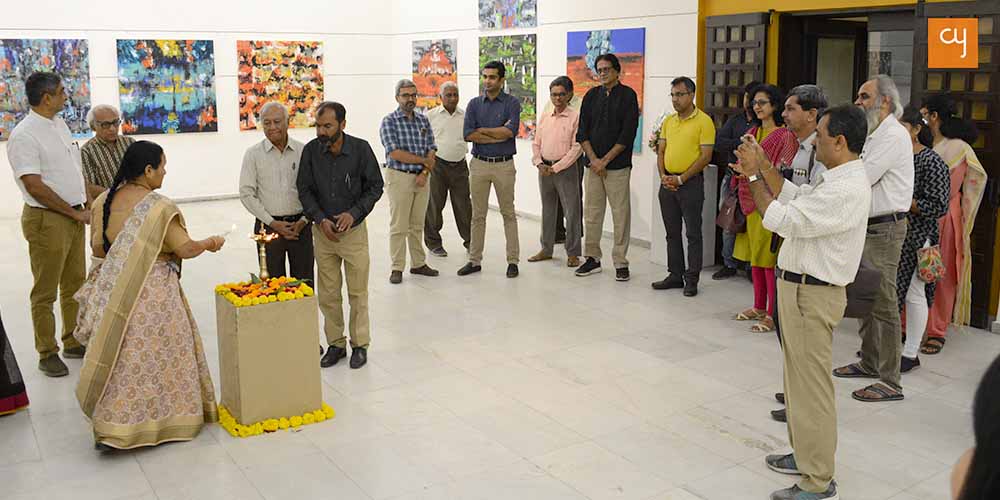 Dave’s show comprises of more than two dozen ‘Untitled’ works in acrylics which are supposed to be landscaped in a variety of colours and patterns. An artist who has a long career of twenty-eight years behind him with several solos and group shows, while pursuing the abstract school Dave walks the talk of the likes of Picasso, who famously said, “There is no abstract art. You must start with something. Afterwards, you must always remove all traces of reality.” 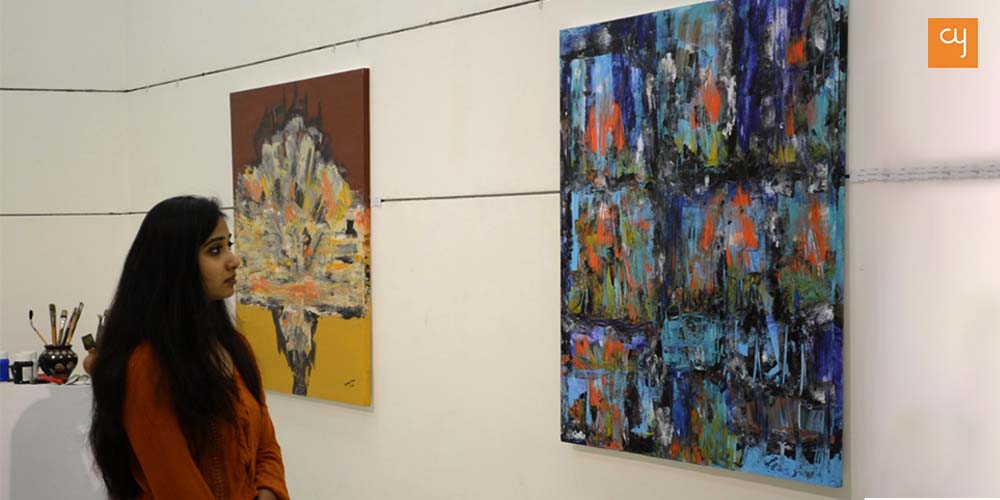 So even as he has treaded the path of abstracts by consciously or unconsciously pursuing the Picasso dictum, his expression does not come easy as it takes considerable time to translate on to the canvas. This would be obvious from the time of about one year taken by him to put his current show together with inputs and guidance by curator friends like Ojas Desai and Giriraj Kadia. Desai has also written an introduction to Dave’s work for the ongoing show. 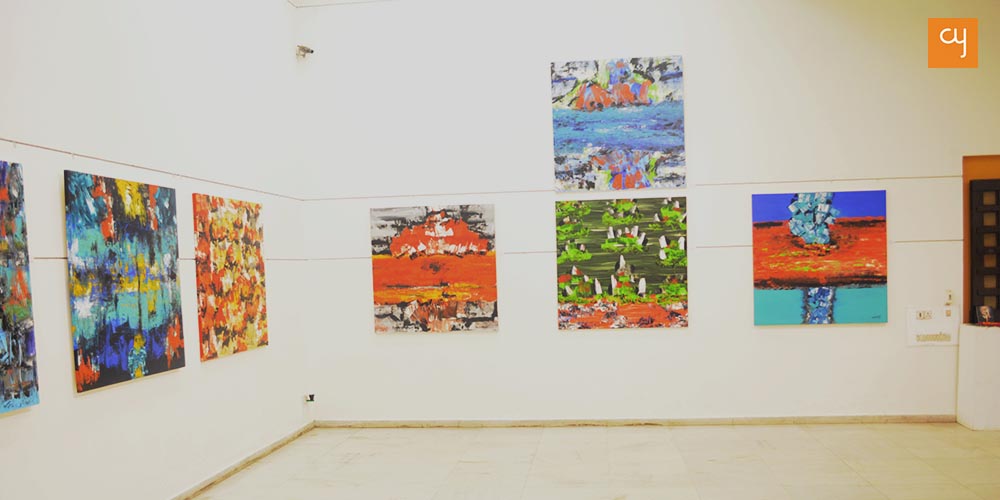 All works on show carry an effusive quality about them, splashed as they are with vibrant colours to portray nature in its glory through landscapes. Further, a couple of Dave’s landscapes in the show also present the ‘view from the top’ as against the front elevation view of the same work, both of which are displayed in the show for the viewers to draw and appreciate the contrasting views. The forms, figures and patterns in some of the works do leave a scope for a detached interpretation here depending upon your own aesthetic sensibilities. Dave’s show will be on till Sunday, December 08.

The other show at Gufa hosted by a collective of young and energetic MSU pass-outs offers a fair deal of etching, digital and Drypoint prints by some of the artists of the group, whereas others have put up acrylic paintings and partly coloured pencil and ink-drawings, etc. Though working with different media, Jayati Kaushik and Dipen Ujeniya pick up similar themes of entertainment and relaxation in daily lives of individuals by “appreciating (and portraying) little things that make life worth living.” In a very interesting coincidence, their works instantly remind us of the same strain of “little stories” seen by us in the works of Shweta Garg’s just-concluded show Of Goddesses and Women last weekend. Ujeniya’s Reader & Morning Walk and Kaushik’s A Stroll in the Park, A Couple and Love Birds resonate in more ways than one with each other, as also with artists’ muse across cities and milieus! 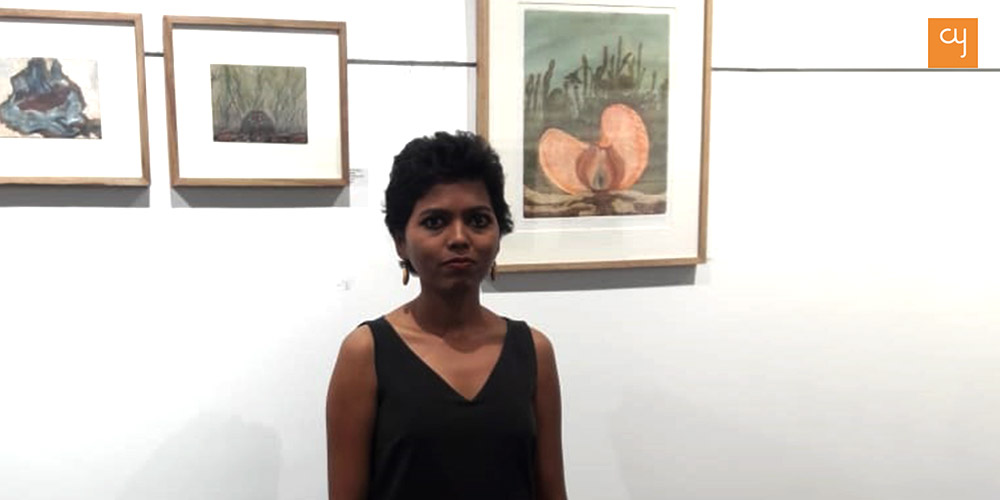 Deva Sharma of Jammu is an epitome of enthusiasm as she discusses her works spurred by the patriarchal society. Having settled down in Vadodara after her master’s degree at least as of now, to work more and more on her specialization in lithography prints, she nonetheless diversifies in other media too. Her works on show are all pencil and ink outline drawings of the female form engaged differently in different works. These works have been created with bird heads and are partly coloured in this part thereby making them interesting hybrid forms. 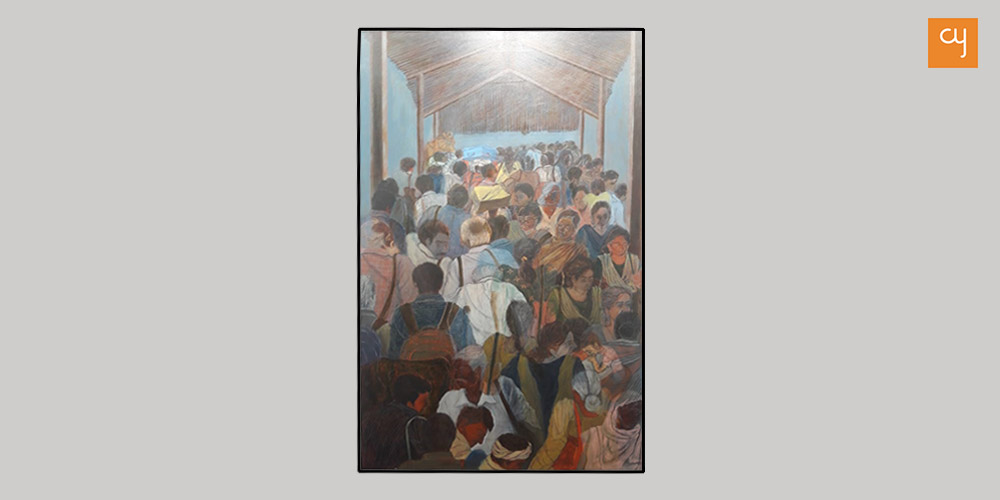 Pranoti Malkute of the same institution is also participating with her mixed media works as also prints; her take being the social and moral challenges facing the contemporary women. For this narrative, she draws an analogy with ‘fresh fruits” which are perishable, more so when cut and left out; and yet have layers and layers to their characteristic traits. Coupled with the feminist works by Deva Sharma, Pranoti’s creations put these issues under spot at a time when people in the streets to parliamentarians are up in arms and venting their heightened anguish and agony due to Nirbhaya-like incidents recurring in Hyderabad and Buxar in quick succession. This is resulting in a raging debate about instant delivery of justice and ways for delivery of the same to inhuman and barbaric perpetrators of insult on women. 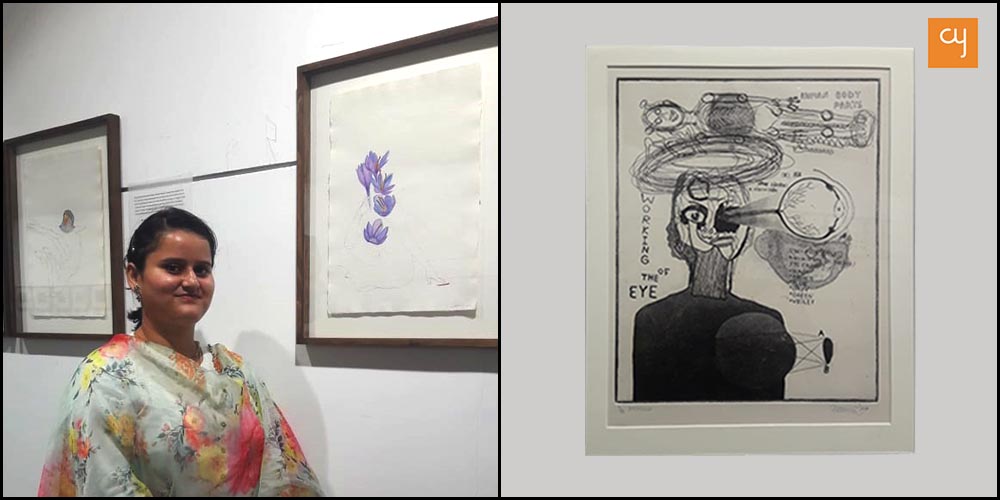 Dushyant Patel, Hiren Patel and Vimal Ambaliya have also featured their unique works at this show which are studies of birds, human psychology and intricate digital takes on a variety of themes. An unusual show, also for its very communicative participants and their skills to describe their art, this one is here for more than the usual time at Gufa Gallery and would thus be available till December 12.