Visitors add to the exchange tradition in Apnu Amdavad 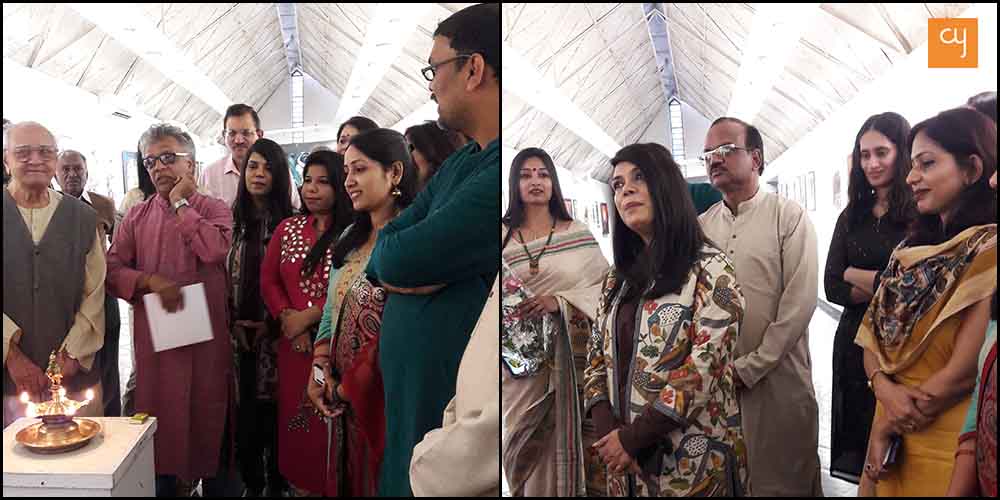 Tatpashchaat a group show of Delhi based artists visiting Ahmedabad was opened on Tuesday at the Gallery in the Amdavad ni Gufa campus. Displaying some 60 works by fifteen artists associated with artists’ group Grains of Canvas of Delhi, the show was opened by the trio of art veterans C D Mistry, Vrindavan Solanki and Natu Mistry while Manhar Kapadia, the well-known artist and art teacher at CNV who coordinated the hosting of the show, introduced the guests to the visiting artists most of whom were present for the ceremony. 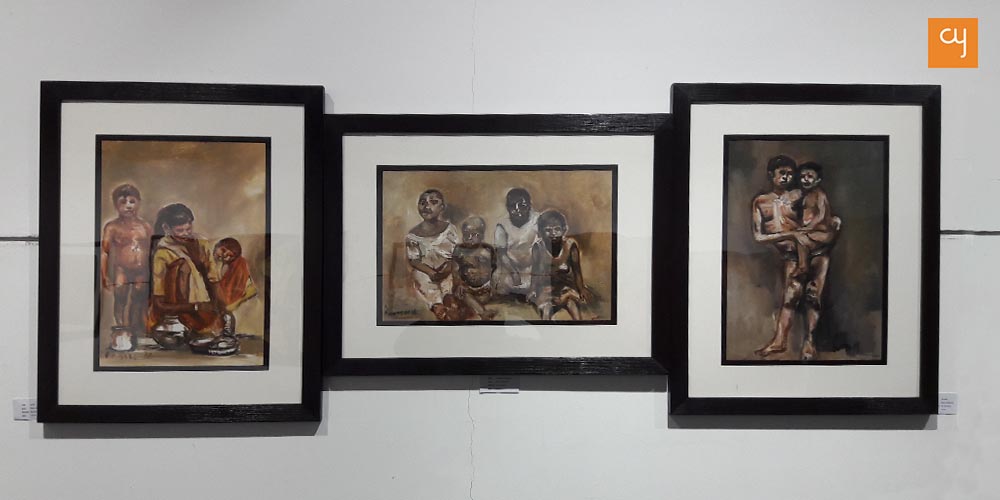 The show features a variety of media from acrylics, oil colours, watercolours, charcoals to wash tempera. It even has a greater variety of themes coming from a set of diverse individuals who include students of engineering to retired chartered accountants to fashion design grads to homemakers all of whom share the common passion of painting through their skills centre at Grains of Canvas, which is managed by their mentor Dilip Sharma. The members of the group some of whom are now showing their work in Ahmedabad at the invitation and with the support of Manhar Kapadia have been working with Sharma for well over ten years now and have made a name for themselves. 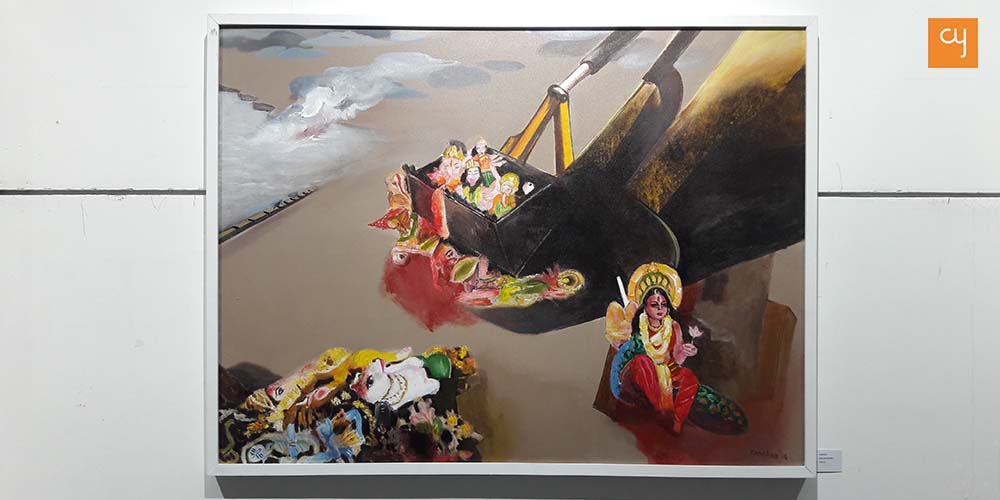 Even as you see the use of oil and acrylic colours in a fair amount of some decent works, as also some use of charcoal in works created by this set of amateurs, none of whom has had any formal training or education in arts, you get a vivid impression that many of these artists have used watercolours to create enough of offbeat compositions; that is compositions which are distinct from the usual streetscapes and landscapes which tend to form the mainstay in this medium. This is also to say while watercolours have been mostly seen by us for their association with the above kind rather than diverse strains of human emotions, life situations, existentialist struggles and more, as is interestingly showcased in many works featured at Tatpashchaat. Tatpashchaat, incidentally, implies ‘what is the next’ for the artist in a general sense of ongoing activity and personal growth, although literally it has a bit of a different shade. 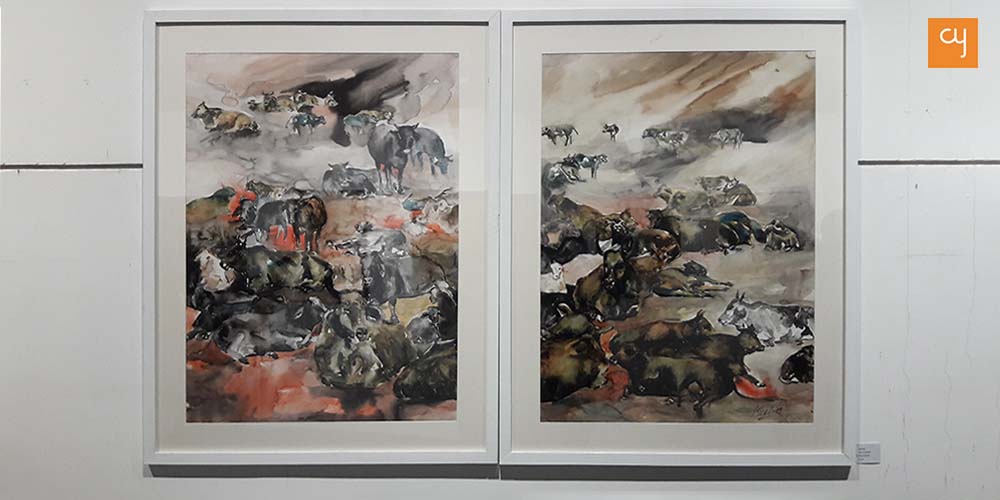 So while on water-colours, we find some excellent works from the repertoire of Seema Bhargava (Alaukik – a take in the realm of mythology), Sarvadaman Johri (Adam; Apostle; Abhishapt; Sankatmochan – the last one refers to the one and only Lord Hanuman); Meetu Kapoor (Khataal and Choolah – the latter being a study of the modest kerosene stove of the bygone era, or maybe it is still running the hearths in some modest homes which may not have benefited from a Scheme like Ujjawala); and Madhuri Thakur (Expectation), all of which come with the visual depth and a mesmerizing effect the medium can create.

Some of the works depict a great amount of detail which is seen across media here, including again the large-sized water-colours! For instance, Khataal, the water-colour by Meetu portrays herds of cattle in an interesting setting; Haat a work in wash tempera by Shashi Gupta captures a number of women vendors mostly selling their earthen pots; Adam, Apostle and Abhishapt all water-colours by Johri capture a number of human forms in groups of individuals and sundry footwear abandoned outside a temple, or even seemingly abandoned in the wake of a stampede. 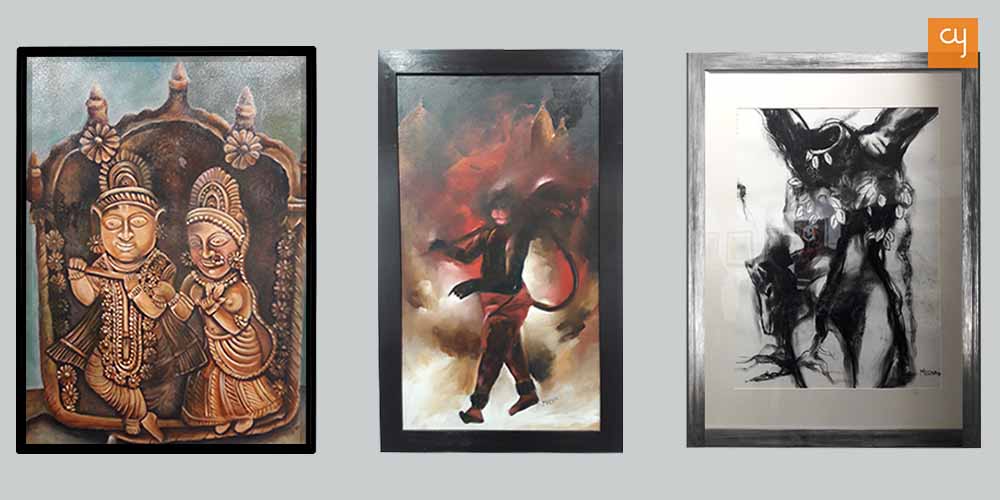 Some of the artists stand out in their bold and majestic portrayal of figurative forms, viz Renu Sangwan for her work Parivar and Shweta Garg for Guru and Life of Struggle. Other artists Drishti Gupta (who has also curated the show), Kanchan Mehra, Ila Bharti, Manju Thakur, Mona Chadha, Shruti Goyal, and Megha Vij also impress with their works, some of which are half abstracts. Creditably though, the use of colours by this dedicated set of artists looks very balanced to the scheme of their subjects and produces an appeal for the overall impact of the group show while these self-grown artists mentored minimally by Sharma come across as very humble individuals.

The only shortcoming that you find is in the scattered display inasmuch as three to five works of an individual artist on the show haven’t been grouped and placed together; which comes in the way of instantly creating a complete feel of the work and style of the individual artist. This can and should in all probability be corrected while the show enters its second day on Wednesday and goes on.

The show interestingly comes close on the heels of two recent shows by alumni-artists from MSU, Vadodara and another trio of women artists who came from Pune and other cities of Maharashtra; as also after the all-India competitive First Take’s fourth edition by Abir and adds to the evolving tradition of exchange of art.

A good show full of variety this is on for visits till January 12.