Sepia Scenes of Rural Gujarat: Vrindavan Solanki on Art as Witness to Time and Silence 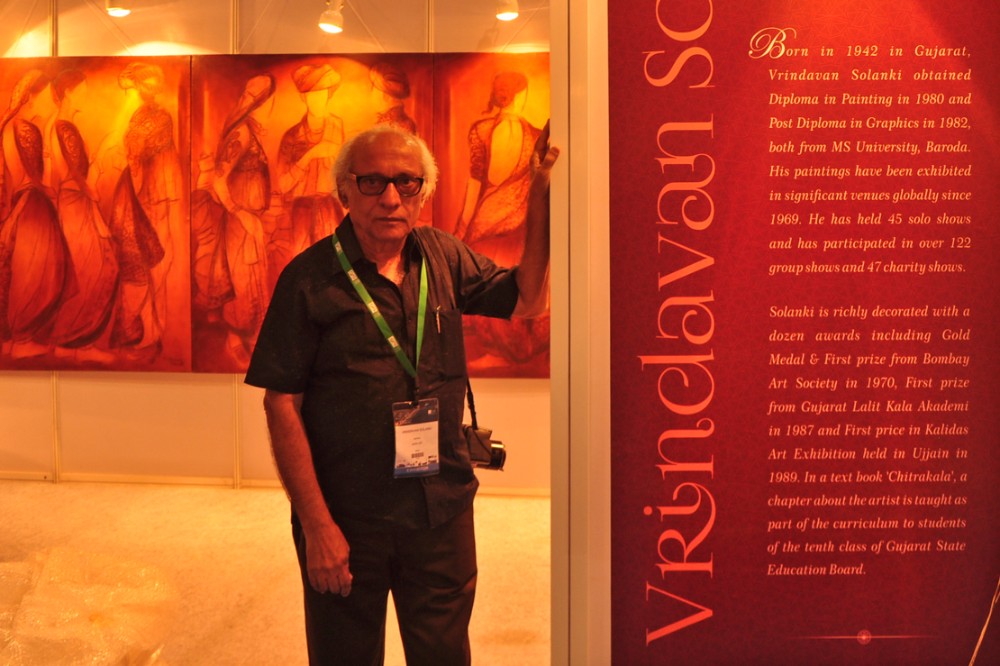 To be a student at Baroda’s MS University in the 60’s under the tutelage of stalwarts like KG Subramanyan and NS Bendre, meant that one was living in the midst of a major movement in the Indian art world – one that sought to reengage with tradition in a postcolonial context. During this period a final year student called Vrindavan Solanki, with the prodding of his teacher, put up his first exhibition of paintings at Jehangir Art Gallery in Mumbai in 1969 – back when the gallery rent was only Rs 50 per day. All the paintings sold out, prompting the tremulous young student to discontinue college and travel to exhibit his art. Back in Mumbai this October 2016, for his solo exhibition hosted by Aura Art at UBM Index Fairs, Solanki says that the city has always been close to his heart – “Mumbai made me an artist.” 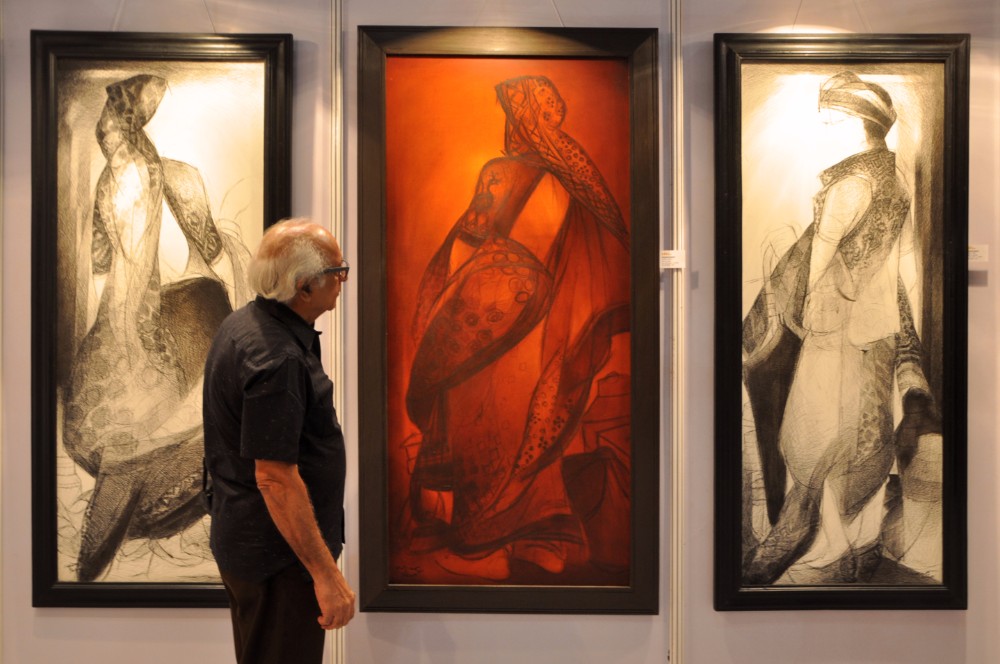 Hailing from a Gujarati business family, how did Solanki realise his calling in the art world? He explains by means of reverse logic – “What you choose not to do is as important as what you choose to do. From childhood I was not fascinated by business – in selling copper utensils and the like.” By fifth grade, he had decided he’d be better off as a painter, writer, musician or theatre person. Within a few years, he had tried all the mediums and decided to settle on painting.

Solanki is today a celebrated artist. Born and brought up in Junagadh, his continuing fascination remains with the Rabari tribals – nomads who wander Gujarat and Rajasthan, rearing cattle and selling milk products. The artist is drawn to their “innocence and purity”, and art critic Johny ML describes him as a “silent chronicler of his own land.” The highlight of this exhibition is a 12×4 foot painting portraying the nomads in various states of interaction. What’s striking about Solanki’s work is that male and female subjects stand on an equal footing – confident and poised. “Rabari women are very powerful,” Solanki emphasises. “They run their family businesses. They are the ones to ensure that the milk from their cattle make it to the markets in the morning.”

Of silence that speaks

While his subjects often have their backs turned towards the viewer, lending the sense that one is privy to a deeply private moment; the distinguishing character of Solanki’s work is the facelessness of his subjects and the ethereal glow that treads the space between their interacting bodies. He says, “We live with two faces – inner and outer. What we see often doesn’t express what is felt.” This explains why he is preoccupied with body language and movement, instead – graceful poses and intimate gestures of touch. And the glow that treads this space between bodies in his paintings represents the inner light within each of us. “There is silence and there is shanti,” he says. “But shanti also often contains sound in it. And silence also often contains a message.” It is this silent spiritual resonance that his subjects portray. He repeats, “What you choose not to do” – in this case, not painting faces – “is as important as what you choose to do. It itself becomes the story.”

Another distinctive quality of Solanki’s works is their monochromatic tones. He believes that colour is not always needed – for drawing is important in itself. Writes Johny ML, “The sepia tone that engulfs most of his paintings attributes a quasi-mythological feel about them. This aspect of Solanki’s works makes the viewer think about the protagonists in them as Krishna-Radha, and Radha and her friends.” Over the last 8-10 years, however, Solanki has started experimenting with bold dashes of colour interspersed within majorly monochromatic hues.

Alongside its spiritual role, for Solanki, art is also about representing time – about leaving a “message for tomorrow”. He seeks to do this by preserving the culture of the Rabaris – their flowing attire and embroidered textiles – which may change after a hundred years. Keeping with this vision, when he realised that works made with ink on paper do not last long, he soon switched to using oil or acrylic on canvas. But has the role of art in people’s lives diminished or increased in the context of a burgeoning art market today? Solanki laments that art today is being seen as property to invest in – “but art is not for investment, it’s for enjoyment.”

“You have to talk with your work, from the beginning to the finish,” says Solanki, who paints at his house in Ahmedabad, “Sometimes the canvas says ‘no’. That’s when I take a break from painting it.” This eclectic creative process is so personal that when the time comes to hand over his work to the galleries, he feels saddened, as if real people are leaving his house. When one chapter draws to a close, there is therefore a tendency to slip into a downward emotional spiral. The only way to escape it is to immediately embark on another project – “There is no end to creativity. You have to keep working. When that process stops, you are finished.” It is this belief that makes him an admirer of Picasso – who was ceaselessly energetic and prolific in his lifetime.

Solanki works around 12 hours a day, creating around 30-40 paintings in a year. And the Rabaris are not his only preoccupation, for he has painted subjects as diverse as New York city, the Ahmedabad pols, and the macchliwalas and dabbawalas of Mumbai.

He attains a lot of this energy by surrounding himself with young people. When he had returned to MS University to complete his degree, after ten years of travelling in the 70’s, he had found himself surrounded by students who were much younger to him. “I prefer being around youngsters, till today. They have new ideas about life and creativity,” he says. Yet, he adds, that their energy is often wasted in the pursuit of social obligations. “Also, they often want things readymade. Just exhibiting and selling your work is not enough – you have to talk to different people. The lack of this is the reason why very few young artists from Ahmedabad are doing well outside the city.” While in Mumbai in his younger days, he would often spend days sitting in the Press Club, exchanging thoughts with writers. “It’s important to understand the other languages of creativity – of writers, poets, theatre persons,” he says. And Solanki made many friends through this process – among them a young Prahlad Kakkar. Solanki amusedly recalls how Kakkar was once part of an impromptu squad that had formed to hunt down a painting of his that had landed up at a scrapyard – following a bizarre series of events that began when a collector’s unassuming maidservant handed over the artwork to a kabaddiwala.

An exclusive Solo Exhibition of Vrindavan Solanki’s art is being hosted by Aura Art eConnect Pvt Ltd – an organization that strives to sensitise people to “qualities that distinguish the extraordinary from the ordinary” – at the Art Enclave at UBM Index Fairs, a leading interiors, architecture and design exhibition. Be sure to drop by at Bombay Convention and Exhibition Centre in Goregaon, Mumbai, from October 13 – 16, 2016.