‘From Here to Eternity’ – Peeping in a Rollicking Past 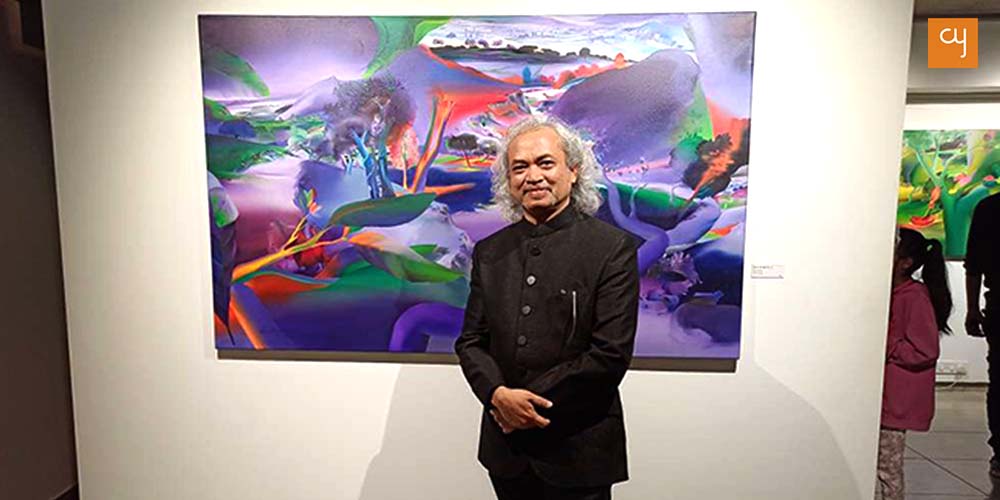 Nabibakhsh Mansoori is a popular name to reckon with both within and outside the art fraternity of the region. An art pass out of the coveted Vadodara based MSU’s Faculty of Fine Arts 1992 batch and of the 1991 batch of C N College of Fine Arts, Mansoori has twenty-seven years of fine arts practice behind his goodwill and name that rings a bell today, among the established as well as the younger and the upcoming artists; many of whom look up to him for guidance and inspiration with a sure sense of reverence.

In a pleasant coincidence then, Mansoori is back with what forms his twenty-seventh solo show; and it features as many of his newest works! He is showing this new series titled From Here to Eternity at Archer Art Gallery, the art-house that can also be credited with facilitating Mansoori’s well-carved journey thus far in ways more than just hosting his shows. The present show inspired by the Indian miniature tradition of several schools started last Friday at the new space of the Archer Gallery. 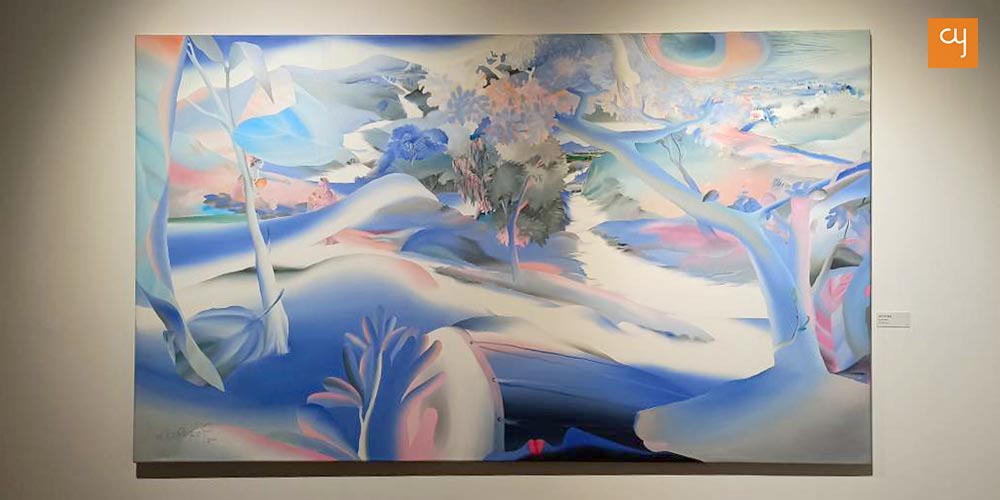 While much productive and much-awarded Mansoori’s major shows like Moving Malls of India (2009), Tiger Tiger (2011), Twilight (2013) and Wonderland (2017) linger in the memory of the regular art buffs here, his brush with the miniature and the central theme of the romantics of the quintessential and ubiquitous Krishna and Radha and generally with the haloed regions of Mathura, Gokul and Vrindavan – so essentially intertwined with the two – started back in 2019. This was during and after he completed his last series Kadamb. That series picked up its name after the famous and utilitarian tree of the same name that has been a lasting part of the many stories about Radha-Krishna and Gopis on banks of Yamuna that continue to live in the hearts of crores of their followers all over the world. Recognizing the typicality of the miniature elements Mansoori got so fascinated with this tradition that the idea of experimenting around these elements firmly germinated while he finished the Kadamb series for Vis-à-vis, The Art Therapy, shown in Ahmedabad’s Hutheesing Art Centre. 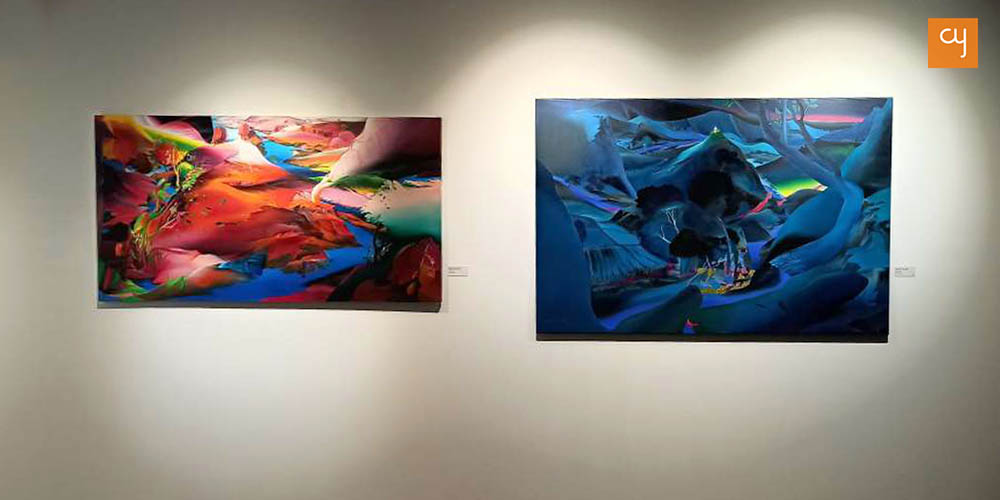 The year 2019 eventually got dedicated to creating the present series in pursuance of the idea, which not only draws on the miniature elements for style but also continues to dwell and enlarge on the Radha-Krishna-Gokul theme for content. In fact, it also adds on the legend of Meera in a work or two and juxtaposes her devotional love beautifully with the sweet overpowering romance of the lovelorn Radha! Shiva is the other God from the Indian pantheon who finds a majestic place in the singular work Goddess that deifies Kali and seems to replicate the shakti-puja in some way, while Krishna looks on!

The result of the year-long single-minded devotion by Mansoori is these twenty-seven fabulous works in all kinds of possible colour combinations that play on the miniature human forms of the two principal actors, Gopis and Gwalas, as also the water bodies, the flora and fauna – the meadows, the river, the cows, the monkeys, the birds and what have you – which have been created boldly yet subtly to make them blend with the overall colour scheme and appeal of each individual work. While the size, scale and features of the human forms comply with the miniature school, the colour shift and the ‘wonderland’ dimension given to all other objects in the frames make them a typical Mansoori creation in their final appeal! The works are thus created as some kind of hybrids of two styles and the subtlety of the ‘speaking characters’ becomes a hallmark in these works whereby you have to look with a keen eye to discover the actors and the supporting characters who may be concealed behind trees, bushes or rocks! 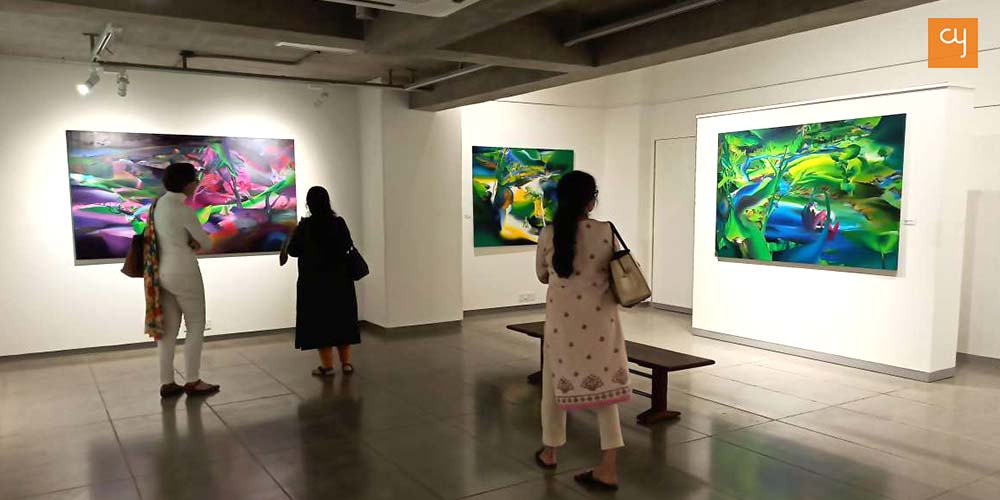 So we see exemplary works like Melodious Attention dwell on Radha and Meera in the same frame; Into The Blue bring out the bond of the inseparable two while they only have the pink love and rosy future to gaze at; Colours are Not Enough is a play on the hilore of Holi that runs deeper than the apparent revelry that comes with sprinkling of colours; Never Let Me Go, Letter to Heaven and Let Your Love Flow are about the pangs of love, longing and separation that Radha suffers from! You Just Keep Raining Like this captures moments of a frozen time between the two under an umbrella. A Pale View of the Hills and Their Eyes are Watching the God are more about the artist’s imagery of the locales that the context brings forth. But all of these seamlessly merge to create a whole in each work which are in the same class and yet produce their unique flavours when seen from up and close. 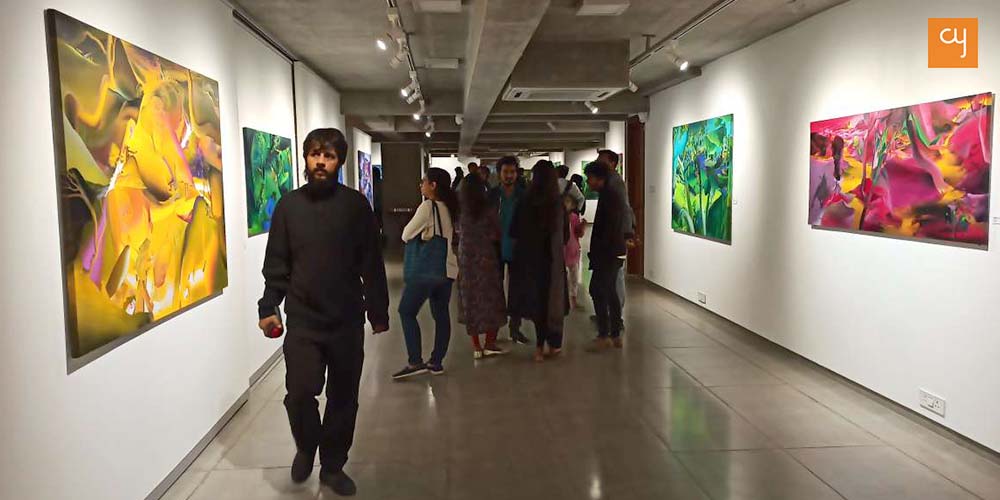 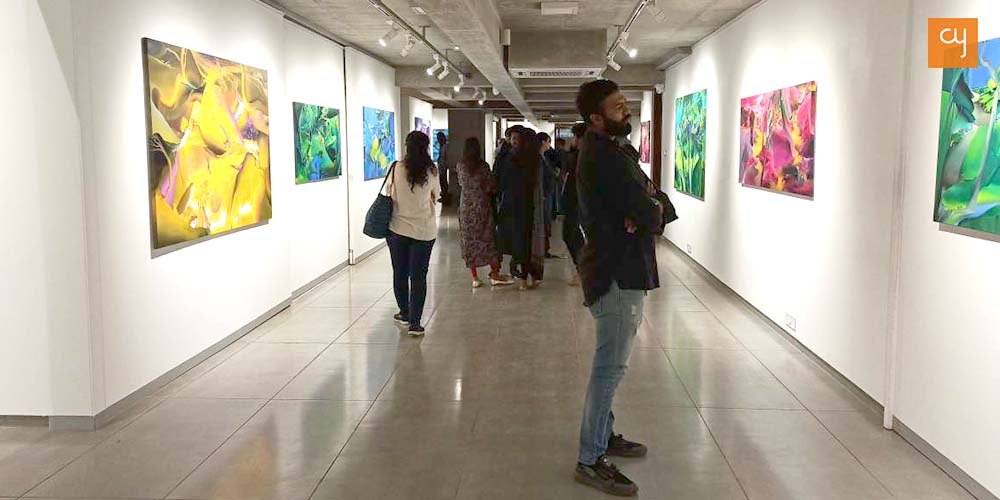 Mansoori is at his typical best ‘swaying in and out of reality’ – of a rollicking past in this case – while he makes resort to his signature ‘dramatic use of light, unconventional perspective and bold (luminous) colours’, not merely by his own claim of his work, but by an ample taste created on the ‘palette’ of the spectator. The mesmerizing visual treat is served on canvases all created in oil and in sizes ranging between 36” by 48” to 48” by 72”and more. If you are an avid Mansoori follower, you are most likely to find an interesting piece here. The show is highly recommended both for the repertoire served as also for the fine display that comes with Archer’s fitting environs for art shows. The show runs till Feb 29.