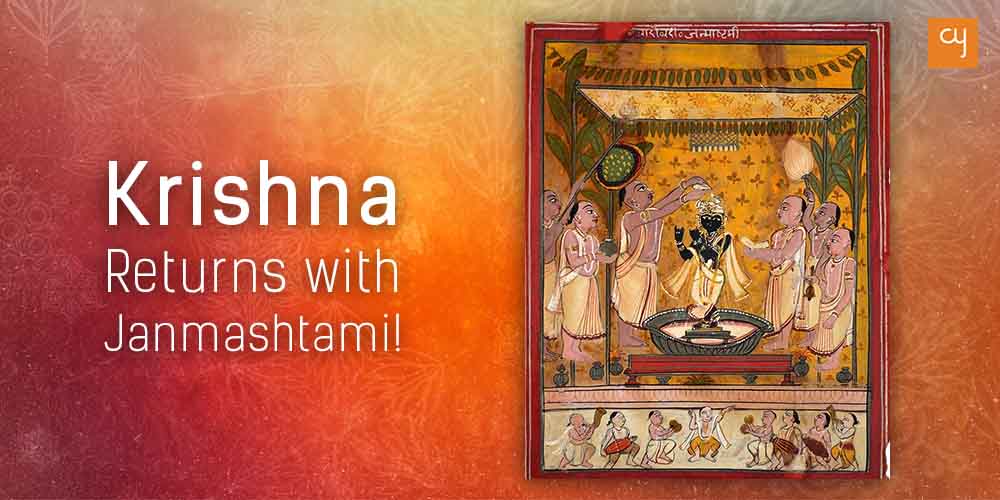 As you walk into this exhibition on Krishna you recall that in February of this year – the month before in March when most of the world closed down for things public, we had two exhibitions devoted to Krishna almost back to back, or say happening concurrently. The first a solo show at Archer came from Nabibakhsh Mansoori that had Krishna and his milieu in Gokul-Mathura-Vrindavan; and the other a group show Krishna The Infinite was mounted by Aura Art, Mumbai at Hutheesing Centre. Both the shows were pretty well received for their respective worth even as the group show was shorter in duration. We then closed the spring time as also the art viewing in galleries in Ahmedabad for well over four months but not before a show of photographs by veteran Jyoti Bhatt in the first week of March. 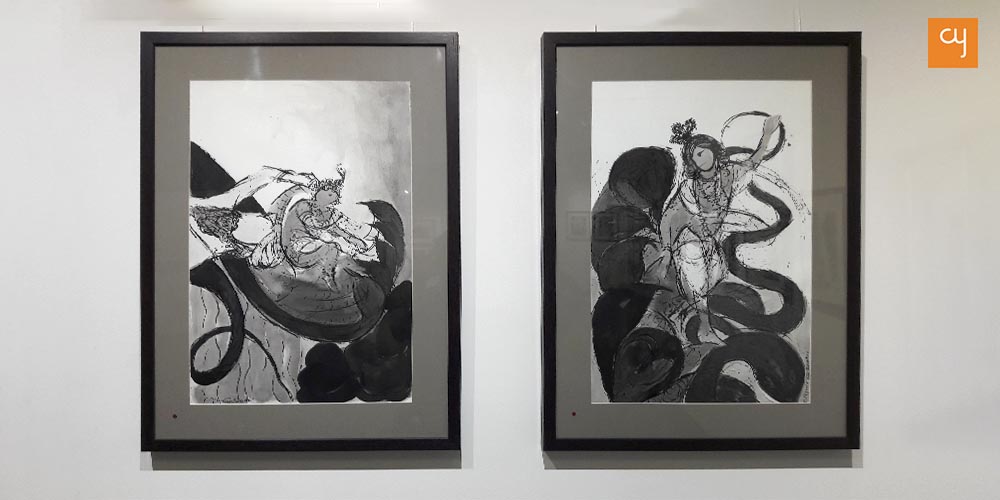 Now that we have returned to staggered and dispersed public viewings of art sans a formal inaugural for obvious reasons earlier this week, courtesy Archer Art Gallery, Krishna was the flavour of the season though without the usual fervor that surrounds the romantic Karmayogi’s birthday on Krishna Janmashtami in the month of Bhadrapada of the Indian calendar. This year it fell on August 11/12.

But fittingly, this exhibition at Archer Art Gallery just tries to create the mood that was missing, at least in some ways. The show with its ninety odd works taken out mostly from in-house collection of the gallery and more held back in the warehouse, does offer a reasonable variety in terms of schools of art, themes, media and timing of their creation since the early nineteenth century to which time we peg a range of miniatures and a whole set of lithographs on paper with original works created by Marathi artists that had the distinction of being printed in England. 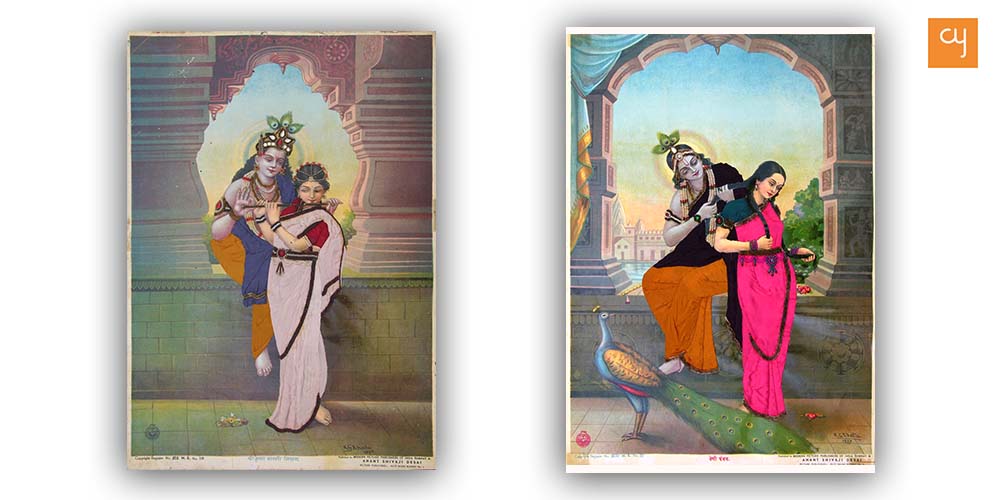 The lithographs you find here have a different feel when it comes to the facial features of the subjects Krishna and Radha. This kind of reverse printing in England would change the facial and bodily characteristics of the subjects, lending them an alien touch, informed Manan Relia of the Gallery. Be that so, the works of this class and category adorn a full wall in one corner of the Gallery while two embellished lithographs namely Bansuri-Shikshan and Veni-Bandhan stand out even more. 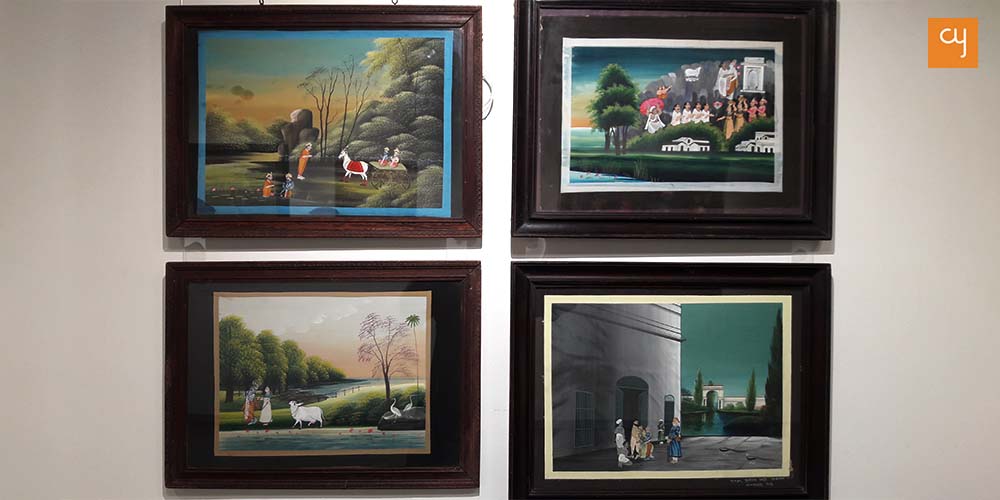 If you are tradition fascinated, you have for your viewing pleasure a complete range of Krishna themed miniatures in water colours which are displayed just after the entrance. Having works from schools like Karauli, Jaipur, Devgarh, Datia and Nathdwara, this range by unknown artists except some works credited to Khubiram, possibly forms the best that there could be at the show for the artists’ neat and sharp depiction of the Krishna themed works. The figures and landscapes created by Khubiram and others are just fascinating! This range has the oldest work from Karauli School dated to 1820 and another to 1821 while others from Jaipur and elsewhere also belong to nineteenth or early twentieth century. All these works showcase the fine class of the master artists of the early times engaged in the pursuit of miniature craft and no wonder, some of these works have been registered as non-exportable!

These works have a whole range of the legendary themes like Krishna taking a stroll on the river bank, having a boat ride, enjoying the swing in the cool courtyard of the house landscaped so beautifully, playing pranks with gopis taking their bath in Yamuna (Vastra-haran), and so on. 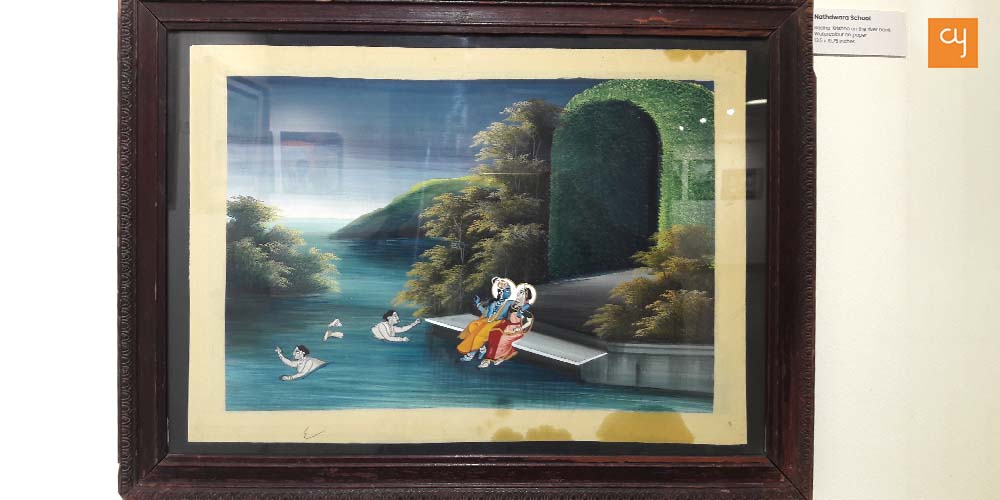 Another big chunk of works on display comprises of Nathdwara Pichhwais that vary in sizes of about three-foot to about six-seven-foot, all coming out from the Archer collection. This range of Pichhwais depicts Krishna in His dark Shreenath avatar with the fineries and the embellishments and other subjects with incumbent details. Pichhwais as art buffs would know are art works about Krishna created on cloth in Nathdwara School. 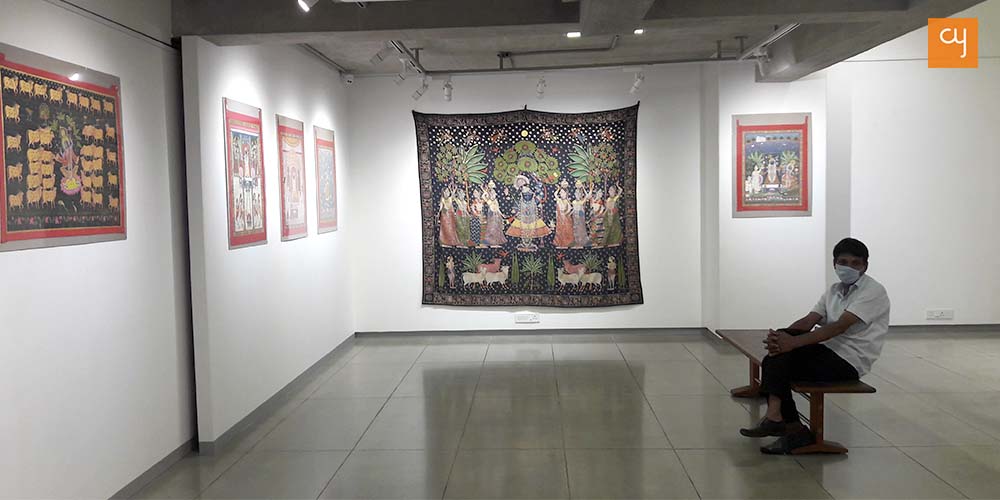 In the contemporary category we have a good chunk of original works from Nabibakhsh Mansoori (both water colours and oils) and Bhairavi Modi (acrylics from her Leela Series of 2013). We also see quite a few originals from Gujarat masters late Somalal Shah, late Haku Shah (both serigraphs and oils), Amit Ambalal (soft pastels with water colours), Manhar Kapadia (Neel-Kamal – Mixed media) C D Mistry (oils), Jyoti Bhatt (Sorath Malhar/ silk screen on paper) and Vrindavan Solanki (ink on paper) in their signature styles. While works titled Megh-Darshan, Svar-Mugdh and Nag ne Haravyo by Somalal belong to the conventional yet interesting themes and extend the water-colour range in the show, the last water-work in the show by Vasudeo Smart titled Removal of Untouchability draws on the social side of Krishna and stands out in a way!

Works by other masters from elsewhere are mostly Serigraphs on Paper or Offset Prints produced by Archer over time and include Hussain (Krishna/Leela an acrylic and two serigraphs), Jatin Das (Radhika and others), Jaminy Roy, Thota Vaikuntam, Madhvi Parekh (Kalia Daman) and Manjit Bawa (prints in Bhavna series) except Seema Kohli’s original Krishna Krishna Raas which again has very rich details all over the canvas done in ink and acrylic with gold and silver leaf. While most of the artists have preferred to portray Krishna in His conventional swaroop with the feather tied on his forehead or hints of it, Haku Shah and Bawa depict him rather refreshingly in some more humane imagery, as have some others like Wasim R Kapoor, Sukanta Das and Nayna Kanodia done, whose works were seen by us at Aura Art’s show earlier in the year.

This show of ninety works together with sixty-odd works detailed on Archer’s website provides an interesting range on Krishna themes that continue to eternally enchant viewers both for their faith and an eye about aesthetics and experimentation. A good watch in this lean season, the show is available up to September 30th between 11 am and 7 pm daily, barring holidays and Sundays. But don’t forget your protection when you go!