Prakruti-Purush at Archer is an Enchanting Exploration of Shiva 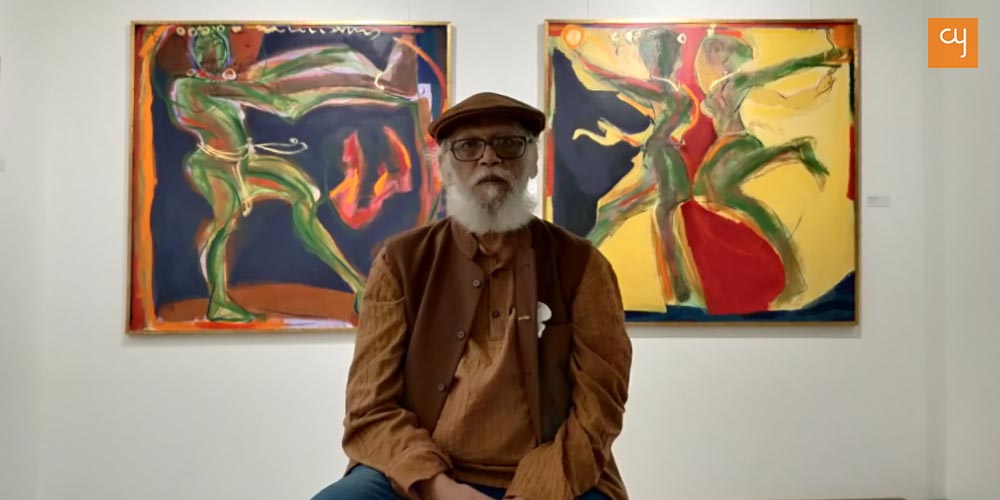 When the Archer Art Gallery by the father-son duo of Relias commenced its elegant space in 2018, it had shared its vision of bringing for viewers and collectors a mix of local and national artists. Even as some of us may not be happy with distinctions applied on a ‘regional’ or ‘mainstream’ national basis in the realms of art and literature, we do come across such understanding and classification in practice.

Viewed in that context Archer has lived up to its self anointed credo and done its best for actualizing this mixed approach in spite of the hindrance posed by the Covid-19 during the interregnum since March 2020 and till recently, technically even in the instant. 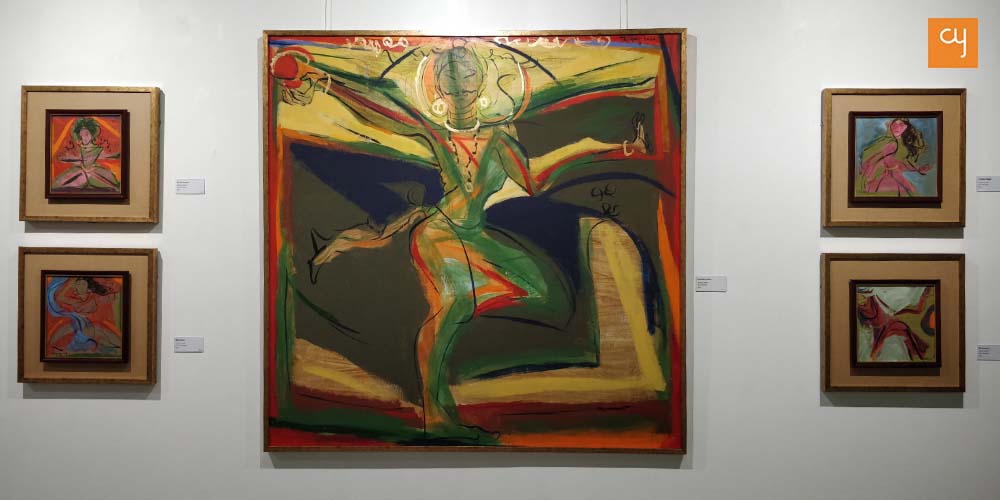 So we have seen solo shows by Amit Ambalal, Bhairavi Modi, Nabibakhsh Mansoori, Vivek Desai identified more with Gujarat and also of Madhavi Parekh in collaboration with Delhi Art Group and then a Group show with 13 other stalwarts on the other end. The fare provided has also alternated between retrospectives and fresh works again in keeping with that mixed approach, which prompts us to say mixed approaches in all realms are akin to the middle path and always tend to find a wider appeal with connoisseurs, audiences and readers.

It’s with this steady and fine approach adopted by Archer that Ahmedabad is now getting to see some fresh fare from the much celebrated, prolific, versatile and widely seen, discussed and debated artist Jatin Das who has been on the scene now for about six decades having indulged in painting with multiple media, sculpture with also with various media and murals in the same vein. 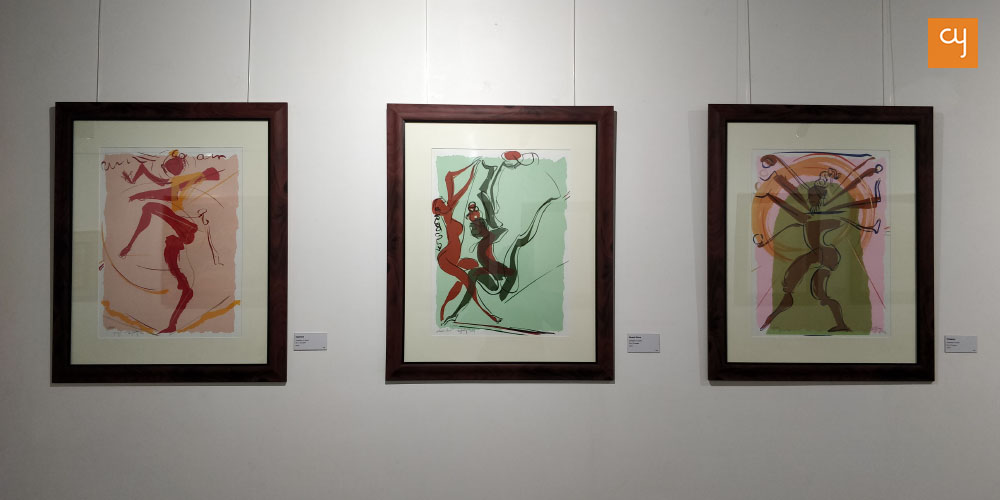 While the name needs no introduction thus, Archer made the best of his frequent visits to the city for a corporate assignment for murals since 2019 and has put up his show Prakruti-Purush, an entire series of 110 works in varied media that dwells on Shiva with a few works brought in for Parvati.

Within his wide acumen as a fine art practitioner and even a poet, Das incidentally has a reputation and track record for murals having done a giant one of 7′ × 68′ at the Indian Parliament Annexe in 2001 and some Facade Murals at Chelsea Art Club of London in 2009 and also at some other public places and commercial locations like airports and so on, thereby also bringing art to the public places. 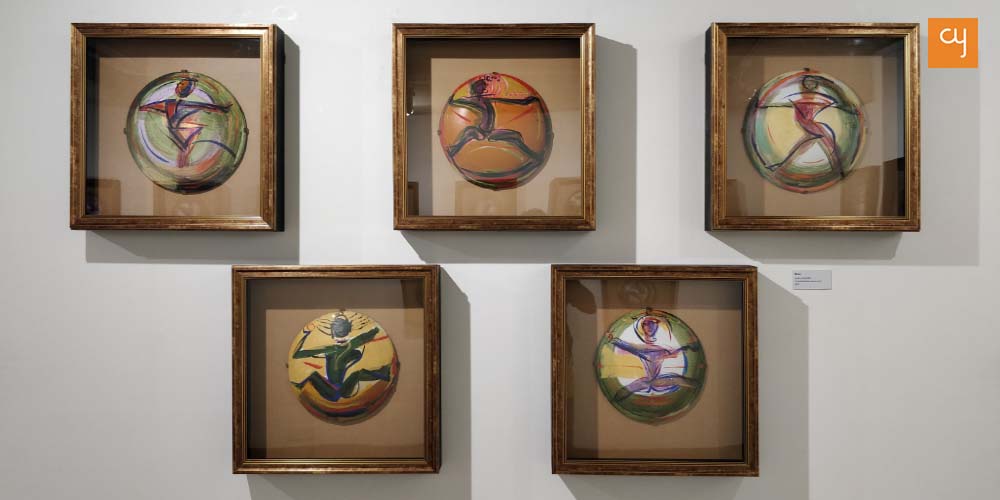 The Prakriti-Purush show started on Saturday, the 20th with a well attended Inaugural Reception where the lovely crowd of the artists and art lovers of the city also greeted Das for his upcoming birthday round the corner on December 02.

Prakriti-Purush denotes a concept about the communion of the feminine nature, nay the earth, with the cosmic energy all around which is perceived to be masculine. This Indian concept about the ‘primal being’  the all-encompassing world-soul ‘Aadi Purusha’ finds perhaps its first references and origins in Shvetashvatara Upanishad under the Vedanta stream and interestingly also has detailed mentions in the stream of Sankhya Darshan. 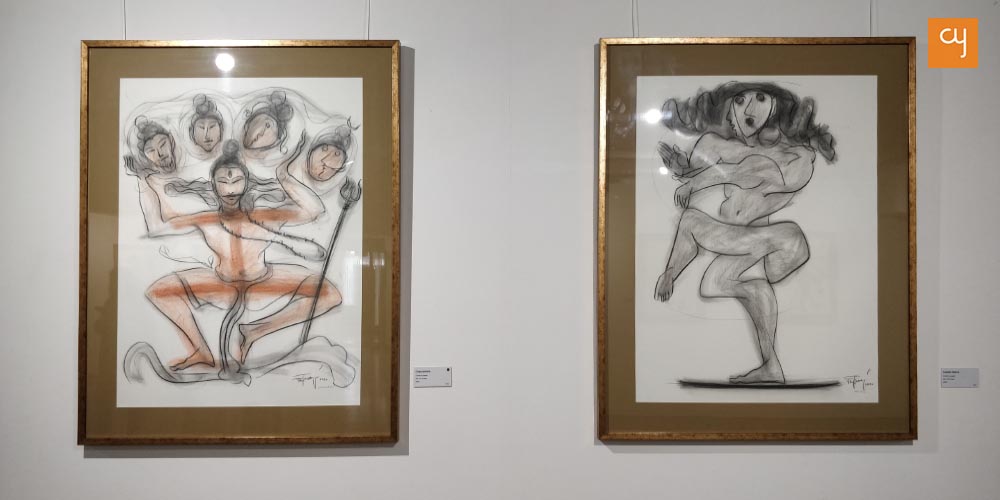 This theory even more interestingly also has parallels in Greek, Roman and Persian schools of philosophy and culture. Here in the series by Das under reference, it’s Lord Shiva that becomes the chosen incarnate while Prakriti is obviously equated with the Shakti rupa as we know in the Indian context.

Das himself claiming to be hardly a religious person and not having any ritualistic habits, however, picked up his reverential inclinations for Shiva from the religious traditions of his family. This seemed to have seeded an expressive yet an apparently less known, if at all,  urge inside the artist for this eventual and massive portrayal of Shiva fructifuing in a whole series. This started finding greater expression as his impetus grew in keeping with his ‘natural evolution’ – once he started working for the corporate murals about Shiva – and this series is now before the world both in physical as well as digital form, thanks also to Anil Relia who aporoached, invited and pursued the artist for the purpose after seeing the aesthetic appeal of the murals in process. 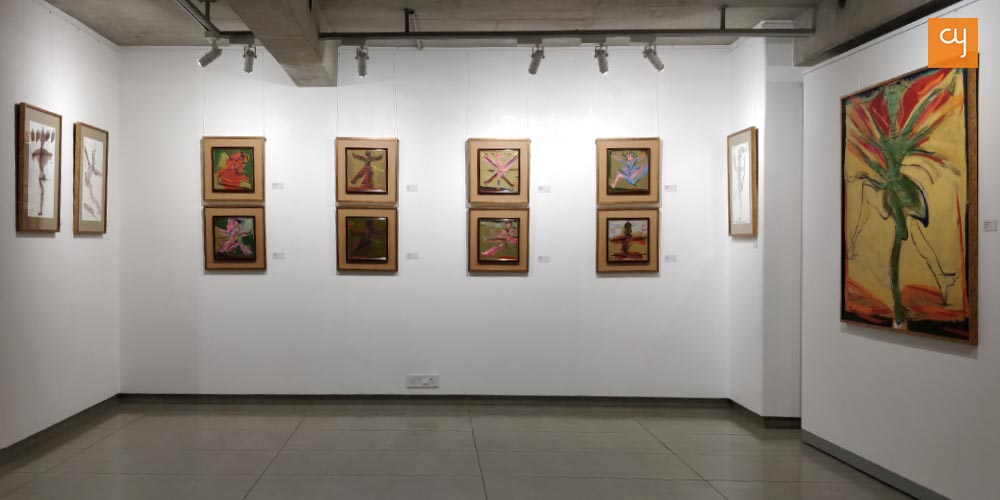 The series that started with ten serigraphs being created at Archer studio in 2019, grew in 2020 and 2021 to a tally of 110 and as shown in the exhibition dominantly has acrylic paintings on board which are variously sized in square shapes of one foot, two and a half foot and four feet. This colourful category with the stamp of the artist style has titles like Universal Shiva, Shiva in Prayer, Shiva Shakti, Green Shiva and Shiv Tandava. Even as all works have adequate use of the colour green, one work is specifically named ‘Green Shiva’.

The ‘Tandava’ work beautifully captures the dynamics of ‘Raudra’ through enchanting strokes denoting motion as if of several arms and legs added to the dancing-in-anguish-form of Shiva. The titular work Prakruti-Purush is a small sized dark-hued study and so is the work titled Amrtyu. The work Neelkanth obviously has Shiva’s neck, face and upper torso done in blue in keeping with the legend about the rescue act of ‘vish-dharan’ in the aftermath of Samudra-manthan. 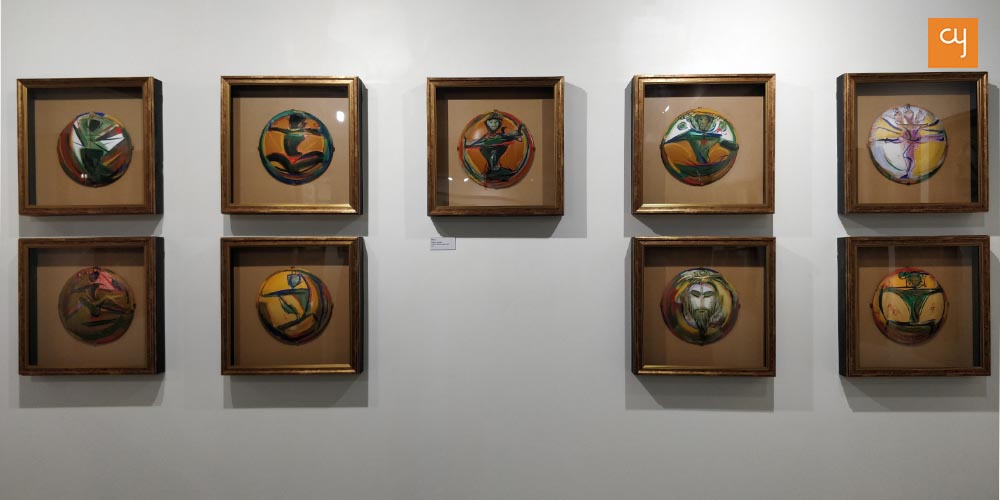 Then there is the Conte-on-Paper series which includes interesting works showing the Lord’s Tribhangi form – the three faces or three mudras at once – and His act of admeasuring the earth in one step.

We also see in keeping with the artist’s forte to draw bare forms, the “untitled bare series” of smaller drawings in pen and ink rendered on paper which capture many forms and legends associated with Shiva.

Shiva’s ardh-roop Shakti has been depicted both exclusively as also in conjunction with Shiva. The works Bhairavi, Shakti, Mahadevi, Tandav Shakti fall in this class of Shiva’s consort. The show includes a score of untitled ink-on-paper works all sized 22″ by 15″ which have an exquisite appeal of their own; some eight etching prints which are rather unilateral visually and score or more works in acrylics done on terracotta plates of 10” diameter – known locally as tawdy.

We finally see in the show ten classy serigraphs – limited edition finely processed reproductions of 100 pieces for each selected work – which have very very interesting titles as well as a finish of sheen that captivatingly draws you in, so also if you are a budget buyer, more so when you are looking at a pricy artist of long standing! 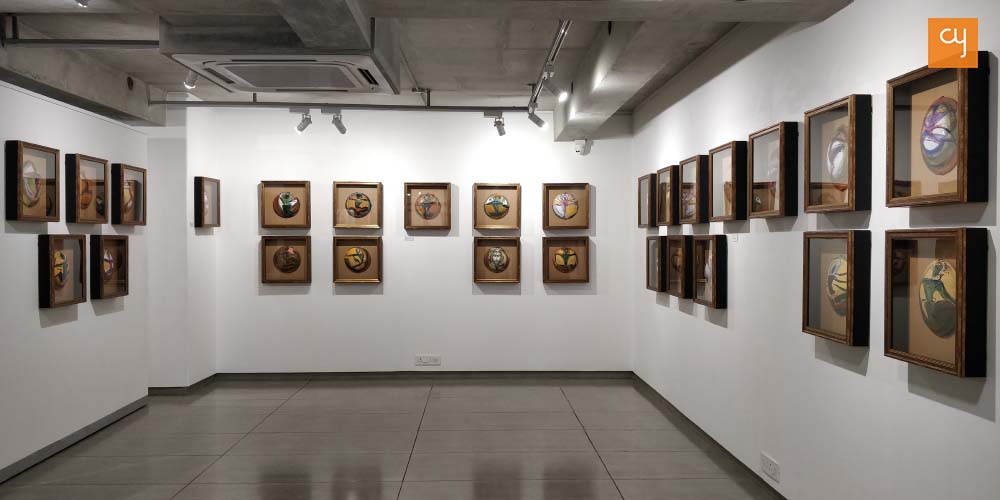 A table on the exhibition sidelines displays dozens of books and catalogues about Das’s work, his persona and his shows all over the country and elsewhere. A catalogue of portraits done by Das on request or otherwise of his friends or other personalities provides an insight to the enchanting collection of 800 plus portraits done by the artist over time, surely a pointer to his innate prowess to draw human forms with great verve and intensity! A show by a tall artist of his own unique standing, this one is just unmissable for artists and art lovers to learn, understand and hone the artistic expression; and for collectors to choose and pickup their ‘Das Capital’!

This show is on till December 11.