Krishna The Infinite by Aura: A Show that is sure to Create Spiritual Bliss! 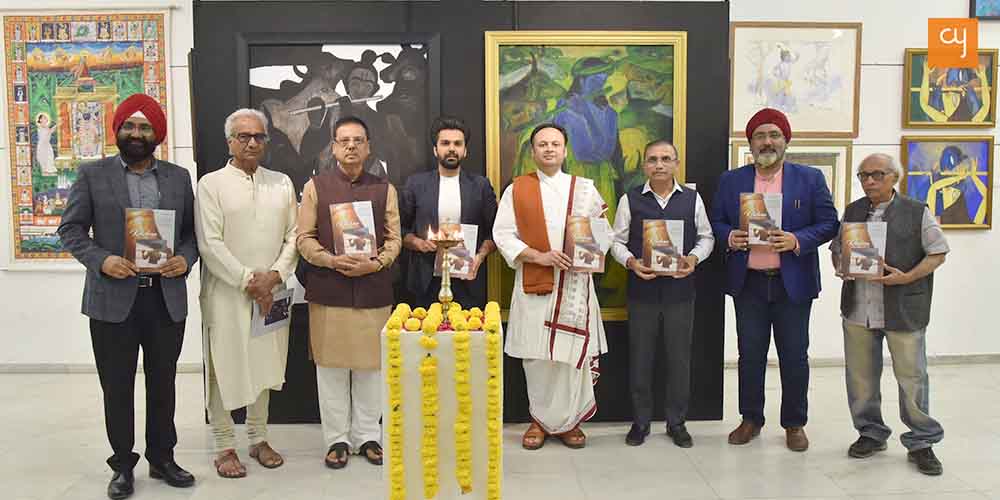 Krishna the Eternal has undoubtedly found more expression in arts, music and literature than His other two incarnations in Lord Vishnu and Lord Rama in the Vaishnav pantheon of Hinduism. While Bhakti kavya in Hindi and vernacular literature is a genre by itself and early poets like Jaidev and medieval poets like Surdas are known for the branch called Krishna kavya – devotional poetry about Krishna – dance forms from Manipuri to Kathakali and others also dwell on Krishna Leelas and anecdotes from His chequered life in their wide repertoire of rasas.

Krishna’s shringarik, philosophical, spiritual and political influences (lalit gopal, yogi-dharmahtma and veer-rajnayik) are great and unparalleled in as much as Srimad Bhagwat Geeta a treatise attributed to Him has a world view that is truly transcendental of the boundaries of time and space! So much so, that the treatise has been lately used internationally to sift out wisdom for even modern day management in all domains of human life. The International Society for Krishna Consciousness (ISKCON) is known to spread the principles of love and karma that Krishna espoused and stood for. So much so that you can find a volunteer distributing a copy of Geeta at any tourist spot of US!

Krishna as a subject in painting and sculpture has also been a very popular pursuit from times immemorial. From miniature schools to folk forms to popular Pichhwais of Nathdwara’s Shrinath ji swaroop to continued contemporary interpretations of the persona and accomplishments of the revered and much loved Krishna by newer generations, his anecdotal life has been portrayed profusely and the whole body of these works have had tremendous aesthetic and devotional appeal. Radha, Gopis, shepherds and Balram form the essential consort/s in the numerous interpretations. To actually highlight Krishna’s omnipresent and all time, the appeal may we recall that a current exhibition by Nabibakhsh Mansoori at local Archer Art Gallery has Krishna (and Radha) at its core!

But Aura Art of Mumbai has, in what it calls a first, put up a grand and exclusive show of paintings and sculptures on and about Krishna in Ahmedabad in what is also the fourth appearance here for the art house since 2011. The show that started at the Hutheesing Centre on Saturday evening is showcasing 100-odd works from about 50 artists from all over India; and the selection can truly boast of a wide variety forms, styles, stories and experimentation about Krishna tales all of which make it an excellent experience under one roof from the very word go.

The show that was started by Goswami Shree Dwarkeshlalji in the presence of some patrons and associates of Aura Art and its Director Harmeet Singh Sethi has forms as diverse as Pichhwais by Piyush Sharma; Rajasthani miniatures by Mahaveer Swami and other unknown painters; Nathdwara miniatures by Ajay Garg; Chitrakatha style by Jayshree Patankar; Gond tribal artworks by Venkat Raman Singh Shyam; Pattachitras of Odisha by Arjun Prusty; an admixture of Pattachitra and Pichhwai by Dilip Prusty to contemporary and realistic works by a host of other artists, including a few from Ahmedabad. 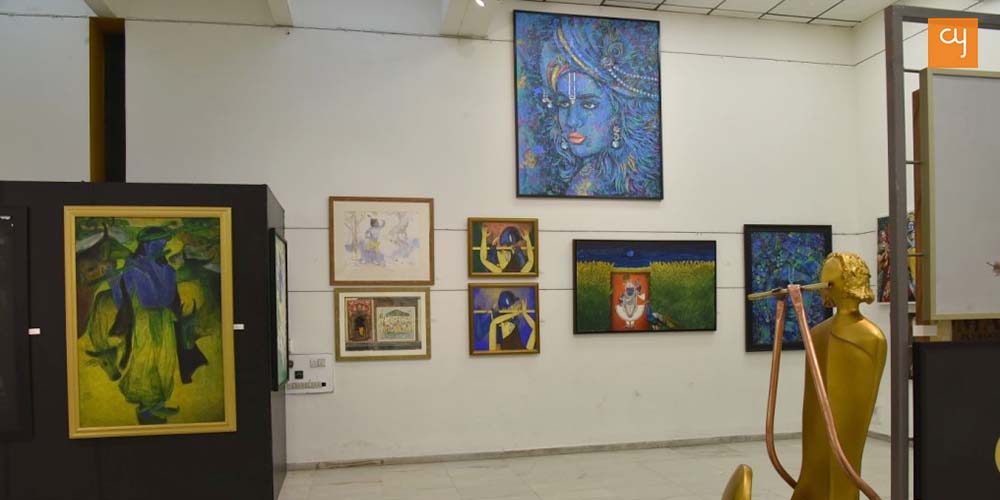 Besides the Aghasur work by Amit Ambalal, among Amdavadi artists, Vrindavan Solanki is showing two giant works – an oil and an acrylic – embodying Krishna in a rather different and off-beat take; Ruby Jagrut is showing a soft-hued work in natural dyes (something she knows innately) on canvas that has details; while Ratilal Kansodariya and Nayana Soparkar are showing their sculptures – Nayana’s being a work in fibre in colour of and as pitambar! 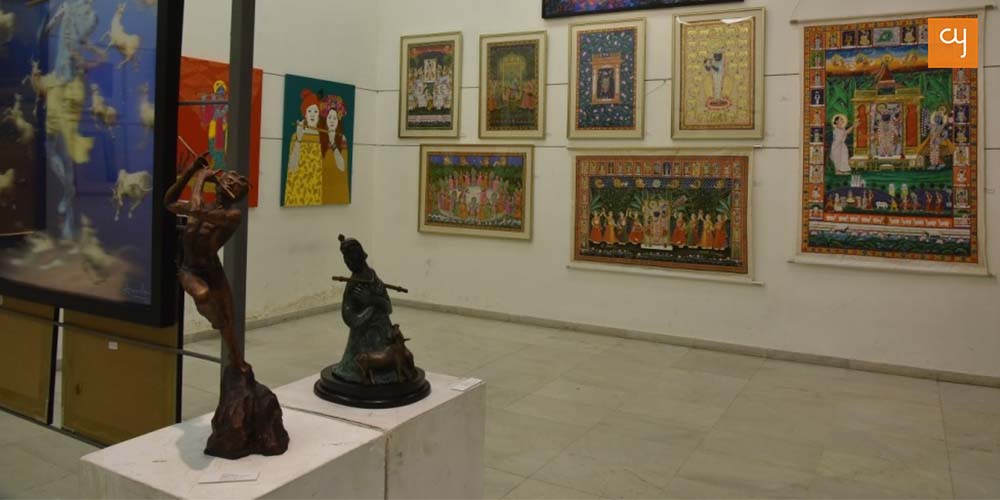 While viewing a variety of forms and styles amid conventional takes on Krishna stories what you find strikingly different and yet anchored to the essential Krishna is the depiction by Wasim R Kapoor in two of his oils on canvas; one of these forms the title picture for the beautiful catalogue of this more beautiful show! Krishna here is painted as a realistic form, rather than in the usual imagery associated with his depiction. Similarly, Sukanta Das of Kolkata paints the ‘tattooed versions’ of Krishna and Radha using mixed media in what is his Abhisar series; and he leaves an unusual appeal with the soft hues that he creates. There is also a conscious depiction of sensuality for expression of the abhisar between the two friends, lovers and soul-mates! Nayana Kanodia goes a step further in imagining the duo in the modern times as she portrays them travelling together in a vintage car along with their ‘miniature cow’ on the footboard. She also juxtaposes Krishna with other modern day couples where the foreground is usurped by the latter while the former is portrayed as the omnipresent Lord bestowing his blessings from above! 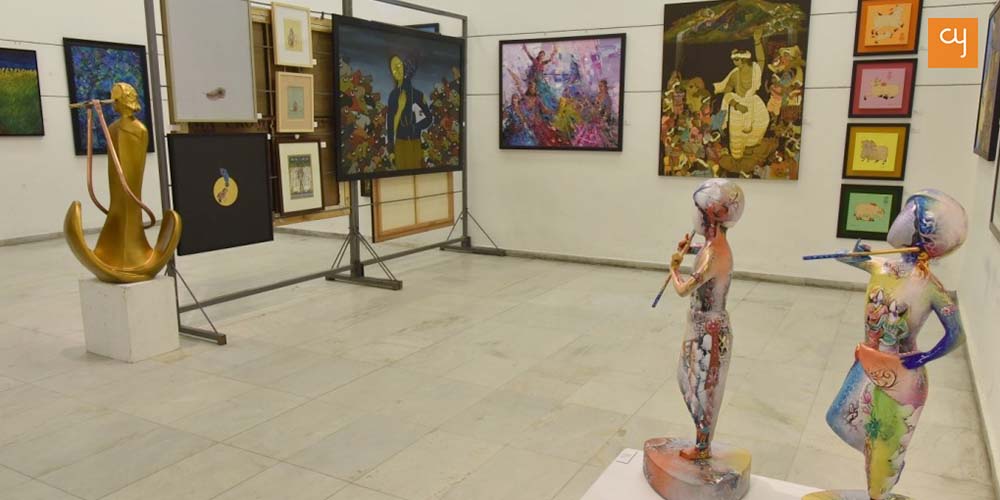 Besides the obvious detailing in their entire range by the concerned artists in the Pichhwai and the Pattachitra works, other artists like Akash Choyal (who produces a Triograph in Lenticular technique), Shail Choyal, Ramesh Gorjala, Avinash Karn and Venkat Raman Singh pack a great deal of detail in their works; while Thotta Vaikuntam and Shuvprasanna stick to their signature styles which remain fascinating as ever. Pranav Goswami is noticeable for both detailing as well as showing a unique styling of the objects in his three acrylic works titled Snan Yatra, Shwet Kamal and Divine Touch.

The proceeds from purchases at the six-day show will partly go to two charities Madhuram Charitable Trust by Shraddha Soparkar of Ahmedabad and RAAY foundation, Mumbai by Amit and Ruchi Patni. Both entities work for differently abled children. In a pleasant coincidence with the theme of the show and the inaugural ceremony, Shraddha dramatically invoked the Virat roop of Krishna in a poetic recitation from late Hindi poet Dinkar’s epical work Rashmirathi (1952).

An absolute joy for aesthetes, this show is also a must for devotees of Krishna from any sects, as this is sure to fill them with a sense of love and ananda! Highly recommended for a visit this show is on till February 27.