Journey of Bhairavi Modi: Immortalising heritage and tradition through art 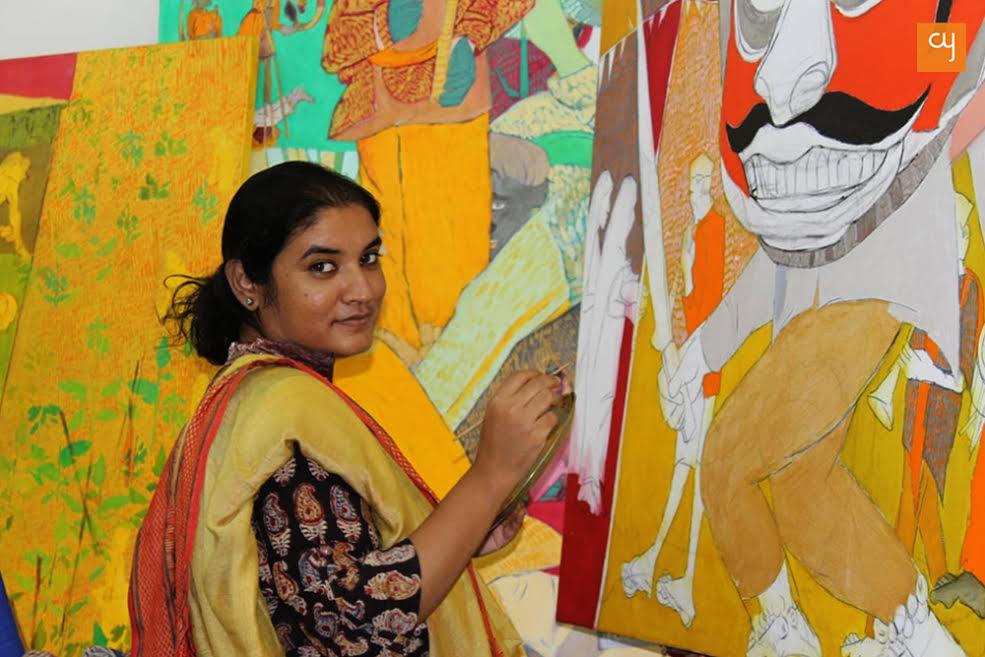 Known for her penchant for heritage, folk and tradition, Bhairavi Modi, with her new collection sets her gaze upon Gujarat’s tribal culture. Set to open at Archer Art Gallery on September 7th, When the Pavari Calls will be her 9th exhibit. In this piece get to know about the introverted artists’ journey and inspirations.

A friend, after learning about the “Journey of” series that documents the lives of artists, told me about Bhairavi Modi—how she had spent the last four years visiting Dang region of Gujarat and capturing its tribal rituals, the culmination of which would be in “When the Pavari Calls” art show. Intrigued by this, I contacted her and requested a meeting which was I was lucky to have been granted.

We met at her studio which is in the basement of an old building in Navrangpura. The studio was spartan with the canvas she was painting on one side and her old paintings, reference books, and clay sculptures collected from Dang on the other. She herself was far from the image of an artist that I had carried in my mind so far. Dressed simply in a salwar kameez with a round face, almond brown eyes and an innocent smile, she gave me the impression of the friendly neighbour who rings the bell to deliver a bowl of delicacy that is cooked in their house that day.

An introvert by nature, it took some time for our conversation to gain some momentum and rhythm. And once it did, I asked what seemed to me the most pertinent question at the time: why did she choose to become an artist?

“I never had any aspirations to be one till I was in the 4th year of [my course in] Fine Arts. And then too, I had many doubts and confusions. But after you walk on a path for long enough, you reach a point from where your only option is to keep walking further. In other words, mane biju kai avadtu nathi (I don’t know how to do anything else),” she says and breaks into an innocent laughter.

Born in Nishani Khadki, Khadia, Bhairavi spent the initial years of her childhood in the pols of the old city. Living in a large joint family, and experiencing the ‘pol life’ in all its colours, sowed the seeds of the very “being” of an artist as well as of what would become an inspiration for her art in the future.

“You need a certain sensitivity and empathy to be an artist. I think living in a joint family and in that community gave me those qualities. The shared celebration during festivals and shared fear during curfews gave me this strong sense of connection with everyone around me. Without that experience, I would have been an isolated introvert lost in myself.”

Later on, her family shifted to Thaltej and then shifted again to Navrangpura. Each relocation contributed to her personality and her thinking. While at Navrangpura, her mother enrolled her into a drawing class which she did not enjoy at all.

“Mane koi ras nato ane majjha pan nati aavti. (I had no interest and didn’t enjoy it either.) My father was an architect and hoped that I would also become one. So, for my parents this made sense as these skills would be useful for the entrance exams. But I didn’t like it at all, and the teacher was strict which didn’t help. But I continued for a while nonetheless.”

Not keen on taking science, which was required to be an architect, Bhairavi took commerce and also enrolled herself in CN College of Fine Arts. She pursued her studies in commerce as well as fine arts at the same time. But till the 4th year, she was uncertain of her path.

“First three years of Fine Arts, I would be either last or second last in terms of ranking. It wasn’t until 4th year, when Nabi sir became our teacher that something sparked within me and I started thinking seriously about being a painter.”

Mr. Nabibaksh Mansuri (“Nabi sir”), a noted visual artist from the city who is also an alumnus from CN, became her mentor who broadened her vision and approach. With the work she did in the 4th and 5th year at CN and with a new life goal to become a painter, Bhairavi got into MSU, Baroda, in the first attempt. And that changed everything for her.

“There is something is the air and water of MSU, Baroda. It doesn’t matter if you want to be an artist or not, the vibe of that place is such that you will become one. Plus, the cosmopolitan crowd who were my classmates and colleagues had a positive influence on my vision, approach and style in ways I hadn’t imagined.”

The Homecoming and Becoming

After Baroda, she chose to return to Ahmedabad, instead of staying back or relocating somewhere else for better prospects. Her father’s architecture office became, and remains, her studio. And thus, began her journey as a painter, blessed with the guidance of those masters that only fortunate few manage to get.

“I am very privileged and lucky because I received the right guidance at the right time from people who were already the greats of this field. Other than Nabi sir, I had the fortune to work with Ebrahim Alkazi ji for a few years. He would send handwritten letters full of advice on how to improve my work and vision. I still read those letters whenever I feel low and depressed. After that, I was mentored by Anil Relia ji, whose vision and understanding of the market paved my way forward. And I have been associated with his gallery for many years now.” 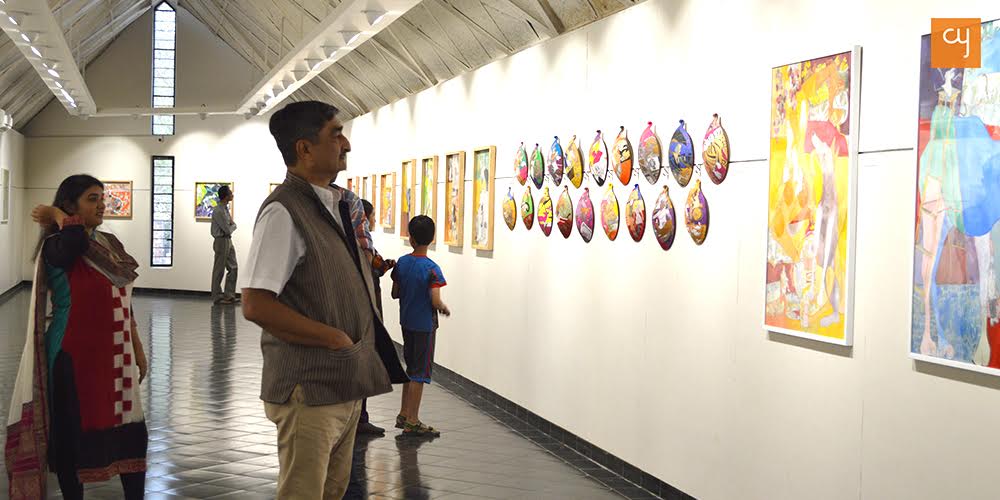 In the last decade, Bhairavi has done extensive research on the heritage, monuments and folk stories of Ahmedabad. All of it has culminated into vibrant, figurative paintings of our pols, our monuments and our folk tales. She has also painted stories from Panchtantra, albeit reimagined in her own way. She spent the last four years researching the tribal festivals and rituals in the Dang region, which has resulted into When The Pavari Calls, her exhibit that opens on 7th September, at the Archer Art Gallery in Navrangpura. The new collection, by far, will be the first such attempt by any artist from Gujarat to interpret the tribal life and culture and present it in a contemporary way.

On being asked why she chose to document history and heritage, and what the bigger vision was, she said humbly:

“I have a lot of affinity and love for our heritage and history because I grew up here. But I didn’t think in those terms. I didn’t have an end goal. I love exploring and learning more. So, the paintings and exhibits are the by-products of that exploration. An excuse to explore. If I see anything interesting, and I mean literally anything, I want to find out more about it. That’s my process. That’s how all my paintings came about. And that is how I will continue.”

Other than this exhibit, Bhairavi has also been working on a picture book on the folk stories of Ahmedabad. And soon she plans to start researching on Nathdwara which has caught her curiosity for a while now.