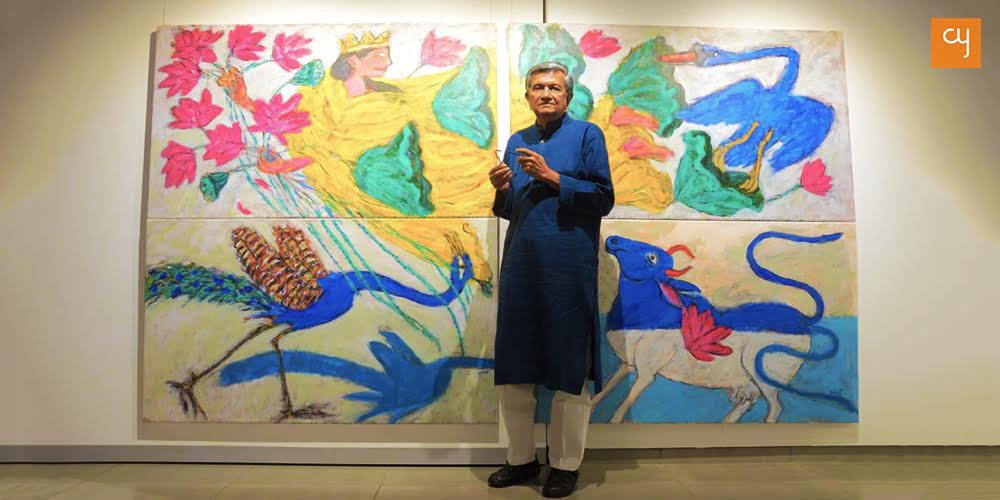 As the exhibition title “Adventure” suggested, Amit Ambalal’s latest show took us on a visual and educational adventure. Through his works, we were invited to explore archaic periods from Hindu mythology. Browsing through the exhibition might have reminded you of the days when your grandparents narrated stories of the gods and demons and taught you about good and evil. The collection revolved around the ancient story of Samudra Manthan, in which all the deities and demons came together to churn the Kshirsagar which would help them procure amrit (divine nectar) and other ethereal gems.

Hosted by Archer Art Gallery in Ahmedabad from August 5-7, Ambalal’s exhibition was conceptually rich and vibrant but humble in its storytelling. The exhibition had 3 wall-sized canvas paintings, 17 sketches depicting his rough work, a centrepiece representing Kurma, the tortoise-like avatar of Lord Vishnu holding Mount Mandara on his shell, and numerous small sculptures made of clay and papier-mâché, all of which depict certain facets of the mythical story.

Ambalal teaches, through his creations, about how—through balance and cooperation between good and evil—one can procure divine beauty. He says, “Only through the collaborative efforts between gods and demons was the majestic feat of churning the ocean made possible. Similarly, in this day and age, if two opposing elements work together and in harmony, only then can we procure the gems and amrit of this world.”

Talking about a painting of his, in which a goddess and a swan emerge from the waters, Ambalal explained, “What I am trying to show with this piece is the event when all the goddesses are set free and released from the ocean. Lakshmi [a symbol of prosperity] sprints forth but looks behind to see if Saraswati is following her. Saraswati [in the form of a swan] asks Lakshmi to slow down because, without Saraswati, Lakshmi will fade away. This represents that wealth or prosperity cannot sustain for long without wisdom. A proper balance between them is necessary.”

One rarely sees the rough sketches of most artists but these are often most revelatory of their thought processes as well as failed attempts. At this exhibition, Ambalaldisplays his rough sketches to show his audience the amount of work that goes into the creation of his works, and the different ideas that he brushes through before making a final piece. Looking at them, aspiring painter Shivani Patel remarks, “Usually painters do direct painting. To make these miniatures and take them to a larger scale is really unique. Seeing them inspires me to paint more.” 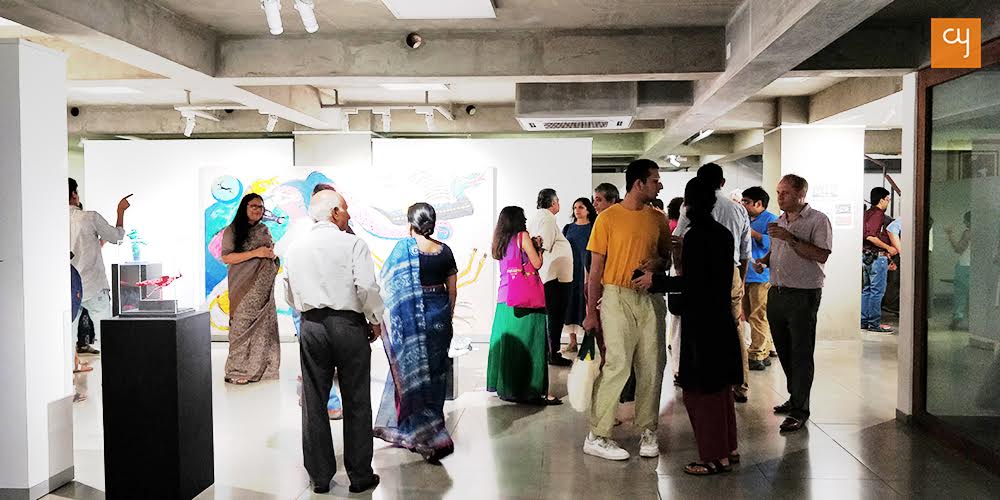 Like in Ambalal’s previous works, the Adventure compilation too has a joyous and childlike undertone beneath everything. At the same time, the works communicate deep and thought-provoking messages that show Ambalal to be not just an artist but also a prolific preacher.