Inaugurated by Nabibakhsh Mansoori, the exhibition “Artwithin” displays the two sisters’ unique approaches to representing nature in art, through photos and paintings. Drop by Amdavadni Gufa till August 25.

Sisters Shailaja and Shivani Patel have put up a mesmerising exhibition titled “Artwithin” at the Herwitz Art Gallery near Amdavad ni Gufa. Showcasing their individual interests and unique styles of representation, the exhibition has 17 canvas paintings by Shivani and 21 photographs printed on canvas, by Shailaja. Nabibakhsh Mansoori, one of the most famous and loved artists of Ahmedabad, inaugurated the show on Tuesday, August 20. The event was also graced by the presence of veteran artist Amit Ambalal.

Daughters of Rajendra Patel, a well-known Gujarati poet and short story writer, Shailaja and Shivani communicate different aspects of life through their works. Both have followed different themes and styles of representation for the show.

Shivani portrays glimpses of “Strange Moments” encountered in nature. A great admirer of nature, she says that she often engages in random conversations with its elements—especially with birds. These dialogues are well illustrated in her paintings, with every piece representing a bird and a human face. Sometimes the two motifs overlap each other, seeming to suggest that the human is looking through the eyes of a bird, to imagine how it sees the world.

While Shivani’s collection lends a fresh morning vibe reminiscent of waking up to the chirping of birds, Shailaja takes us to the skies through beautiful sceneries of the Himalayan ranges. Titled “Wind of Silence”, her collection contains beautiful photographs from a trip made to the Himalayas this monsoon season. Shailaja’s photographs capture the serenading experience of trekking through the mountains and encountering unexpected beauties along the way. Initially involved in painting, Shailaja went on to become deeply fascinated by photography for its ability to vividly capture moments. For her, paintings and photography co-exist and maintain an artistic balance.

When discussing the sisters’ art with Nabibakhsh Mansoori, he noted, “The artworks of both the sisters have a lyrical feel to them and reflect their love and admiration for nature.” He compared the “lyrical” tones seen in their visual works as being akin to those seen in literature. 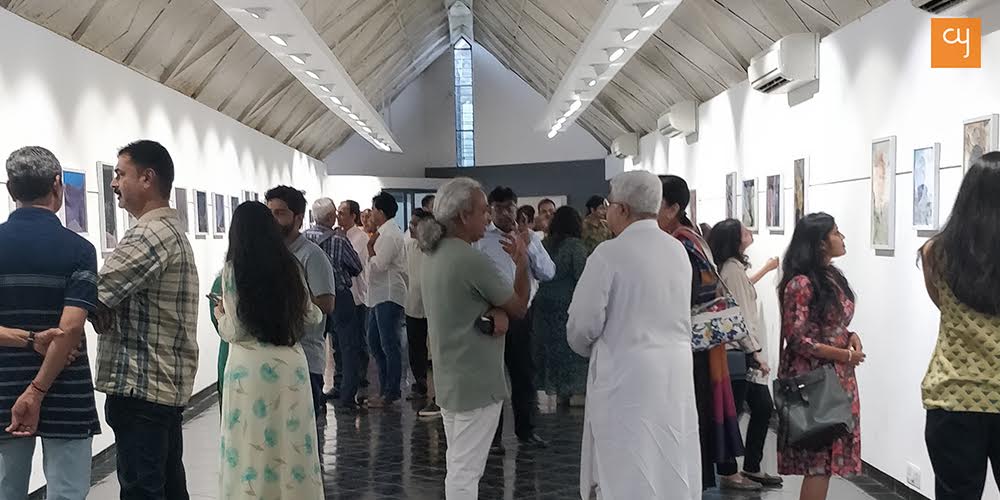 The exhibition remained open till Sunday, August 25, from 4-8 pm.