Meet the Ambalals as They Reminisce on Continuity and Change 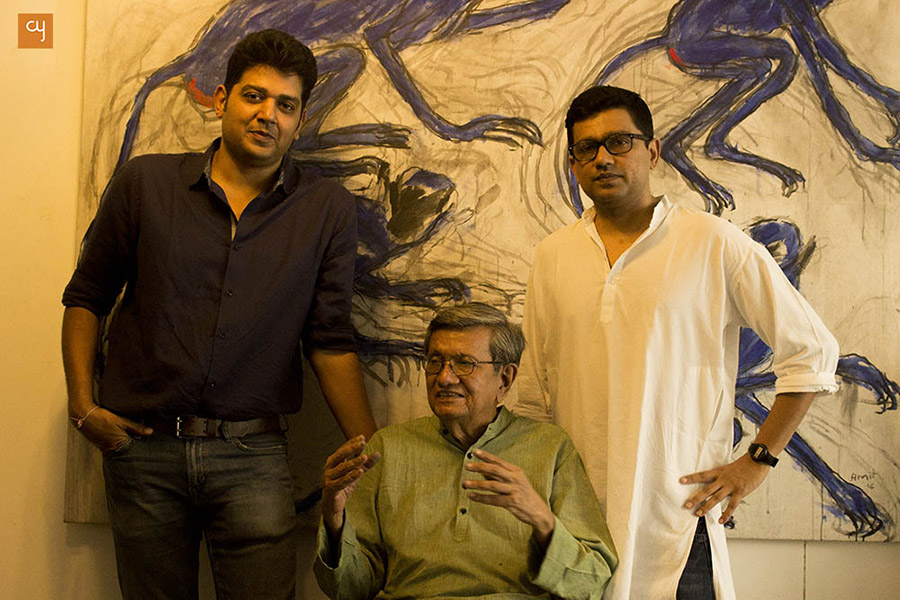 We rendezvous with one of the foremost creative families in the city to find out what inspires a father and his sons to pursue their distinctive art and design.

Mr Amit Ambalal, the patriarch of the renowned Ambalal family, is one of the country’s most well-respected artists, and his two sons Anand and Anuj are carving a niche for themselves in furniture design today. One fine Sunday morning, we found ourselves at Sumeru in Navrangpura, the haven where the Ambalals live and work. A green oasis in the heart of the city, Sumeru is a delight to visit, with monkeys and peacocks roaming at will.

With their home and studios all in the same space, Sumeru is no less than an art gallery, housing an eclectic mix of contemporary and historic art. A scholar of the Nathdwara Pichwais, Mr Ambalal dreamt of being able to view his collection at leisure, rather than having it rolled up somewhere in a storage room. For this purpose, the “Kamal Chowk” was created, in a rehabbed haveli. While his sons joked that putting this together took 5 years off of their life, he mused that it added many more to his! 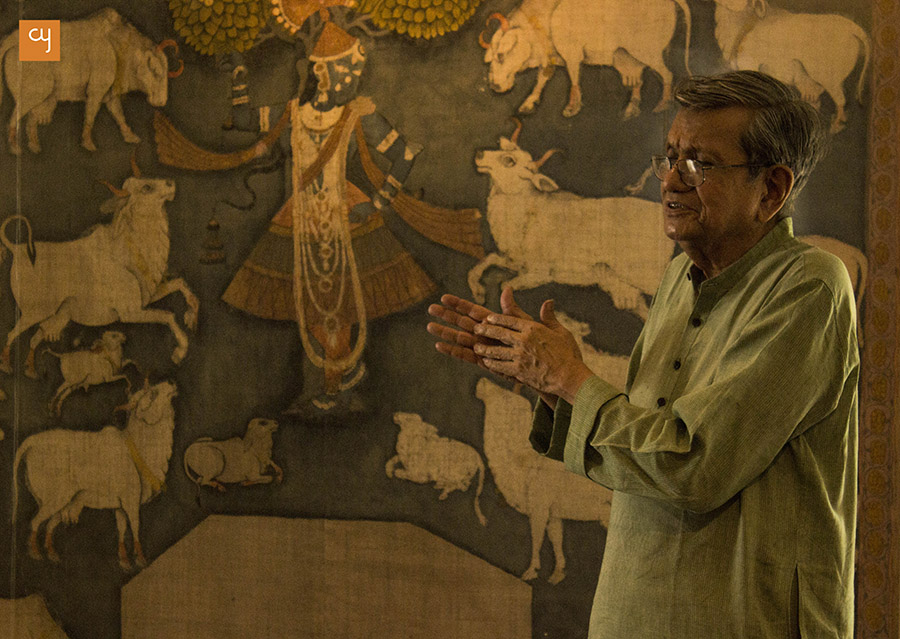 Pointing to an exquisite pichwai in the living room, his first acquisition, Mr Ambalal recounted how his father had rebuked him when he saw it, for “wasting” Rs. 150 on a “rag”. Today, this collection has expanded to such exquisite proportions that it’s even been exhibited at the Art Institute of Chicago.

Inspired by his mother, who was an artist, Mr Ambalal’s journey into art started when he was very young. He enthusiastically showed us a bust of his father that had been sculpted by her. Though he worked in business, as was expected of him, his heart resided in art. A self-taught ‘Sunday painter’, he shifted full time to art in 1979. Being of the belief that whatever he does should be light and fun, Mr Ambalal finds ‘high art’ boring. About his work, he said, “Let it be low art, as long as it is enjoyable and fun.” This organic approach makes his work a little different from others and defines his identity. 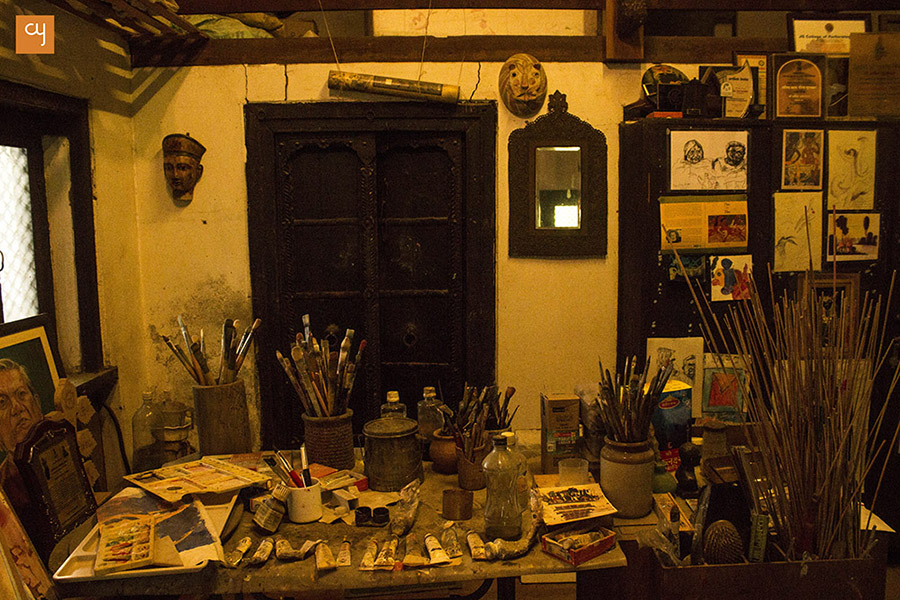 When Mr Ambalal switched to art, he was labelled as the black sheep of the family, because he had sold the family mill. Despite this, his father allowed him to pursue his dreams, though he would have been happier if his son had continued in the industry. Ironically enough, Mr Ambalal had happened to sell the mill shortly before the downfall of textile mills in the county began. He was soon assailed, therefore, by questions about his prophetic calculations. He joked that the only calculation had been that “God favours the fool!” 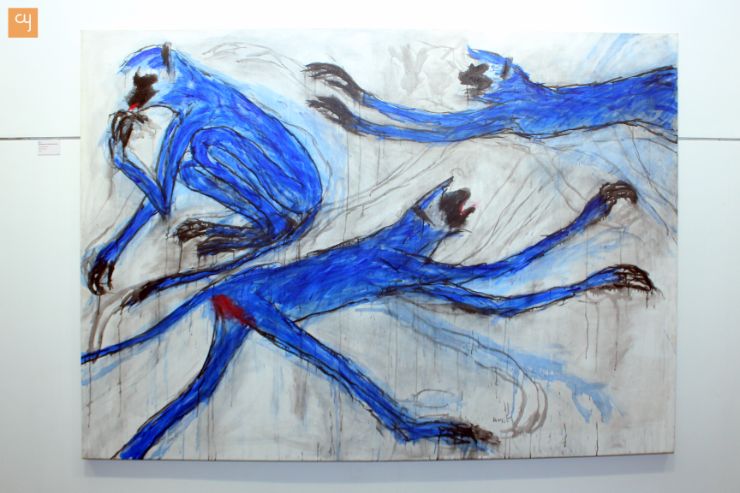 Mr Ambalal’s works emerge from “the life around him, and from within. Bronze, oil on canvas, pastels, papier mache” and any other material which may attract him, are all explored alike. He believes that a “change in medium also brings new dimensions” to his imagery.

Mr Ambalal’s beloved collection of Pichwais lie next to works done by his contemporaries Manjeet Bawa, Anjolie Ela Menon, M.F. Hussain and S.H. Raza. Pointing to what may be one of Hussain’s last works, drawn for him when he invited him to Dubai during his last days, he reminisced about his contemporaries, Raza and Hussain. They “had a certain charisma, and were conscious of making people aware of art through different ways. Such ambassadors of art are lacking in the present context”, he mused. 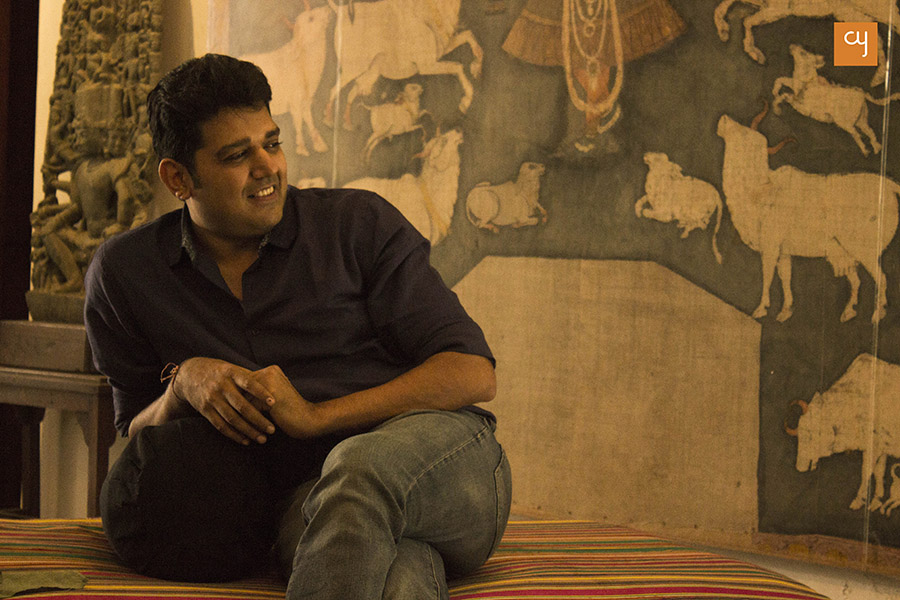 Anand and Anuj followed a slightly different path from their father. Good in their studies and unsure of what excited them, they pursued a conventional path towards higher studies. Anuj got an MSc in Investment and Finance and worked in investment banking. Finding it superficial, however, he realised it gave him no joy. His search for satisfaction and happiness eventually led him towards furniture design. Anand, as well, pursued an MBA and started an export business. But design and aesthetics soon attracted him, too. Starting off by exporting high-end furniture components, the brothers soon ventured into design. 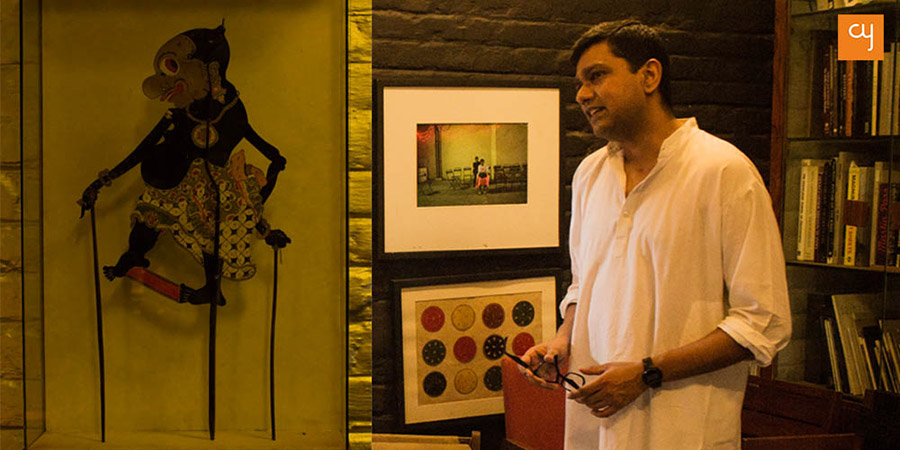 Apparently, their father wasn’t very keen on them pursuing design. “He was distinctly displeased”, said Anuj, and he tried to make his sons “see sense”. Mr Ambalal doesn’t recall things in a similar light, however!

Having not had formal training, the brothers’ works turned out to be quite distinct from typical furniture. They deployed unconventional forms, treatments and structures. Though initially, their products lacked comfort, with experimentation and effort, samples comprising a few pieces built up into an entire range of furniture. Feedback from friends led to orders for their designs. And slowly, they started expanding. Ultimately, they stopped exporting furniture components altogether and devoted their entire time to designing.

Like their father, the brothers want their working process to be fun. Strong believers in expressing their own selves through form, the brothers are not so focused on trying to stand out through their work. They say, “Our motivational forces are different and we don’t work with a very commercial bent of mind. We believe our work should give us pleasure at the end of the day.” 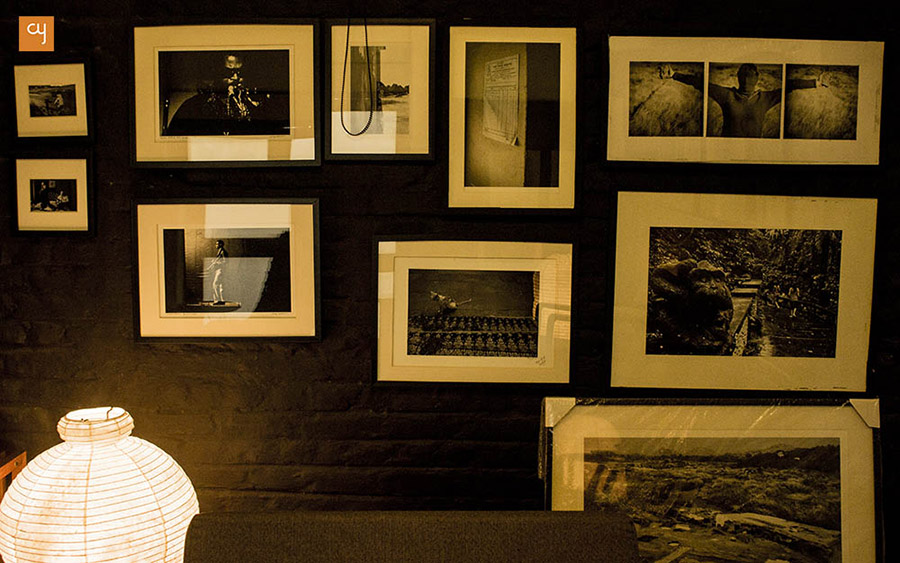 Anuj and Anand also experiment a great deal with new materials, particularly with concrete and wood. And they often work extensively with reclaimed materials for their designs, having done so while designing their own studio itself. For this, the materials inspired their design, rather than vice versa. Dimensions of a glass recycled from a travelling exhibition determined the dimensions of their studio walls. The brother’s studio, like their furniture, reflects a very contemporary aesthetic.

Ongoing projects and a possible collaboration

Having never worked on landscapes before, Mr Ambalal is currently exploring ways to channelise his thoughts through them. Even though landscape art is apparently considered a “lesser art form”, he’s been desperately trying to reinvent it over the past 6 months.

Anand and Anuj, in the meanwhile, are planning on embarking onto the online marketplace soon. They feel this is a bold move. Upcoming products will have to be designed specifically so as to be packed and shipped easily. The brothers are also exploring how to integrate Japanese paper lamp techniques into certain Indian lamp forms. 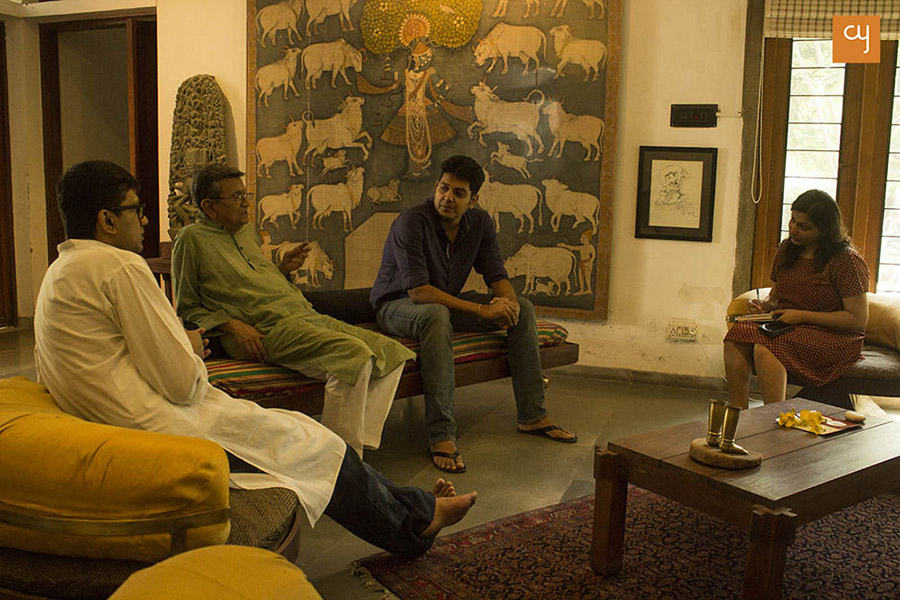 How does the family work in such close proximity to each other? “We keep going to and fro between each other’s studios and seek each other’s advise,” exchanging feedback and “seeking out each other’s opinions”. After several discussions, at least one person has to be absolutely convinced before going ahead with an idea.

Pointing out the common factor in all their works, Mr Ambalal refers to a conversation he once had with Hussain about what goes into creating art. He said, “Geometry and rhythm are central for any art.” And this is the common factor that the three Ambalals share in their works.

So are any collaborations between the father and sons in the pipeline? Yes, said Anuj, they do want to combine their matka shaped lamps with one of their father’s works of a crow, to symbolise the tale of The Thirsty Crow.

Ahmedabad: A city for experimentation

When Mr Ambalal started the Contemporary Art Gallery in 1974 in Ahmedabad, he was told that there would be no exhibitions to hold there. But gradually, the place attracted so many exhibitions that, on some occasions, multiple exhibitions had to be held on the same day.

The Ambalals believe that the art scene in Ahmedabad is vibrant in and of itself, minus the investment factor, which is a more prominent factor in Bombay and Delhi. Here, “it is comparable to what is happening abroad”, with thriving spaces for experimentation.

Anand and Anuj pointed out that Ahmedabad, with its history of design, “is the place to be in for design”. While clients in Bombay and Delhi often have fixed ideas about what design should be, those in Ahmedabad are open to experimentation and willing to take risks. The brothers believe that they’ve been able to build their own identity as creators of “experimental furniture” because of how the city itself is. Mr Ambalal added that, in Ahmedabad, all the top architects of the country and the world were allowed freedom to design as they wished, which is not something one sees in Bombay or Delhi.

There is a word of caution though. As real estate booms, it reduces room for the kind of experimentation that residential projects allow for. A lot of money is at stake in commercial projects and repercussions of this are felt in a sector so closely allied to that of home design.

The camaraderie between this trio of creators was a sheer joy to behold. We look forward to seeing many possible collaborations between the three Ambalals in the years to come.