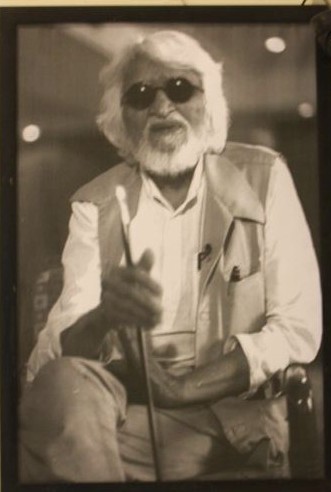 Who knew that a boy from Indore, will paint the History of Indian Art like Colossus.

It was 1937 when M.F. Husain (Maqbool Fida Husain) came to Bombay for the first time. Dazzled, by the urban phenomenon. Bombay was possessed by modernism, institutions, museums, galleries and academics – it was there then when it all started.

Though, it wasn’t a smooth START. Husain faced insurmountable economic and social challenges.

To help himself, he started as a painter of cinema hoardings. Balancing on bamboo scaffoldings, he produced these billboards without any grids and created giant human forms. This gave him and understanding the images of mass culture – inclining him towards pop art. With this, Husain was exploring the city trying to find an entry to India’s elite colonial art world.

And things went to next level in 1947 when he won an award at the prestigious annual exhibition of the Bombay Art Society. This was the sign of acceptance by the art fraternity.

He soon found himself in the orbit of Bombay’s Avant-garde circle. It was there then, Souza spotted him as a talent. Souza, a brilliant young artist himself started introducing Husain to the inner world of Bombay’s artistic life and to the European émigrés.

During this time, to ward off financial stress, Husain also began work as a designer for children furniture.

This was also the time of partition and it was raging unabated throughout the nation. Like most, Husain’s aesthetic arena too was affected by it.

His colleagues of Progressive Artist’s Group were departing for Europe- mainly Paris, while Husain chose to not leave the country.

During this time he was gaining more support of European émigrés and patrons, who were trying to promote Indian Art internationally.

In 1950, he had his first solo exhibition at Bombay Art Society Hall. He exhibited life-size paintings themed around “Man” and “1947”, with the context of fragmentation of values, history, culture and society – gained him powerful status in art circles.

He treated large canvases like billboard hoardings, painting it with a narrative format and visual power of any persuasive advertisement.

This was an important phase in M.F Husain’s artistic oeuvre– it was during this time he fused Cubism and German expressionistic language in his artworks.

In 1952 – Husain went to china on scholarship by Indian Government. He was inspired by Chinese philosophies and techniques of paintings. This visit will later help him to produce his iconic work – “Horses”.

After that visit to China, M.F Hussain created powerful and distinct series of his lifetime – “Between the spider and the lamp”, in 1956. Dramatically arranged three female figures possess choreographical quality illustrating castism.

By 1970, Hussain was national figure already but was tackling much more controversial subjects in his art.

During this period he created his famous satirical “Durga” series – tribute to Indira Gandhi. This political statement made headlines nationally – and this became the first event when an art expression made a political comment in India.

A lot of his work attracted controversy in the times to come. Husain took over a self-imposed exile in 2006 and never returned to India till he lived. He spent the most time in Doha and summers in London.

He continued painting during all these years. On June 9, 2011, at the age of 95 Husain passed away while in London.

On his centenary year, Anil Relia, an art collector and entrepreneur and a close associate of Husain along with art connoisseur Umang Hutheesing have put up a show of 19 huge works of Husain in Ahmedabad. Some of the works are being exhibited for the first time in India.