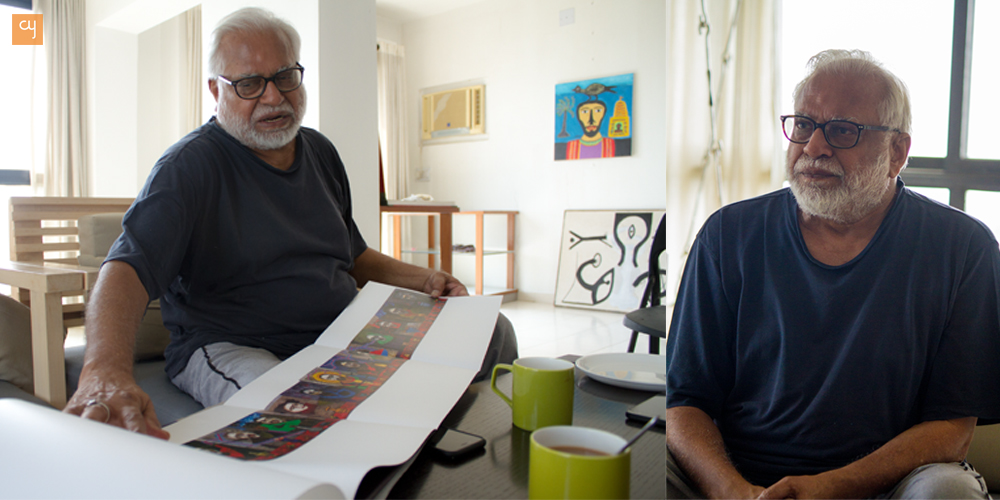 Padma Shri artist Manu Parekh is the first Gujarati artist to have a retrospective at the prestigious National Gallery of Modern Art, Delhi. CreativeYatra.com engages in a warm conversation with the master artist.

Not every day does one have the opportunity to start off with inspiration. Rather, “inspirations don’t occur consciously,” in the words of Manu Parekh. However, I self-invited myself to the Padma Shri winning artist’s river-facing apartment-cum-studio in Ahmedabad for a hot cup of morning tea, on such a day. Over our tête-à-tête about his picturesque art journey, we discussed the artist’s most recent exhibition – a retrospective of 60 years – on display at the National Gallery of Modern Art, Delhi. Displaying 140 of the artist’s most celebrated works, right from the 1960s to now, the exhibition ended on September 24, 2017.

Trained at the prestigious JJ School of Art, Mumbai, in 1962, Parekh has not only been trained in visual forms of creativity but has also imbibed the art of theatre from the National School of Drama, Delhi. He even worked as an actor and stage designer in his early days. His life purpose was redefined, however, during the 25 years that he spent as a design consultant at the Handicrafts and Handlooms Export Corporation of India, alongside cultural activist Pupul Jayakar. While working at the grassroots level with artisans, he was greatly influenced by their folk art. On one occasion, he helped unemployed rural communities to generate revenue through their inherited artistic skills. Parekh has contributed immensely in making the Madhubani art popular across Europe. 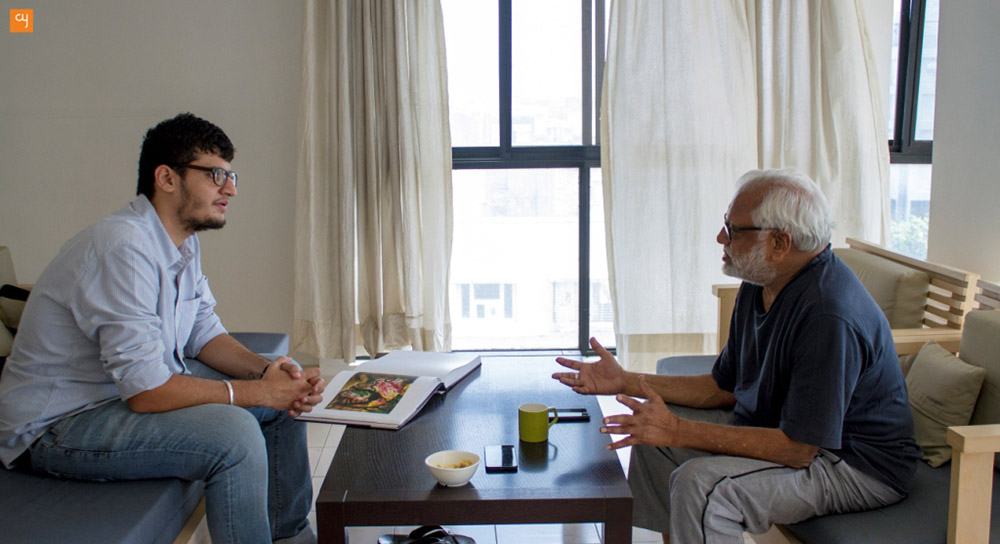 At the exhibition, one can see the signature styled flower vase paintings alongside Parekh’s famous Varanasi themed paintings.“My paintings of Varanasi connected my spirituality with the conscious self,” said Parekh. However, the Lalit Kala Akademi Award winner believes that “inspirations don’t occur consciously.” This was aptly explained by the expressionist as we browsed through a recently inaugurated coffee-table book showcasing 250 of his original creations. “I was in Africa once and was incredibly moved by a kill, wherein two cheetahs hunted a deer. It explained to me the theory ‘survival of the fittest’, and eventually prompted me to draw the heads of animals in the form of graffiti. There is a constant process in our mind that never stops visualising through experiences, and I guess that is where we build inspirations for ourselves.” 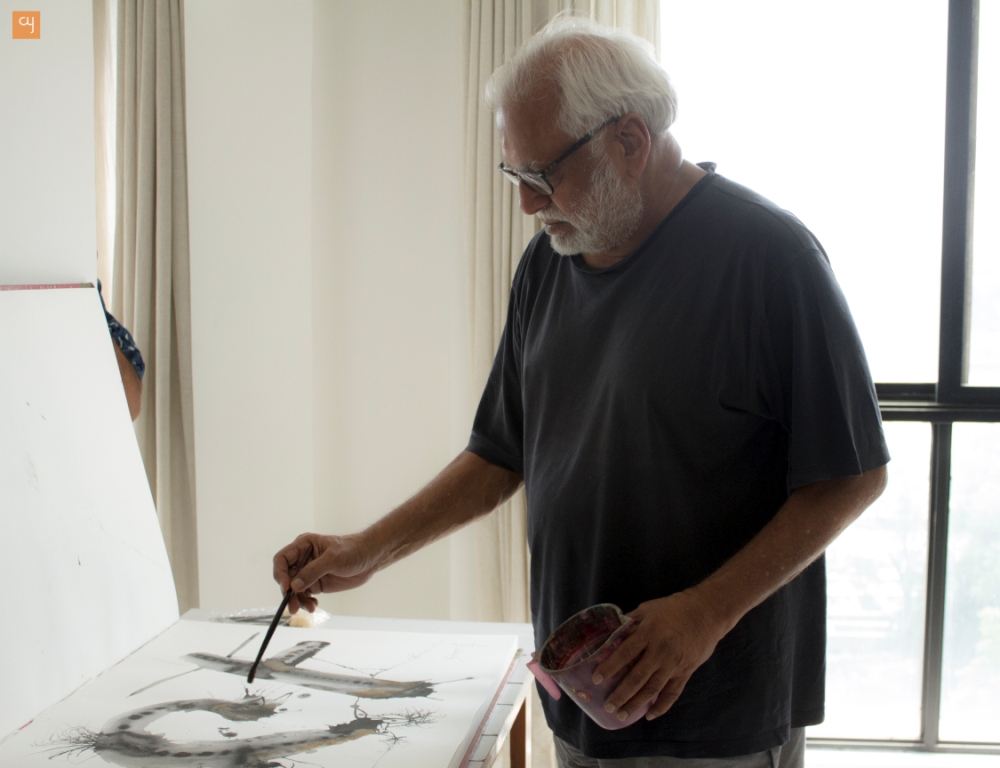 While the octogenarian artist followed the trends of the Bombay Progressive Artists’ Group during his academic years, he later shifted to Kolkata to empathise with the profound philosophies of the Bengal School of Art. Framing his understanding of both the Brotherhoods, he beautifully said to me, “I love the high energy artworks of FN Souza, as profoundly as I love the visual poems of Rabindranath Tagore. One teaches me to always experiment with conventional methods, and the other reminds me incessantly to stay true to the roots that define us in the first place.” When asked about the trajectory his own artworks have taken, he observed,“My creations of the flower vase may remind of Vincent Van Gogh’s aesthetics. My compilation of paintings of heads juxtaposed together like in Leonardo da Vinci’s The Last Supper, may appear to be a token of gratitude towards Pablo Picasso’s renditions of head paintings. But every time I paint a modern art form, my effort consistently lies in Indianising the modern art genre of painting.”

Regarding his preferences among mediums and themes, the modest creator simply replied, “I believe in freedom of expression and independence of language. Let us not be bound by choices and favourites.” Parekh expects that the show, especially The Last Supper adaptation, will help him become once again inclined towards figurative drawing, over and above abstract and Indian Modern Art. 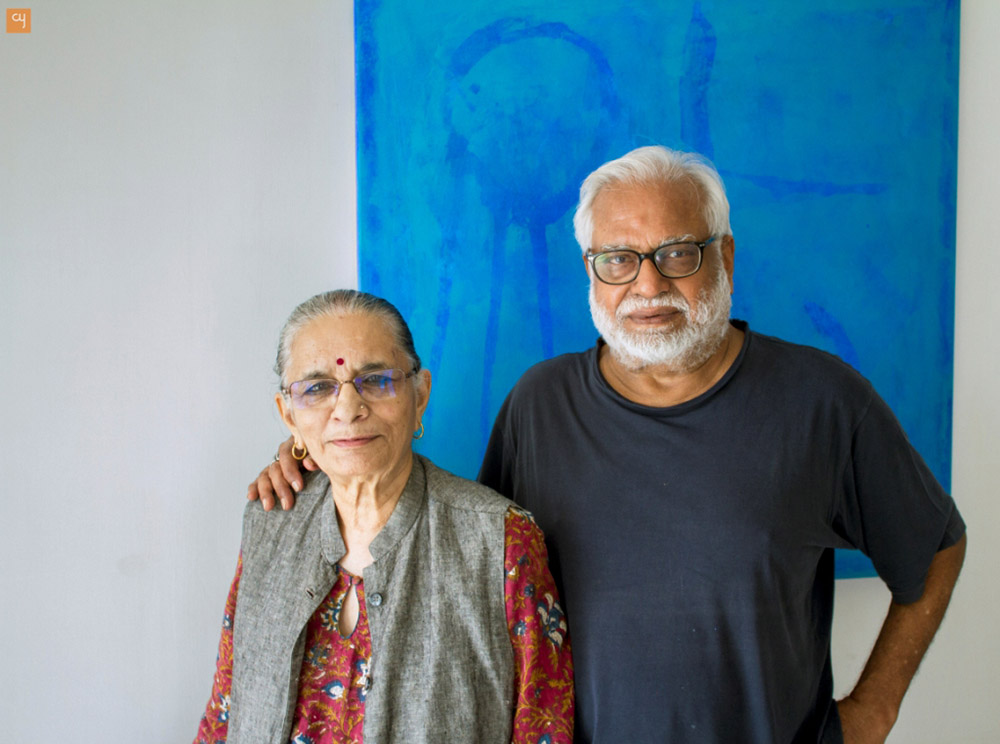 It is the first time that an artist from Gujarat has been featured at the National Gallery of Modern Art. Simultaneously, Parekh’s wife Madhvi Parekh, who is a self-trained independent artist, has also been showcasing at prestigious shows across the globe. Both the painters are pride of Gujarat and India, and this achievement has provided a big leap for the art fraternity of Gujarat.