The Last of the Legends: Farewell, Raza Saab! 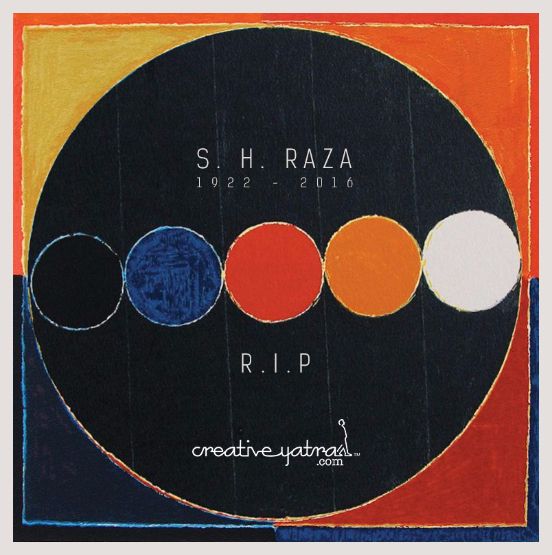 In the year 1950, a 28-year-old man sailed across the Indian Ocean “to see the works of Cezanne” in Paris. As destiny would have it, Paris for him was ‘love at first sight’. He went to the opera, watched the famous ballet companies perform, read Albert Camus and Jean-Paul Sartre and fell in love with the poetry of Rilke. He was to return back to India as an old man, frailer by time but timeless in terms of his work, to be loved and remembered as the last of the Moderns – Padma Shri Syed Haider Raza.

Born in the small village of Babaria, Madhya Pradesh, Raza Saab’s father was a forest officer during the pre-independence era. It seemed like quite a journey for this man who once as a little boy was introduced to the Bindu by his schoolteacher, Nandlal Jharia, who drew a point on the wall for an eight-year-old Raza to concentrate on and the rest they say is history. Raza studied at an Art school located in Nagpur, and then in Mumbai (1943) gained a bursary to attain a degree from Sir JJ School of Art. He was profoundly influenced by this shift to this first big city in his formative years. Here he encountered Souza and other artists and then assembled all to form the Progressive Artists’ Group. “Some were older, some like (Akbar) Padamsee and Krishen Khanna were younger, but it was a healthy climate of critique,” said Raza in one of his interviews.

It was his meeting with Cartier-Bresson in 1948 in Srinagar, which became a turning point in his life. He suddenly turned passionate over the idea of visiting Paris “to see the works of Cézanne and van Gogh in the museums.” Cartier-Bresson remarked “You are a talented painter. But your work needs one element—that is construction.” This observation left young Raza deeply impacted and he began to explore form constructions in Geometry. The talk about travelling to Paris wasn’t a passing one. He soon engaged in serious pursuit. He learnt the French language at the Alliance Francaise. Eventually, he was rewarded a three-year scholarship to study at the Ecole des Beaux-Arts College by the French government. He went on to become the foremost non-French artist to get honoured with the esteemed Prix de la Critique during 1956, the award put Raza onto the global map.

The now successful Raza is renowned for his thick impasto strokes in his landscape art; Raza in one of his more recent interviews recollected having questioned his own self, “Where is the India in your work?” In search of an answer to this question led him to actively explore in his works the idea of Indian heritage. Here is where the Bindu recurred, as he researched on the Mandala as a rounded figure signifying the universe. His visits to India became an annual affair and the Bhagwad Gita became a frequent read. He refered to the concept of Swadharm, also stating “The idea of concentrating on one thing at one time. You need to focus your energies. That’s what the bindu is about.”

Syed Haider Raza, passed away this Saturday at the age of 94 and most remember him as a man who was still very much at work. His relationship with his palette being both – romantic and violent – just like when he was twenty. His immaculate and persistent drive stayed with him until the very end, as did his insistence to paint. His unhinged brushstrokes, wavy by age yet characterized by faith and fervor still upheld the elements of his painterly imagination.

“I want to tell young painters that they should not be in a hurry to succeed” he said in one of his interviews early this year. “The Gita says, ‘Ritu gan se prabhav se (By the influence of the right climate)’… I am no intellectual but I have achieved what I have by working in one focused direction – the Bindu and its infinite possibilities.”

In many ways the last bastion of the legendary Progressive Artists Group, for all his talk of persistence, Raza never believed in the proposal of ‘perfection,’ because he who is perfect, is also finished he said. “Cézanne kept painting the Sainte-Victoire till he reached it. We’re all reaching the mountain,” he said. What words to leave us with to ponder upon Raza Saab. Rest in Peace.