Roots and Pathways: Yes, It Is all Inside! 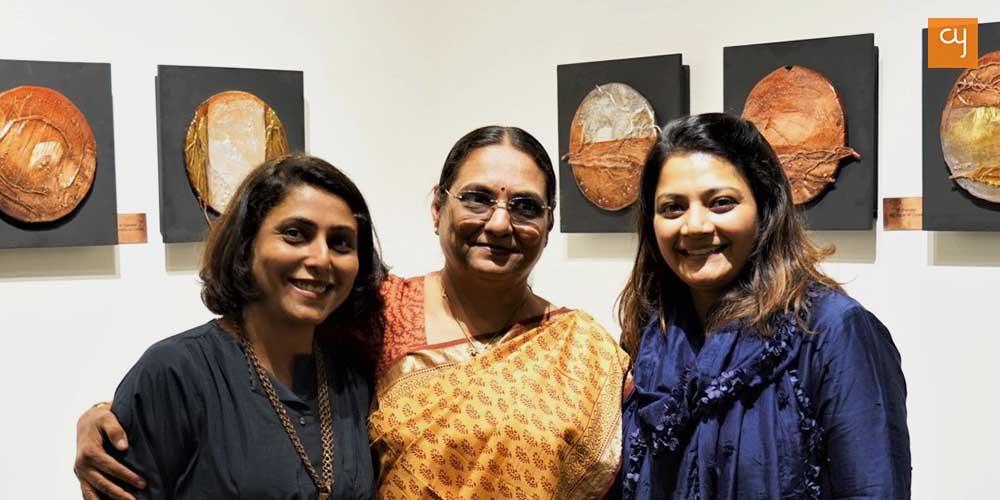 It’s invariably the human life at the core of every artistic endeavour – either in its raw existentialist form whereby the artist deals with its enigma and tries to find answers, or it is about the evolved forms in the sociological and civilizational context when it tends to impinge on human living in and as community groups or nation-states. The show Roots and Pathways by Ami Patel of Mumbai that opened last Friday at 079 Stories conforms to the first order and is described by the curator Nayana Soparkar herself as “(the) quest to understand and unravel the mysteries of life.” 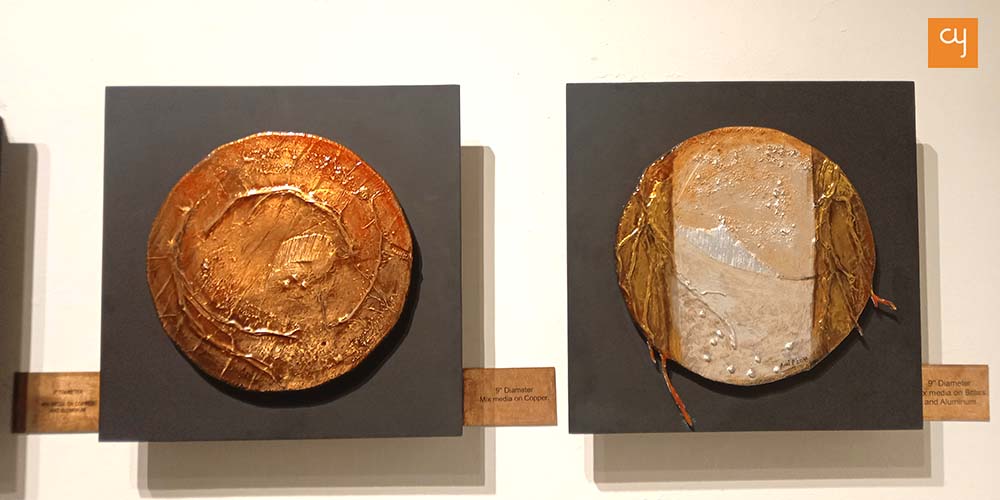 The unending and unfathomable mysteries of human life have incessantly engaged the philosophers from times immemorial, more so in India where we have, with our mystics and ascetics, considered ourselves as spiritually evolved and found wisdom just under the banyan tree while the third eye of divine perception opened the vistas to enlightenment. And yet, the questions survive eternally in this eternal life and raise their heads to confront some more individuals who feel the quest to be pushing r pulling them to search and explore the realm in their own way; and for their own being, notwithstanding the accumulated reserves of thought which are there to read, retain, reflect and in turn recreate some more thought for the generations to come!

So obviously, artists like Ami Patel consciously tread on that charted-uncharted course to solicit life’s myriad meanings in their own way. A look around the show and on the artist’s self-description statement as also curator’s introduction indicates Ami, like many others, chooses to explore life through nature with its five elements that reside in the human form, such a vital part of the former; and also through many layers of nature’s wilderness that also sits solemnly in the sub-conscious, conscious and superconscious layers of the human mind. All this to discover the ‘roots inside’ and the deep resonance the Nature can create in a living individual. As if to corroborate, a visitor from California wrote Ami’s exhibition (suddenly) taught him that his own roots sat inside him! 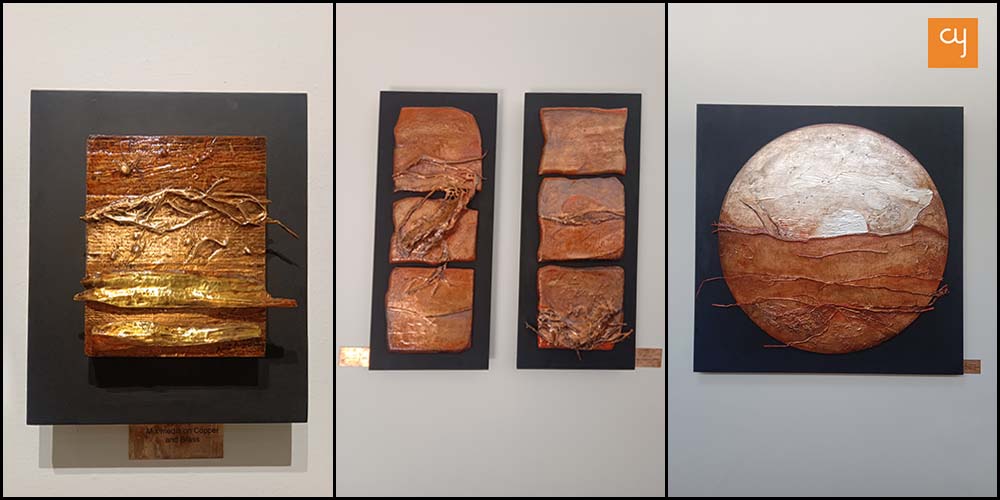 Trained at JJ School of Arts in Mumbai and practising art with her art enterprise Kreative Artlab from the Maximum City, Ami’s repertoire on show comprises of some three dozen works. In some ways in line with her current specialization in metal cladding and functional art for interiors, it is an exotic set of creations that leaves a dominant feel of the metal and copper-rust colour, even as it is the mixed media that have been eventually used to produce a lustrous finish or eye-catching patterns on these works on a metal or wood-bark surface. The creative process is a mix of sculpting, layering and producing the sheen of luminous colours that seem to create now subtle and now bold patterns of roots, branches, flying or sitting birds, tree-trunks and reflections of the sunlight, or even a sun rising or setting on the horizon! While you closely observe and realize that some of the above patterns are coming alive, it becomes a walk through the wilderness in the company of some whispering music, coming as if from the meadows nearby. 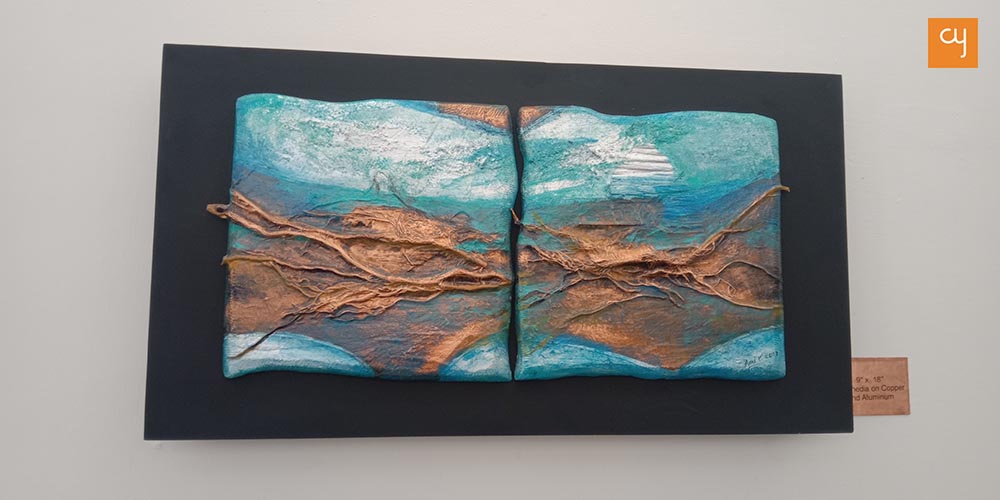 A roof-high hanging installation is the centre of attraction – the piece de resistance – of the exhibition which greets you as you enter the gallery space. Showcasing inter-twined tresses (which eventually end up as inverted roots in a real setting) of a what has to be a banyan tree for its legendary significance in physical as well as spiritual awakening in human life; withered leaves and soft-loose dust seemingly thrown by red-ants, all of it to simulate the cycle of the human birth-death-rebirth, this work uses treated jute thread, lal mitti and metal for its elements. 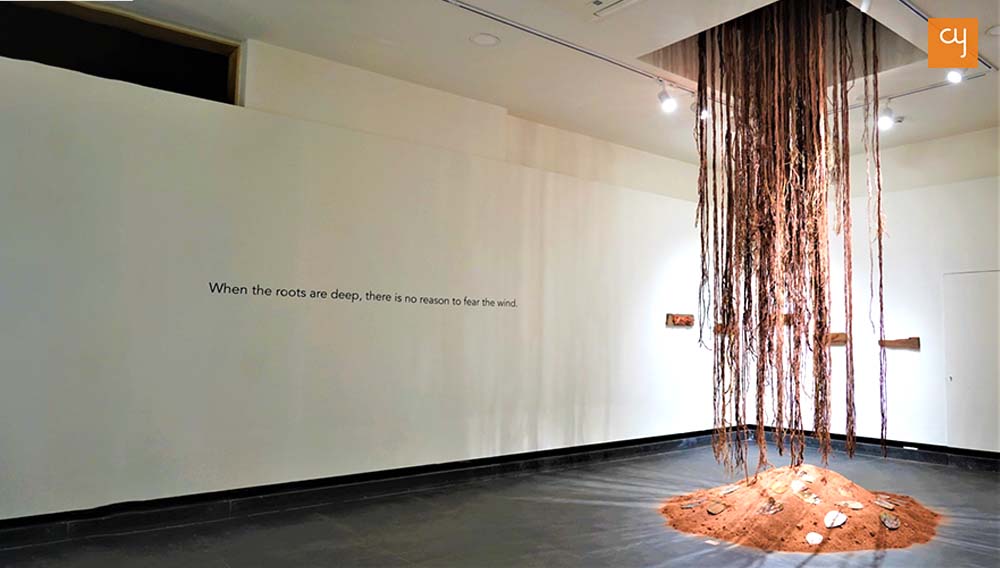 Coming from the stable of one who has shown around in countless group shows and a good number of solo shows, and one who is much-acclaimed with awards and citations, Ami’s works are uniquely different for the kind of materials, surfaces, media and the finish that they come out with. And while the works dwell on nature a great deal in keeping with the forte of their creator, some of them do pass as nice-looking decorative wall-sets ready as diptychs and triptychs for creating or enhancing a nice interior! Coming in shapes of rounds, squares, rectangles, logs and oblique’s in all convenient and extra sizes, they are priced in a range of Rs.30,000 to a few lakhs.

The show is on till January 13, i.e. until a day before Makar Sankranti.