Artists continue the Celebration of Womanhood; and We are Liking it! 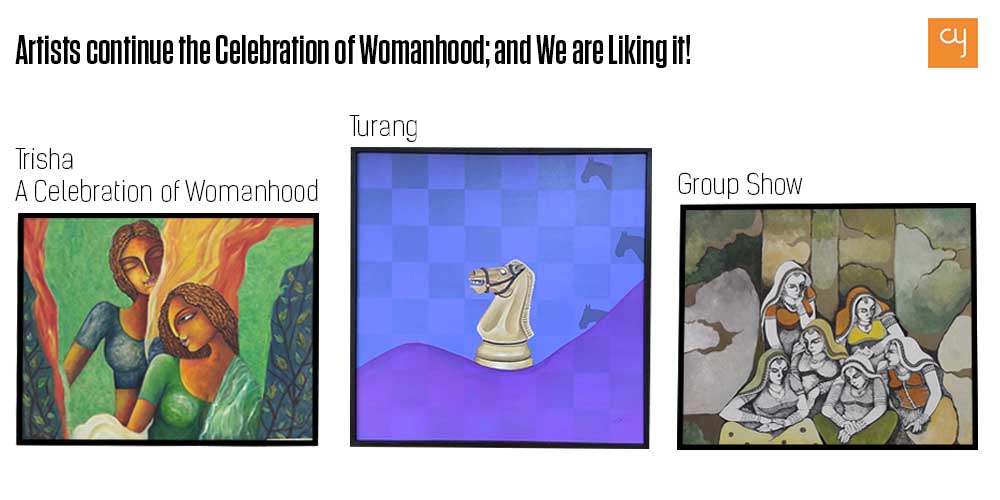 It is a very interesting coincidence that one spot in the local art circuit right now. It’s the third consecutive week and a third show that brings a celebration of womanhood to the forefront of themes chosen by the artists. After we saw this strain of ‘celebration’ of the feminine and the incumbent pursuit of leisure in very many ways in recent shows, Of Goddesses and Women by Shweta Garg and Kala Sangrah, a group show by MSU alumni, the idea of celebrating the other half marches on in the just started show Trisha, as well; as if the flame is being handed down by one like-minded artist to another!

A group show of women artists visiting from Goa, Pune and Ratnagiri, Trisha literally meaning ‘thirst’ and metaphorically meaning ‘desire or quest for creativity,’ was started off on Thursday at Hutheesing Centre by Ranna Parikh and Bhadri Suthar Sonpal. These two accomplished Architect-designers of the city also participated soon after in a panel discussion on creativity and artistic calling in women’s lives with the visiting trio of artists. Captioned Art Beyond Canvas – Women In Charge and moderated by journo-turned-freelance-writer, art buff and talk-host Anurita Rathore Jadeja, this discussion offered an exciting start for a show of paintings by artists groomed in a milieu essentially Indian in the same way and yet a little different going by the rich diversity that we have every few hundred kilometres in our country! The idea of art was discussed by the panel in the wider context of the pursuit of aesthetics in interiors and design, as also on the canvas by these women practitioners.

The show features about five dozen works by Madhuri Gaywal, Dr Swapna Mohite and Alpana Lele; the latter also happens to be the group show curator-coordinator for Trisha, as also for a host of other shows which she has organized for fellow artists at a number of places – including US – when she is not creating her own series of women-folk or folk women in rural settings. This forte to paint women is something inspired by her initial life in Rajasthan and Gujarat. Lele creates glimpses of everyday life in her very relatable figurative paintings. In the current show, she has Chalo Saheli, Ma-beti, Ghar Sansar, etc, which enliven the unending daily chores like fetching the water and handling the kitchen.

Other works like Fursat, Gapshap, A couple and Sukesha happen to be shringarik or beautifully romantic in their ethos. Lele’s feminine forms are absolutely chiselled in their proportions and seem to speak with highly expressive faces. She is actually credited to create stunning monochromes, which is corroborated by one or two of her works on display in that category.

Swapnja Mohite’s repertoire on show indicates a certain fancy for sea, nature, seasons and environment; something that seems to go with her professional training as a marine biologist. Her landscapes, seascapes and cityscapes capture the interplay of waves, the sunset, the reflection of the city’s shimmering sky-scrapers in what is the comparatively still coastal waters and much more! She creates her studies in acrylic or resin or a mix of the two and ends up producing a very charming lustrous sheen to these works. From shifting colours of fall to the serenity of nature, there is plenty to be relished in her twenty-two works on a show!

A Marathi poetess and a painter, Madhuri Gayawal is the third of the Trisha trio who calls her works as “figurative abstracts.” Twenty-three of her works on show abound in ‘two women’ and ‘three women’ kinds and so does the meditative and reflective composure of the subjects, which is both overt and covert. Gayawal’s women appear with a stylised depiction of foreheads, facial features and hair pleads in what are sombre colours to us, somehow at slight divergence to their description of happiness and joy.

At another group show featuring five artists in the adjoining Gallery in Amdavad ni Gufa which opened on Tuesday, it is Kishor Narkhadiwala who with his miniature style paintings mesmerizes the visitor. About ten of his vibrant works on imported paper, which are on display have been inspired from episodes of Kalidas’s great Sanskrit epics Raghuvamsa, Abhijnanasakuntalam, Meghaduta and Vikaramorvsiyam. 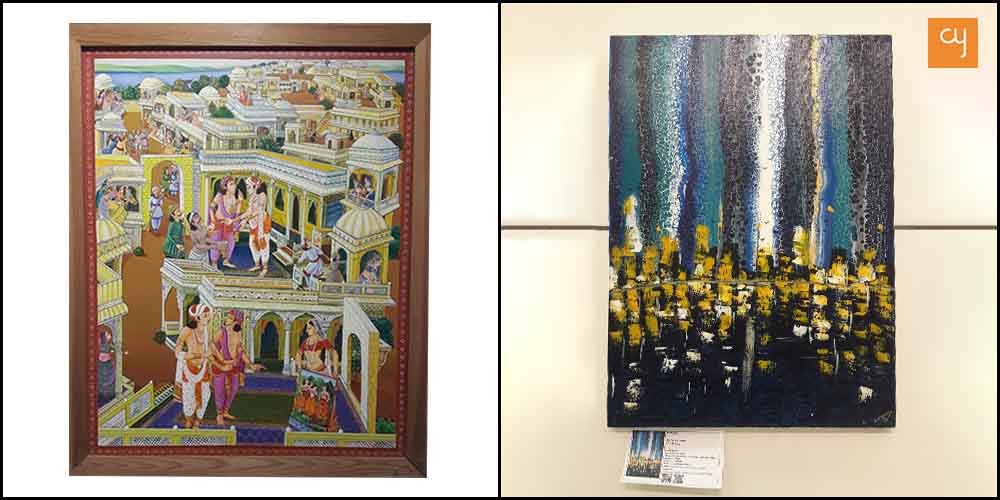 In keeping with the miniature style, these works are replete with intricate details of the settings but have been produced on sizes that defy the miniature format. Narkhadiwala’s command on the form is nothing less than excellent as he recreates the popular stories from these epic works that have remained fresh in public mind due to the oral tradition as also for some of them having been taken to both celluloid and the stage; besides of course the fine art of painting itself and repeatedly.

The works depict both men and women in finery of their times as also in ideal physical traits; sights of groups of women beholding a marriage procession from rooftops, a Hanuman being held captive or the fisherman being produced before Dushyant, the king who forgot Shakuntala are fascinating creations in the Indian tradition both in content and form; truly works worthy of savouring at a leisured pace! 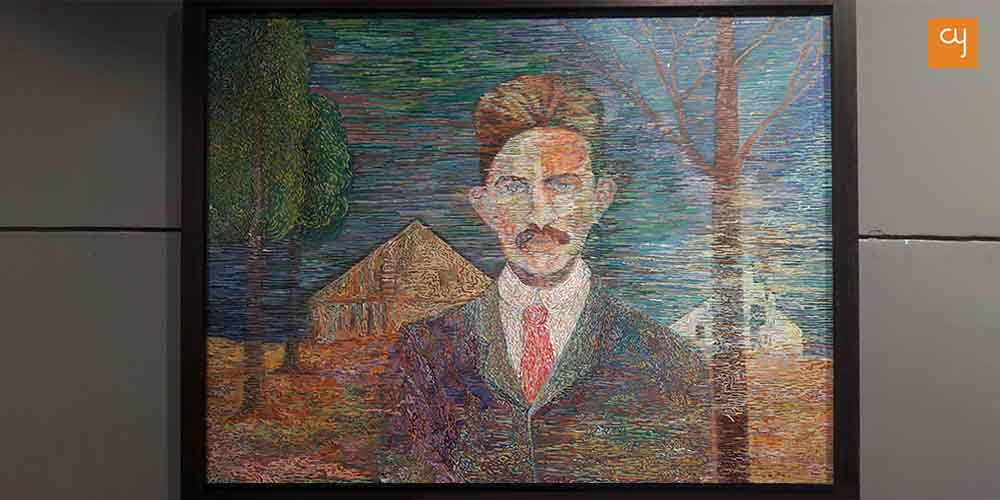 This show also features three of Manhar Kapadia’s works from his well-known Gandhi repertoire; Kapadia had also shown an exclusive 150-foot long single work on Gandhi’s 150th birthday this last October. The show also has watercolour works by Bhavesh Jhala; some outline drawings of ‘women in black’ and some layered works in white by Devang Vyas, who is essentially a sculptor; and then fire etching works by Kamal Rana. Jhala offers us a second r third tranche of some fascinating compositions about Ahmedabad city in these watercolours, in quick succession to the very well-received recent show on the same theme by Aarti Patel. 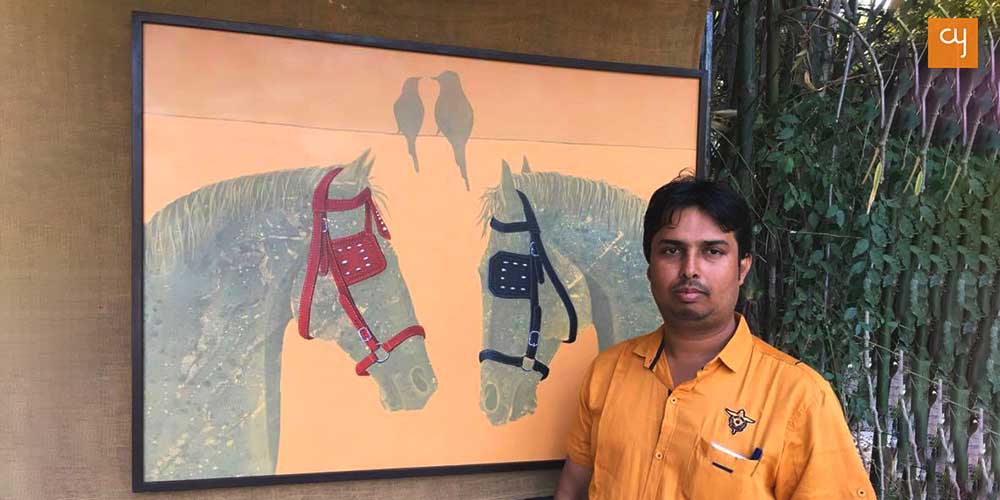 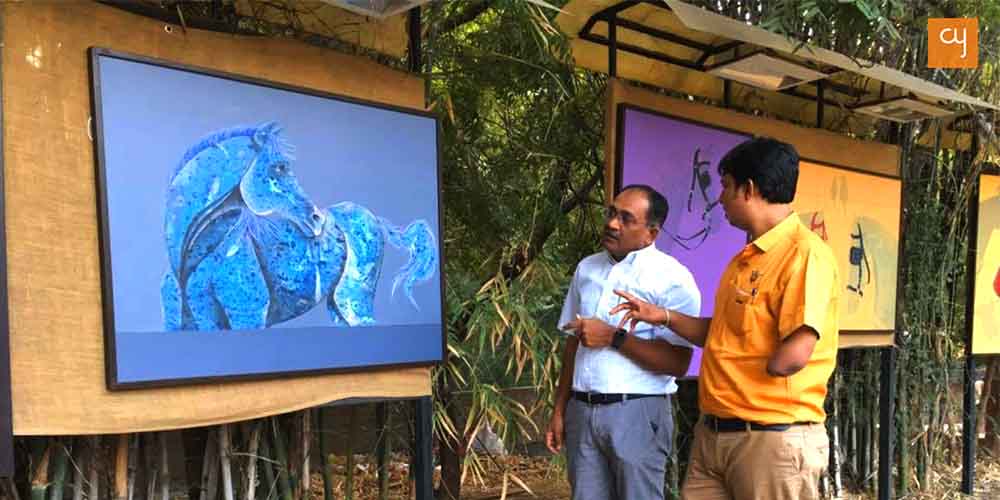 Both the shows at Hutheesing and Gufa are on till Sunday, December 15. Another show Turang on the theme of horses by Yogesh S Pawar is also on till Sunday at the Open Arena in Gufa campus.