Women are Goddesses in their own Right! 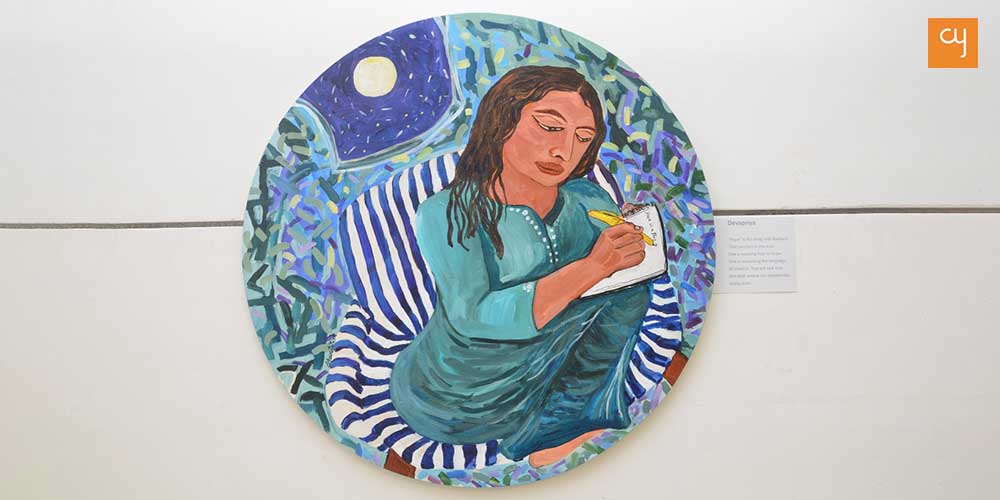 Women are Goddesses in their own right, so says our worldly experience! “A woman immersed in her own world, one with actions is no less than divine!” believes this feminist artist who presented the latest art show in town “Of Goddesses and Women,” on Thursday evening at the Hutheesing Art Centre in Ahmedabad. This compact show of paintings draws on and portrays this ‘divine side’ of the fair sex through a gentle, sensitive and a very simple humane interpretation of their daily lives on canvas by the very genteel of them all, Shweta Rao Garg, an artist who teaches literature as her mainstay at Dhirubhai Ambani Institute of Information & Communication Technology (DAIICT), Gandhinagar. 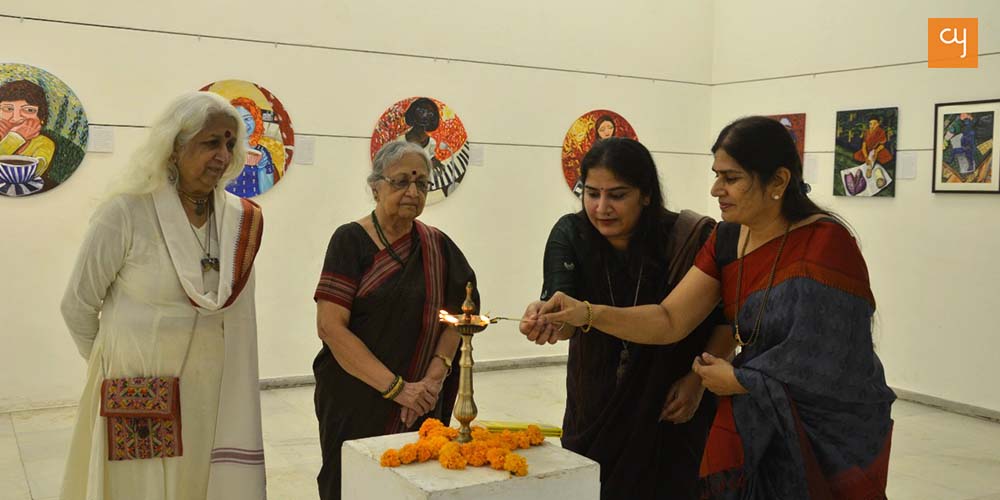 Comprising of twenty-six works of moderate sizes and coming as Shweta’s second solo in a space of a year, this show was opened by two gracious and accomplished ladies of the city, print artist and mentor to many Naina Dalal and artist-writer-critic Esther David. Shweta’s first The Bard in Acrylics – a series interpreting Shakespeare and his characters – was held at Kanoria Centre in December 2018 after she restarted to paint about four years ago coming out from a long hiatus of self-doubt.

As you cruise through the exhibits after the inaugural ceremony, see the works and read the story-like short narratives behind each of them, you discover in awe how they have been created through a keen sense of observation of daily routines, pursuit of leisure activities and ways to unwind adopted by these modern Goddesses; while the artist successfully attempts ‘to make the viewers see the extraordinary in the familiar, the magic in the mundane, and the mystical in the worldly.’ 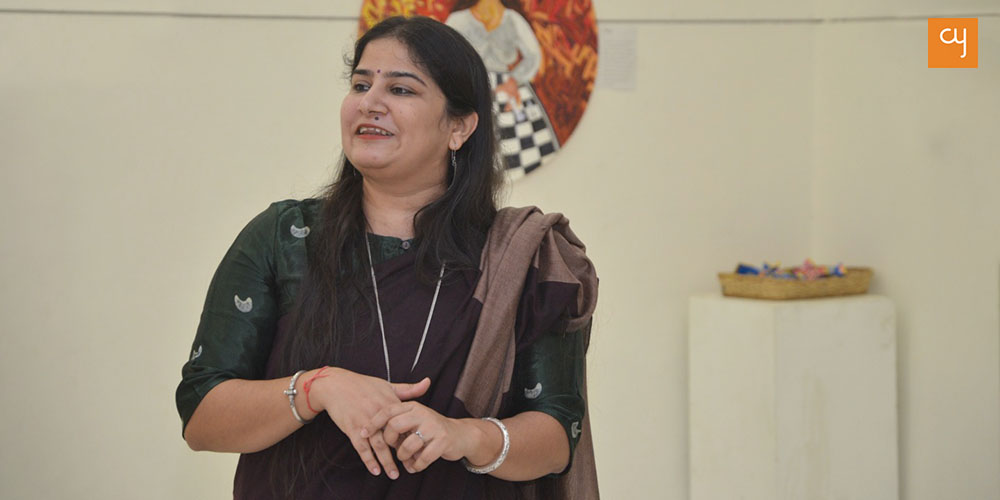 To allay any fears as to the theme of the show, may one say firmly, oh yes, ‘her-story’ is pretty much possible, relatable and appreciable, for, the world only seems encumbered solely with his-story! Actually, it may only be fair to say that it’s just a perception about the continuance of this preoccupation with the male world now, away from the other half and not a reality of the twenty-first century; and to add to that the Indian society is not lagging in any way in that regard.

To come back to the plentiful of interesting stories, so painstakingly pieced together by the artist from out of her interactions in her milieu of friends, colleagues, helpers, vendors in the market place, et al, they would seem divisible in two parts; the first being the part where the artist identifies the subjects by the pursuit of activity and the second being the part where she identifies her works with proper nouns and names. And yet, it comes across clearly, both parts are as intimately known to her as they can be to one who has the fence-side view of the action! 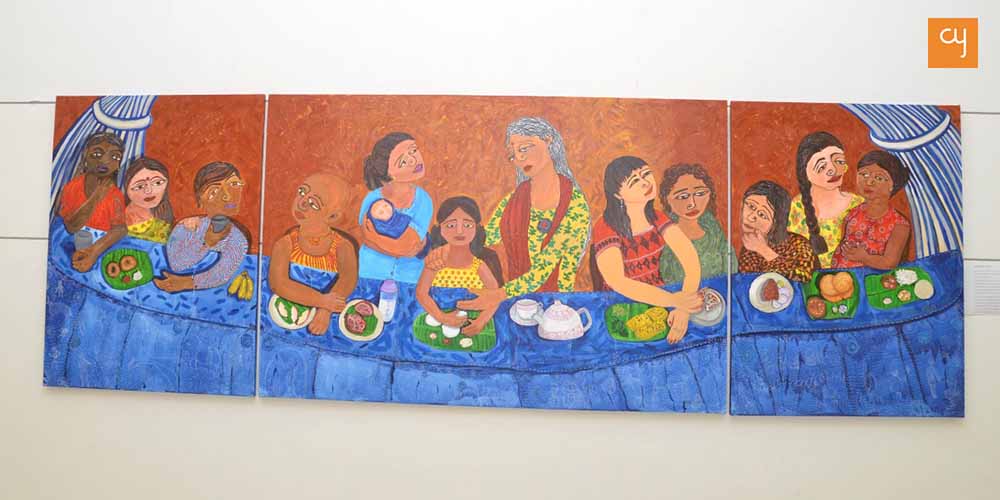 For example, she starts with pet-pooja in Street Food Queen which is her first work on display in the gallery, whereby she puts her finger on the omnipresent culture of street food eating in this part of the country and straightaway touches a familiar chord! While The Binge Queen then presents the other side of binging in-home at all kinds of odd hours, The Kitchen Yogi(ni) – a work complete in detail of old-time kitchen gadgetry – is an allied work that’s the artist’s tribute to the lady who is religious in paying her obeisance to her family through this sanctum sanctorum of gastronomy! As if to capture and sum up the recurrent love of food running through the repertoire – and not the fable associated with the name – The Last Supper shows an all-woman cast savouring a sumptuous dinner! This triptych of a giant work is obviously the priciest of the lot on show! 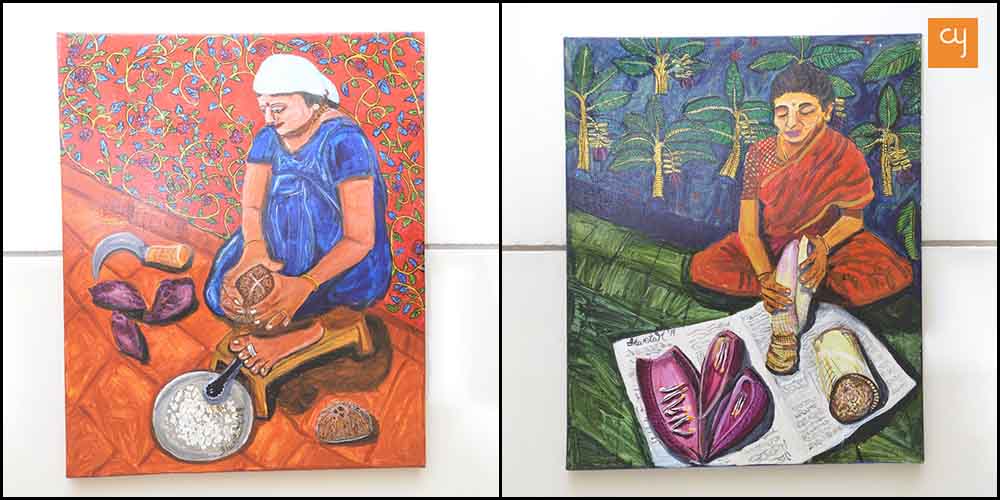 The Reader, Repose, Sharda and even Maitreyi are some of the works that bring out the art of relaxation in light reading over a cuppa or the similar, after the taxing role-play by all these home-makers or professionals or both. Sharda, incidentally portrays a rather studious image of the She in Shweta’s entire narrative and also forms the title shot of the invite of her show. Mahagauri, Chandra and Gargi are works that seem to give a peep into the traits of some of the artist’s friends whose names may have been tinkered even as the works are done as half-portraits in a case or two. These works are also about ‘women’s spaces,’ the significance of companionship, sharing, caring and even argumentation among friends! 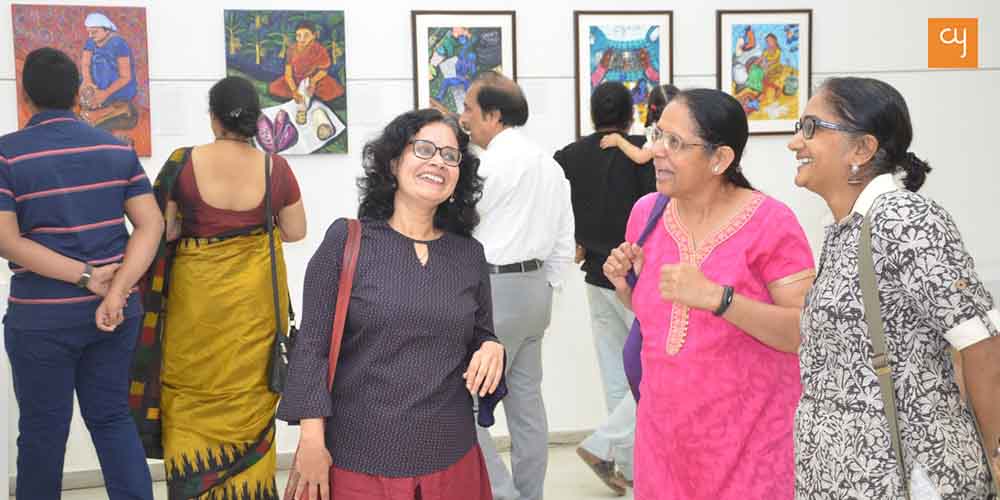 The stories keep going in all the 26 works to capture similar or many other vignettes of everyday life and its tribulations. Shweta paints her women in an unconventional style and yet with innocence, while she uses unusual colours to fill these feminine forms with. Detailing in the works is so complete in keeping with the verbal narrative; and it looks neither extraneous nor overdone. The works on display are done in three sizes, including the rounds and are attractively priced.

All in all, this solo show is worth a visit to discover all the ‘little-stories’ by Shweta, the painter; while the author Shweta waits in the wings for more of her-story via a novel that awaits publication. This show is on till December 01 between 4 pm to 8 pm.