Archer Marches on: And Now a Group Show 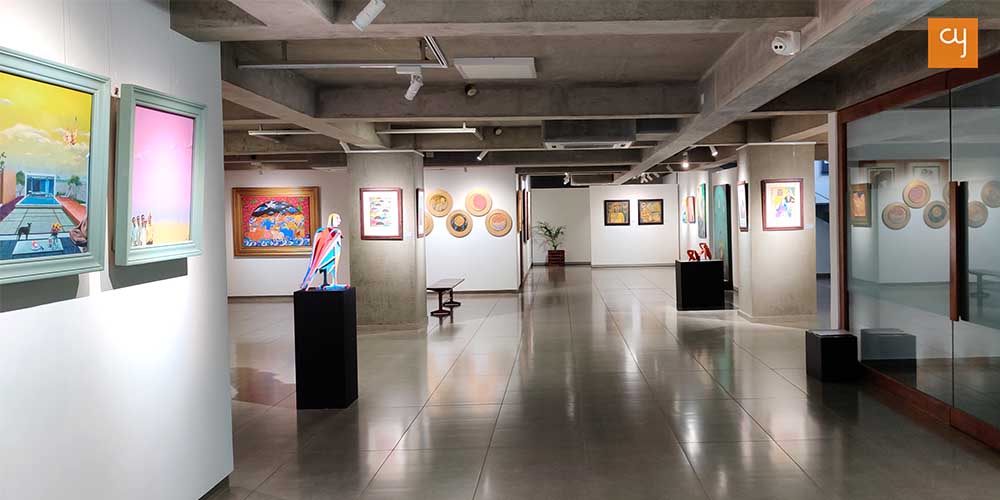 After hosting a number of star artists and their solo shows of paintings and photographs over the last one year and more, the last being When the Pawari Calls by Bhairavi Modi, the Archer Gallery has now turned to hosting a group show of paintings and sculptures. Named Figurative Expressions, this group show featuring thirteen artists from all over India and Ahmedabad was thrown open to art connoisseurs on Friday evening, November 29. 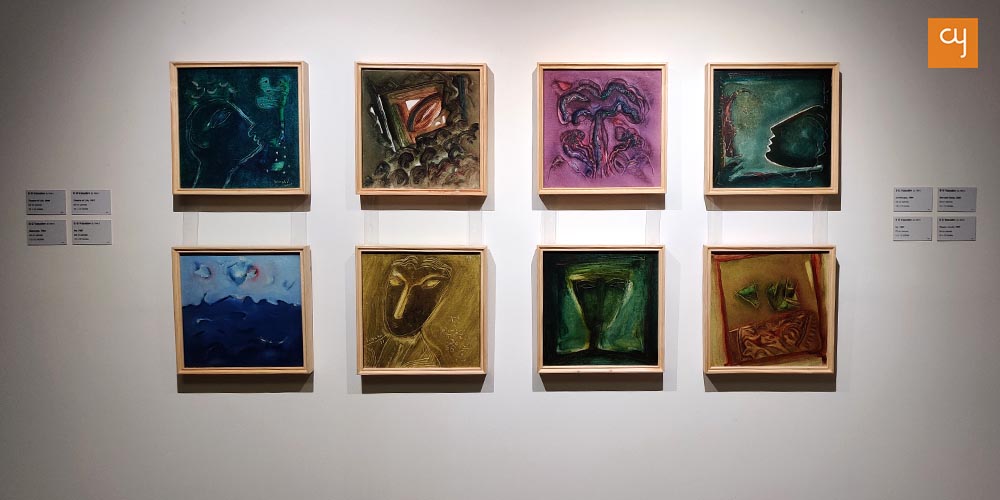 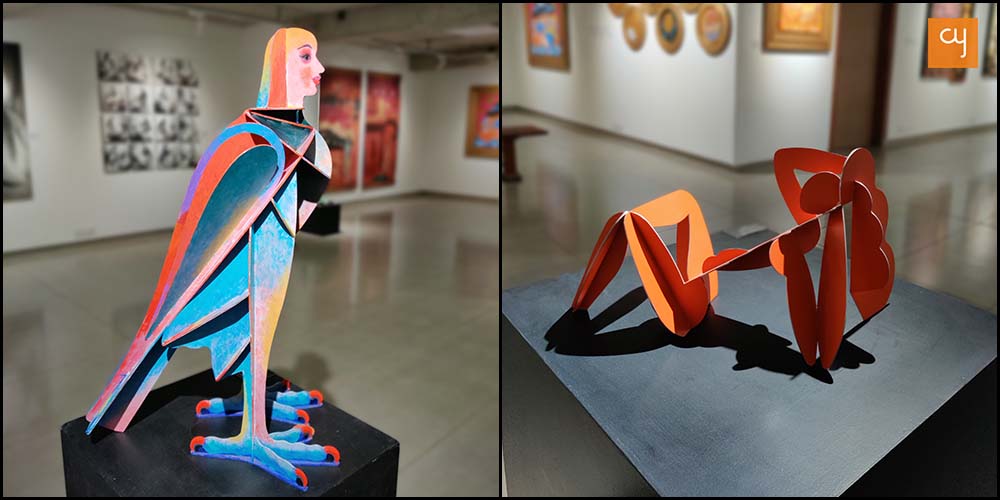 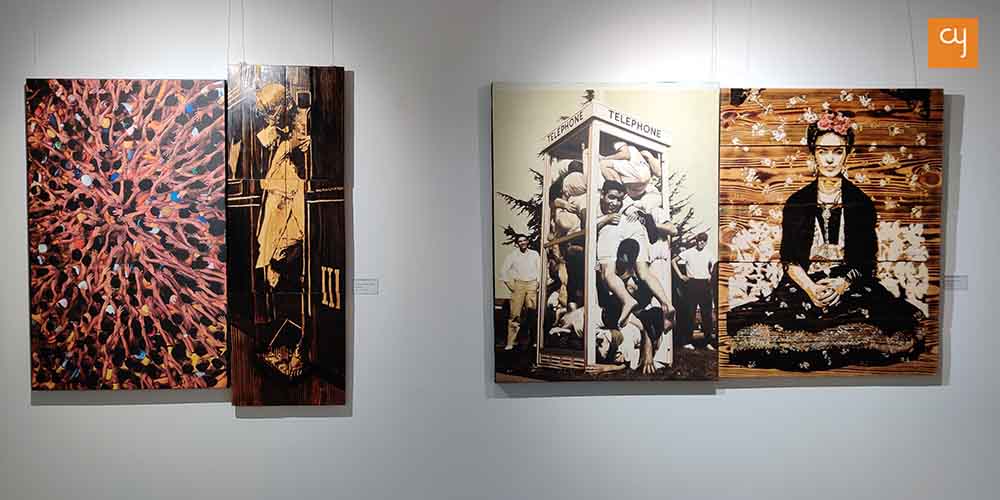 Of these thirteen artists, while two Dhruv and Shanta have sent in their sculptures, others make an appearance with paintings in all kinds of media from water-colours to oils to mixed media to tempera. Shanta’s work in bronze The Lady -with the Apple is a slim petite feminine form in a sitting posture – making it a study in sensuality. Cutouts of steel painted with epoxy the three works The Little B, The Sky and Recline in Vermillion by Dhruv are eye-catching. The Sky in a way is reminiscent of Purush and Prakrity who are inseparable.

In his eight works of small size – all in oils, Vasudev dwells on Theatre of life, gives a Seascape in hues of blue and an Earth-scape in dominant violet; and also offers studies in male and female human faces. Rini Dhumal has also painted women in two of her 2019 works in mixed media even as the works are captioned ‘Untitled’. Again all three works by Thota Vaikuntam are studies of female forms depicting bulky women in dark skin, sporting big red bindis on the forehead, native jewellery and bright costumes in keeping with his unique style; although a third work has a male escort, a flute player who lends the work its title. Vrindavan Solanki the Ahmedabad veteran comes across as the most prolific of the lot with sixteen of his 12” by 12” acrylic works created in 2019. The works depict faceless human forms as his won’t in the artist’s favourite black colour. A seventeenth by Solanki is a charcoal work from 2015 that is a composition on a Mother and a Daughter. 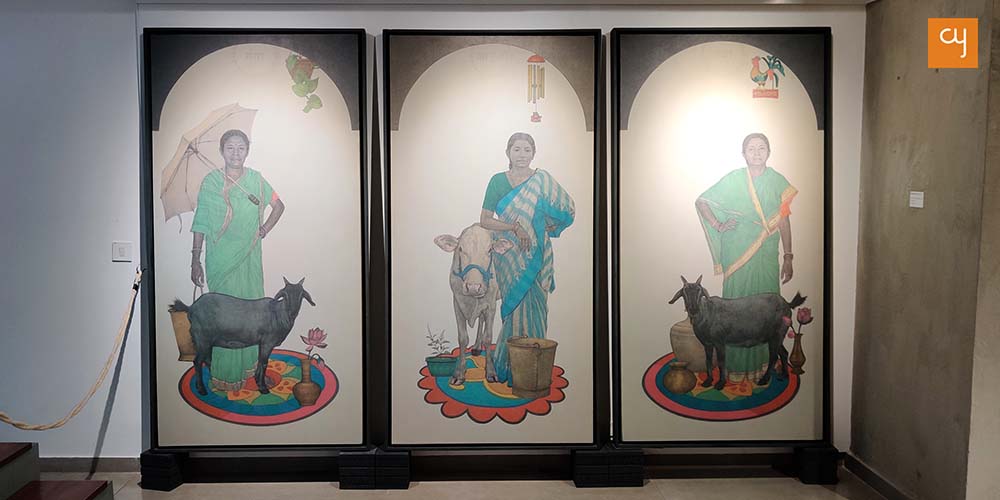 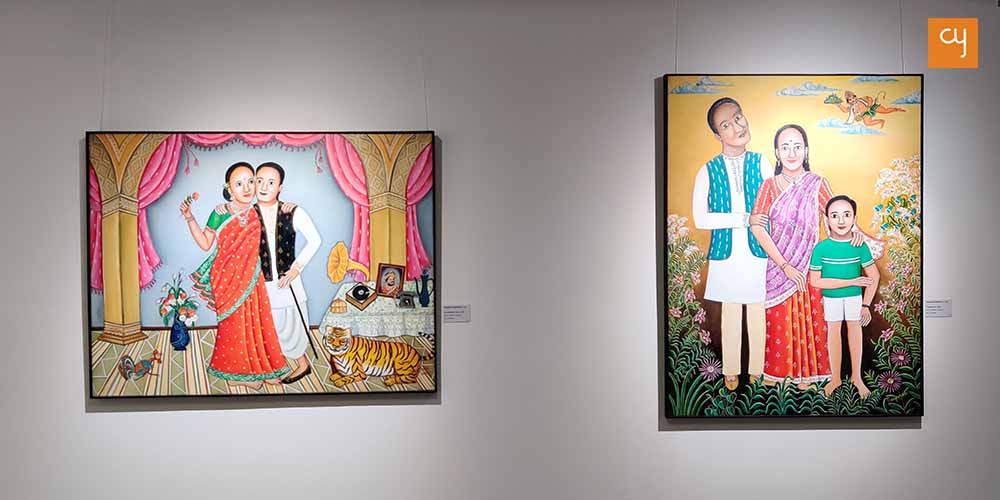 Nayna Kanodia demonstrates a bit of her versatility as six of her works use both paper and canvas for surfaces and water-colours, oils and glitter as also mixed media for her creations. The themes of these works abound around home, familial bliss and togetherness, barring one where she creates a frame full of colourful umbrellas held out against the rain by a mass of people seemingly soaked in joy! Seema Kohli of Delhi and Poushali Das dwell on themes from mythology, astrology and Mahabharat. Seema’s works richly detailed in acrylic & ink and embellished with gold and silver leaf, viz Krishna Krishna Ras and others from her Moon Myths and The Golden Womb series offer some visual delight; and regulars would recall these or similar works were also the centre of attraction at her recent solo in the town at 079 Stories. Poushali’s Draupadi Purva Katha is a tale of the Mahabharat nayika’s previous births and makes an interesting statement in tempera on a diptych of canvas sheets. 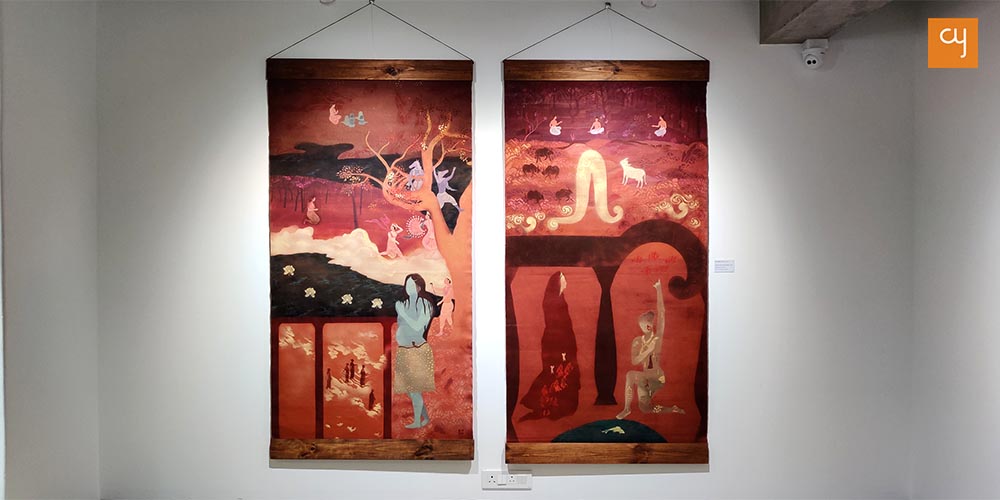 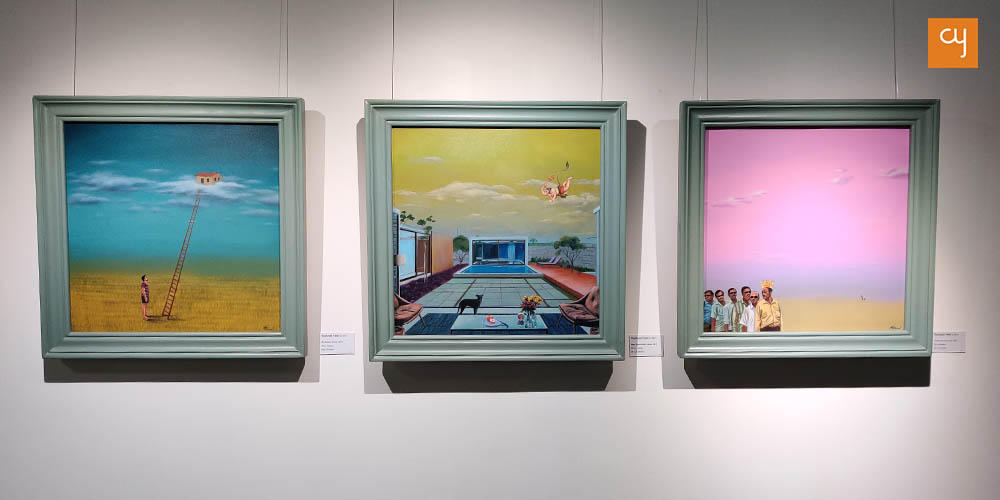 Hindol Brahmbhatt’s two diptychs in mixed media stand out for what looks like an experiment in juxtaposing modern heroes (Mahatma Gandhi and Frida Kahlo) with their fans and followers.

There are many more interesting works to be seen from the repertoire of other younger artists, viz Shefali Nayan, Muktinath Mondal and Dushyant Patel. A visit is a must to have a firsthand feel of the works in the cool and relaxed setting of the Archer Gallery, and the show will be on for all the time in the world till January the 11.