‘Bark is the Song of the Dog’: Looking Back in Awe and Despair 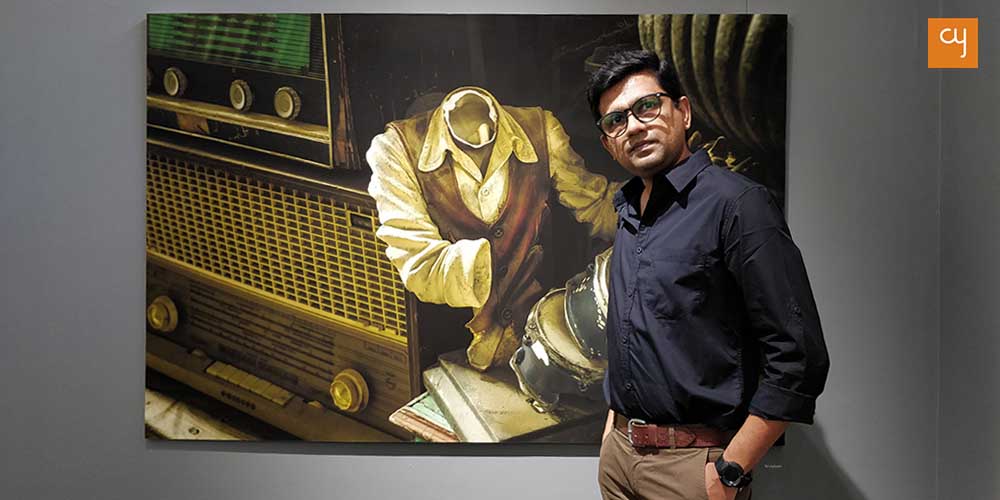 After we come out from a show of paintings inaugurated earlier, where a whole city is pegged to the realism practiced by the artist, we also head to see this photography show beginning on the same evening. This show seems to sift what has turned absurd in the reality of the past around, where from the artist finds his impulses and breathes in creativity for everyone to see! Called Bark is the Song of the Dog, this show of photographs by Anuj Ambalal – the younger son of well-known painter Amit Ambalal – opened at the trending space  079 Stories in the far west of the city.

Curated by Khushnu Panthaki Hoof and hosted by Purva Damani, this show features some five dozen plus photographs in colour and monochrome inspired by and shot at some warehouses dealing with discarded household items, some of which may pass for ‘antiques’! 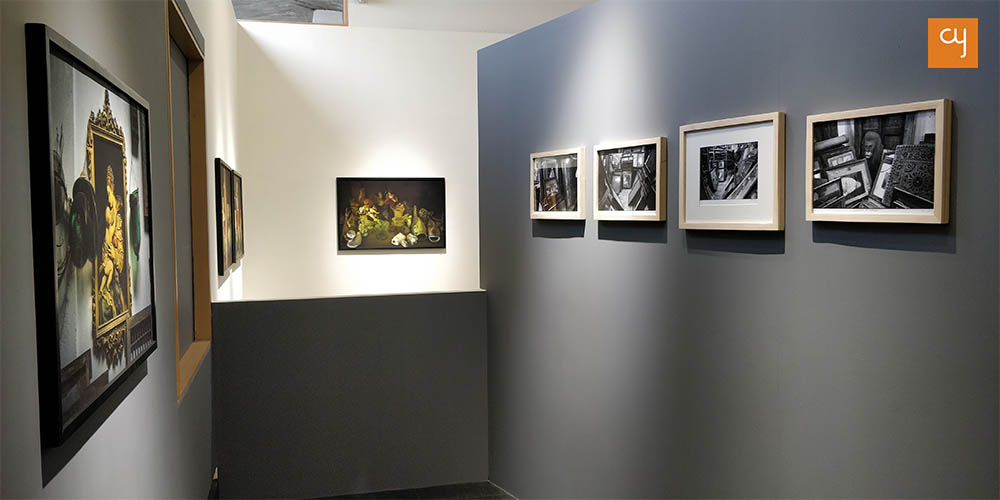 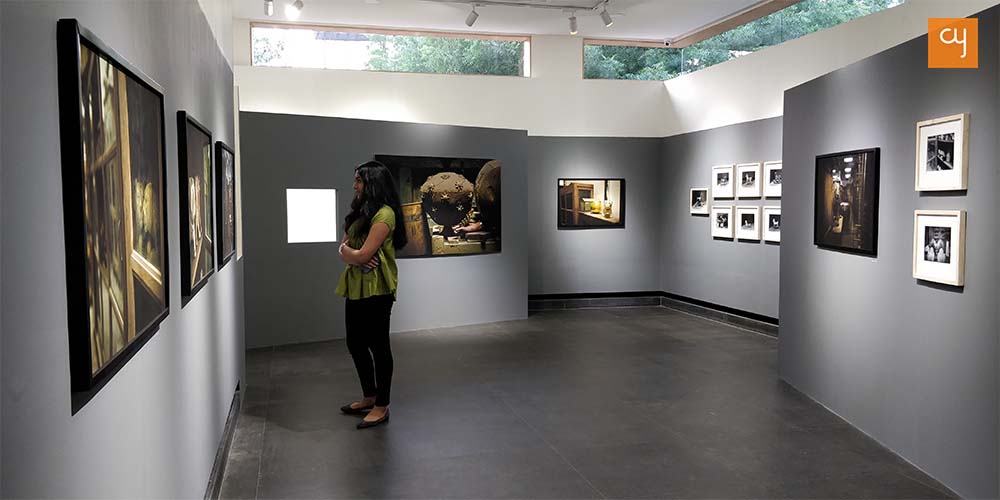 While the photo artist has dwelt on Lord Shrinathji of Nathdwara and Mahatma Gandhi in the past, this time around he chose to focus his lens and the viewfinder on things that have outlived their “purpose” in a household and have thus made their way to warehouses. The photographs that were shot on a black and white film with an old Pentax 35 mm camera to actually overcome a phase of “shooter’s block”, “proved to be a liberating process” for the artist! A look at the prints a few months after the shooting and the following hiatus revealed what Anuj calls their “absurdity”, “tragic-comical” quality or “Kafkaesque humour”; and thus was born the idea to put them on a show for the art fraternity! 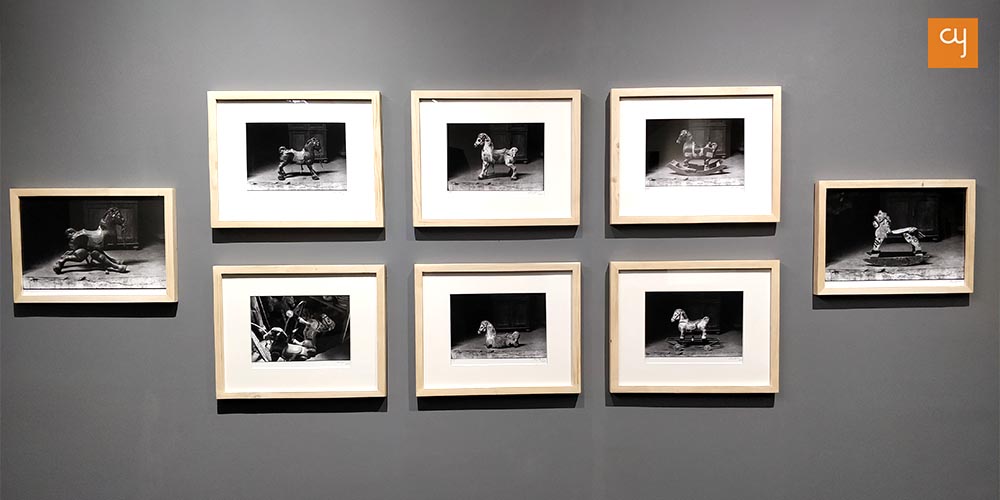 Shot in more than one warehouses (one of which, possibly the bigger of the lot, is located in the Dani Limda area of the South city) and where all kinds of memorabilia can be found for reuse and recycling as per need and choice, some of these works certainly evoke dark humour, which is accentuated by the carefully phrased catchy and very communicative captions by the creator of the images. 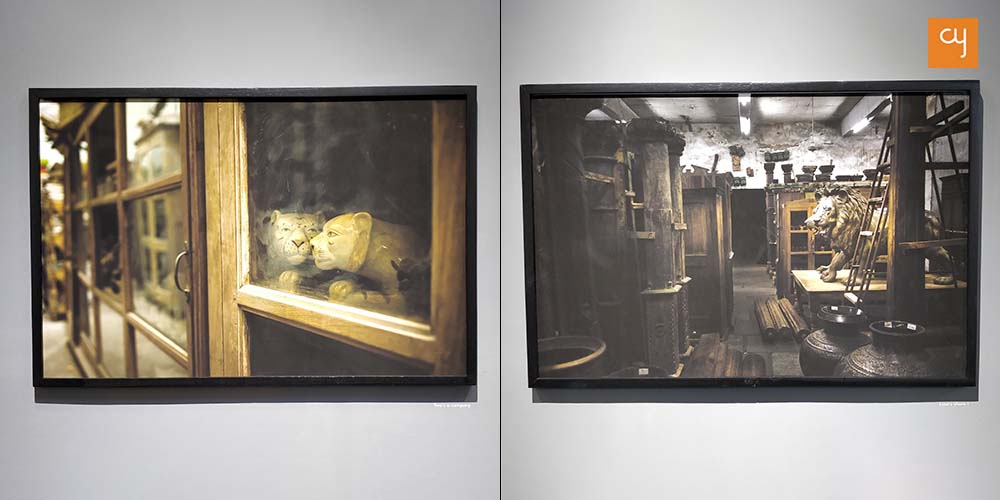 Sample a few of these captions like: As I Please for a portrait picture of late PM Indira Gandhi stocked on top of a pile of other picture frames; Hear The Wind Sing for an old design table fan; The Famished Road depicting a forlorn corridor of the warehouse with used items strewn on both sides; Strange Library shows another corridor full of almirahs not of books but sundry items!

Move on and find Virgin of the Wall showing a mother and a baby; Hitchhiked for a kid car; Family Affairs I and II for another pile of portraits and family photos; Noah’s Ark is the title for a cluster of porcelain, glass and china items; Contemplation speaks solidly for a model Tortoise slow in motion, but definitely cast in a forward look; The Joke relates to ‘laughing lions’ juxtaposed with what looks like a bulldog! And while on lions, Men without Women is the caption given to two lions who find themselves confronting each other; something that also draws on a famous tagline from the ad world “men will be men”! 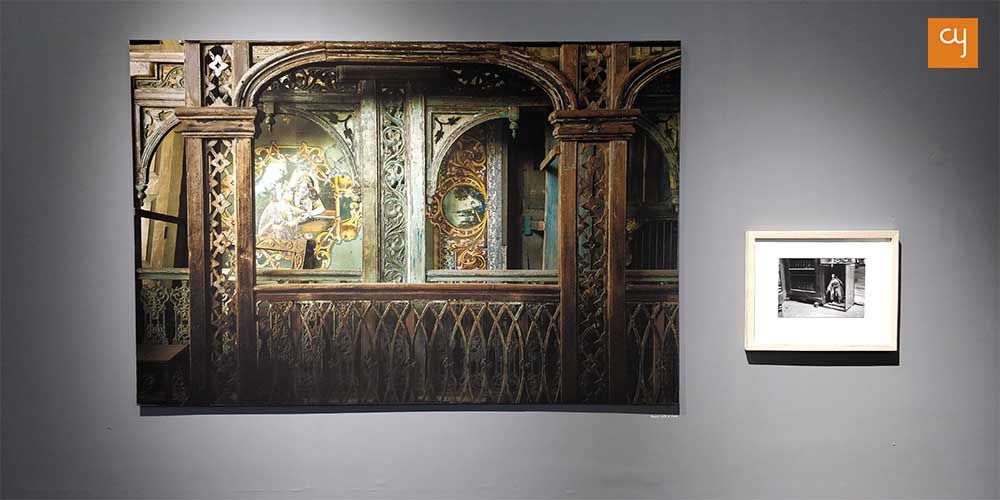 To go with the photo-artist’s description of his work, the pictures in the show do underscore the abundant absurdities, but also the paradoxes that lie scattered in life around all of us that we may or may not notice. It mostly takes an artist’s roving and alert eye to spot them and present them to us! 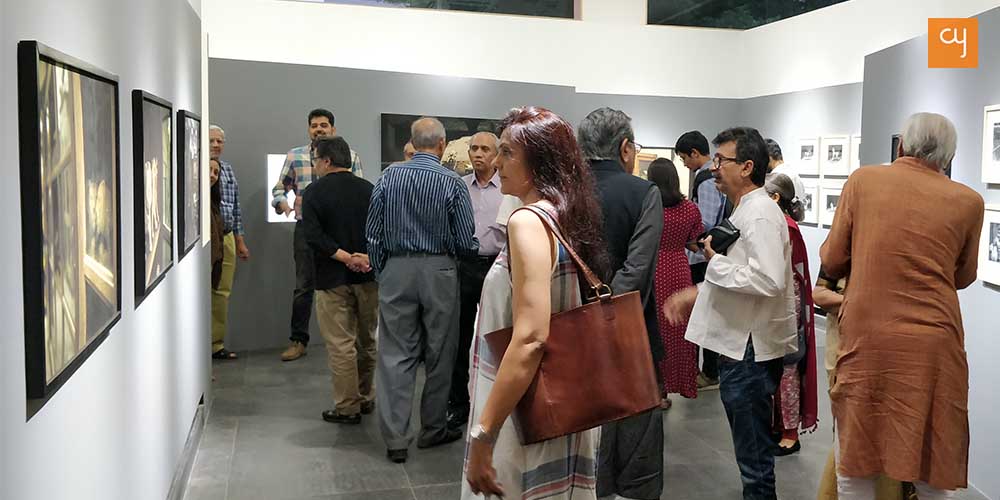 While that surely is the job of the creative class, interestingly and poignantly, the objects brought to frames in the show depict a certain irony of being discarded after living a life of utility in a social construct called the household; something that further applies to the living beings of this construct called family also, the humans who are destined to be gradually relegated to an inactive, empty and meaningless life in the family, or in the society as they age and slow down in every respect! The takeaway would seem to be is there a way to break the mould and not be discarded in life?

The show that spurs the existentialist thoughts is on till December 10 every day from 11 am to 7 pm.