Ruby returns with a solo on ‘Maya’ 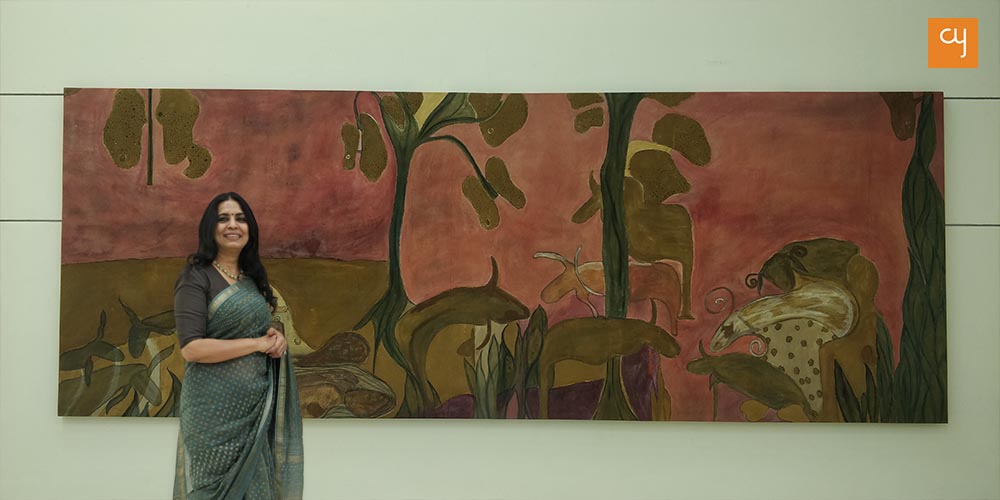 Maya – the well known philosophical concept about the world being illusory and how not to be entrapped in its quagmire is a much sought after quest for many. More so for people in the spiritual academics and artistic pursuits. So also for some people advancing in age as they gradually relinquish the material pursuits in their intense form and manifestations.

The world in its innate settings and natural human pursuits both are thereby very popularly referred to as Maya the Thagini – one that cheats and misleads the human being from pursuing Moksha – the Salvation – considered the ultimate and the real objective in human life according to the spiritual training; to get over and to go past the ‘aana-jaana’ in this mortal world through its various life forms and with the eventual objective to become one with the Eternal Power that is God! 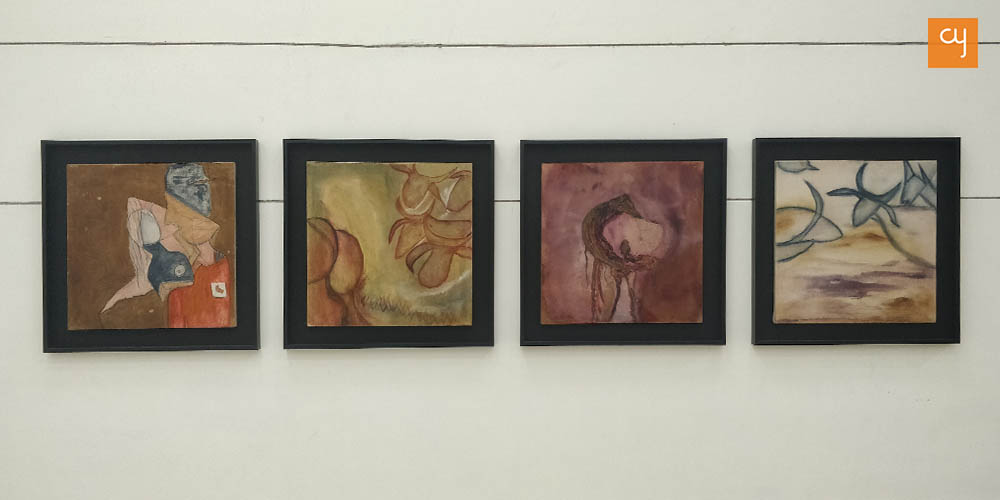 This “Maya” is the subject of the new solo show by Ruby Jagrut Brahmbhatt that began at Hutheesing Centre on Friday evening. Returning for a solo after a long gap Ruby has created and displayed some twenty plus works at the show in her own quest to relate to, understand, interpret and also make her viewers understand what Maya can mean to various people. These works on display have come in very many sizes from squarish two-footers to may be mid sizes of three by five and then large ones covering almost the two walls each lying along the breadth of the Gallery. 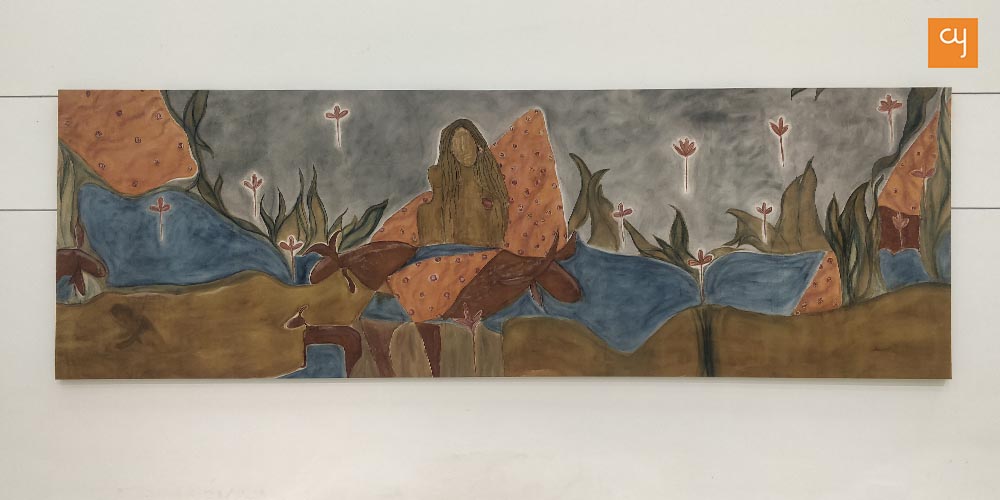 Ruby has a penchant for natural dyes and colours – she claims to have a passion for earth – and had even written long bookish texts as part of some projects on the subject about two years back. Her long gap in showing her own creativity in a substantial number in a solo is attributable to her pursuit of and preoccupation as the founder of Abir First Take, Abir Space and Abir Pothi, her ventures and forays into organizing pan-Indian art competitions and shows, creating spaces for art and commissioning and managing content on multiple facets of art during the last six to seven years. 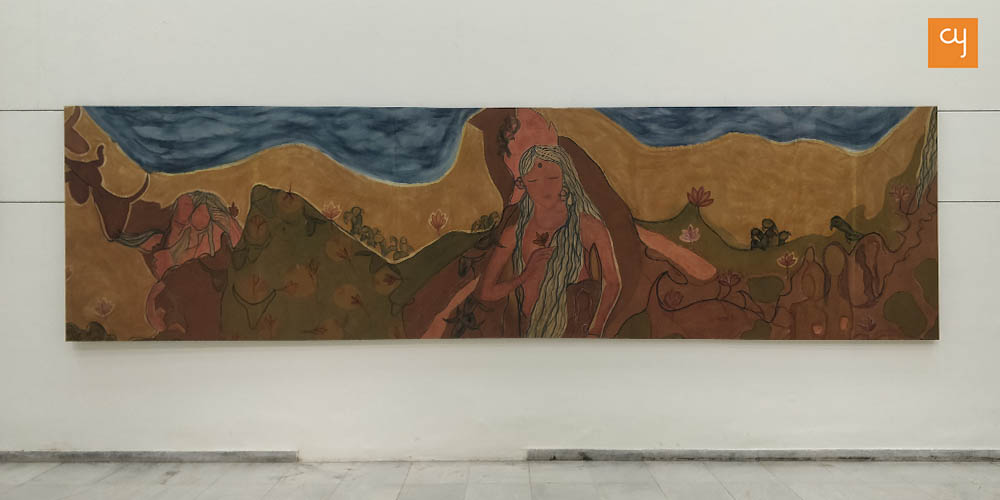 She took the last edition of the show series Abir First Take to New Delhi in November 2022 after holding very successful previous editions in Ahmedabad which were well participated by artists and jurors invited from other cities and well attended and visited by local art enthusiasts, thereby proving Ruby’s mettle and verve as an organizer with vision, flair for detail, big scale as well as quality. 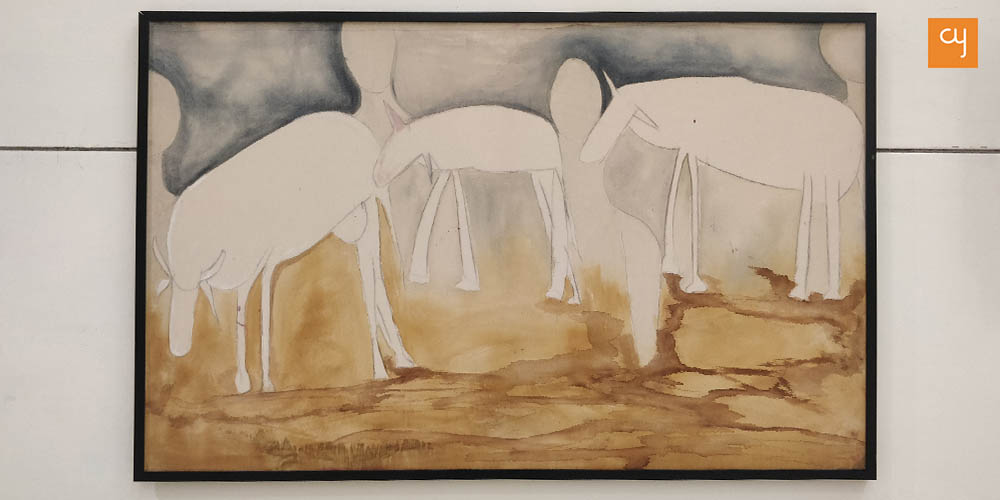 Now that she returns as an artist, the choice of her subject is very interesting, more so in the Indian context, even as the word Maya rings a bell in Greek and Hebrew traditions also, besides being a proper noun as a very popular name and having given several celebrities over time.

For Ruby, Maya is an “admixture of dream and memories in the blur of the consciousness”. So we are kind of expected to look at her works with this tagline take as the point of departure! Since dreams tend to hover between clear scenarios on times and hazy ones on others, so does the consciousness and memory of the past, is it therefore due to this that the overall tonality of Ruby’s present works comes across as unsharp or shuns at acquiring bright dazzling hues, or may be a little muted for some viewers? No, the tonality in fact goes well with her passion about earthiness and also with the mystique of Maya. 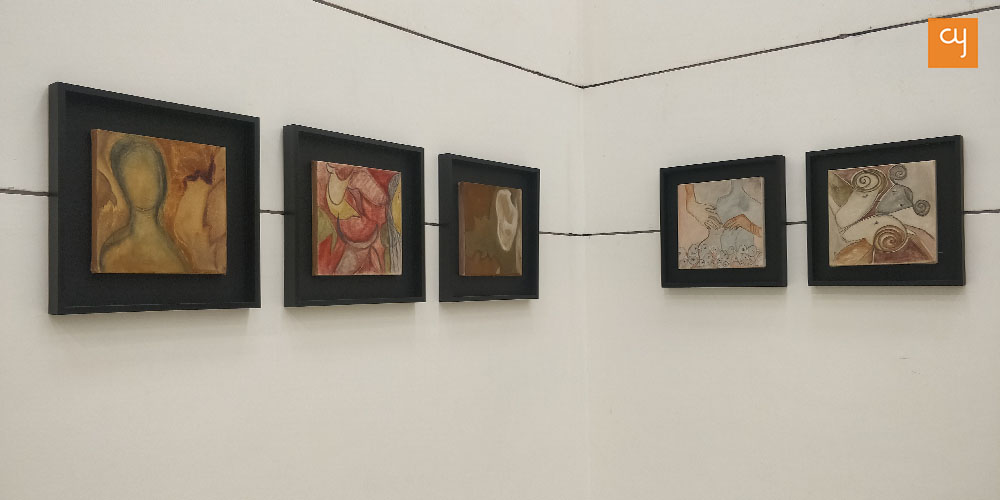 The overall finish and appeal of her Untitled works is therefore, predominantly brown, rustic and rooted in earthy colours. The forms comprise of a balanced mix of humans, flora and fauna – perhaps signifying and reflecting the spread and spell of the Maya cast all over the planet earth, if not the entire cosmos. The forms captured on the canvases vary in depiction from realistic to hints in half abstracts.

The two large works on two opposite walls of the gallery hold your gaze for their gigantic size and the statements they seem to make. While a triptych work is interesting in its extended overlap of its animal forms, another work of a female in the typically bold demeanor comes across as a direct encounter with Maya which is all-pervasive and affects the self the most! You also see a depiction of the proximity of the Prakriti and Purush as an extension of the Maya in a couple of works that also border on the side of abstraction for their style of painting. 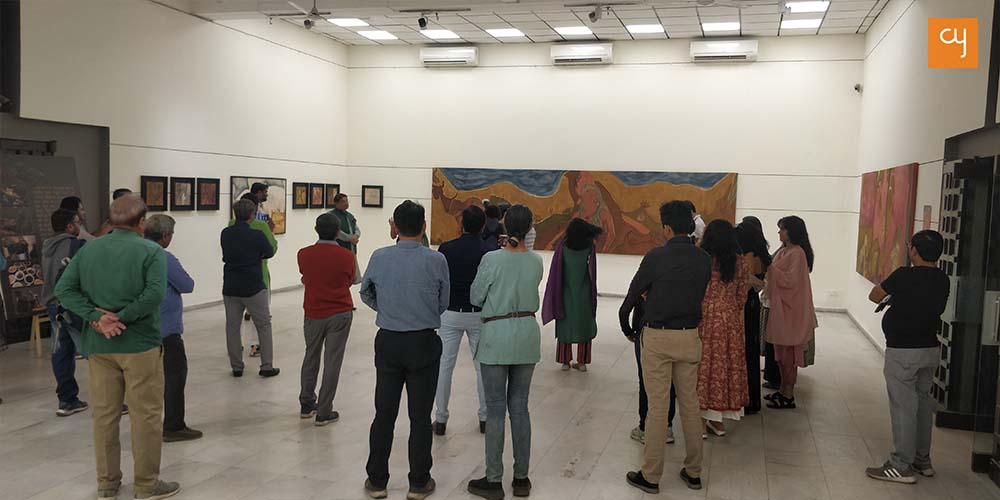 All in all, an interesting show from an art organizer-storytelling writer-artist. As a viewer it is an opportunity to decipher Maya in her myriad representations in the mystic colours of Ruby Jagrut.