The Indian Portrait by Archer: Waiting for a Permanent Museum 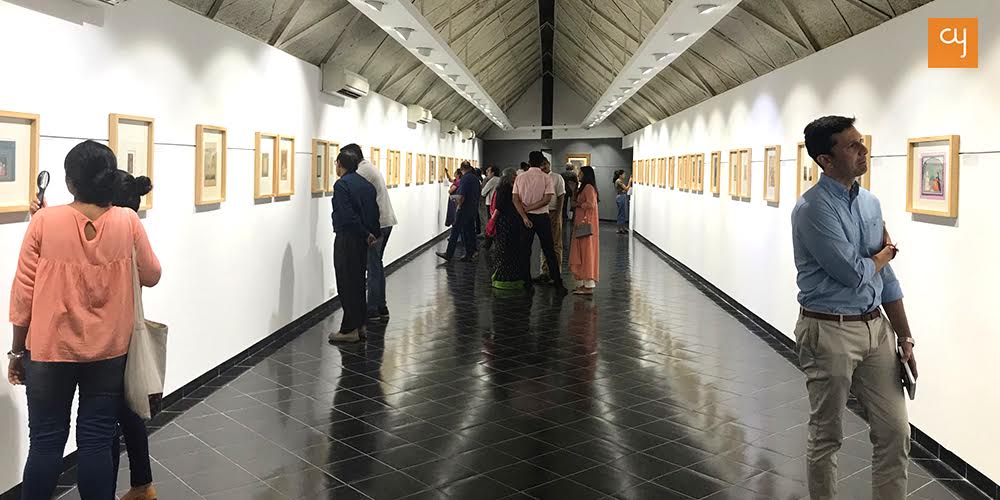 The much popular and well-known showing of The Indian Portrait by Archer Art Gallery has come a full circle. That’s, it has actually come to a significant milestone for these exhibitions under the series now with an overview in the tenth edition. Captioned “Visions of a Bygone Era: 1590 – 1890” this Xth show began with some huge turnout at the Herwitz Art Gallery in Amdavad ni Gufa campus on Tuesday.

Starting nine years ago in October 2010, the personal collection of these portraits with art entrepreneur Anil Relia has enchanted the art circuit with some outstanding shows segmented under different themes – schools of style, courts, periods of history, regions, photo-realism, colonial influence on Raja Ravi Varma, et al, of the art of Portraiture in India pursued from the middle to the modern ages. The collection has such lasting worth for compiling insights that the last Edition IX in December 2018 was exclusively focused on Parsis and another show in March 2019 – though not announced as an edition proper under the series – was based on Manorath Paintings from the same collection and had also resulted in a book by the Italian researcher-curator Isabella Nardi who collaborated with Relia for the purpose. 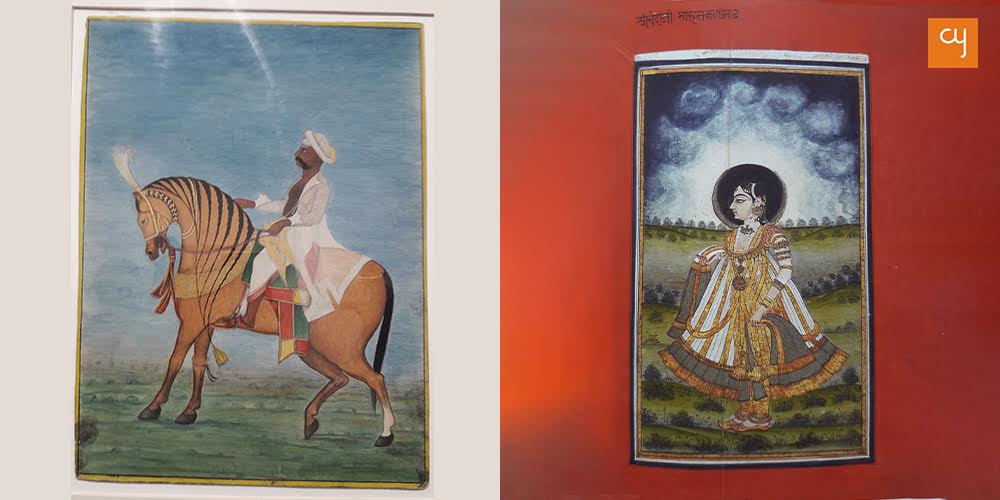 The present Edition has also attracted a foreign researcher-consultant -cum – curator Julian Roberts who has documented the works by capturing the essence of portraiture art in India across rulers of different dynasties and geographical regions covering a period of 300 years till 1890. The show comprises of 51 exhibits, mostly miniatures. The works are accompanied with biographical sketches of the subjects concerned and some other relevant details, documented in a catalog prepared painstakingly by the collaborators – something actually done varyingly in past editions also. The initial idea of the show was for showcasing works from Mughal and Pahari schools which seem to be more prolific and North-centric, but as the collection opened up before the curator, the idea evolved into including the works from central and southern regions of India and the show was mounted in a chronological order.

So we now have a show that features portraits from Jammu (Raja Dhurb Dev) to Thanjavur (Kamatchi Bai Saheb) and from to Kutch (Rao Desalji II) to Kathmandu (Jang Bahadur Rana) during the three centuries under focus. As for trends, the curator draws our particular attention to a few highlights like the sustained interest of Mughal Emperors and their chieftains in the art of chronicling their persona even in faraway places; the austerity in portraiture during the period of Aurangzeb when portraits ended up as relatively simplistic works as brush drawings, possibly low on the use of gold; the reasons for which though do not come across clearly. 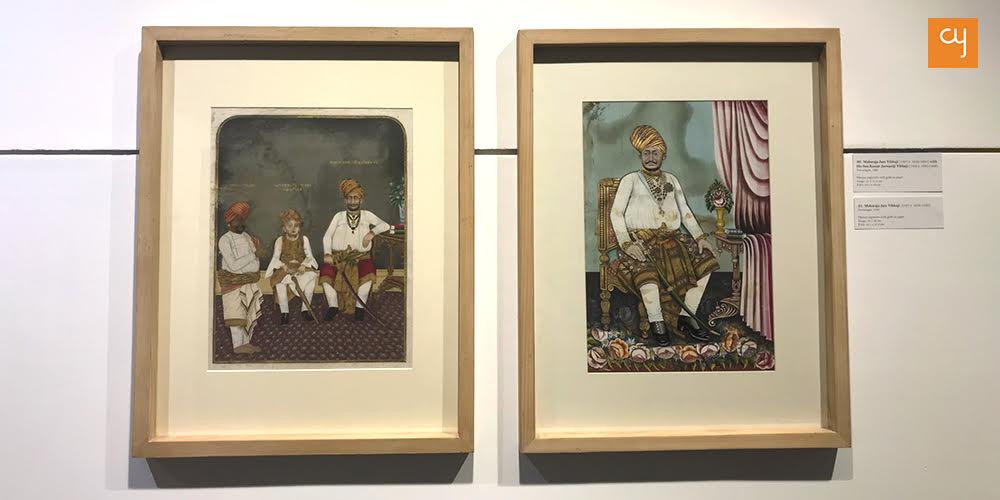 But what you do notice as a visitor is that the trend in portraiture emerges from individuals to father-son duos or even quartets, couples or even family in some cases when a toddler is included with the couple. Some of these works even include a servant or courtier in attendance, who is obviously not named. The women find a fair place for their brave leadership, beauty and intellect, as also for creating a variety in the repertoire. This brings in portraits of Begum Samru, Begum Shah Jahan of Bhopal, Rani Laxmibai of Jhansi, Kamatchi Bai of Thanjavur, the dancer-poet-intellectual Maha Laqa Bai of Hyedrabad and Nawab Sikanadar Begum also of Bhopal (mother of Shah Jahan Begum). While on women as subjects, one must mention a work involving Zeb-un-Nissa, the daughter of Aurangzeb which is featured as “A Mughal Princess Relaxes on a Terrace” that forms a study in romantics of the activities of the zenana and is mentioned understandably as a popular pursuit from the period of Jahangir onwards.

Of the Mughal Emperors, Shah Jahan and Aurangzeb stand out in the select works alongside other Nawabs, commanders and ‘bearded noblemen’, while Man Singh I from Amber and brother of Jodhabai who worked for Akbar finds a prominent place for Rajputs of Rajasthan. Two more Man Singhs are also featured, one of them from Ratlam and another from Guler in Himachal. Eventually then, Rajput Princes and Kings find a substantial share in the works and the show in keeping with the period when princely states co-existed and fought with Mughals and later with the growing territory of the British rule in India. 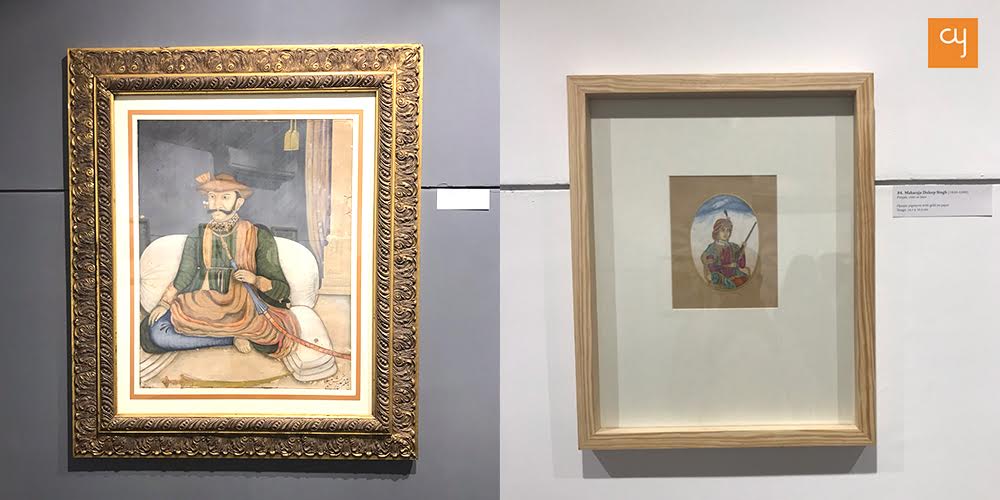 While royalty and the like rule the roost, the show interestingly includes portraits of people like Urdu poet Mir Taqi Mir, The Bengali Man, Baba Shree Padma Pant and Acharya of the Swaminarayan Sect Ayodhyaprasad ji Maharaj. Acharya ji belongs to Gujarat and more of the state is seen with three portraits of Jam Vibhaji and Desalji of Kutch.

These works of portraiture are mostly done in opaque pigments with gold on paper with some others done as light washes of pigments and even brush drawings. The works are attributable to the portraitists like Khairullah, who seems to be the most prolific and headed the royal atelier around 1800s; Bhairav of Gwalior, Phagu of Nurpur area, Baldev of Alwar and so on.

Even as the city has by now seen Relia’s collection of portraiture in ten editions, it is obvious that it remains fascinating in its various incarnations and its significance calls for a permanent exhibition in a museum. In fact Relia has himself spoken on the aspect and indicated his desire to pursue that objective in future. While every art lover would wish him success in that endeavour, this Xth edition of the Indian Portrait is here to relish and enjoy till Sunday, September 22.