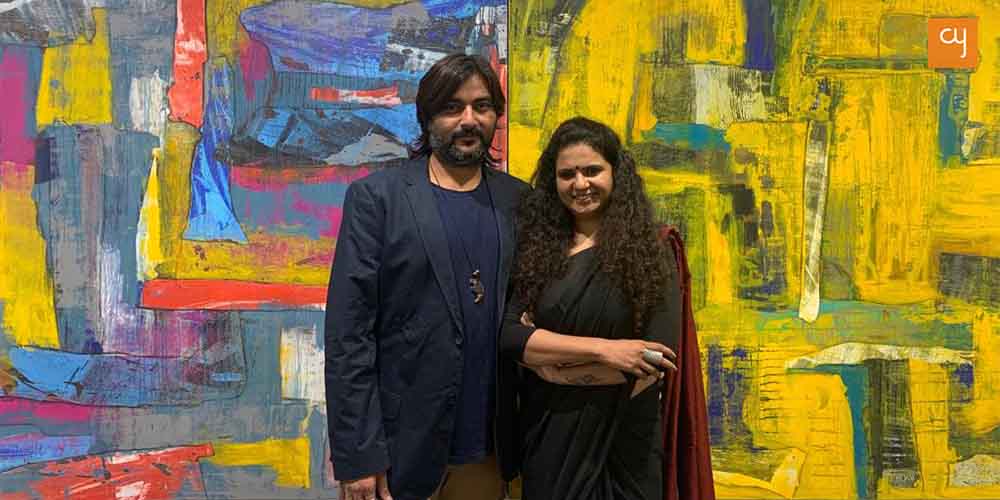 #Transformed: Divergent Individuals, the new show of artworks by Roma and Rakesh Patel that began on the auspicious day of Dussehra is a mix of two very distinct flavours created by the husband-wife duo who were both trained at CN College and have been pursuing art together now for a decade. What’s obvious inside and outside the show is they do it rather diversely and divergently, the tagline in the invite says that too! The show started at the most-sought after Herwitz Gallery in the Amadvad ni Gufa campus without a formal opening as guests, art buffs and friends of the duo just kept streaming in from the appointed hour.

Coming after their satisfying joint show in New York last year, this one follows the same pattern in as much as Rakesh continues to focus on his concerns about the flip side of urbanization while Roma is her usual emotive, spontaneous and instinctive self with her abstract patterns flowing out on canvases without any specifics, or being tied to any boundaries as to themes. And hers are all expectedly ‘Untitled’ works. 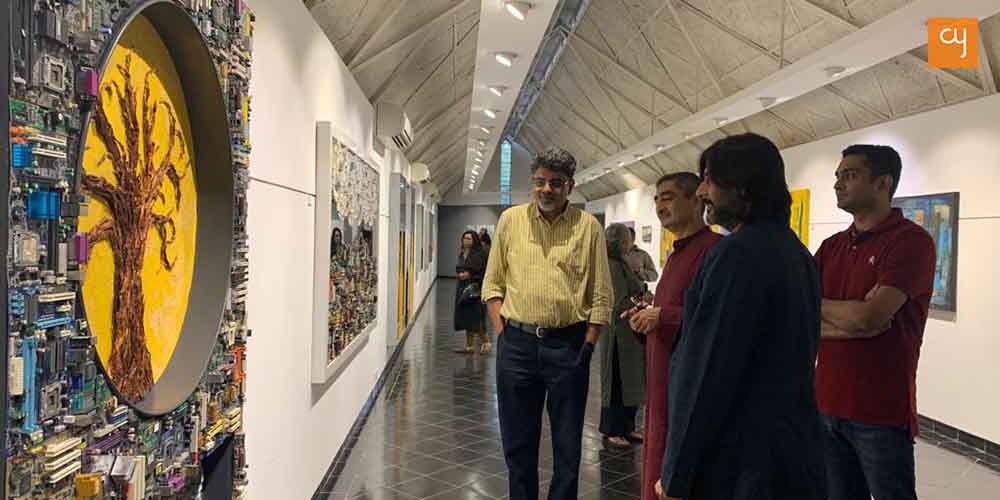 Rakesh, as the regulars would know has moved from portraiture centered on kids in the family and in the neighbourhoods or slums to other forms in realism to lately his forays into urban themes borne out of the ecological imbalance the phenomenon has been creating for all of us to see, contend or bear with; even as glaciers melt and rain forests fire up uncontrollably. In between, Rakesh also acted as the mover and shaker for the art community when he managed with the help of his compatriots Ronak, Milan, Vipul and of course Roma, under the aegis of their informal group Indian Art Affair, a few shows with invited artists. These artists were asked to try a different form or experiment with another medium or mode to catalyse the evolution of their innate strengths as artists. That’s when we saw the ventures on wood titled the ‘Sanctity’ in December 2015 and in multi-media titled ‘Samay’ in December 2016. 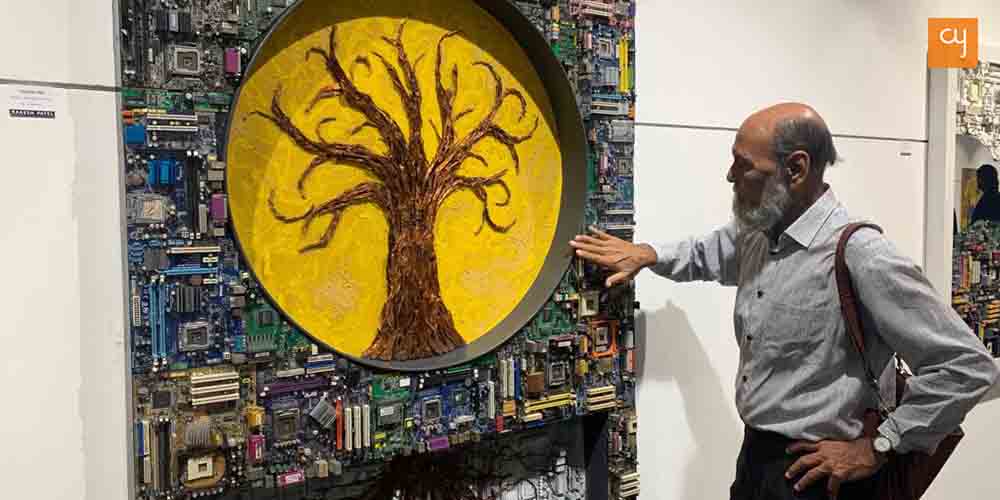 Including a triptych, the present show has seven painstakingly executed mixed media works on plywood by Rakesh that portray his concern about the urban chaos. In a unique use of materials, he depicts the ‘jungles of concrete’ with the help of circuit-boards that create an illusion for multi-storied match-box buildings forming the predominant façade or profile of the modern cities, Ahmedabad included. The idea to use the circuit boards in the above context occurred to him while looking at a pile of these boards in the flea market at Ellis Bridge a few years ago. Similarly, copper wires have been used to portray a ‘golden tree’ to metaphorically highlight the weakening roots of our living traditions.

Titled Golden Tree, Amdavad, Urban Uproar and Walled City 1 to 4, these weighty works generally highlight the flip side of the flawed urban planning which is neither futuristic nor seamlessly blends the depleting natural resources with modern infrastructure. What’s unique is that these works draw on the essence of the city as they bring in the well-known elements of architecture, the culture of the traditional pols and the eternal river Sabarmati that divides the city, to accentuate the contrast and the need for conserving the heritage of all kinds.

The work titled Amadvad in landscape format has the river Sabarmati depicted in a serpentine shaped looking glass as it divides the city into East and West parts. While the East side of the city in this work is created in white for its largely symmetric building and uniform living traditions, the Westside is created in multiple colours in keeping with its asymmetric cosmopolitan growth which though myriad is also haphazard at the same time.

With two cluster-works, Roma has displayed a greater number in the show and they convey a free flow of colours and latent emotions that underlie the works. Ask her about her creative process that is essentially abstract in the present and Roma recounts how she started with landscapes and later had a fancy for drawing the fish in its ‘shiny forms’. The choice of fish may have been instinctive for it symbolizes quite a few things in life: fertility and rebirth; creativity, serenity and intelligence; health, abundance and strength and so on; some which betray a feminine trait and hence the fancy! And yet she was eventually destined to move and find her lasting expressive comfort and satisfaction in abstract contours and forms on the canvas; through a self-discovery a la Jackson Pollock or Frida Kahlo, for ‘every good artist paints what he is, or knows the best’!

Probe her a little more on colour schemes or patterns that could appear in her ‘involuntary expression’ on the board and she confides she discovered on hindsight that her colours were dull when she painted in melancholy moods but they tended to be brighter when she was cheerful! Bearing a logical testimony to that revelation, Roma’s acrylic works on show include even blank panels indicating a kind of total vacuum in expression; have heavy grey or black tones or balanced tones of blue and greens and finally bright yellows in their anatomy. Ask her the vain question if the two of them have influenced each other’s styles or do they compete in terms of quantitative outputs and she only has to point to their visibly divergent styles; but yes the numbers do become a point of discussion sometimes. 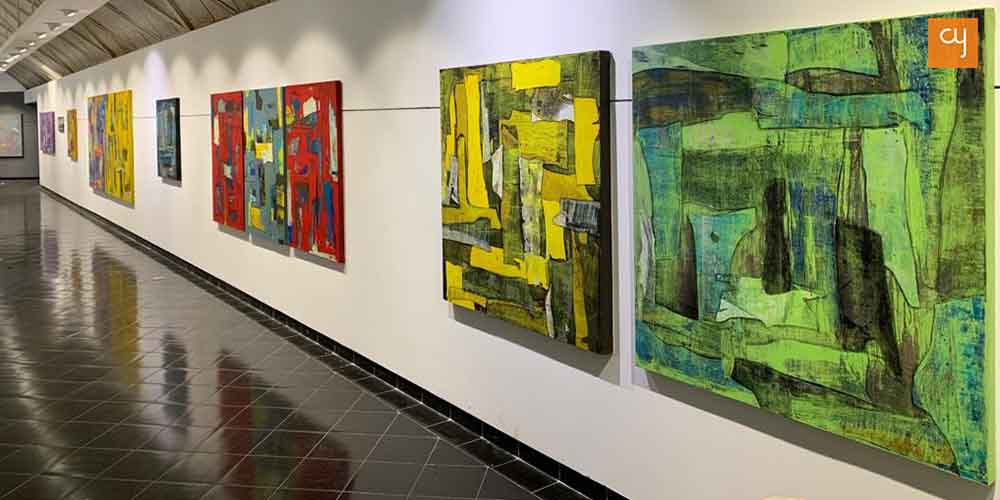 No wonder the show says “Divergent Individuals” ab initio! But that we would say is a positive of the two-in-one show as you get to see two worlds of the two artists who live under the same roof and yet think and express so differently. A good show by the lovely made-for-each-other duo; this is on till next Sunday between 4 pm and 8 pm.