It’s Trilok Soni and his Pichhwai one more time

Trilok Soni is a Rajasthani artist who returns to Ahmedabad with his Pichhwai art every now and then. In fact, he claims Ahmedabad is the only place where he puts up his shows at his own initiative and expense; and the place also serves as a hub for his networking needs relating to his art. And he goes to other places only on an invitation!

Be that as it may, it should be seen as an opportunity that Soni is back in town and has been showing 26-odd works in Pichhwai again at Amdavad ni Gufa since Tuesday. 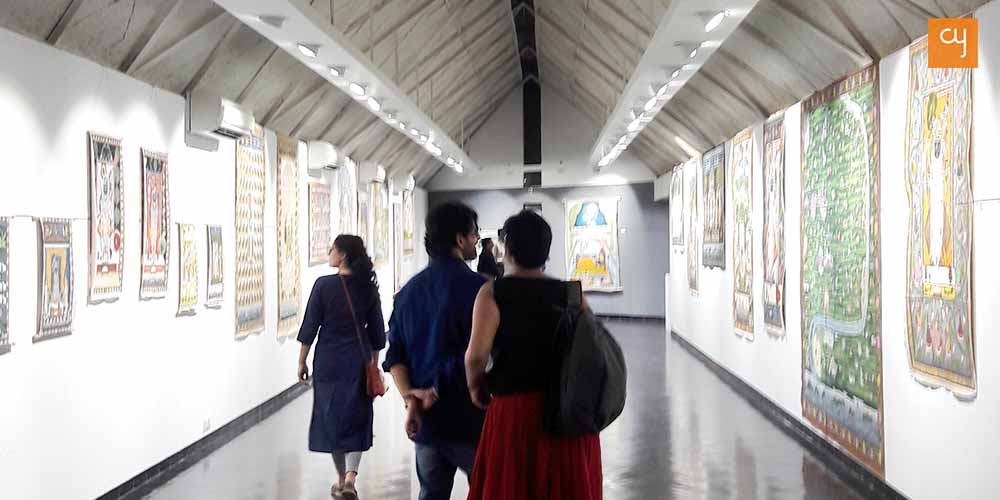 Pichhwai for the uninitiated is a form focused on Shreenath ji of Nathdwara Temple and the works are considered a depiction of both obeisance and aesthetics ever since their first inception some three centuries ago after the Nathdwara temple was founded in what we know as the Mewar region. It is also considered that the art form also had its origin in the Deccan schools, more or less concurrently. The works started as decorative hangings placed on the back of Shreenathji idol in the Nathdwara temple and acquired the name Pichh+wai (backside + hanging). These have usually been done and exhibited as scrolls of cloth with natural colours prepared by the artists from raw materials like coal, zinc, indigo and saffron sourced by them directly and kept fresh for the limited time while a certain work or project is in progress, besides the use of gold and silver leaf for embellishment and adding value. Later evolution possibly includes the works appearing on khadi paper and even the use of acrylic colours.

The present show by Soni includes works titled as Twenty four Darshans of Shreenath ji, Virat Darshan of Shreenath ji, Gopashtmi, Shreenath ji in Raas Leela, Vraj Parikrama, Sandhya Aarti and so on, which are self-explanatory for their content. Many of these works have been embellished with gold leaf besides the staple colours used for Pichhwai and present an exquisite appeal for their use of the ornamental element.

Works around Gopashtmi are fascinating in detail as they portray the herds of the quintessential cow from the Braj tradition and beautifully carved herdsmen who flaunt either a flute or a stick both used to keep the herd together! Similarly, the work titled 24 Darshans is mesmerising as it creates 24 distinctive forms of Shreenath ji which vary from each other in small elements but retain a core of the Lord’s form. Ask the artist as to how and where these twenty-four forms have been defined in distinction and he says they now use computerised pictures from the past to retain and recreate the variety in repetitive works overtime as demand keeps coming from clients. Instinct also plays a role here, says Soni as he alludes this to the generations of the Pichhwai artists who pick up their skills in Guru-shishya tradition mostly in Nathdwara. 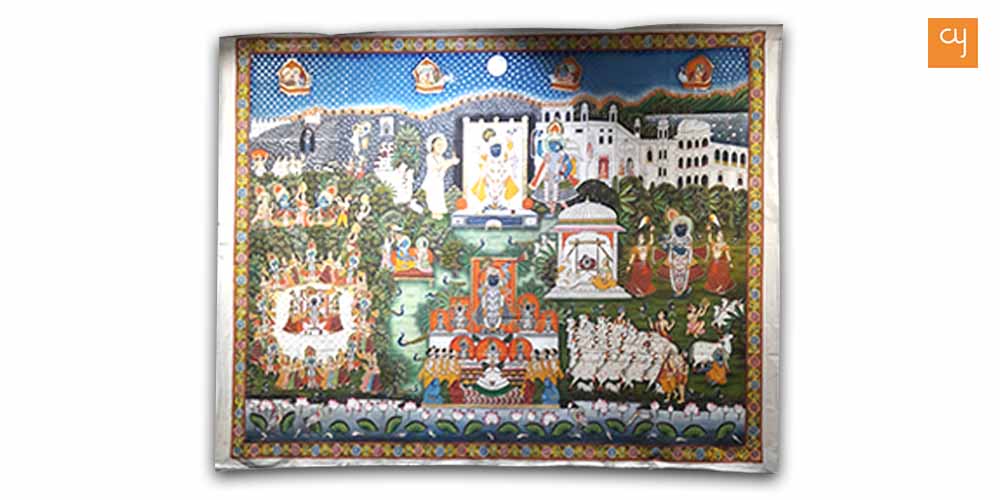 There are also two works in the collection on show on themes and subjects other than pertaining to Shreenath ji; the first of these works depicts the mood of family love and leisure with a reclining Lord Ganesh attended on by wives Riddhi and Siddhi while offspring Shubh and Labh play around as toddlers! The other work is based on Jain pantheon and portrays Mata Trishala visualizing the legendary fourteen dreams in her serene slumber while her composure and form is a sight to be seen. These works are done in excellent artistry and radiate with affection, serenity and wisdom; and also thereby create a soothing effect in melancholy reflection and joy for the beholder. 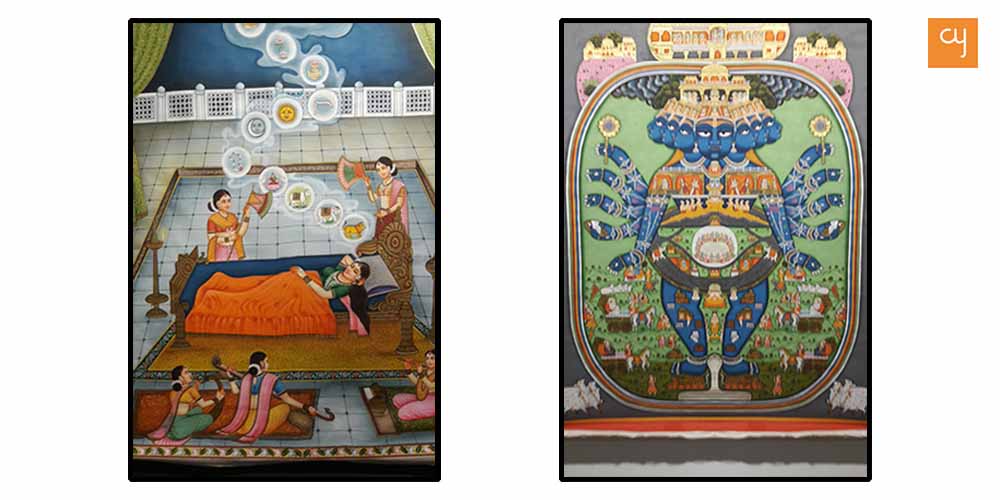 The same spiritual and aesthetic joy can be experienced in the familiar sights, anecdotes and themes that surround Shreenath ji in the rest of the exhibits which are the mainstay of themes and range in size from a mere 18 inches by 12 inches to a giant 78 inches by 72 inches.

Entertaining, educative and enlightening this show provides a window to a tradition that’s endangered in some ways but is being truthfully maintained by artist families of Sharmas of the Chitrakaron ki Gali in Nathdwara and others like Trilok Soni from Bhilwara in Rajasthan. Soni’s original works in the show start at Rs.20,000 for a small one and go to a maximum of Rs.250,000 for the biggest like the Parikrama work. The show is worth the trip-time one would spend and is on till Sunday, October 20.