Gandhi in Folk Forms is a Hit

That Mahatma Gandhi evokes mixed emotions of surprise, awe, disbelief, even sarcasm in some cases, on some of his actions, stances and values as people down the time judge him with the benefit of hindsight as also the common criticality handed down by our times, is a given now. And yet for most, he is described and summed up by that Einsteinian quote coming on the occasion of Mahatma Gandhi’s 70th birthday: “Generations to come, it may well be, will scarce believe that such a man as this one ever in flesh and blood walked upon this Earth.”

No wonder in the 150th year of his birth in 1869, he continues to inspire the nation’s commoners for his core values, if not the real polity which tends to be full of deceit, indulges in shrill discourse of one-up-manship, is far removed from the objective to truly serve people; and relies on even violent means for electoral gains. The one value of the Mahatma that the official establishment and commoners both seem to have decided to emulate in unison is about cleanliness, as we tend to make it our mission, even if in some degrees of success to coincide with his upcoming anniversary. 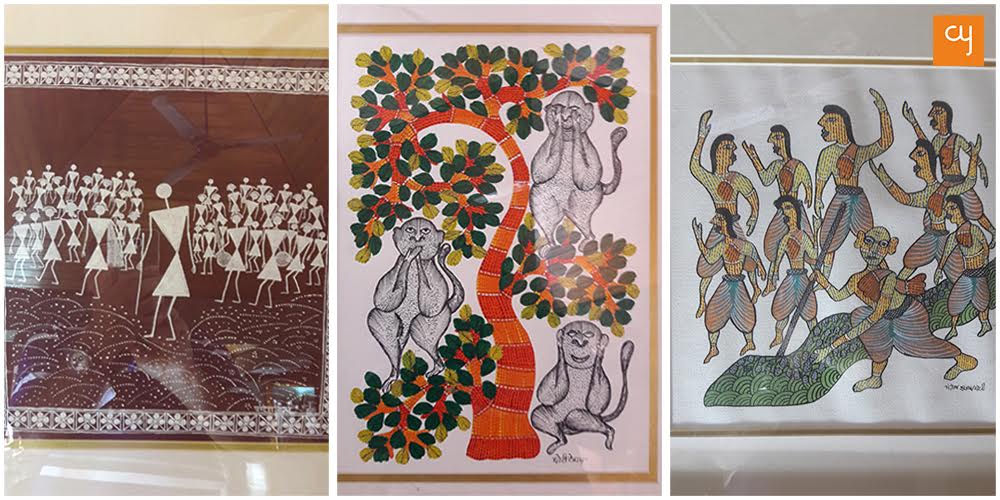 The artists of all shades have expressed themselves and related to Gandhi in many ways over time since his assassination in 1948. No wonder we keep seeing exhibitions by some of the artists in our region who do not fail to bring out more of their works dedicated to the legend every year. Sabarmati Ashram was the venue of one national exhibition of art on and about Gandhi this current week. Coming at the initiative of Export-Import Bank of India (The Exim Bank), this exhibition was commissioned by them with the artists of tribal, folk and indigenous forms of arts spread throughout the country and was opened at the Ashram, which was home to Gandhi from 1917 onwards.

Using forms like Madhubani of Bihar-Nepal, Sanjhi of Mathura, Patua of West Medinipur, Bengal, Gond of MP-Chhattisgarh, Papier Machie of Kashmir et al about a dozen artists were commissioned by the Bank to create about 25 works. The first of these commissioned works, this show opened at the Sabarmati Ashram on Saturday, 9th March while as it was formally inaugurated on Monday March 11 by a Joint Secretary of the GOI in the presence of Exim Bank’s officials both from Mumbai and Ahmedabad and some invited artists and others.

The artists obviously draw on the important milestones and turning points in the life of Mahatma as he evolved from The Man to The Mahatma. So we see Mamta Devi portray Gandhi in conversation with his audiences in Champaran in two of her works in Madhubani style, a form considered 2500 years old, and Ramant Kumar depicts his last journey in the same style. Move to the adjoining Medinipur in West Bengal and we have Mamani Chitrakar who has done the most famous episode about Gandhi being thrown off the first class coach of the train he travelled in Pretoria in 1893, which proved to be his genesis. Go further north-east to Kamrup, Assam and you have Santashri Malik Bhuyan who has done the familiar Gandhi with His Charkha but in the exotic handloom weaves in Gold threads on while cloth.

We have Vijay Kumar Varma depict Gandhi with his Charkha again to eventually portray the significance of village economy through Sanjhi, the art form rooted to Mathura and even parts like Alwar in Rajasthan where the practitioner Ram Soni lives. Soni has put up three works titled Father of the Nation, Prakash Punj and Gandhi & Tagore in the same form, which comprises of cutting out paper channels to portray figures and shapes on the main paper. The Gond form of painting is represented by Chhoti Tekam of Koltra Sultanabad as she draws the famous Three Monkeys while Santosh Shyam of Dindori in MP draws four works titled Prabhat Feri (the early morning trip with chants), Salt Satyagrah, Champaran and the Three Monkeys again. His Prabhat Feri and Monkeys make some fascinating studies of the Gond form with intricate details. 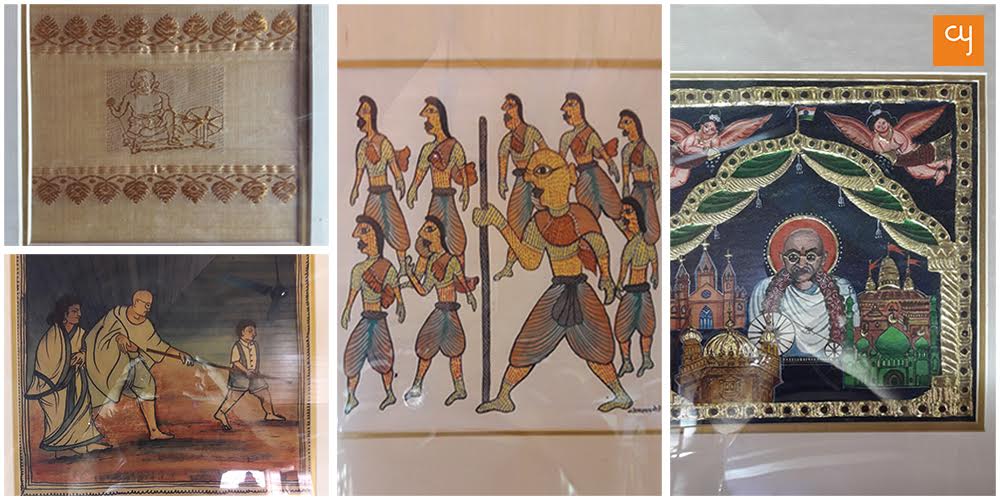 Go up north and we have the art form of papier machie that finds its origins in 14th century Kashmir. Nazir Ahmed paints a Charkha again in the hands of Gandhi and also does a Ba and Bapu, to give Ba some representation here!

The show also has artists like Amdavadi Akshay and Dilip Dantani who have drawn Gandhi’s Dandi March using the form of Mata ni Pachhedi followed by others like Natalia of Bhilwara in Fad style and then works in Tanjore style of Tanjavur, Kalamkari of Andhra Pradesh, the very fascinating Warli painting by Dahanu based Sandesh Chintu and Pattachitra of Odisha. This last form has the biggest work of the lot and it depicts Gandhi at The Round Table of 1931 in London; where he famously shocked and then won over the gatherings first by his simple ethnic dhoti and the wrap – which were rather scant for a London winter – and then by his witty one-liners!

The good thing is that the works are accompanied by a narration highlighting the characteristics of the origin and style of the art forms deployed by the artists of the series, some of which are just mesmerizing for the minutiae and detail. The patrons Exim bank deserve a word of praise for commissioning or supporting the imaginative show. But the bad thing is the show was here only for a week and comes to an end on Saturday unless it is extended for its relevance. One also hopes this travels to other places for its appeal. Open on Saturday up to 6.30 pm in the evening in line with the Ashram Timings.