In this biographical play, actor Pratik Gandhi portrays one of Gujarat’s boldest authors, Chandrakant Bakshi. Much like a squirrel that runs on barbwire scrupulously yet swiftly, Gandhi’s performance is cautious yet fearless. 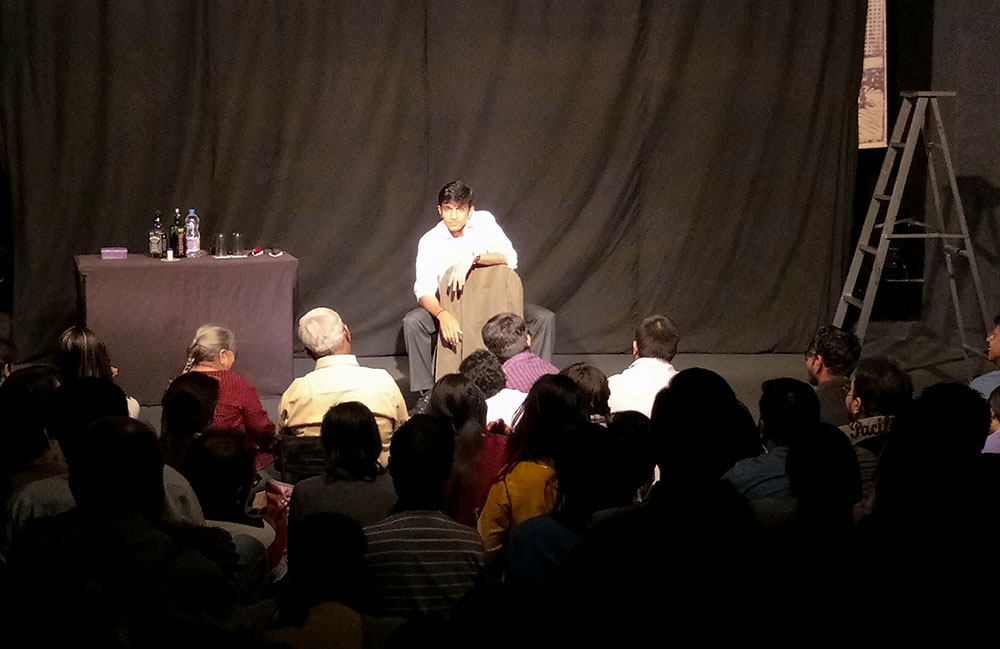 The intimate theatre space of Ouroboros Art Hub had audience members– right from the regular Joes to the Who’s Who of the art fraternity– brushing shoulders with one another on February 17. Like in cosy, domestically arranged talk shows, nobody complained, however, about the jam-packed Blackbox Theatre. They were keen, instead, on experiencing the rousing monologue of Hun Chandrakant Bakshi, a play based on the famous Gujarati author Chandrakant Bakshi. And Pratik Gandhi’s performance ensured that audiences were spellbound till the end.

Minutes into the show, I was gripped by the actor’s performance. He seemed to embody the persona of Chandrakant Bakshi so adroitly that, after 60 minutes, I no longer saw him as the talented theatre artist who has previously wowed us with his portrayal of Mohandas Gandhi in Mohan No Masalo, or as the man who was Krishna in Bohot Nachyo Gopal. Pratik Gandhi’s multi-layered onstage presence, cultivated over a decade of practice now, has also garnered for him prominence today in commercially successful Gujarati films like Bey Yaar and the National Award winning Wrong Side Raju. It was breath-taking to see him enact so exceptionally his role as an agitated, belligerent and regal Bakshi, from the start to the end of the show. I would go so far as to claim that his artistry deserves a significant national recognition, perhaps a Sangeet Natak Akademi Puraskar.

The play spans anecdotes from across Bakshi’s life, right from his birth in Palanpur to his education in Arts in a wealthy Jain family that resided in Calcutta. It traces his work as a columnist, educator and writer in Mumbai to the controversies revolving around his short story Kutti. It also closely zooms in on the demise of his beloved wife Bakula and his later appointment as the Sheriff of Mumbai. The audience seemed to dearly connect with ‘Bakshibabu’s’ socialist thoughts expressed in the play. Whenever Bakshi (Gandhi), in the play, elaborates on his extraordinary works of literature, like his epic novel Paralysis or Mahajati Gujarati, he climbs a ladder and stays elevated there throughout the entire monologue. 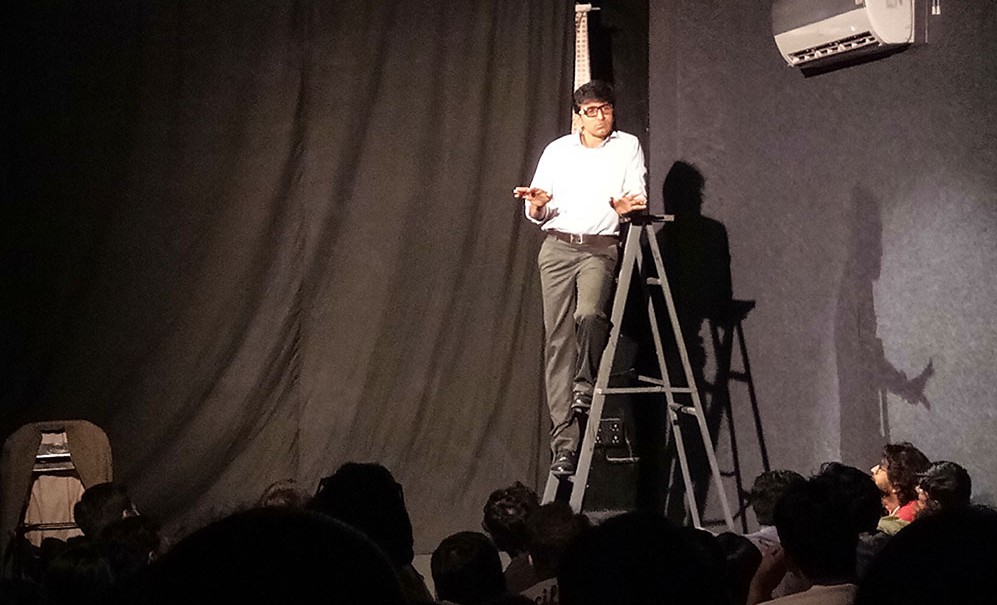 A believer in the power of the ‘first draft’, Bakshi never wrote more than a single draft on a particular topic. As a progressive writer who wanted to transform how Gujarati literature has been perceived so far, he drafted more than 178 books in total. Bakshi could induce powerful emotions in the mind of a reader just through his words. If he wanted to narrate a horrific or violent sequence in a book, he ensured that the writing leaves his readers scarred for life. Once, a daily refused to publish a quote where Bakshi mentioned urinating on the corpse of his enemy. He tried to jolt into awakening those who have authority over Gujarati literature, towards fresher perspectives, and to expose readers to a genre that brings a thrill to them, stimulates them, horrifies them and seduces them, all at the same time. Bakshi’s pet phrase “It’s a lark, majja padi gai” was felt by the audience throughout the play. His comparison of the word “Ahankar” (Pride) with the religious phrase of “Omkar” portrayed his egoist persona and audacity.

Manoj Shah, who has been a leading figure in the drama industry and the founder of the theatre company Ideas Unlimited, is the Director behind this 90-minute one-act play, which has been in theatres since 2013. The play is written in the form of a life story narration, by playwright Shishir Ramavat, and the witty dialogues create a contemporary context. When the character of Bakshi casually mentions the latest Punjab National Bank fraud of Nirav Modi, and mocks Director Manoj Shah’s ‘wretched’ attempts to create a play on a strong personality like him, the narrative takes on a humorous appeal. The dialogues are stirring, and their style of delivery is spontaneous too. Ojas Bhatt’s stirring music emerges at precise points as the plot progresses, and lighting effects on the dark stage frequently exaggerate the poignant moments in Bakshi’s life. Being a solo act, these subtle changes in effects heighten the overall feeling of the show, bringing visual novelty to it. I did hope, though, for more opportunities in the plot where the artist could directly engage with the audience.

The dates for the next show aren’t revealed yet, but I would strongly recommend the play Hun Chandrakant Bakshi as an experience that every man and woman should consume first-hand. I can confidently say that if the collaboration between Manoj Shah and Pratik Gandhi continues, it will create wonders in Gujarati experimental theatre.