Pythagoras addresses an educational problem in a refreshing style 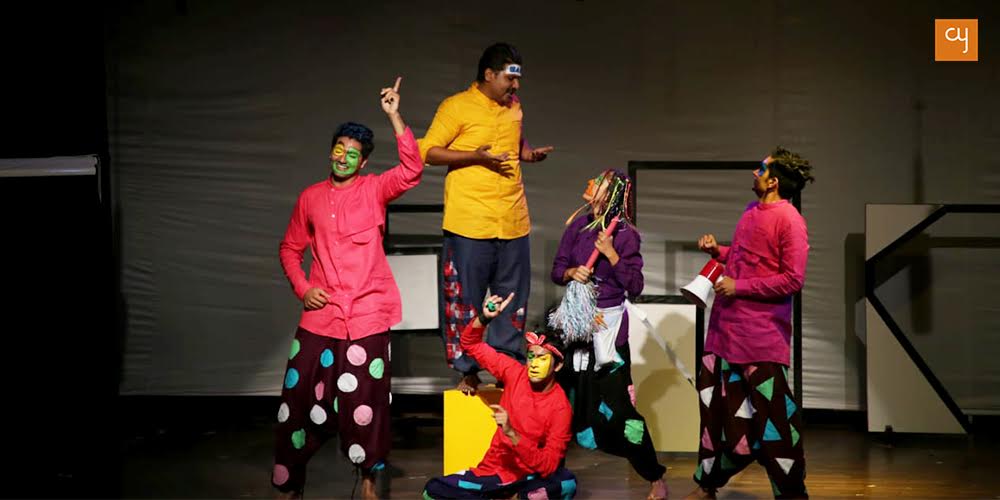 Pythagoras, which was staged on Sunday as the concluding performance of over a two-week long ‘summer festival’ of arts in Ahmedabad Abhivyakti Edition Two to a nearly packed Dinesh Hall despite distractions in a refreshing style is reassuringly indicative of the daring turn Gujarati theater of late has been taking. The play has an original script in Hindi smartly developed by Ankit Gor, who has directed it with eight actors who are all but one Gujaratis. He had, incidentally, been the curator of all theatre performances of the festival.

The seventy-five-minute play has a serious take on education. The ill-conceived system and inadvisable parental pressure have reduced a child’s education to a kill-joy mechanical activity. Where it delighted, even verbally, the audience laughed and clapped. Most of the time however they listened to the central argument against the system with the subject of Mathematics as the metaphor, in such silence you could have heard a pin drop, as they say. The music (Aakash) and the lights (Anahita) enhance the alternating moods and the props get integral to the dramatic happenings. 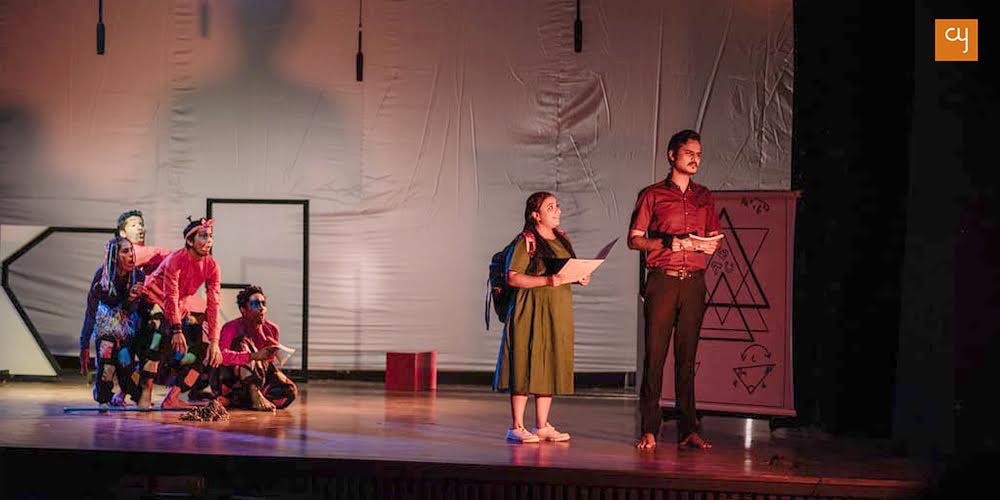 The teenage school girl’s father is obsessed with her studies, studies he considers important. Her name paradoxically is Bhoomiti and she has no liking for Mathematics. He is hell-bent on having her score good marks in the subject. Study, prepare for exams, be a good girl – no khel-kood, no stories, not even remotely dreamy diversions. No questions : ‘Do what I say.’ The poor girl is always seen laden with books and Pythagoras. Saumya’s body language and her expressions keep reminding the viewer of her suffocation, her resentment, her instinctive playfulness. As for her father Prakash, a subtle hint is given pretty initially that he loves straight lines and dislikes curves.

The jokers (Navid, Animesh, Ravi, Namrata) entertain and enlighten. They play with Bhumiti and have from time to time a digs at Prakash, played by Prateek with stiff uprightness and speech, and interact with the viewers on a serious subject with wisdom proverbially associated with clowns. One of the Jokers, the omnipresent Bada Bhai enters (Ankit Gor) into an argument with the father. He stresses importance of a growing child’s emotional side. Interesting overtones develop. The three sides of a triangle grow in connotation. The father had grown dominant egoistically pushing the mother, Kiran, into a corner tongue-tied. Aditi as a dignified Kiran now tells her daughter : Like Karna, a triangle side as also of the Mahabharat, you be the architect of your destiny! 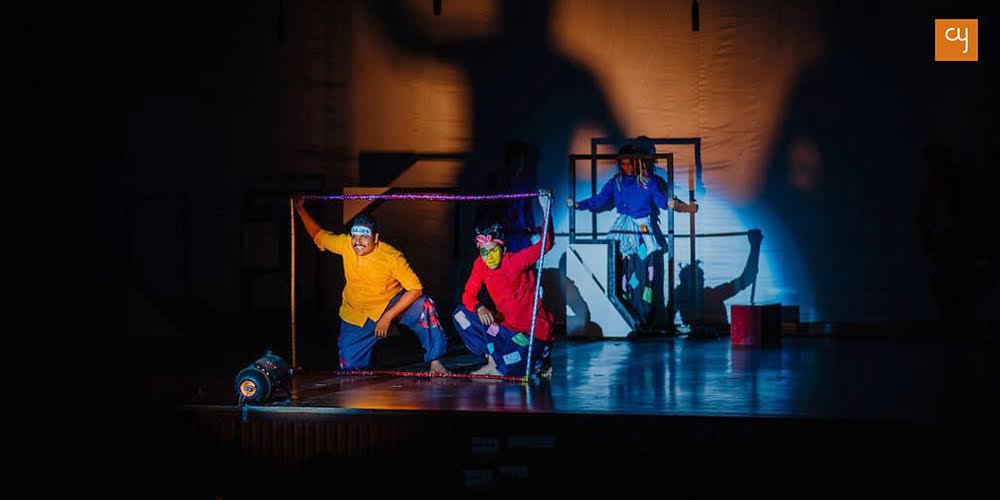 Prakash’s obsession with lines, Kiran points out to daughter Bhumiti towards the end, drove him to near mental sickness. In their marital journey she seemed waylaid. This can also be interpreted as the softer side of life, the one associated with the heart and love, even more important than a single-minded dry pursuit prompted by the head in life, if sidelined, would lead to disastrous consequences. With images drawn from Geometry this is brought home to viewers.