Known for its refreshingly original content created by young artists of Ahmedabad, ‘Abhivyakti’, is coming out with its second edition on April 26. Here’s a peek into the art and performances that will be showcased at the 17-day-long festival. 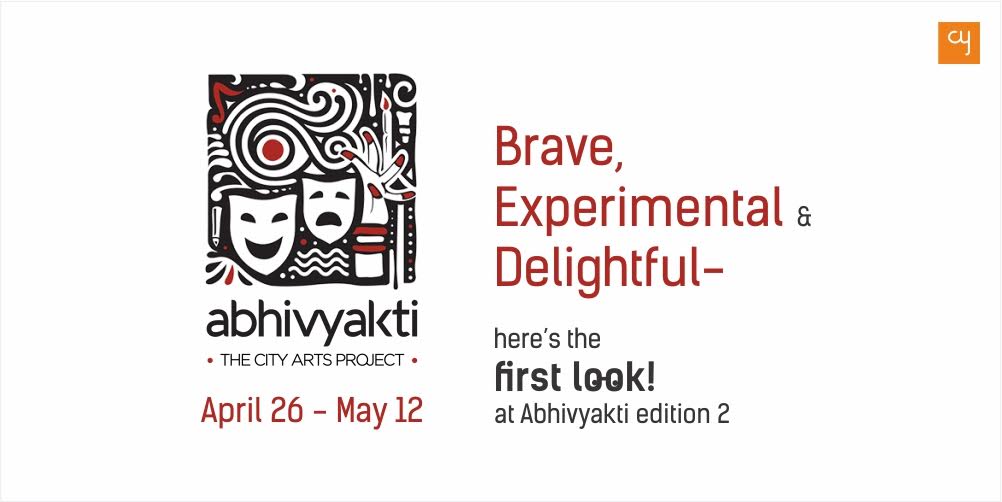 Many artistic activities in Ahmedabad remain out of reach for the common (wo)man of the city. But in 2018 came Abhivyakti – City Arts Project, a festival that changed this notion by creating a ‘by the city, for the city, of the city’ arts festival. Spread across the four main faculties of creativity – Dance, Theatre, Music and Visual Arts – Abhivyakti, in its first edition, made itself accessible to every citizen of the city. It hosted 4 stage performances, 13 visual art exhibits and 4 musical shows spread across 30 consecutive days at the Sanskar Kendra. Each performance was staged multiple times, thereby offering opportunities for many people to connect with them. Young local talent also received a much-deserved platform to showcase their skills in front of their own city.

Last year, apart from the young artists who participated, some reputed names also contributed to the ongoings. Respected artists like theatre artist Sunil Shanbag, danseuse Sanjukta Wagh and Vaibhav Arekar graced Abhivyakti with their performances last year. The event was mentored by segment experts under the guidance of landscape architect Aniket Bhagwat.

The event is an initiative by UNM Foundation and is founded on the values of patronage and charity. The cultural fest aims to touch maximum lives from across socio-economic strata and break the myth that creativity and the arts are only meant for the privileged in society. It also envisions initiating citizens into critical thinking by establishing the arts as a medium for socio-political expression. The foundation ensures top of the line production so that the performances and viewer experience are heightened.

Abhivyakti is back again this year with its second edition, which will start on April 26. In its second season, Amdavadis can expect a multi-sensory experience for 17 days with several enriching performances. The curators play a significant role in the way Abhivyakti functions. And it is through them that the festival achieves its objectives. This years curators are a bunch of young artists, who have the penchant to think out-of-the-box as well as they carry an understanding of the city’s creative landscape. They are Mitul Kajaria (Arts), Ankit Gor (Theatre), Akash Bhatt (Music) and Pooja Purohit (Dance). They worked for almost a year to unearth unique talent from the city and lead them towards the final showcase. Let’s take a look at the young artists who have made it to the final list of performers of this year, after the arduous curatorial process. 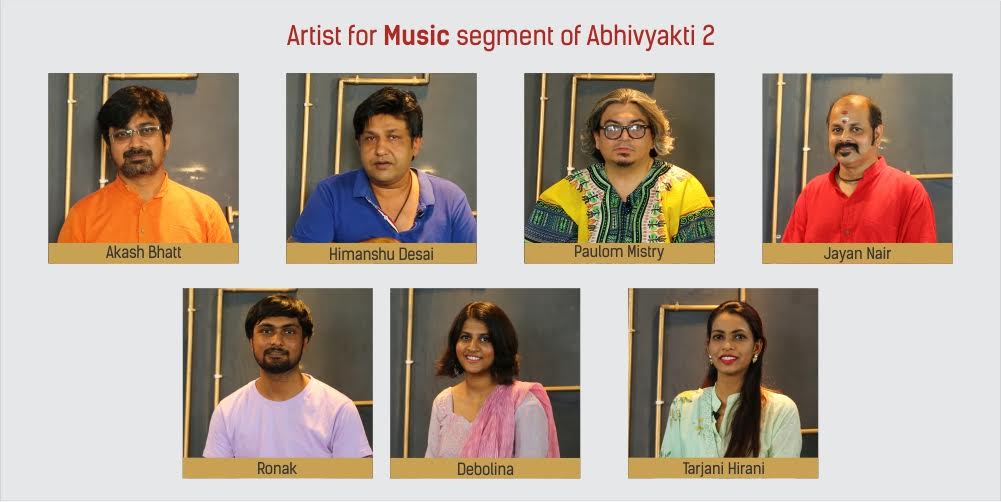 Musical acts at Abhivyakti 2 are imbibed with an element of surprise, through an eclectic mix of folk and contemporary sounds. Paulom Mistry, with his piece In Search of Sonic Identity, and Tarjani Hirani, with her Deja Vu piece, will be experimenting with contemporary tunes and genres. Jayan Nair is creating a rhythmic fusion between Nandan Pat, a folk song from Kerala, and the Gujarati Dayro. Himanshu Desai, who spent a long time discovering The Neelkanth Tuning with his guitar while staying in Varanasi, will be sharing his soulful original compositions. Architect and musician Akash Bhatt will introduce fresh sounds into traditional Gujarati folk music through ‘Roots Branches’. Who knows, perhaps he might end up discovering the next step in the evolution of Gujarati folk! 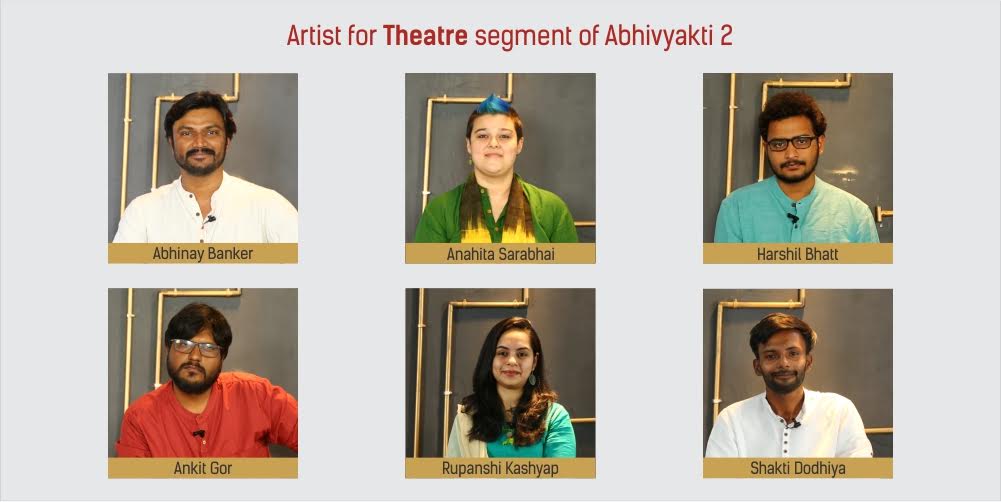 Experimentation is the key word to describe the theatrical pieces that are lined up at Abhivyakti Edition 2. The performances include original work from Anahita Sarabhai, Ankit Gor, Harshil Bhatt, Abhinay Banker, Shakti Dodiya and Rupanshi Kashyap. Each act is set to experiment with the form and vocabulary of theatre and has the undercurrent of a social message embedded within its narrative. For instance, Ankit Gor’s Pythagoras explores the unrealistic expectations set by parents on their wards, while Harshil Bhatt revisits tragedy through the story of a sound artist who turns deaf.

Popular among the city’s theatre circle, actor and director Abhinay Banker will be going all out to challenge his actors by asking them to get on stage without a script. His method involves letting each artist focus on understanding his/her co-actor’s character, so they can respond accordingly, thus creating a dynamic air of unexpectedness on stage. Sarabhai’s piece is a reflection on the power of context over character. Shakti Dodiya will deliver political commentary through a satirical piece, while Rupanshi Kashyap will touch on the bygone Guru-Shishya Parampara (student-teacher tradition) through a story of Sufi saint Nizamuddin Auliya and Sufi musician Amir Khusro.

Touching upon diverse genres, this segment will give viewers the chance to appreciate lesser-known dance forms and gain a new perspective on them. Harshal Vyas will employ contemporary dance and use the metaphor of a ‘Kite’ to express the vagaries of human conflict. Deepak Sharma and Mansi Gandhi are performing a novel street dance titled Tinge of Actuality. Tilak Kori and Sonal Solanki will showcase a mix of folk dance forms ranging from the ever popular ‘raas-garba’ to rare dances from the Bhil and Dang folk traditions. The segment also has a piece from veteran Vaishali Trivedi, a popular Kathak teacher in the city. Her recital Still Water is a commentary on contemporary times, through which she envisions influencing viewers towards affirmative action.

The selected list of participants from the field of visual arts will soon be revealed by the organisers. Till then, let’s await the opening of the city’s most anticipated art project, on April 26. One significant difference in this year’s format is that the events will take place simultaneously at two venues, on either bank of the Sabarmati river. One venue is the renovated Dinesh Hall on Ashram Road and the other is the Bhavan’s Auditorium on the campus of Bhavan’s College of Arts & Commerce. The three-week-long arts festival will end on May 12, 2019, and will have two performances at each venue on every day except Mondays.

Team CY shall be bringing you all the updates about the festival as it happens. Stay tuned to #CYatAbhivyakti2 for all updates and news feed from Abhivyakti edition 2.