A show ends and a show begins: The Lucky 13 and Vaishali Panchal

While this continuity for the shows is a given in Ahmedabad, what is remarkable to record alongside is that the haunting memories and love for the alma mater and batch-mates can be the driver for not only reunions full of fun-frolic and masti, but it can also be the cause of constructive tributes and projects for the institution, remembrance for the gurus and of course an opportunity for picking up the lost threads with fellows from the time gone by decades ago! This collective or personal sense of love and gratitude at work can thus bring meaningful facilities or utilities for the new alumni on the way forward! 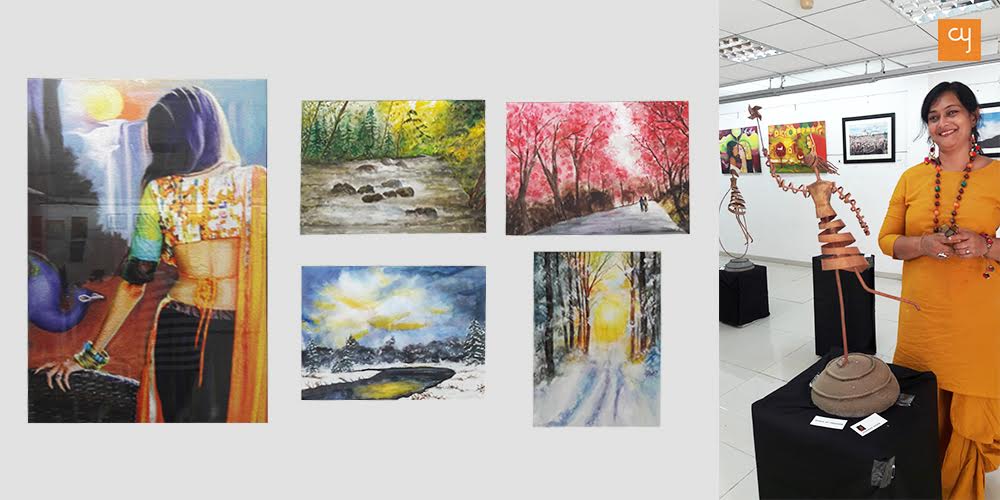 The show by the “lucky thirteen” a past batch of pass outs of mid-1990s from C N College of Fine Arts, Ahmedabad was one such event that started on May 10 and came to an end on Tuesday, May 14. The participants of the group show came not only from all over the state of Gujarat but also from outside, viz Bengaluru in India, while two artists sent their works from as far as Muscat-Oman and Canada! Those who could join personally knew no bounds to their joy as they met each other after 23 years or thereabouts, as was visible from the reaction of Chandani Nayak, a sculptor.

The show had a lot of variety to offer in terms of media besides putting on display some artworks by the gurus of the lot of thirteen in that era namely Nagji Prajapati, Natubhai Parikh and some others.

Dipika Patel from Bengaluru presented the colourful series of five works called “Theppa 1 to 5” which portrayed the typical bamboo boats created out of the imagery carried back by her from a visit to Tamilnadu’s regions on the banks of famous river Cauvery. The boats can be carried by the boatmen on shoulders for their lightweight and the works seemed to capture that dimension. 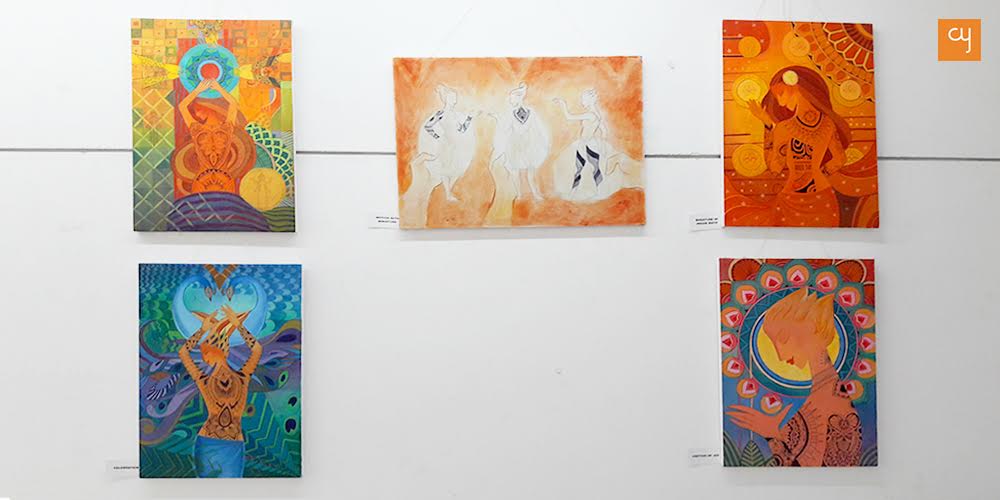 Heena Kothary of Muscat also contributed five works titled “Identity 1 to 5” that went in the class of portraiture. In fact five was the number of works prescribed for everyone and this was adhered to as we saw that in the fascinating landscapes of Nilam Patel who sent them over from Canada; in the works depicting tattoos on female forms by Sandip Kalambe, in the photos of mountainous and snow-clad Kailash Mansarovar by Vaishali Patel and so also with others.

Chandani Nayak had put up some interesting sculptures in copper while Vikram Patel had displayed exciting works in the digital category titled Eternal Beauty, Beauty with Light, Beauty with Sunrise and Meghadoot, all works detailing the feminine grace in various interpretations. Others who showed their works at this Reunion Group Show included Seema Singh, Hitesh Panchal, Jayesh Parmar, Nilesh Suthar, Rakesh Nayak and Vipul Raval. 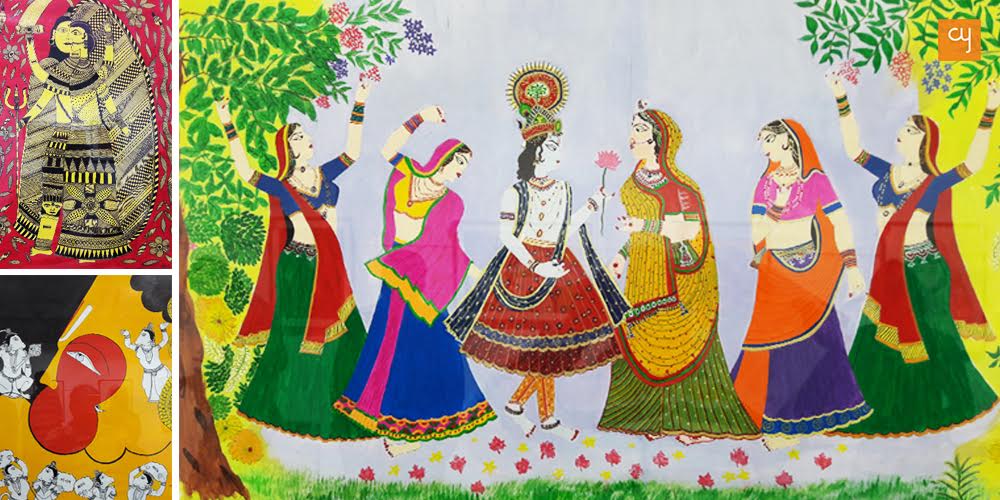 While The Show at Ravishankar Raval Kala Bhawan ended on Tuesday, a solo show by homemaker-turned-artist Varsha Panchal started at Amdavad ni Gufa, interestingly in her absence to faraway Germany. Supported by Filter Concept Group, the show was managed by Varsha’s artist daughter Kajal Panchal and was inaugurated by art connoisseur Sunita Love Girdharilal and artist-art teacher Manhar Kapadia. Identified with and presented by aanandii.com, the website of the artist and her daughter, it’s a simple yet interesting show of acrylic works on paper or ink drawings on paper on themes of devotion, art, ecology and women in their many moods and disarming charms.

First and foremost Panchal, who signs her works as Varsha M, where M denotes her father’s name, has invoked Gods beginning with Ganesh and going on to Hanuman, Saraswati, Lord Krishna as Shrinath and Lord Shiva. She also captures in intricate detail the Ardha-Narishwar form of Lord Shiva. Even Lord Vishwakarma considered the creator of Universe and master of all trades and tools, architectural science, men and machines in India is portrayed in an interesting work showing tradesman drawing their energy and inspiration from the deity. 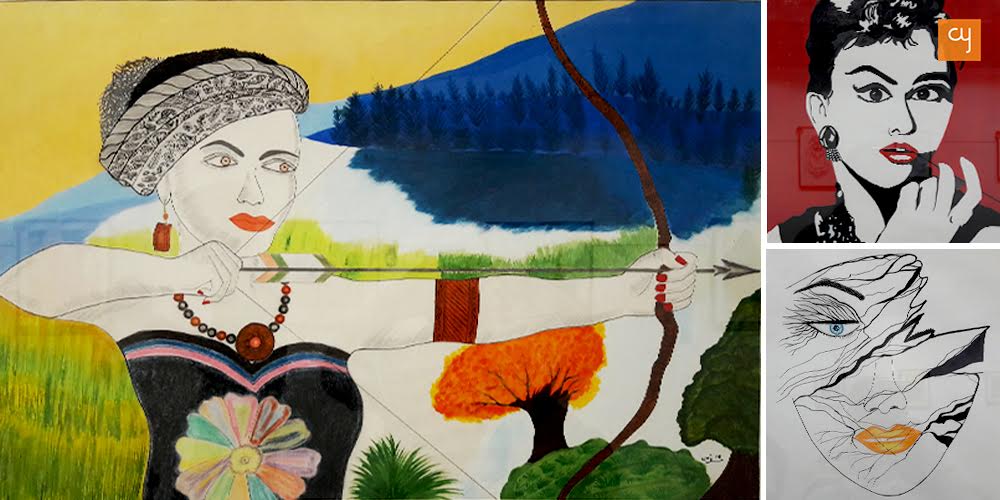 But when Panchal does turn to painting her own ilk, she also brings out the subtly sensuous side in what curators would tend to call and see as simple expressions of ordinary sensibilities relating to the fair sex. Whether in acrylic paintings or in ink drawings, Panchal has acquitted herself well in dealing with her own Nayikas. They are captured for once as a traditional bride contextualised with the marital rites by the priest before the holy fire and ending with saptpadi, the seven vows on one end and as socialites carrying themselves with glam and grace on the other end. Some of these works about women make interesting studies.

Panchal also shows through a couple of drawings her concern for the worsening equation between man, mother earth and the environment; as also her love for the performance tradition by having worked on Kathakali artists. Two of her portraits on these artists capture the details of the rich make-up that we know is applied to these artists before their performances on stage. Works like the stylised depiction of Lord Hanuman at the site of Ramsetu, of Shrinathji with ornamentation & embellishments and the Woman with the Arrow, are especially expressive and eye-catching

A show that does not fail to engross you for its religiosity, romance and rigour, this one is on till Sunday, May 19 between 4 and 8 pm at the Gufa. And the works are extremely affordable if you happen to like some of them for your baithak or study.