Young actors of Gujarati theatre led by Ankit Gor and Gaurang Anand in Children of Karnad, a reading performance in Hindi held at Studio One Third last Thursday, got the audience to know the significance of Girish Karnad (1938-2019) as a playwright. In the scenes they selected from four of his plays, as in nearly all, his originality is felt in infusing insights into the plot borrowed from our rich legacy of folk tales, myths and history (elsewhere he has borrowed from our epics as well) that resonate with the life as it is lived today.

Karnad is visually strong in Rakt Kalyan (Tale Danda), Tughlaq, Flowers and Naagamandala, as in other plays, in a complex dramatic mode that grips attention with the portrayal of emotions with an undercurrent of conflict. The dramatic mode involves dialogue, and the words in it with the images they produce, carry sense that echoes wisdom across time and place. We get a glimmering affirmation why it is said kavyeshu natakam ramyam. Poetry, according to Indian aesthetics, combines sound and sense. In drama, as in poetry, words do not entertain at a popular level. They sensitize, surprise and elevate the viewer.

Rakta Kalyan (1990) puts the issue of caste in the historical and cultural perspective. Basavanna was an important historical person born like Kabir and Nanak in the Bhakti movement at the lowest rung of social hierarchy who attempted radical social reforms like inter-caste marriage, equality of sexes and removal of idolatry and birth-related rights. The proposed marriage of a Brahmin girl with a boy in an untouchable family so called has the peaceful town of Kalyan plunge into a bloody turmoil. Karnad has a telling message to our society that if does not change with the changing time it is doomed. Powers that be in it need to help it evolve gradually and not retard its natural growth. 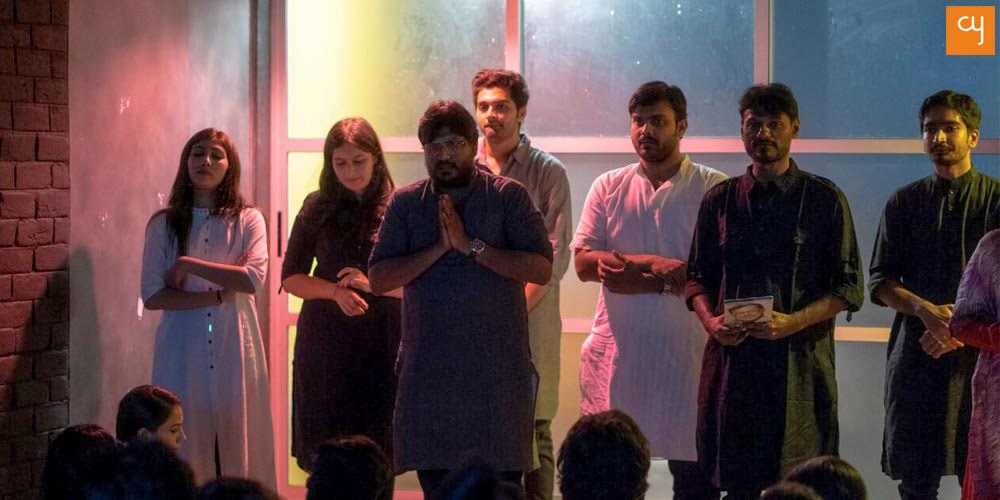 The Sultan who wished to gallop and not crawl with his desire to build an empire of his dream in Tughlaq (1964), moves his capital to Daulatabad, a city with a dominant Hindu population and strengthen the bond between Muslims and Hindus. An enigmatic man of quick decision and action, in solemn and tense ambience, with Allahu Akabar heard in the background, Shihabuddin makes an attempt on his life while he is in prayer. He completes his prayer, rises and cold-bloodedly stabs Shihab. His anguished words to historian Barani are: Are all those I trust condemned to go down in history as traitors? Topicality and drama are cornerstones of Karnad’s stagecraft.

A playwright with a highly cultivated sensibility and a sensitive antenna of exploratory curiosity, Karnad surprised readers/viewers with freshness in every play he wrote. His Flowers (2012) is a monodrama in which both poetically and philosophically he presents a temple priest who adorns Lord Shiva’s Lingam, the phallic symbol Hindus worship. This daily religious practice turns erotic when with the same devoutness he decorates past midnight the nude body of Chandravati, a beautiful Ganika, with the flowers removed from the Lingam. A third dimension to the happenings is the priest’s wife with a sense of duty waiting every night with the dinner ready for him. The end leaves the priest in a dilemma and remorse for the two women who love him.

With its flitting glimpses of life and lyrical possibilities of interpretation, in Naagamandala (1988), Karnad is a prose poet portraying the ‘universally shared desire’: ‘Frogs croaking in pelting rains, tortoises singing soundlessly…’ ‘The female begins to smell like the wet earth. Stung by her smell, the Cobra starts searching for his Queen, the tiger roars for his mate. When the flame-of-forest blossoms into a fountain of red and the earth cracks open… It is there and there and there, everywhere!’ The giggling Flames know it. The Cobra has tasted the magic powder and takes on human form and passion.

Tinkling anklets turn Rupanshi into Rani, ‘Queen of the whole world’ and King Cobra (with Aditi and Netri as giggling Flames, Nikita as a well-articulated Story and Animesh as Aadmi in support). Adding dramatic skills as well to her portrayals through Kathak, she transports the viewers through Karnad’s wizardry to a world where the mysteries of life unravel. The tiny piece should prompt Anti-clock to produce a full-length Naagamandala.

The young actors – Harsh, Ravi and Amar have not been mentioned above – successfully introduced Girish Karnad as the playwright. There are over a dozen plays yet, all different in their style and themes. The strength of their voice gave a taste of characters like Tughlaq and Bijjal and Basavanna. In the small space they put in the best of their vachik. Music was used effectively at a low volume with taste. One wished though there was enough light on the actors’ faces for the listeners to see their contextual expression.