Keya’s decision in Semicolon is a game-changer

Semicolon, in Hindi, at Ouroboros gives glimpses of the magic theatre is capable of. Watching it, just as performing it for the actors, becomes an intensely engaging experience. There are many factors that produce this experience. The theme of a human relationship with a bit of enigma about it interests everyone. Young viewers realize it concerns them. Viewers not so young look at it with objectivity and flashbacks on their past. The two young actors act it out with such spontaneity and involvement, and Outoboros with nearly no levels and distance between the performance and viewers creates such an intimate experience, the performance was seen last Sunday with exhilaration in the beginning and empathy at the end as though everything were happening in the family! 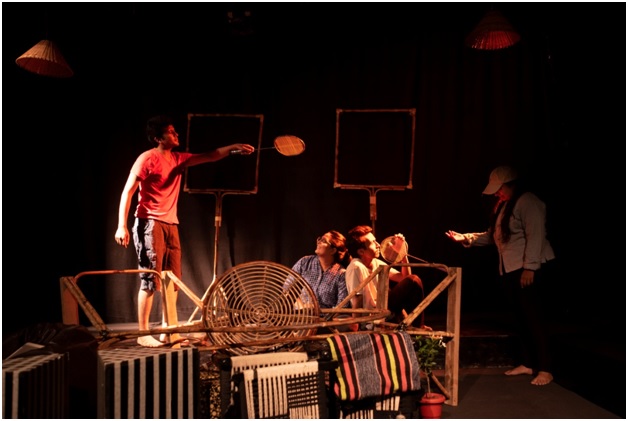 Online familiarity prompts Avinash and Keya to meet, propose and finally tie the nuptial knot. Subtle incompatibility gets felt in a short time. One is secretive, the other would like everything shared. One defensively tends to withdraw into a shell, the other tries to understand and be supportive. One tests patience, the other can be patient in trying circumstance. One acts on sudden impulses, the other would reassuringly like to hasten slowly. The charm is in finding incompatibility coming to surface in the modern idiom of the young, in dialogues crisp, incisive and unaffected with hints of the turmoil within. The second significant word of the popular ‘Project Semicolon’ in the west has prompted an original creative response to the writer of this play Ankit Gor. The two young persons are like two independent sentences united with this punctuation mark. The beauty is that the modern idiom of the young, not taken seriously, at times gets pithy and suggestive.

Sometimes the verbal power of a script gets highlighted with its stage version. The theme of convergence and divergence in the relationship comes across even through conversations. It gets a punch in the stage action in Ankit’s own direction. While interpreting the text visually, the director at times makes it distinctive with semiotic signs – audio-visual signs with their special signification – so well built in that their impact is felt and they themselves go unnoticed. A chirpy Keya, played by Denisha Ghumra with understanding, gradually sitting away from Avi, with uncomforting silence, also exiting a couple of times, for example. Her moving round in a circle, with Avi initially and without him later, is another instance. Pratik Rathod as Avi is good at getting swings of his mood, carefree initially gradually turning irascible, reflected on the face. Denisha, good at underplaying leaving much unsaid, wins viewers’ empathy. 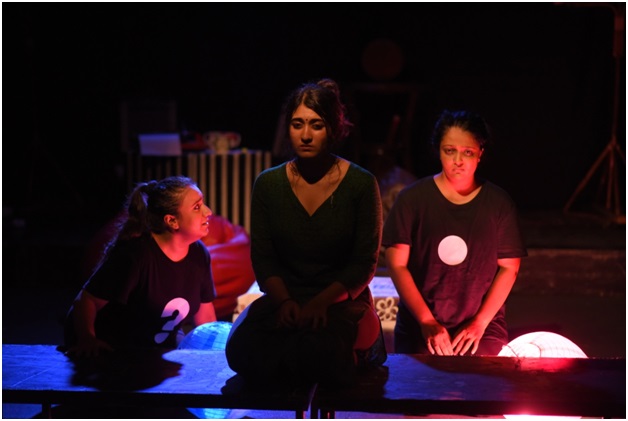 Scenes towards the end are more strongly semiotic. An inattentive Keya in the kitchen, Avi’s brother (Palkesh), a male, taking the initiative to help Keya in her work, his leaving two cells for connectivity, the sound of typing and the like are significant. At the third anniversary dinner, Avi snuffs out the light and burns pages of the book he is writing. The smell permeates the small auditorium and becomes a semiotic sign, unintended perhaps, for the relationship turning sour. Writer-director Ankit has Keya fully paint the face of Voice One who had suggested she paint her lips before anniversary dinner (Voice One is Saumya, Voice Two Aditi). In the very last wordless act, Keya is to wipe Voice One’s face clean.

The semiotic signs and modest psychological insights give the text, direction and character portrayal a welcome third dimension. The roots of Avi’s egoistic attitude go back to his childhood. Keya had heard her dad say that teamwork is the foundation of a successful relationship. And he had once said that when one’s distinctive identity is in danger the situation demands change (जब तुम्हारा होना न होना एक बराबर हो जाये तब बदलाव जरुरी हो जाता). The modern young wife with a thinking mind uncluttered with emotions takes a decision against conditioned social expectations. Denisha’s Keya emerges credible with these traits.

Lights (Maulikraj) and music (Margey) remain integral to the performance all through. Flashbacks are efficiently handled. Resourcefully, the sets change and everyone associated with the play works with professional seriousness. May this genre of dramatic performance take root in Gujarati theatre!