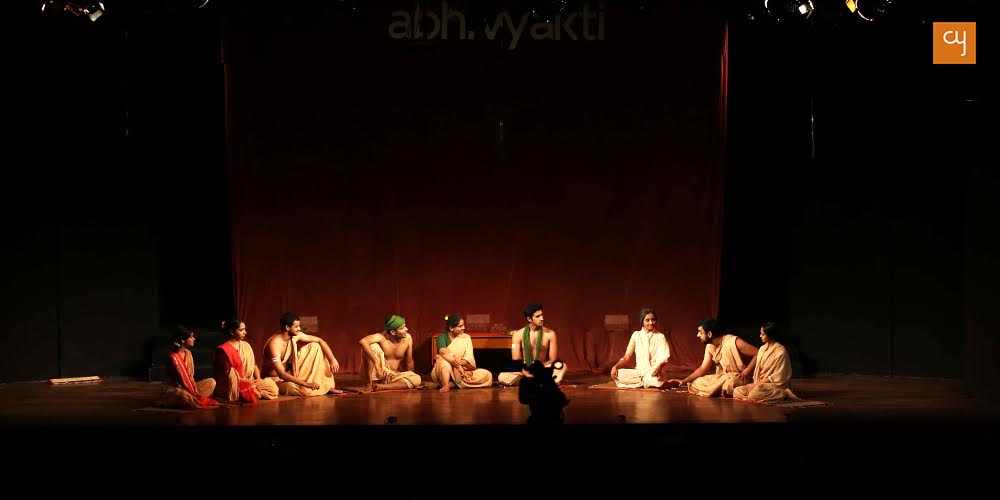 Abhivyakti in its second edition this year, alongside giving space, both in the literal and figurative sense, to upcoming local talent, invited Rakt Kalyan, Girish Karnad’s famous Kannada play Tale Danda (1989), also translated by him into English as Death by Beheading. Rakt Kalyan, in Ram Gopal Bajaj’s translation, is directed by Sunil Shanbag with students of Drama School Mumbai as actors. It was very appreciatively greeted by nearly a full house, which included a few theatre persons and spectators not necessarily spotted at local theatre events, at the renovated Dinesh Hall on 5th May. 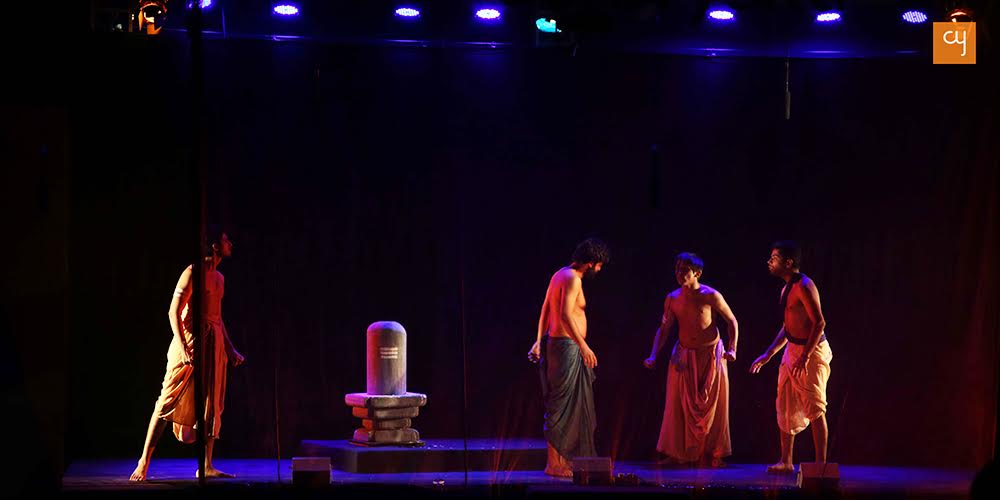 The viewers had an opportunity here to understand theatre as something more than popular entertainment. This play gets viewers to see an important caste-related social issue in historical and cultural perspectives. Basavanna, the central character in the play is an important historical person (1105-1168) in the Bhakti movement of our cultural history with an honourable place in the galaxy of saint poets like Kabir, Nanak and Namdev, all belonging to the ‘lowest’ class in the social hierarchy, who with a low profile challenged orthodoxy and attempted radical reforms. 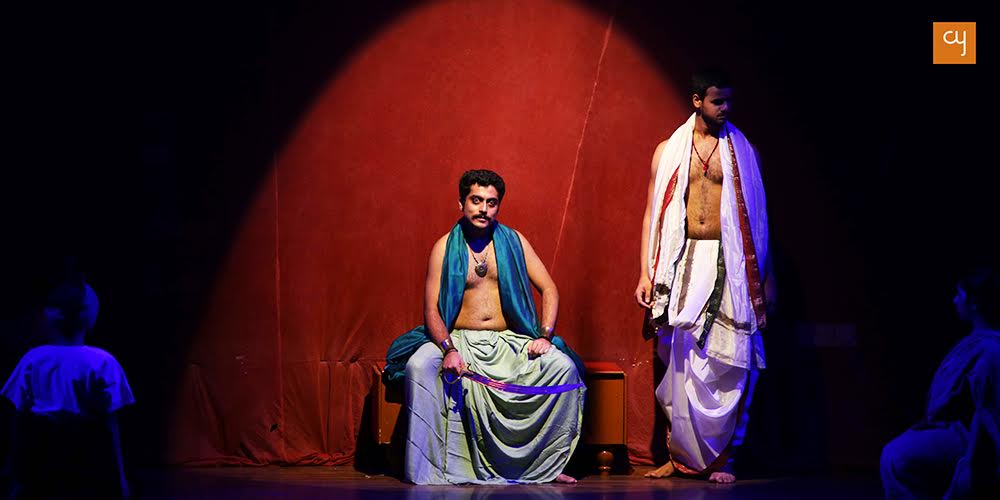 Basavana, a towering figure among poets, philosophers and mystics of his time, is a minister in the kingdom of King Bijjaila, another major character, who even with his warrior-like Kshatriya qualities is in the parental lineage a barber. He extends full support to Basavanna for his reforms, which include inter-caste marriage, equality of sexes, respect for every individual, and his simple language besides disapproval of idolatry, religious ritualism and a special status to Sanskrit. In Kalyan, he has a large following of Sharanas, a special new community, who believe in good deeds and not rights by birth. It is a pleasure seeing a tall and handsome Basavanna (Prajesh) and listening to his words of wisdom spoken in a well-modulated steady voice drawn from within. Though he does not emerge in clear contours, Bijjaila (Abhijeet) captures attention with his off-beat informal style and demeanour. 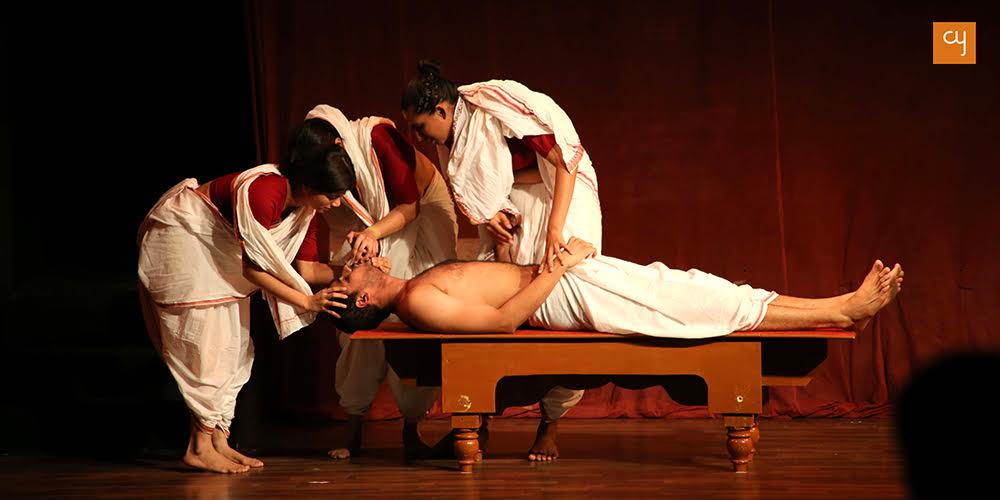 The play offers a good script to the budding actors under the guidance of a knowledgeable director for alert physical action prompted by the mind, voice modulations with sharply changing situations and scope for the difficult invisible action within the face expresses, for which Basavannna is the best example with Bijjaila next to him. It is a bare stage production and the costumes, not heavy and ornate, just signify the time and the characters. This deserves appreciation and at the same time makes it difficult for a spectator to visually remember the characters with their distinctive identity in a complex narrative. The play begins promisingly but leaves the impression in the second half that it needs a more careful finish. 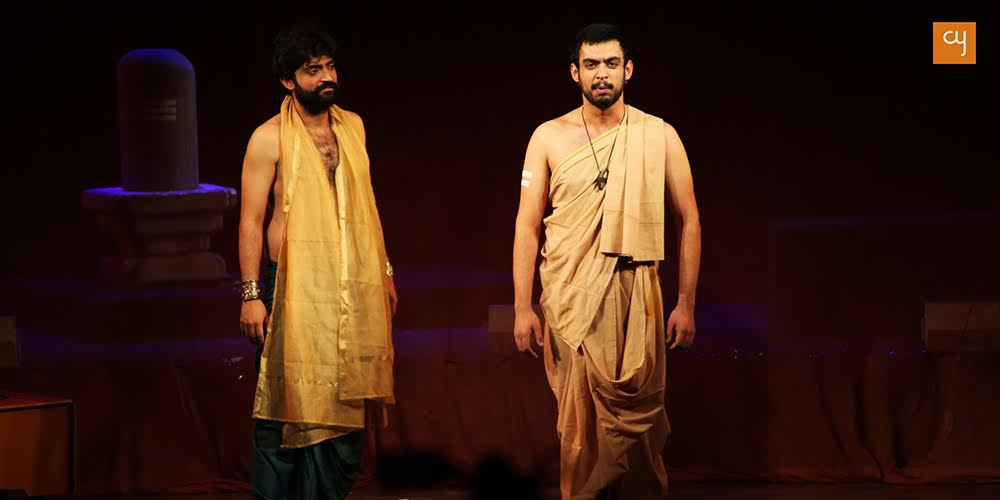 All said, the young actors and their director deserve a pat for the production of a play with a thematic significance, which is of topical value. At the centre of the dramatic happenings is the marriage of a Brahmin girl with a Chamar’s son. This plunges the otherwise peacefully thriving Kalyan, busy with creative pursuits, into a bloody turmoil. Written at a time when politically, and so socially, the mandir-mandal issue was raging in the country, the play brings the issue of caste centre stage. The playwright is criticized for having only highlighted it without offering a solution to it. The significance of the play is in powerfully highlighting the issue and its relevance even today.

The message it tellingly conveys to us all is that a static society stagnates. It needs to change to keep in tune with the changing time. For this desired change, those responsible to shape it need to help the society gradually evolve and not clog its passage to a higher state and retard its growth.