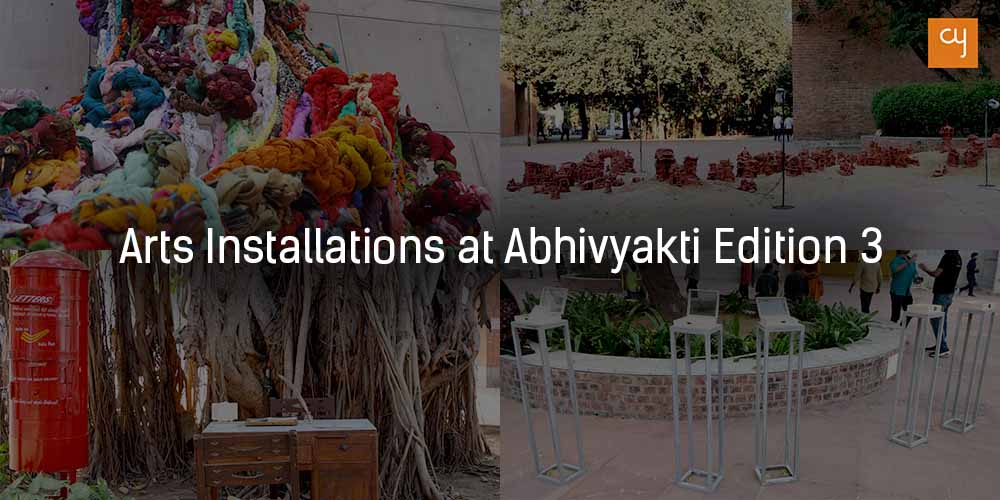 The Abhivyakti Visual Arts segment was seen to be having its fair share of keen visitors and interested onlookers as the Fest entered its second Day at the Knowledge Consortium of Gujarat (KCG) campus. We went around too through the varied and quality repertoire on show and spotted four more installations The Fleeting Winds by Al-Qawi Tazal Nanavati and Pramila Choudhary, The Untitled by Dipal Sisodia and Adhmaniyon na Meghadhanush by Labdhi Shah and Lovers & letters by Avni Sethi, all of which also formed the photo-stops for the indulging kind. And well in this age of digital cameras and social media presence who isn’t the indulging kind? 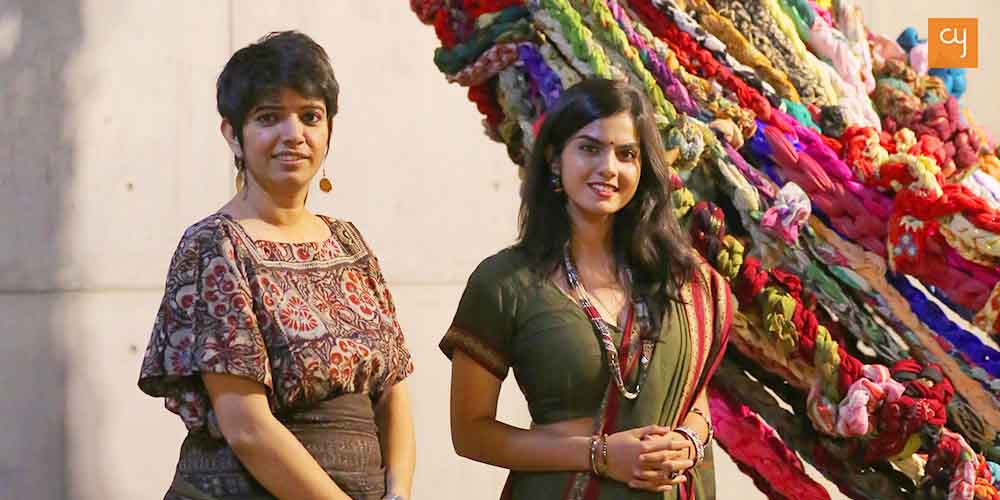 Pramila is the artist who returns a second time in succession after the Second edition of the Fest in 2019, but this time with her compatriot Al-Qawi from Mumbai and showcases a work created out of textile scrap again. The difference is that the scrap was cut out of old apparels collected by the duo from a wide circle of friends and acquaintances from their respective two cities. It’s this that called for a great deal of effort in collection, transportation to Ahmedabad and then processing all of it at Pramila’s home-turned-studio over weeks of toiling creativity!

A giant of fifty feet plus, this cluster of interlaced ropes works its way up diagonally to the second floor from its base laid near a tree cladding in the campus. Colourful in its overall appeal, the Fleeting Wings at the apparent level is about elusive victories and short-lived successes that we all encounter as we grow in life. At the deeper level, the Fleeting Wins is about tributes and memories of loved ones who leave us as both parties grow in life. More often it is the parents who leave us one by one but on occasions and by some ill luck others also depart creating a wide void in lives of the loved ones who the departed are survived by. Interestingly, the donors in some cases donated the apparels of their parents and others who passed away and thereby shared the deeper meaning of the installation wherein they kind of change form and live on! 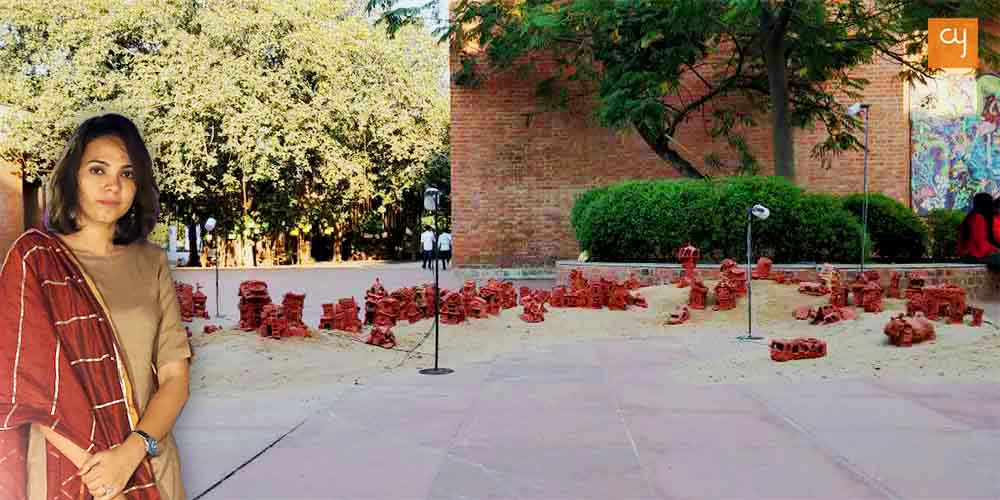 The Untitled by Dipal Sisodia is a work that is pretty clear about its thematic content relating to Ahmedabad old city that has now become The Heritage City. With scores of terracotta works created painstakingly and arranged in an order to achieve resemblance to the city icons like its teen darwaja, pols, the bird-feeder chabutaras, the groups of women enjoying their leisure chat in lanes and by-lanes, the auto-rickshaws, the Rathyatra and many more, this entire installation is laid out on a mound of sand on the floor. 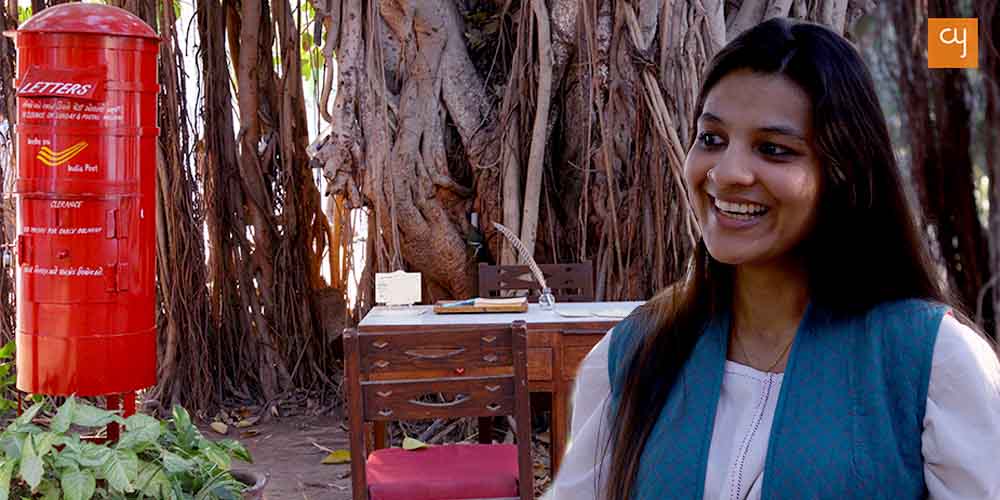 Labdhi Shah meets us with her Gyan under the Banyan Tree right near the entrance to the courtyard! It is here that she chose to locate her very interesting installation about postcards, the most economical instrument of easy communication from the bygone era. Interestingly, while the sweet young lady easily persuades visitors to sit down on a table to write postcards to their loved ones and create sweet emotional conversation, she has also managed an official letterbox being placed alongside for posting these open letters of the lovey-dovey kind! She has been able to persuade about 500 visitors over the two days that the Festival has seen. Now that’s a nice little way to generate love and bonding with the simple postcard that has almost lost its relevance in urban areas.

Labdhi’s installation idea reminds us of the Dakiya Project which was carried out with the same postcard campaigns in with people at large frequenting the gardens and parks of the city by Mansi and Anand, the CEPT student-volunteers of the Project some seven years ago! 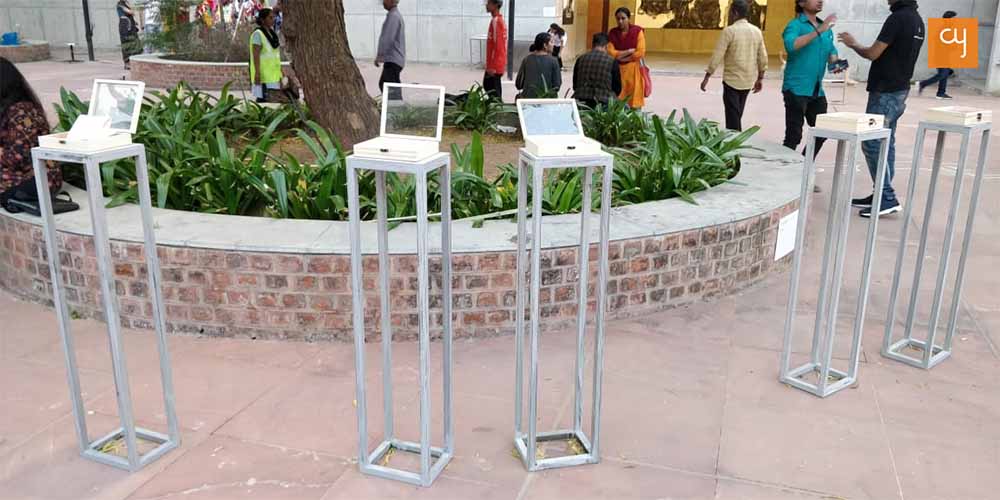 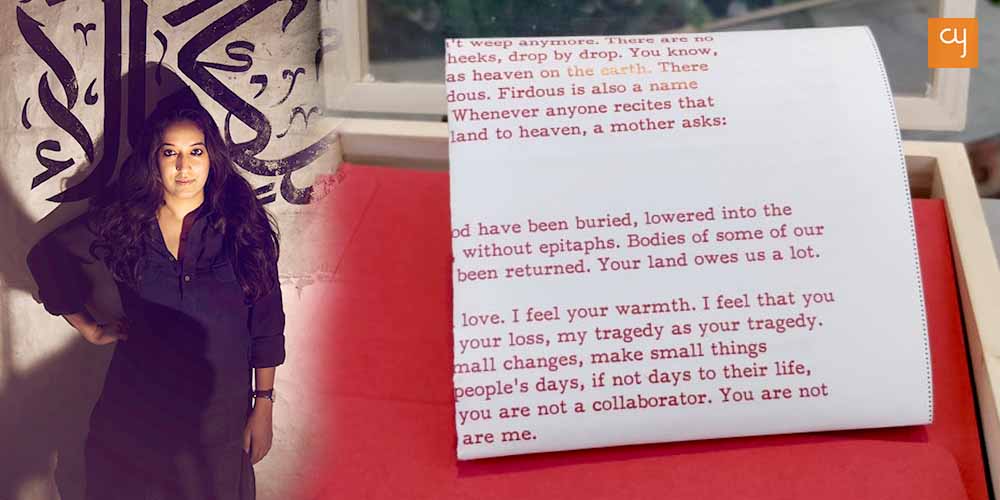 A similar installation Lovers & Letters comprising of letters written by volunteers has been pieced together by Avni Sethi of The Conflictorium of Ahmedabad. It’s some well-meaning people interested in ending turmoil, promoting harmony and peace that have responded to the call of the Conflictorium to write ‘Letters of Love’ for their known, unknown or imaginary recipients. It’s these letters placed in colourful open envelopes kept in turn in several transparent boxes laid out on pedestals that the visitors are encouraged to pick, read and carry to spread the message of love and peace.

We join to say Amen!