An Evening with a Taxi Driver: Experiments with plot sans the text

Experimentation is a double-edged sword and it can cut where it is not meant to! A play is also not a mere story without a definitive text. For, it is through this definiteness of the text that a play starts with, develops it’s plot, structure, characters and their conflicts in a certain premeditated direction; and ends with a climax, of course, not without the theatrics which completes the experience. But there are plays in the whole Indian theatre pantheon that have the capability to carry themselves essentially on their powerful text.

A play on stage that experiments without a definitive text or speech for the actors and is mounted only with a broad outline of its plot in its quest for freshness of approach and impromptu interaction among the actors, can suffer from loss of at least some of the above characteristic elements of drama and more. A director trying that experiment probably starts with some handicap when he puts the actors in the mould of a playwright leaving it to them to choose their words in the instant and also emote them in the same moment. They may shine or they may not depending upon their own exposure to linguistic skills. This then is the broad sense one got as a spectator after sitting through two runs of the play An Evening with a Taxi Driver. 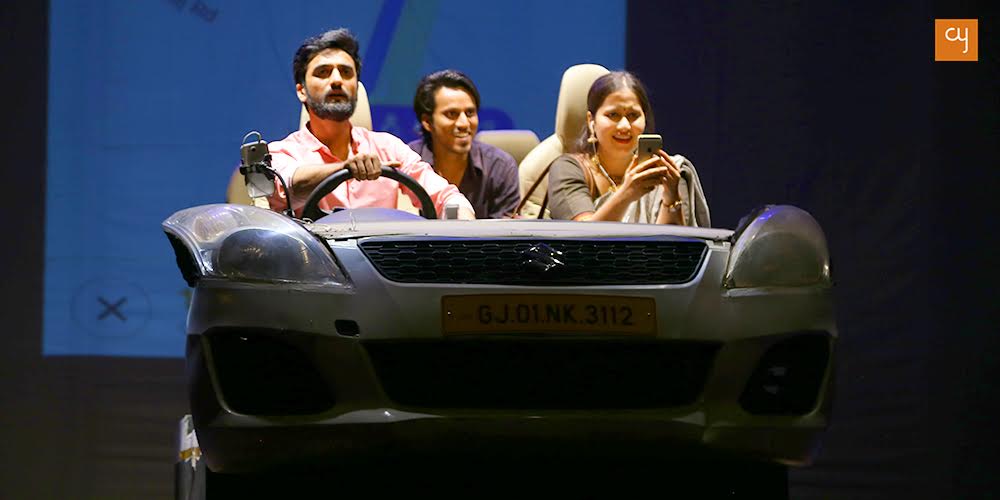 Directed by actor-director-trainer Abhinay Banker, who is known for his fine plays about Amrita Pritam, Sadat Hasan Manto and more, for the second edition of Abhivyakti, the arts Festival that closed on Sunday, the play was conceptualised as a performance without a definitive text. It only had a plot for the two protagonists – a female passenger and a taxi driver operating his car for a cab aggregator. Even the plot was modified for the second and third runs of the play. The two protagonists run into different situations given to them for three performances on three different days under the fest and they are expected to handle the plot with extemporaneous speech and dialogues.

The result for the experiment one may say was mixed. In its first show, the performance had an interplay of moral dilemma for the male protagonist even as the female protagonist was portrayed as a young estranged wife leaving her home for the airport in the former’s cab. The plot develops en route the drive to the airport whereby the driver is forced by his own circumstances to hold the lady as hostage for ransom, which money he must use to pay off a blackmailer to rescue his own sister! This storyline did have situations that were dramatic, brought in a conflict and a moral dilemma and a climax of sorts to clinch the play conclusively for the ordinary patron who still would expect a logical ending with a moralistic takeaway.

While the actors carried off the brief to a large extent, there was some overlapping in speech and phone calls as the actors’ cues could not be anticipated definitevely. The actions and reactions begged more conviction as they had to harmonise instant speech and it’s dramatic delivery on the spur of the moment. This conscious choice between a pre-rehearsed act and an act left to the literary and histrionic impulses of the actors on stage had its costs. 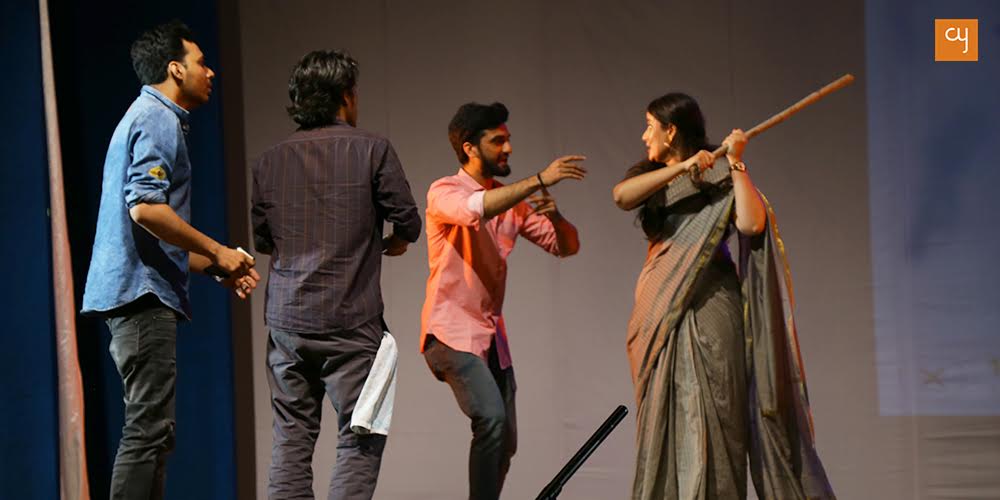 The third version that we saw on Saturday had a different plot in as much as the same driver ferries this time a middle-aged female who is leaving home for the airport for a flight to Delhi to visit a sister. The drive to the airport is uneventful in what is a departure from the first performance, except that the cab has to be taken back for a forgotten ID and she once alights the taxi in a bout of dementia but is eventually traced back and finally dropped off at the airport for her journey. In between, the two endeavour to recount bits and pieces of their respective lives which show their value systems and mental-emotional make up as two individuals from different strata of society who have come together by chance. There are characters along the start and through the play that slightly tend to complete the two slices of life on show.

Devoid of a conflict or climax, this linear interpretation of the two protagonists in the third version does not achieve much for a socially relevant content expected of a theatrical exercise. But yes it gives you the feel of the psychology of a (single) middle-aged woman, an experiment with the craft and some redemption of your time by way of sensitive acting by Nikita Sharma: by a reflection of some of the emotions that we carry within us day in and day out of our frail existence; and that they can run out of our systems just for nothing!

Sanjay Galsar, the other actor mostly evoked the comic streak in an expectant audience with his Gujarati speech. The play actually became bilingual for the other character relied on Hindi for her impromptu speech. One felt a moderation of Sanjay’s pace of speech might help. There was some breach of unity of time as the activity in the modified plot in Performance No 3 suggested day time while the title had to continue as “An evening with the Taxi Driver”. 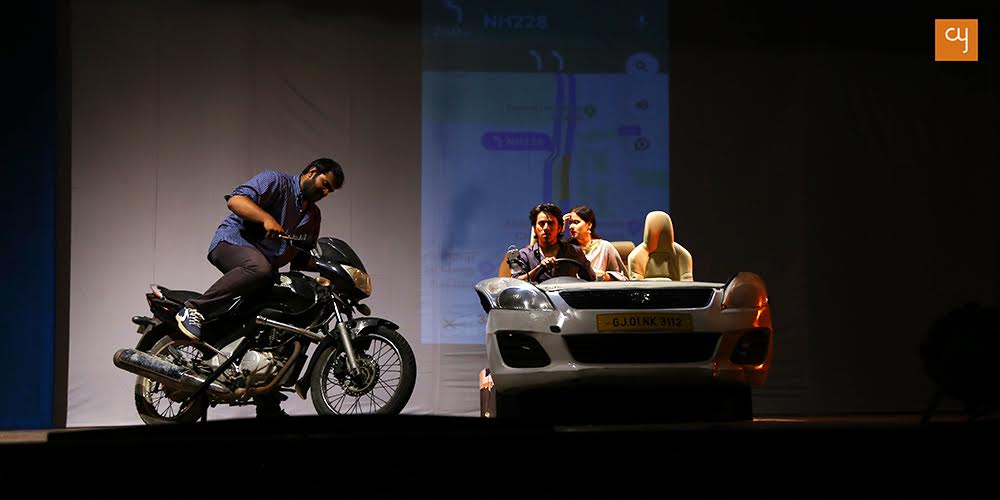 The play used a makeshift roofless car for its only major prop as all its activity flowed out of a “moving cab”. A projection of the car’s GPRS aided the feel of the car drive and the happenings on the go. Even as this use of the makeshift car apparently seemed a dictate of the situation of the realistic theatre, it also possibly forced the confines of action on stage. This leads us to the question of how best can productions cope with or find alternatives to the demands of realism vis-a-vis use of symbolism in terms of unusual props on stage.

The good thing is Director Abhinay showed the inclination to experiment even on the chance of a handicap; he and his team intend to continue their tryst with experiment beyond Abhivyakti which enabled it to fructify in the first place. We tend to agree, for, the spirit of experiment must not be curbed. And yet, the moot point would be where the experiment focuses and how far it can take the actors and the audience in terms of both content and craft.