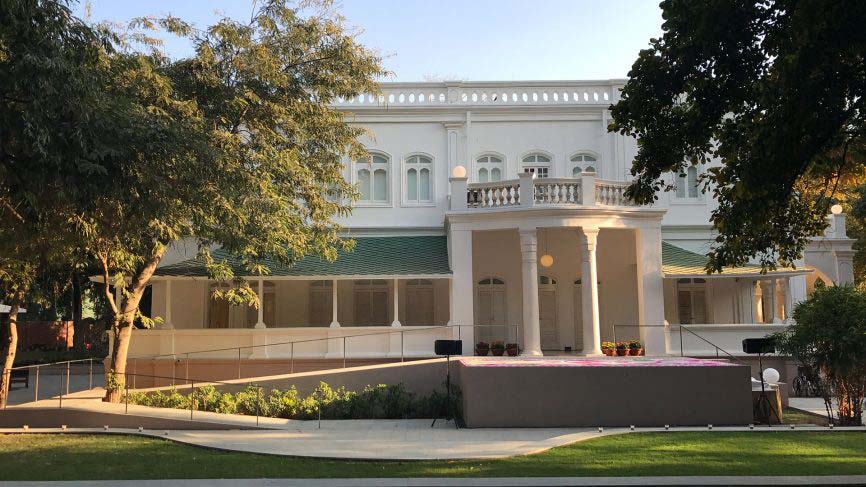 A dream world that Ahmedabad deserves! The Kasturbhai Lalbhai Museum, by Sanjay Lalbhai and Jayshree Lalbhai, houses a coming-together of art like never before in the city, that is open for all.

I could not detect a single moment when I didn’t feel absolutely fascinated here. Maintaining tranquillity right in the midst of the city, the Kasturbhai Lalbhai Museum (KLM), which has been housed in the Lalbhai family’s 112-year-old ancestral house, has been refurbished by architect Rahul Mehrotra into a majestic and welcoming public space. The antique design of the house has not been modified but is in fact upgraded without losing its historical essence. As told to Architectural Digest, Mehrotra shares his thought process, “Once the family decided that they wanted to add a public dimension to the property and share this heritage broadly, the question became how do you situate these public spaces without diluting the heritage values of the house”

The museum is brimming with antique artworks and was unlocked for public viewing in February 2017. The original building houses a permanent art display, while the backyard– known as the Claude Batley House, which was designed in 1930 – consists of a well-lit amphitheatre space that will soon be dedicated to performance art activities and events.

Before becoming inebriated by the lure of the grand premises and the unique art of the museum, do make sure to gaze at the beautiful, well-trimmed and colourful horticulture in the gardens. The debonair art historian Bhasha Mewar welcomed us with a beaming smile and took us on this magical excursion bursting with creativity. The foyer sections display a breath-taking combination of Mughal, Persian, Deccan and Arabic paintings, scriptures and sculptures which are antique and centuries old. They are preserved in individual cases designed by team of National Institute of Design, and among the many laudable parts of the museum is the presence of a tablet adjacent to the artwork which showcases the digital version of particular ancient scripture so that curious souls can absorb more of the displayed work. Deeper into the house, one sees hand drawn postcards made by students of Rabindranath Tagore, and painted folklores of Hindu mythological epics like Ramayana made on handmade paper, which transport you back to a golden era of art in India. The hallway also showcases art pieces comprising anecdotes about Lord Krishna, called as Krishna Leela, and Tibetan as well as Chinese artworks. Do not let your watchful eyes get glued on to the walls alone, since the carpets are also excellent pieces of art weaved by renowned designers.

Dainty, minimalistic paintings by Nasreen Mohamedi, an Indian painter famous for her line-based minimal drawings, Zarina Hashmi, Indian-born American artist and line artist Prabhavati Meppayil are displayed in the other part of the museum, alongside Sudarshan Shetty’s ceramic-wooden cup and saucers and Subodh Gupta’s life-sized painting of a tiffin box. Gupta is famous for using metal utensils as a subject or medium for his paintings and sculptures. Such a coming-together of artwork has never before been experienced under a single roof in Ahmedabad. It is the brainchild of Jayshree and Sanjay Lalbhai, and it is under the watchful eye of Jayshree, that the entire project has unfolded over a period of two years. It is admirable on their part to let the world view the art and antique collection of textile baron Kasturbhai Lalbhai, and to gift such an art dream to the city and its people, enveloped beautifully in the ancestral house.

The house has been converted into a museum very mindfully, since it still houses throbbing emotions within its concealed walls. For instance, delicate artifacts like ancient combs or makeup equipment have been intimately accompanied by a dressing mirror within a bedroom. A great deal of thought has been given to lend the viewer a true experience –a flavour of being exceptional and classy, yet flamboyant. A recent intervention of a glass structure on the terrace showcases invaluable artworks by the Bombay Progressive Artists’ Group, comprising the likes of S.H. Raza, F.N. Souza, M.F. Hussain and Tyeb Mehta, alongside works of contemporary legends like Bhupen Khakhar and Manjit Bawa. Witnessing these, alongside installations by Bharti Kher and paintings by Varunika Saraf, is like consuming millions of crystallised ideas at an instant. The curated tour is an enchanting bonus for visitors.

Since decades, the Lalbhai family has been an altruistic business family industriously striving to make the city a hub of creations. Let us see if, with this initiative, they have hinted or inspired the emergence of the Ahmedabad Biennale?