The End of An Era: Remembering the Bombay Progressive Artists’ Group. 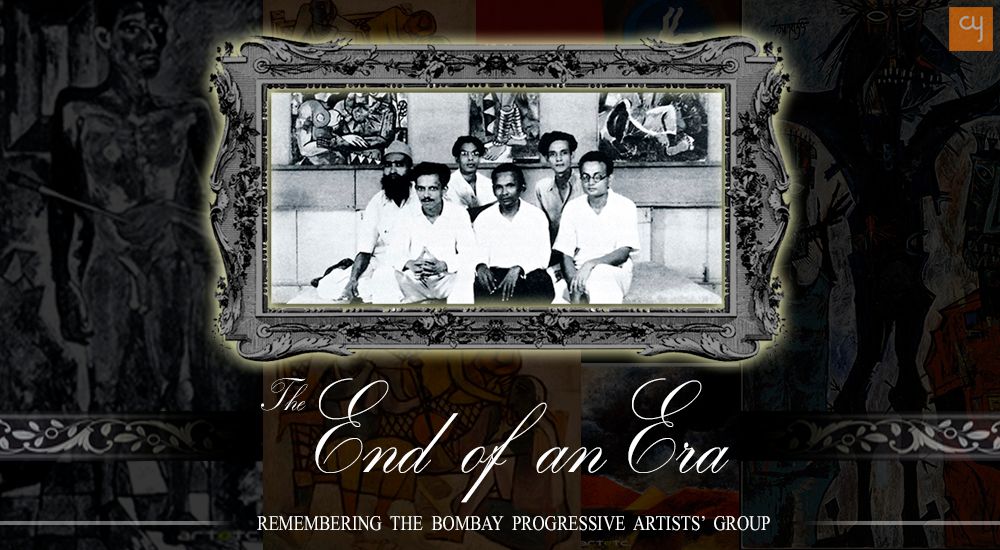 The Bombay Progressive Artists’ Group have shared a very special relationship with the city of Ahmedabad, giving widely to the nascent yet vibrant scene in the city and helping it grow as one of the strongest art precincts in the country. CY recollects…

The concept of Progressivism emerged from the Age of Enlightenment in Europe and found a new fervor when it hit the Industrial revolution. It brought about a wider understanding of the crucial relationship that man shared with industry, science, economic development, and social organization. The formation of the Bombay Progressive Artist’s Group in the manifesto is well aware of this condition and stressed on the idea that Art had to free itself from the shackles of sophistication and pretension, a stand that was not only radical but also unleashed a lot of backlash onto them.  Thus we can see from the manifesto of the Bombay Progressive group that they imbibed these ideas in their own practice to free the artistic community from the sophistication and pretension, in other words from the nationalistic colors of the Bengal School.

With the demise of S.H. Raza, the last bastion of the Bombay Progressive Artists’ Group, we have in many ways reached the end of an era – one that was marked by rebellion, aggression, faith, hopelessness and pure ambition. Do not get me wrong. This ambition I speak of was nothing short of excellent passion. What began as a post-independence movement soon formed a total rupture from the existing sensibilities in Indian Art. The Bombay Progressives Artists Group or PAG was made of six artists who in many ways were to define Modernism in India – F. N. Souza, S. H. Raza, M. F. Husain, K. H. Ara, H. A. Gade, and S. K. Bakre. Western influences with movements such as Post-Expressionism, Cubism, and Expressionism, assisted in a fresher exploration of subjects

The oldest member of the group Krishnaji Howlaji Ara (1914 – 1985) started his painting career when he was ‘discovered’ by Rudy von Leyden and then Walter Langhammer while he worked as a car cleaner for a Japanese company. His watercolor paintings depicted wine glasses, landscapes, still-lives, earthen pots, grapes, and pineapples. His watercolor and gouache paintings had a look of oil paintings like the folk and native tribal art styles. But he is known best for his paintings of the female nude in a naturalistic style

Francis Newton Souza (1924 – 2002) His repertoire of subjects cover still life, landscape, nudes and icons of Christianity, rendered boldly in a frenzied distortion of form, resembling the Art Brut movement. The loss of his father and sister very early on in his life played an important role in his life and works, so that they are grim and ridden with an ancient guilt, such that in all the landscapes, there is a feeling of desolation and of cities being deserted and of sexual tensions in male-female relationships to suggest exploitation and conflict.

Syed Haider Raza (1922-2016) evolved various styles of painting beginning with expressionistic landscapes to abstract ones, but with a fluidity of Indian watercolor painting. In the early 1940s, he moved to painting the ‘landscapes of the mind’. In1947, he lost his parents and his brothers moved to Pakistan during the Partition. Soon after, he moved to Paris, where the Western struck him modern painting styles and adopted expressionism and finally settling on the use of Tantricism in his paintings. He is best known for his painting of the Bindu, which represents the concentration of all energy. Other symbols include the serpents that have always represented fertility in ancient Hindu mythology, Tribhuja (triangle) representing the cosmic balance and the rudimentary lines that seem raw and unfinished since they give a feeling of motion and energy associated with tantra.

Maqbool Fida Hussain (1915-2011) is probably the best-known artist of the PAG as well as of Indian modern painting. Known as the Picasso of India, he introduced India to the most authentic flavor of cubism in his paintings of diverse moods and themes. He painted in series on themes such as Mother Teresa, Mahabharata, Ramayana, British Raj, Mahatma Gandhi, and Bharat Mata.

Hari Ambadas Gade (1917-2001) is considered to be one of the first abstract painters of post-independent India, often known as the ‘painter of painters’ because of his vibrant use of colors, which assume the primary focus, while subject matter becomes secondary. He painted landscapes, including those of Mumbai, Kerala, and Udaipur.

Sadanand Bakre (1920-2007) was the only sculptor of the Group. He employed techniques to meaningfully distort form and color in both his paintings and sculptures. He worked with metal shaped in creative angular formations that were inspired by emotion and experience.