Meet Dr Tejus Naik – the former surgeon who lives in a museum! 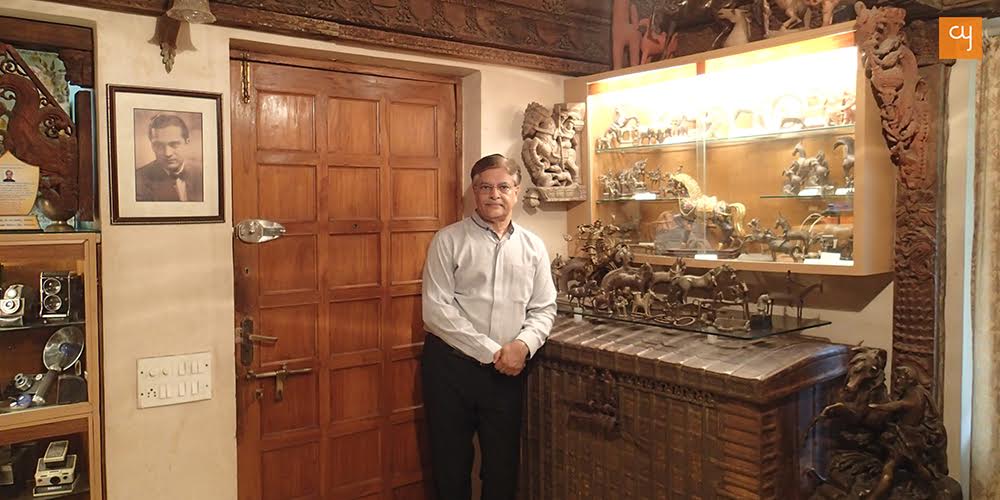 Imagine living inside a museum with more than 9000 antiques, collectables and artworks. That’s the life of Dr Tejus Naik, an established surgeon of Ahmedabad and grandson of Gulzarilal Nanda.

Soon into my interview with Dr Tejus Naik, a well-known Ahmedabad-based neonatal and paediatric surgeon, the conversation had taken on the tone of a deep conversation with a friend. Dr Naik is the founder of Medi Surge Multi Speciality Hospitals, which is now takeover by Healthcare Global (HCG) but I was not meeting him to discuss healthcare. The man’s life encompasses a parallel journey as a painter, collector, rangoli artist, naturalist, photographer and social worker. On a rainy evening like the day I met Dr Naik, there couldn’t have been a better place to sit and sip a warm cup of tea with him than his house-cum-museum, which hosts a whopping 9000 visible antiques, artefacts, collectables and artworks ranging across more than 45 subjects.

How did Dr Naik develop a fascination for amassing global treasures? He believes that “the world is divided into two kinds of people—collectors and non-collectors”!

Coins from the Post-Mauryan era to the Harry Potter epoch

Dr Naik’s passion for collection started with collecting coins, which is just one of his many hobbies. He explained,

“My father Dr Chotubhai Naik, the first cardiologist in Gujarat, was a well-travelled man. My fascination for collecting coins commenced when I got hold of my father’s small collection of European coins. Today, I have coins from all across the globe. By that, I mean that I have all the 185 types of coin currencies that are currently operating in more than 215 countries. But collecting foreign or world coins are just my side hobby, my real fascination lies in Indian coins.”

Dr Naik, who is the founder and former president of the Gujarat Coin Society, possesses what could just be an example of the first coin of India, Gandhara, which was used for trading purposes 2600 years ago during the post-Mauryan era. He also revealed that a hundred different one-rupee coins minted during the regime of Aurangzeb are kept in one of his cabinets.

Besides these ancient collections, Dr Naik also has a collection of misprinted currency notes and coins. He even has currency depicting popular culture, like coins inspired by the famous Lord of the Rings trilogy and the Harry Potter series. There is, in his collection, a talking Kennedy coin from Mongolia which says out loud one of President Kennedy’s famous speeches when pressed. These still comprise only a minuscule part of Dr Naik’s gigantic coin collection.

Besides coins, the paediatric surgeon has preserved a Bharat Ratna and Padma Vibhushan medal—which are India’s highest and second highest civilian awards—that belongs to his maternal grandfather Gulzarilal Nanda. Nanda was a significant political figure, freedom fighter and economist who served as India’s acting Prime Minister twice for short durations, after the deaths of Jawaharlal Nehru and Lal Bahadur Shastri. Dr Naik said that his grandpa had a successful practice as a solicitor in Allahabad but left everything behind to serve as an integral part of Mahatma Gandhi’s Indian Labour Movement.

Dr Naik has also preserved two handwritten letters written to his grandfather by Mahatma Gandhi that gave his grandfather feedback on his work during the Indian Labour Movement. The letters are accompanied by signatures of eminent personalities like Sonia Gandhi, Pt Jawaharlal Nehru, Rabindranath Tagore, APJ Abdul Kalam and various others.

Nanda spent his last days in Ahmedabad at Naik’s ancestral house on CG Road, and it was here that this ‘museum’ began as a single cupboard. The simple collection soon expanded into this massive host of collectables that defy categorisation today.

A passion for collecting and creating the visual arts

While talking about the collection, I noticed two serigraphs by MF Husain on the walls. It turns out that Dr Naik owns original artworks by masters like MF Husain, Rini Dhumal, Manu Parekh, MV Dhurandhar, Amit Ambalal and Nabibakhsh Mansoori. Not only does he have a fascination for collecting art, but he has also practised painting as a self-taught artist in the Realist style. In the past, Dr Naik has also been an exceptionally patient rangoli artist who would take10-12 hours to compose a single detailed and vivid rangoli!

Dr Naik’s wife Payal Naik, a ceramic and pottery enthusiast, shares with her husband a passion for being a naturalist. Together, the husband and wife have captured pictures of more than a thousand species of birds out of the total 1266 bird species in India. Dr Naik says,

“We are big-time nature lovers. If we go to Jim Corbett National Park, we are not sad if we missed witnessing a tiger but are ecstatic to click pictures of some of the most beautiful birds. We travel exhaustively in the wilderness but are yet to witness the 140 exotic bird species that are rarely visible.”

Not only does this hobby reveal Dr Naik’s passion for photography, but also his passion for collecting cameras. Dr Naik has more than 50 cameras, of which one is more than a century old. They are all preserved in his living room, which is filled with wooden carvings and sculptures that date more than a few hundred years.

Before I could enjoy a private tour of the museum—which has been visited by various enthusiasts from the ages of 8 to 80 years and remains open for all throughout the year—I asked Dr Naik about his community service initiatives. Dr Naik and his wife travel every year to various corners of Sabarkantha in North Gujarat, Kurukshetra and Himachal Pradesh to distribute to thousands of rural school-going children peppermints, apparels, toys, stationery and preventive medicines. They also treat the unwell children. He says, “In the past 9 years, we have medically examined roughly 3000 children in 28 villages, 7-8 times a year.” When asked about his motivation behind community service, he said,

“It’s a selfish motive because it eventually keeps me happy.”

A recipient of several awards and gold medals, Dr Naik no longer practises at a hospital. He only provides mentorship on the topic of surgery to budding doctors. He says, “I’ve taught around 4000 MBBS doctors till now, including top ones of Ahmedabad like Dr Keyur Parikh, Dr Himanshu Patel and Dr Tejas Patel.”

On the personal side, the man with multiple hobbies is far from a serious museum owner; Dr Naik enjoys watching Netflix and ‘chilling’ at home. He often advises his visitors that reading, listening to music, photography, film-viewing and travelling should be part of their regular chores and not just seen as hobbies. Visiting his museum has genuinely inspired me to take my recreational activities more seriously.

Though the museum is Dr Naik’s private house, you can pre-inform him about your arrival by emailing him at naiktejus@yahoo.co.in. Visit it to rekindle your soul’s hobby!