How the feisty Kalpana Chawla found her wings

Kalpana Chawla, the first woman astronaut of Indian origin, carved her own destiny from a small town to outer space, with her grit and determination. Read some little-known facts about this well-known astronaut.

We know of Kalpana Chawla as the first Indian-born woman to fly into space. But not much is known about her early days when she quietly fought against tradition and made her way to the skies. The journey from Karnal to the NASA spaceship Columbia was long and difficult. There were many little battles to be fought for a girl from a small town who had lofty dreams. She began by choosing her own name!

Let us learn some little-known facts about this well-known astronaut.

Kalpana was born in the small town of Karnal, to Banarsilal Chawla who had come from Pakistan during the partition with his extended family. Her mother Sanyogita Kharbanda was the daughter of a well-known physician. They already had two daughters Sunita and Deepa and a son Sanjay when their fourth child was born on March 17, 1961. She was affectionately called Monto at home. It was only when they went to Tagore Baal Niketan for her admission that they realised that she did not have a formal name for the school register! Her aunt suggested three options: Jyotsna, Kalpana and Sunaina. When asked by the Principal to choose one name, the little girl chose the name Kalpana for herself. This was an early start to taking her destiny into her own hands.

At a time when most girls in her school wore their hair in plaits, Kalpana chose to cut her hair short and, as there were no salons, she cut it herself! This can be seen in a group class photo on the school’s website. 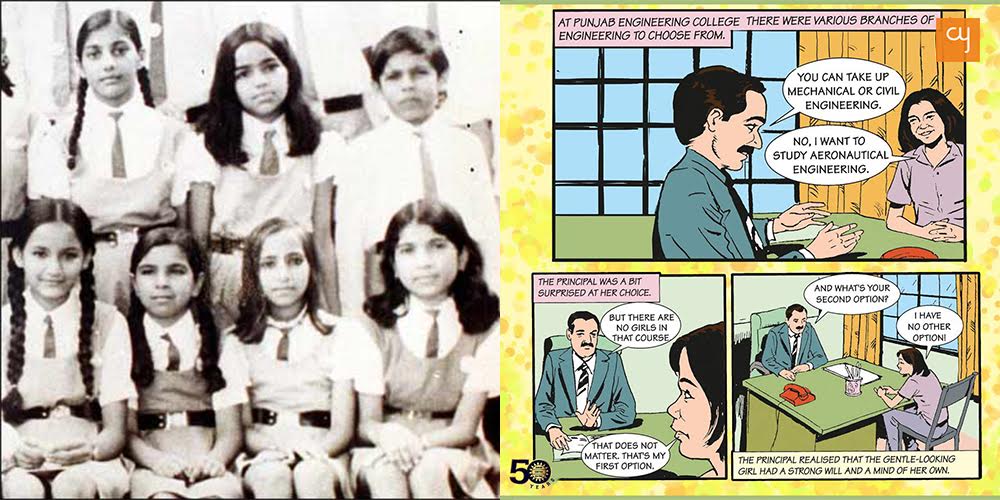 Kalpana often wore pants and a T-shirt at a time very few girls in town did so. She also participated in school dance performances and wrote poetry. She took part in sports but preferred playing dodgeball with the boys than badminton, which is what most girls played. She was the first woman to apply to the local flying club. From childhood, she was fascinated by planes and flights and chose to do a project and paper on the Mars Viking Mission in school. When Kalpana decided to go to Chandigarh to study Aeronautic Engineering at Punjab Engineering College, she was the first girl to leave her town to do so and was the only girl in her batch.

Kalpana’s fascination for planes reflected in everything. Her favourite film was Those Magnificent Men in their Flying Machines and she arranged for all her friends to see it by borrowing a video player and showing it in a local restaurant.

She stood third in her class in Aeronautic Engineering and decided to go to the US for further studies. She joined University of Texas, Arlington to study Aerospace Engineering in September 1982. Soon after, she looked for flying classes and met Jean Pierre Harrison, who was a flying instructor. They found that they had a lot in common: reading, music, hiking, scuba diving and flying. Soon they realised they were soulmates and got married in December 1983.

After Kalpana’s Masters studies, the couple moved to Colorado so that she could do her PhD. She also qualified for a flying license and took her mother for her first solo flight in 1987. She had a commercial pilot license for single and multiple engine land and seaplanes and gliders. After she got her PhD, they moved to California so that she could work on research on fluid dynamics at the Ames Research Centre. They bought their own small plane. However, there were some planes she could not fly, not because she was not competent, but because she was too short at 5 feet nothing!

At the age of 29, in 1990, she became a US citizen to pursue her dream and began to work at a simulation of a spaceship cockpit. At that time, NASA was looking for astronauts and Kalpana applied for the job. On first try, she did not make it, but she tried again in 1994 and was among the few chosen from a list of 3000 applicants. Now it was time for training at the Johnson Space centre at Houston. At the end of the rigorous training, she became an ASCAN, an astronaut candidate! In 1996, she was selected as the Mission Specialist and Prime Robotic Arm Operator for STS-87-space Transportation system and Columbia was the shuttle. The spacecraft took off on Oct 17, 1997 and they spent 15 days in space doing various experiments. They logged 6.5 million miles in 252 orbits around the earth in 376 hours and 34 minutes. Kalpana was very excited to be up in space.

“My goodness! How small this planet is. You feel like Alice in Wonderland. The colours of sunset and sunrise are awesome. The combination that you are weightless and looking out lends a story book feeling”. 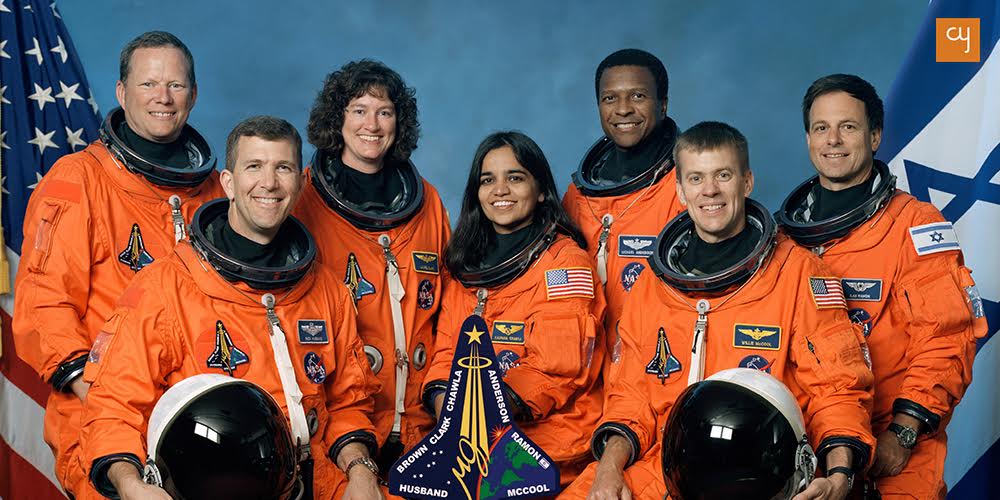 It is not usual for an astronaut to be selected to go to space in a second flight. Thanks to her grit, determination and hard work, Kalpana was selected as a Flight Engineer and Mission Specialist for her second mission on the STS-107 with a crew of 7. The other members were Rick D. Husband, William C. McCool, Michael P. Anderson, David M. Brown, Laurel B. Clark and Ilan Ramon. They took off on January 13, 2003. It was the 28th trip into space of the space shuttle Columbia. All astronauts are allowed to carry a personal kit and Kalpana chose to take along her favourite music—Abida Parveen, Ravi Shankar and Deep Purple, as well as some school mementoes. The astronauts worked round the clock doing experiments in space. They spent 15 days, 22 hours and 20 minutes in orbit. On February 1, 2003, the STS-171 was scheduled to re-enter earth’s atmosphere. But 16 minutes before landing time, the spacecraft broke apart into smithereens and the seven astronauts met a tragic end.

In death as in life, Kalpana chose space as her favourite domain.

Her words will continue to inspire others to follow their dreams. She said,

“I never thought while pursuing my studies, or doing anything else, about being a woman, or a person from a small city, or a different country. I pretty much had my dreams, like anybody else, and I followed them.”